THE ROLE OF LAB-ON-A-CHIP DEVICE IN HEALTH CARE

THE ROLE OF LAB-ON-A-CHIP DEVICE IN HEALTH CARE

ABSTRACT: Lab-on-a-chip (LOC), a scaled down microfluidic device for carrying out laboratory operations outside the scope of standard laboratories is a rather appealing development in the field of science and technology for the whole laboratory has been reduced to a small chip capable of carrying out various functions. Keeping to its word, micro, miniaturized volume samples and reagents has ebbed the time taken to analyze a reaction apart from the distinctive behaviour of liquids at the nano scale which has permitted substantial control of molecular interactions and concentrations. Also, amount of chemical waste and the cost of reagents has been minimised very drastically. This review article thus focuses on the importance of LOCs in the field of health care apart from its progress and incorporation in biotechnological researches over the past years

INTRODUCTION: Lab-on-a-chip (LOC) device, also known as micro-total-analytical system (microTAS) works on microfluidics, which is a method to control and manipulate fluid flows having length scales less than a millimetre. 1, 2 It is an interdisciplinary field dealing with extremely minute volumes of fluids, their control and behaviour, and their designing. 2-5 LOC scales down and enables integration of miniaturized laboratory functions onto a microprocessor chip using nanolitres to picolitres of fluid volume 2-4, 6 by combining a miniaturized sensing system (usually optical or electrochemical sensors) 2, fabrication techniques used by semiconductor industries and control concepts of fluid flow from microfluidics 4, 7, 8 (like channels, pumps, mixers and valves). 2 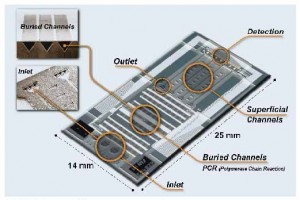 The Lab on Chip technology as seen in Fig. 1 was first contrived by Michael Widner at Ciba-Geigy (now Novartis) in the 1980s, the conceptual aspect taken into consideration only a decade later, in 1990 by Manz et al. 9 with a comprehensive work promulgated by Harrison et al. in 1992.10 Further development was carried out as a new field of discovery—microfluidics which too was established in the 1990s. 4 The aim behind developing such 'chips' was to provide controlled conditions for scientific measurements without a formal laboratory by automation and/or parallelization via microfluidic chips capable of handling extremely small sample volumes; to address the challenges faced by the formal laboratories during bioanalysis. 11

The stimulus for continued development of LOCs emerged from the Human Genome Project, carried out by DOE and National Institutes of Health (NIH) in collaboration for 13 years, from 1990 to 2003.4 Later on, the push to extend the growth of LOCs came from the aspiration for point-of-care medical diagnostics.12

Application of LOCs in biotechnology:

LOC devices are utilized as a part of a wide range of biomedical and other analytical applications including pathogen detection, expeditious clinical diagnosis, electrophoresis, protein and DNA analysis, forensic science, blood chemistry analysis and flow cytometry. 3 At present, the paramount importance of LOC is in the medical and biotechnological fields, with majority of the microfluidics applications being encountered in biotechnology research. As a matter of fact, some specialists contemplate this field as a biotechnology branch.4

Single-molecule approaches in biology have proved to be pivotal in studies ranging from the extraction of genetic information from DNA to the evaluation of physical properties of biological macromolecules. Customary single-molecule detection methods of macro-scale sample receptacles and mixers mostly limit their use to measuring equilibrium states only with the physiological concentrations posing a problem in the form of background noise. To address these technical issues and to extend the repertoire of single-molecule techniques microﬂuidic platforms have been investigated by many investigators. The basis of which is their high throughput abilities to perform single cell and single molecule manipulation owing to their exquisite liquid handling capability at the nanolitre to picolitre scale with precision, control, and reproducibility. Investigations have set forth higher resolution for long molecules than the standard pulsed-field gel electrophoresis with 100 times more agility.13

Legally and his team, in 2001 employed microfluidic devices in PCR to amplify and detect DNA templates at the single molecule level, examining the product with an integrated capillary electrophoresis detection system.14 This was followed by using a laminar mixing device to aid the measurement of the dynamics of protein folding at the single-molecule level by Lipman et al. 15

Microfluidic devices for cell culture studies play a part in drug development and biological researches, such as metabolism studies or drug toxicity, and stem cell differentiation studies. The microfluidic platforms which are microfabricated tools are gaining popularity for studying cellular biology as they allow precise control of the environment surrounding the individual cells., facilitating in vitro study of cell behaviour by providing tools for reproducing in vivo-like microenvironments and permitting nutrients to diffuse to nearby nutrient poor areas.16 Microfluidic chips used for cell culture system have microchannels on the cellular length scale (5-500 mm).17 Microfluidic technology has also been utilised to supply and transfer air, media, and buffers, while the cellular waste products are drained in a way quiet similar to the human circulatory system. Advances in lab-on-a-chip technology has even allowed highly controlled cellular micropatterning.16

Cell-free nucleic acids are found in circulating blood serving as potential markers for ailments, like strokes, tumour or cancer. At the time of pregnancy, detection of haemolytic disease or Down syndrome, as well as foetal sex determination or pregnancy confirmation can be carried out through non-invasive prenatal diagnosis and examination, by cell-free foetal (cff) DNA isolated from the maternal plasma instead of the traditional slab-gel instruments. The reason being, high risk of DNA contamination during DNA extraction from the gel apart from high sample consumption. Thus, glass LOC with Y-shaped extractor have proven to be more useful than the standard techniques.18

Separation of double-stranded and single-stranded DNA is obtained in a few minutes and at a low expense by making use of reusable glass chips. Reliable chip-based technique for rapid molecular diagnosis and detection of genetic variations, such as single-nucleotide conformation polymorphisms (SSCP) method of gene-scanning and mutations have successfully been adapted to chip-based solutions. The characteristics, low power consumption, short time analysis, sensitivity and simple real-time detection system, in addition to, dimunitive size and portability hence make these chips suitable for rapid and sensitive genetic diagnosis.19 The use of LOC for capillary gel electrophoresis is depicted in Fig. 2. 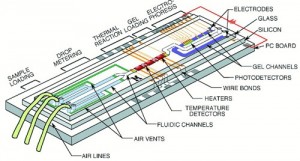 Capture of CTCs from the Blood of Cancer Patients:

Circulating tumour cells (CTCs) are exceedingly rare tumour cells in the circulation originating from the primary tumours and metastatic sites, first identified in 1869. Microfluidic methods have been tailored to exploit biological and/or physical differences between the background cells and the CTCs, enabling isolation in addition to capture of live rare cells so that further analysis can be performed using microscopic, cellular, or molecular techniques. It has also opened the doors for enhancement of point-of-care diagnostic CTC devices by combining isolation and detection methods in a single device. But since the dimensional features of chip design is small and fluid dynamics is quiet complex, it can interfere with the efficient, large scale capture of specific rare cells, making it a requisite to style the format and microfluidics such as to meet those specific requirements.20

Study of programmed cell death through single-cell analysis is widely used to evaluate the efficacy of chemotherapeutic agents used for controlling and treating cancer, as well as to study the heterogeneity of tumour cell responses to specific stress signals. An LOC instrumentation is one of the most innovative and cost-effective approaches being able to perform multivariate analysis of cells and particles using as small as 10 microlitres of sample. In contrast to the flow cytometer, a lab-on-a-chip can sample extensively less number of cells proving its importance while studying the outcome of patient derived cancer cells developed on exposure to therapeutic drugs, as these cells are often rare making it difficult to collect and then purify. 21

The combination of microfabrication-based technologies with cell biology has assisted to overcome the challenges in relation to stem cell identity, differentiation and expansion setting up the foundation to develop advanced in vitro diagnostic techniques capable of analyzing cell cultures under physiologically relevant conditions. The greatest benefit being that the state-of-the-art lab-on-a-chip platform allows for the precise regulation of culturing conditions, concurrently monitoring relevant parameters using embedded sensory systems.22

The novel LOC presents high-throughput preparation of mammalian cell samples for metabolic studies by rapid cell permeabilization and separation of sub-cellular components as cytoplasm and mitochondria, both of prime importance for cell metabolism. The chip is directly linked to an over pressurized bioreactor, to permit continuous harvest and manipulation of cells during cultivation. The microfluidic chip comprises two thermally decoupled temperature zones (one to ensure physiological conditions at 37 °C and the other for cell quenching at 4 °C). Cells are analysed employing five connected functional modules integrated chip within a continuous flow process, the prime ones being a chaotic advection “stirred” incubation channel for shortened residence time, a rapid split-and-recombine micromixer for biological system perturbation and chemical lysis, and a spiral channel for efficient particle separation and media exchange.23

The advantages, less sample handling, reduced sample and reagent consumption, and shorter analysis time obtained by miniaturization of analytical procedures as in LOCs lays a significant impact on diagnostic testing, thus making a notable contribution to the diagnosis of high prevalence and rare diseases by improving and simplifying several complex diagnostic procedures.24

Lab-on-a-Chip, a biomicrofluidic technology is emerging rapidly as a bioanalytical tools to revolutionize and miniaturize in situ embryo research. Regardless of substantial advancement, they still pose a difficulty requiring manual as well as excessive actuation and data acquisition, significantly reducing throughput and introducing operator-related analytical bias. However, integrating an embedded electronic interface can bring this technology a step closer to fully automated analytical systems.25

CONCLUSION: The LOC technology, though has already proved its mark as a significant tool for research and development, it is still viewed to be in its initial stages and more advancement in this technology still continues in many fields to meet the growing need for miniaturization, not only to diminish the expenses but also to develop it as a tool for green analytical chemistry so as to reduce the impact of research on the environment. The developing and under developed areas still do not benefit from this technology. The trend is however moving towards developing more multivariate LOC devices for comprehensive studies, integrating microfabrication and electronics which enables broader capabilities apart from miniaturization. It can be estimated that over a decade, biotechnological, medical and chemical analysis will move from room-sized laboratories to microchip based laboratories, housed in hand-held, portable readout devices.