INTRODUCTION: Respiratory tract infections are severe and most common types of infection treated by medical practitioners all over the world. Nosocomial pneumonia is the second most common infection, causing high morbidity and mortality and about 80% of nosocomial infections caused by Klebsiella pneumoniae are due to multidrug-resistant strains.

Recent data suggest that because of ESBLs and high-level amp C β-lactamase resistances, use of third-generation cephalosporins may be ineffective in many patients with nosocomial infections 2. EDTA is a polyamino carboxylic acid, a colorless water-soluble metallo-chelator and is known to have intrinsic antimicrobial activity.

Such activities include direct antimicrobial effects, potentiating the activity of other classes of antibiotics, detoxication, and neutralization of bacterial toxins / enzymes. One of the recognized modes of action of EDTA is to potentiate other antibiotics by having synergistic effect in combinational use with antibiotics 3.

Simple experiment was done for testing the effect of antibacterial / EDTA combination on isolates of Pseudomonas sp. significantly improves the efficiency of using such combination. This made the medical community to re-evaluate older agents with combinational therapy to other agents having synergistic effects. Combinational therapy most often refers to the simultaneous administration of two or more medications to treat the single disease 4. In the present study experimental nosocomial pneumonia induced by Klebsiella pneumoniae was established in S.D. rats and the effectiveness of EDTA / antibacterial (ceftriaxone with sulbactum) as a combinational therapy was studies.

Collection and Preservation of Klebsiella pneumoniae Culture Medium: The Culture medium of Klebsiella pneumoniae organisms were obtained from IMTECH (Institute of Microbial Technology), Chandigarh, India. A single isolated colony of bacterial strain were maintained on nutrient agar slant, nutrient agar plate was transferred to 50 ml nutrient broth and incubated at 37 °C for 18 h. Organism were harvested by Centrifugation  at 2500x for 20 min and washed to 3 - 4 times with sterile PBS (0.2 M, pH 7.2).

After pre (7th day) and post (14th day) treatment blood samples were collected for the estimation of blood parameters. Rats were sacrificed at the end of experiment; lung tissues were removed aseptically and lung tissue’s photograph were taken immediately for gross observation changes in each group. Lung tissue was sectioned into two halves, one half of lung was homogenized in 1ml normal saline and histological examination was done in other half part of lung tissue.

Induction of Nosocomial Pneumonia: For induction of nosocomial pneumonia in the rat model, bacterial dose 50 μl of log 106 CFU/ml and the method was employed for intranasal instillation of the bacterial inoculums adopted by Kumar et al., 2016 5. For induction of nosocomial pneumonia, bacterial dose was instilled into the nasal opening while holding the rat upright for 7 days twice daily (at 10.00 a.m. and 5.00 p.m.). Total 18 rats (six rats in each group) were infected and confirmed by increased body temperature, sneezing, coughing, labored movement (Walking with difficulties), cell count (WBC) and presence of bacterial count in blood sample. While six were treated with 0.9% NaCl only (Group I).

Preparation of Plasma and Lung Homogenate: Blood samples were collected by retro orbital vein In the sodium citrate (3.8%) containing vial and centrifuged at  4 °C at 6000 rpm for 15 min and plasma was collected for determine enzyme activity along with malonaldialdehyde level and biochemical parameters of a all groups. Lung tissue homogenates (10%) were prepared in chilled phosphate buffer - NaCl solution containing 0.15 mol/L NaCl in 0.05 mol/L, Na2HPO4-NaH2PO4 buffer (pH 7.2) and left for at least 1 h at 2 - 8 °C before measurement of MDA.

Determination of Antioxidant Enzymes Assay in Lung Homogenates: Lipid peroxidation measure-ment to determine the extent of lung tissue damage was assessed by the measurement of malonaldi-aldehyde (MDA) according to Verma et al., 2013 9.

Histopathological Analysis of Lung Tissue: Lungs were removed aseptically and collected in 10% buffered formalin saline for histological studies. The formalin fixed tissues were washed overnight in running tap water and dehydrated in ascending series of alcohol (70 - 100%) and cleared in benzene. For routine histopathology, the 4 - 5 micron thick tissue sections were cut from the paraffin embedded tissues and was stained with haematoxylin and eosin stain (H & E) (Luna 1968). Morphological changes were assessed by using routine light microscopy. 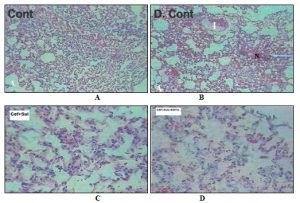 DISCUSSION: Klebsiella pneumoniae is a common pathogen that causes community-acquired pneumonia and nosocomial infections due to multidrug - resistant strains 10. It is observed that combination drug therapy is more effective due to their synergistic effect than individual drug therapy 11, 12. Ceftriaxone is antibiotic drug with potent bactericidal activity against a wide range of gram positive and gram negative bacteria and sulbactum is a β-lacatamase inhibitor with better broad spectrum activity against gram negative organisms 13, 14. Ethylene diamine tetra acetate (EDTA) a third vector with these two drugs as a combinational therapy has antioxidant and free radical scavenger properties that act against the microorganism for any of the biological role of metal dependent proteins which are associated to the maintenance of their transcription factors 15.

Due to the role of metal dependent protein, it enters into the cell membrane and opens the Ca+2 channel and increased the concentration of combination drug in the bacterial cell leading to inhibition of microbial cell transcription and death. EDTA with divalent metal ions and make them unavailable for the bacteria which are essential for cellular replication and growth 16.

K. pneumoniae causes acute inflammation and increases neutrophil activities with increased oxidative stress and various inflammatory biomarkers in Nosocomial pneumonia infection 17. In this study EDTA / Antibacterial combination showed better antibacterial synergistic efficacy against gram negative bacteria than antibacterial alone. Nosocomial pneumonia infection causes some alterations in hepatic and renal enzymes. This study shows, SGOT and SGPT levels were statistically increased in disease control group as compared with control group. Author in his study showed that, elevated levels of hepatic enzymes were frequently noted in nosocomial pneumonia infection in children 18. The elevated level of SGOT and SGPT may be associated with possible hepatocellular dysfunction due to severe inflammation and sepsis. Nikolic et al., 2006 has been reported the higher plasma activities of SGOT and SGPT and increased malonaldialdehyde level production in damage liver 19. The level of renalenzymes (total bilirubin, alkaline phosphatase, urea, uric acid and creatinine) were significantly increased in infected group as compared to control group. Many studied showed that the renal enzymes induced by vasoactive mediators triggered by bacterial components. Another author reported that in pneumonia infected immunocompetent rats have elevated of bilirubin and creatinine levels 20.

Due to respiratory infections by the distal airways, the phagocytic cells are activated and these activated cells release excess free radicals as a host defence against infection. Peroxidative lipid damage occurred whenever reactive oxygen free radicals are produced, so this damage may be reduced by antioxidant enzymes. Superoxide dismutase (SOD) and catalase are free radical scavenging enzymes that inhibits the generation of free radicals 21. EDTA controls free radical damage due to lipid peroxidation by serving as a powerful antioxidant 22.

In pneumonia the initiation, maintenance, and resolution of inflammation is dependent upon the complex network of pro-inflammatory and anti-inflammatory cytokines. This study showed that cytokines were significantly increased due to bacterial infections in diseased control group as compared with control group. Many studies have been showed that the cytokines is important factor for host defense against the invasive pathogen 23. The levels of TNF-α and IL-6 were decreased comparatively more in the combination drug of EDTA / Antibacterial treated group than anti-bacterial alone after seven days of  treatment in diseased condition MDA level increases significantly Table 2. Klebsiella pneumoniae causes oxidative stress in respiratory infection 24. During Klebsiella pneumoniea infection, the levels of antioxidant can be decreased due to generation of oxidative stress in the lung tissue.

Many studies have shown that Ceftriaxone + Sulbactum have neutrophils inhibition function and free radical scavenger property 16. Pneumonia infection is treated by the empirical therapy of antibiotics. A combination of antibiotics provides a better and broad spectrum of coverage than any single antibiotic alone. Combination therapy should be synergistic and provides an antibacterial spectrum greater than the sum of individual activities. Several studies reported that combination therapy have a better efficacy than monotherapy in nosocomial pneumonia infection 25.

CONCLUSION: To conclude, study showed that a novel of EDTA / antibacterial combination showed better efficacy in terms of antimicrobial and free radical scavenger property by inhibition of the free radical, which causes tissue injury and inflammatory response in nosocomial pneumonia infections in SD rats.

ACKNOWLEDGEMENT: We are thankful to management of Venus Medicine Research Centre for providing infrastructure for carrying out this study.