INTRODUCTION: Miconazole is an antifungal drug, in the market, it is known as Monistat; it is an antifungal medicine used for ringworm and yeast infections of the skin 1. This drug is used for ringworm of the body, feet (athlete's foot), and groin (jock itch) 1. The side effects of this drug include irritation or itchiness of the area in which it was applied. Use in pregnancy is believed to be safe for the baby 2. Miconazole is the imidazole of the medication family. The function of this drug to decrease the ability of fungi to make ergosterol 1. Miconazole was patented in 1968 and approved for medical use in 1971 3. It is on the World Health Organization's List of Essential Medicines, the most effective and safe medicines needed in a health system 4.

Computational Method: The Computational study was obtained by the DFT method with the hybrid functional B3LYP (A.D. Becke 1993) by using the 6-31G basis set. First, the drug is optimized then by optimized structure geometrical parameters are used for the calculation of energy (HOMO and LUMO), energy gap, molecular electrostatic potential (MESP) to characterize the stability of the molecule and reactive sites of the molecule.

Molecular Orbital Analysis: HOMO (highest occupied molecular orbital) is the highest energy orbital. The outermost electrons of orbital HOMO can act as an electron donor. LUMO is the innermost orbital. It is the lowest energy orbital. LUMO can act as electron acceptor 5. The transition of electrons of reacting species is due to an interaction between HOMO and LUMO; it is defined by FMO 6. More value of the energy of HOMO is showing the tendency of the molecule to donate electrons to an appropriate acceptor molecule of lower molecular orbital energy. The less values of energy of LUMO indicate more acceptances of electrons. The difference between the energy of HOMO and LUMO shows an important stability index of electronic transition. Low gap value indicates the higher electronic transition and vice versa. The energy of HOMO and LUMO are - 6.43227eV and -1.33826 eV respectively, and the energy gap (ΔE) is 5.09401 eV. The gap of energy shows the chemical activity of the compound. Analysis of Fig. 2 shows that the distribution of two energies HOMO and LUMO. We can see from Fig. 2 that the electron density of HOMO is mostly distributed over the -imidazole while in LUMO the charge density is mainly accumulated on dichlorophenyl ethyl. 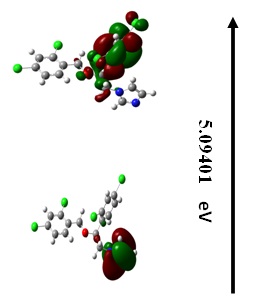 FIG. 2: THE ATOMIC ORBITAL COMPOSITIONS OF THE FRONTIER MOLECULAR ORBITAL (HOMO AND LUMO) FOR MICONAZOLE

Molecular Electrostatic Potential: MESP refers to the electronic density, and it is very useful for recognizing the electrophilic and nucleophilic attack as well as hydrogen-bonding interactions 7-8. To know the active sites for electrophilic and nucleophilic attack for Miconazole, MESP is calculated by applying the DFT/B3LYP method and 6-31G (d) basis set for the optimized geometry. The negative (red) part of molecular electrostatic potential (MESP) represents electrophilic and the positive (blue) part for nucleophilic reactivity (as shown in Fig. 3. It provides a pictorial method to recognize the relative polarity of a molecule and help as useful information to interpret hydrogen bonding, reactivity, and structure-activity relation-ship of molecules. It is the potential energy of a proton at a definite area nearby a molecule. Various values of the electrostatic potential at the surface of a molecule referred to the various colors. In brief, the attractive potential (or negative) arises in red-colored part, and those of repulsive (or positive) potential appear in blue. As can be seen in Fig. 3, there are two possible sites on the compound for an electrophilic attack. The negative part majorly over the Nitrogen atom of Imidazole ring. The positive part is located on the ethyl group attached Imidazole ring in a very small amount (site for nucleophilic attack). The maximum values of negative and positive parts are -6.81 × 10-2 a.u and 6.81 × 10-2 a.u, respectively. These results refer that the combined study of the structural and electronic features of a molecule is useful for recognizing the structure- performance relationship, thus allowing for the design of new and better heterocyclic drugs with applications.

FIG. 3: 3D PLOT OF THE MOLECULAR ELECTRO-STATIC POTENTIAL OF MICONAZOLE

Thermodynamical Analysis: Statistical thermo-dynamic functions mainly heat capacity and entropy were calculated for the molecule at varying temperatures (100 to 500 K) and summarized in Table 1. The correlation graph between these thermodynamic measurements and temperatures (T) are shown in Figs. (a)  and (b). The zero-point vibrational energy (ZPVEs), thermal energy, rotational constant, molar heat capacity, entropy, and enthalpy at room temperature for Miconazole were obtained and indexed in Table 2. It is obvious from our observations that the calculated ZPVE energy is lower in the B3LYP (177.60 kcal mol-1) than CAM-B3LYP 181.38 (kcal mol-1) method. However, the calculated molar heat and entropy were 85.548, 163.936, and 82.344, 161.192 cal mol-1 k-1 respectively at B3LYP and CAM-B3LYP/6-31G (d, p) hybrid functional.

A study by Ayers and Parr 9-10 has shown that the greater value of FF  gives information that attack is by soft reagents, and lesser value of FF gives information that attacked by hard reagents. It is calculated by the DFT method by using the B3LYP/6-31 G (d, p) basis set. With the use of Mulliken atomic charges of cationic and anionic states, local Fukui functions, local softness value, and local electrophilicity indices have been calculated using the following equation:

Where + and − signs show nucleophilic and electrophilic attack, respectively 11. Fukui functions, local softness values, and local electrophilicity for selected atomic sites in Miconazole have been listed in Table 3.

Mulliken Charges: Mulliken charges originate from the Mulliken population analysis. Effective atomic charge calculation plays a main role in the quantum mechanical calculations of molecular systems. Due to the change of atomic charges dipole moment, molecular polarizability, electronic parameter and refractivity of molecular systems can be calculated. Mulliken charges calculated by DFT at B3LYP /6-31G (d, p) and CAM B3LYP/6-31 basis set 12-13. It is calculated to describe the electron population of each atom and to see charge distributions over the molecule as listed in Table 4 and plotted in Fig. 5. 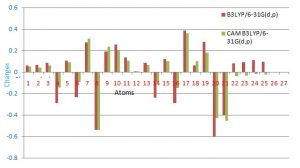 CONCLUSION: In this theoretical study analysis of geometries and electronic properties of Miconazole is performed using DFT/B3LYP method at a 6-31 G (d,p) basis set. The effect of the substituted group on the structure and electronic properties are studied. The stabilization energy and the calculated HOMO and LUMO energies indicated charge transfer in the molecule, which in turn indicated its bioactive properties. Thus, the theoretical study indicates that these molecules are polar and active molecule, and they may interact with its environment strongly. The indications of the theoretical study reveal useful information about the reactivity of such molecules and give good information about the active sites in the molecules and clarify the sites of molecules that undergo nucleophilic substitution or electrophilic substitution reactions.

ACKNOWLEDGEMENT: Authors are thankful to Head of Department of chemistry, Lucknow University, Lucknow for providing laboratory, Spectral, and computational Facilities.