ABSTRACT: Ulcerative colitis is an idiopathic chronic inflammatory disease of the colon for which a lot of treatment modalities are present, however, significant side effects are associated with them and there is a need for a search for other treatment options.  This study was aimed to investigate the therapeutic role of Doxycycline in experimentally induced colitis in rats. Animals were categorized into 5 groups; the control group undergoes no induction of UC, colitis group in which UC was induced and animals receive no treatment, the Doxycycline group that received Doxycycline and Sulfasalazine group that received Sulfasalazine. Each group was composed of 10 animals. After the completion of the one-month period of experiment, animals were sacrificed and the following measures were done: weight of colon, determination of the area of mucosal damage by mm2, histological scoring after hematoxylin and eosin stain together with MAC score and immunohistochemistry of IL-6, TNF-alpha, MPO, MDA, CD62, and ICAM1. The results revealed that Doxycycline was able to reduce the area of mucosal damage, colon weight, histological and Mac scores and immunohistochemical scores of inflammatory and oxidative markers, significantly in comparison with colitis group (P<0.05). Doxycycline was proved to be an effective adjuvant treatment for colitis through its, anti-inflammatory and the anti-oxidant activity.

INTRODUCTION:  “Inflammatory bowel disease (IBD) is a general term that includes chronic, idiopathic inflammatory disorders of the small intestine and colon”. The cause behind these disorders is still unclear, despite that, the cooperation among genetic factors, normal bowel flora and the immunereaction of the intestinal mucosa is suggested to result in these disorders 1, 2.

The two mainkinds of IBD are crohn’s disease and ulcerative colitis (UC). In UC the inflammation is predominant in the colon and that the inflammatory process affects the mucosa mainly and proceeds in an ascending fashion from the anal verge and extends proximally 3, 4. Several non-intestinal features are usually seen such as “erythema nodosum, pyoderma gang-renosum, uveitis, arthritis and primary sclerosing cholangitis”. Partial healing and exacerbation are typically seen in UC. The sin qua features of UC is that of bloody loose bowel and tenesmus. The goal of therapy is directed toward inducing clinical and histological remission at the time of relapse and keep the patient on maintenance therapy to extend remission period as much as possible.

Patients having mild to moderate illness are usually treated with 5-aminosalicylic medications, while, severe attacks may need hospitalization and intravenous steroid treatment 5, 6. If no improvement, then immunomodulating drugs, such as cyclosporine, are given 7. Surgical intervention is usually avoided unless the failure of medical treatment and or the availability of certain limited indications 8, 9.

“Sulfasalazine is a combination of 5-ASA (aminosalicylic acid) azo-bound to the antibiotic sulfapyridine. It is the 5-ASA component that is the therapeutically active compound and the sulfapyridine moiety that is the cause of many of the side effects” 10. Despite the fact that 5-ASA compounds are described to be free of hazard, toxicity has been reported. The most frequent adverse actions of 5-ASA agents are a facial pain, fever, dizziness, pain in the abdominal, rash and GI disturbances 11.  Other uncommon side effects include pericarditis, pulmonary toxicity, hepatitis, aplastic anemia, pancreatitis, thrombocytopenia and leucopenia 12. In addition to that, some patients will have worsening abdominal pain and diarrhea because of the hypersensitivity reaction to “5-aminosalicylate” 13.

So searching for other treatment options is an essential goal in the management of UC. A number of agents have been tested; however, controversial results were obtained 13. For that reason, we designed this study to explore the role of the macrolide antibiotic Doxycycline in experimentally induced colitis in rats 14.

MATERIALS AND METHODS: This experi-mental study was carried out to assess the effect of Doxycycline on acetic acid-induced colitis in rats. Methods used by previous authors were followed to induce colitis. Rate underwent obligate overnight fasting then a soft catheter was used and inserted to a level of about 8 cm away from the anal verge. One ml of 3 percent acetic acid was administered to each rat and rats were put in away to ensure enough period of contact between acetic acid and the colonic mucosa by maintaining their heads down for half a minute 20. Animals were categorized into 5 groups; the control group undergoes no induction of UC, colitis group in which UC was induced and animals receive no treatment, the Doxycycline group that received Doxycycline and Sulfasalazine group that received Sulfasalazine. Each group was composed of 10 animals. After the completion of the one-month period of experiment, animals were sacrificed and the following measures were done: weight of colon, determination of the area of mucosal damage by mm2, histological scoring after hematoxylin and eosin stain together with MAC score and immunohistochemistry of IL-6, TNF-alpha, MPO, MDA, CD62, and ICAM1. Immunohistochemistry was done according to the instruction of the providing company.

Statistical Analysis: Statistical analysis was carried out using SPSS version 23. Numeric variables were expressed as a median and inter-quartile range and the p-value was assessed using Mann Whitney U and Kruskal Wallis tests. The level of significance was considered at P≤ 0.05.

TABLE 1: MEDIAN AND INTERQUARTILE VALUES IN CONTROL AND STUDY GROUPS

FIG. 1: HISTOLOGICAL SECTION THROUGH COLONIC WALL SHOWING NORMAL MUCOSAL AND SUBMUCOSAL PATTERN WITH NO EVIDENCE OF INFLAMMATION (ARROWHEAD) AND PRESERVATION OF GOBLET CELLS (ARROW); A: 10X; B: 40 X; H AND E STAIN

FIG. 3: HISTOLOGICAL SECTION THROUGH COLONIC WALL SHOWING DOXYCYCLINE EFFECT IN WHICH THERE IS EVIDENCE OF MUCOSAL REGENERATION AND GLANDULAR FORMATION, LESS SEVERE INFLAMMATION AND GOBLET CELLS REGENERATION; A: 10X; B: 40 X; H AND E STAIN 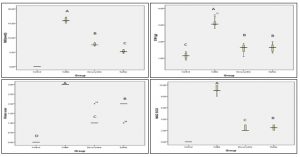 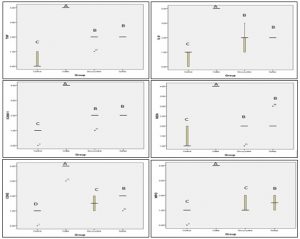 Myeloperoxidase (MPO) score of was significantly less in Doxycycline group compared to that of colitis group (P<0.05) and it more than that of Sulfasalazine (P<0.05), as shown in Table 1 and Fig. 5.

DISCUSSION: The present study showed that Doxycycline was able to produce gross changes in colon morphology indicative of reduced inflammation namely colonic weight and area of mucosal damage; however, these changes were not as efficient as Sulfasalazine. The present study also showed that Doxycycline was able to reduce the scores of microscopical changes; however, the effect of reducing MAC score was not as effective as that obtained by Sulfasalazine; but the histological score was nearly the same. Also in the current study, it was shown that the scores of pro-inflammatory markers (TNF-α and IL-6), were reduced by the same fraction in both Doxycycline and Sulfasalazine groups. And this was also applied to markers of oxidative stress (MDA, CD62, and MPO). Articles have admitted that the key players involved in the pathogenesis of IBDareIL-12, IL-23, IL-6 and tumor necrosis factor alpha (TNF-α). Treatment that targets these factors has shown partial success in controlling features of IBD 21, 22.

Nevertheless, around 40 percent of patients lack a clinically significant response to inhibitors of TNF- α; despite thatin some patient, the response may be significant in 50% 23, 24. Continuous search and budget are targeted toward finding new therapeutic strategies with respect to ulcerative colitis because of the significant morbidity associated with the disease. Animal models have been used extensively for the induction of experimental colitis to test the effect of new and invented treatment modalities in a hope of disclosing certain new aspects of the disease pathogenesis 25.

TNF-α is manufactured and secreted by a number of cells including polymorphonuclear neutrophils, lymphocytes and monocytes and is considered to be the prototype of cytokines 26, 27. It acts through stimulation and induction of the synthesis and release of other mediators of inflammation including ROS and it has the ability to up-regulate genes responsible for inflammation and oxidative stress 28. In addition, it shares and boosts certain effects of other cytokines and the induction of nuclear factor-κB 29. We believe that changes in colonic weight are a mirror to changes in expression of markers of inflammation by Doxycycline. A number of studies showed, in accordance with the finding of the present study, that Doxycycline possesses anti-inflammatory activities and can reduce significantly the level of pro-inflammatory cytokines IL-6 and TNF-alpha 15-17. It has been shown, in addition, by Wan et al., in 2015 that Doxycycline can significantly reduce I-CAM expression 18, in agreement with the findings of the present study. It has also been proved that Doxycycline possesses anti-oxidant effect 19.

CONCLUSION: A finding that supports the finding of the present study. By this way, Doxycycline was proved to be an effective adjuvant treatment for colitis through its, anti-inflammatory and anti-oxidant effects.

ACKNOWLEDGEMENT: The authors are grateful to extend special thanks to Dr. Abbas S. Dakhil College of Medicine for providing all kind of facilities for the successful completion of this work.

CONFLICT OF INTEREST: The authors have declared no conflicts of interest.