THEORETICAL STUDY OF THE ABSORPTION SPECTRA OF TRIAMTERENE

THEORETICAL STUDY OF THE ABSORPTION SPECTRA OF TRIAMTERENE

ABSTRACT: Time dependent density functional theory (TDDFT) calculations have been carried out to study the electronic structure and the UV absorption spectra of Triamterene. The UV spectra have been investigated with inclusion of solvent effect. The B3LYP functional with a 6-31G(d, p) basis sets have been used to compute absorption energies. The solvent effects have been described within the polarizable continuum model (PCM). The geometries are optimized using density functional theory (DFT) with B3LYP functional combined with 6-31G(d, p) basis sets. The vertical absorption energies both in gas phase and in polar solvents such as ethanol, methanol and water were computed. Red-shift of the absorption maximum in the polar solvents is discussed in terms of electrostatic interaction energy, oscillator strength and dipole moment

INTRODUCTION: Triamterene is a potassium-sparing diuretic (water pill) is used to treat fluid retention (edema) in people with congestive heart failure, cirrhosis of the liver, or a kidney condition called nephrotic syndrome. Triamterene is also used to treat edema caused by having too much aldosterone in body.[1] Triamterene is chemically 2,4,7 – triamino, 6-phenylpteridine with a molecular formula  C12H11N7 and molecular weight of  253.27 gm/mol. It is an official drug in British Pharmacopoeia 2.

Triamterene shows hyperkalemia as its major side effect. So, in order to counteract this effect it is used in combination with a Thiazide diuretic which counteracts the side effect of triamterene by its hypolkalemic effect 3, 4. On prolonged thiazide treatment plasma volume and ECF return to normal, but their hypotensive effect continues. This is probably due to reduced sensitivity of the vascular bed to the circulating catecholamine and angiotensin 5, 6. Combination of triamterene and benzthiazide are used in treatment of edema and hypertension 7, 8.

The density functional theory (DFT) 9 with B3LYP 10, 11 functional combined with 6-31G(d,p) 12 basis sets are most use full to optimize the geometries of molecules. The Time-Dependent Density Functional Theory (TDDFT) 13-15 has been used to simulate the electronic absorption spectra of free molecules. The calculated excitation energies are well agreed with experimental data for various compounds. Moreover, the inclusion of solvation effect via a PCM 16-19 model tends to reduce the excitation energies, due to a stabilization of the LUMO orbital. Thus, the location of the first absorption band and the energy of the HOMO orbital were used as parameters to evaluate the absorption maximum (lmax). The absorption maximum is one of the important parameter of the UV Spectro-photometric methods in pharmaceutical formulations especially in quantitative estimation.[20-25]

In this work, the absorption maxima of triamterene both in gas phase and in polar solvents ethanol, methanol and water are performed using the TDDFT method.

Computational Details: Triamterene was modeled using Avogadro 26. The DFT geometry optimization was carried out using B3LYP hybrid functional with 6-31G(d,p) basis sets. The effects of the solvents (ethanol, methanol and water) were added using the polarizable continuum model (PCM)   of solvation as implemented in the GAMESS-US software suit 27, 28. The optimized geometries are utilized to get the frontier orbitals and to carry out the time dependent density functional theory (TDDFT) studies. lmax of triamterene  is calculated at the level of TDDFT/6-31G(d,p). Molecular orbitals were plotted using wxMacMolPlt 29 and UV spectra were plotted using Gabedit 30.

RESULTS AND DISCUSSION: The optimized structure of the triamterene molecule has planar geometries, as can be seen in Fig. 1. The plane of benzene ring (C1-C6) is twisted interns of torsion angles by 41.11° (C2-C3-C12-C13) and 36.59° (C4-C3-C12-N15), respectively. The highest occupied molecular orbitals (HOMO) and lowest unoccupied molecular orbitals (LUMO) are shown in Fig. 2. Both HOMO and LUMO show π-character. LUMO are more or less delocalized over the entire molecule, where as HOMO are localized on the benzene ring (C1-C6). 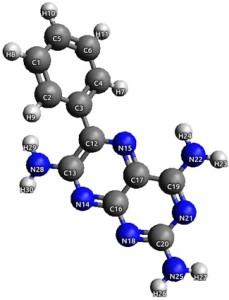 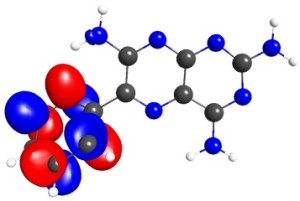 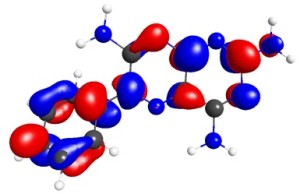 This is desirable and leads to the intra-molecular charge separation upon excitation (push-pull effect). The interaction energy between triamterene molecule and the polar solvent molecules in the fourth column of Table 1 are all negative.  This means that dipole moment of triamterene in polar solvents substantially increased in the excitation state. The change in electronic charge distribution between HOMO and LUMO is also indicative of a large dipole moment and is the possible reason for the large oscillator strength (fifth column of Table 1) for the HOMO → LUMO transition in polar solvents. The large dipole moment of triamterene molecule in the excited state is additionally stabilised by polar solvent molecules that leads to the decrease in the excitation energy and the corresponding red shift of the spectral maximum.

The simulated absorption spectra from real time TDDFT calculations for triamterene in gas phase and in polar solvents are shown in the Fig. 3.

Spectra show a similar profile in all phases; they present intense bands in polar solvents than in gas phase. The computational UV absorption spectra for triamterene in polar solvents (ethanol, methanol and water) show absorption energies of high intensities, corresponding to the lmax of 369.00, 369.33 and 369.77 nm, respectively.In ethanol, triamterene shows absorption peak at 369.00 nm, in excellent agreement with the experimental value (363.00 nm) 24. In isolated state, the spectrum presents the absorption peak at 350.63 nm.  It can also be observed that the lmax is nearly equal in polar solvents ethanol, methanol and water (Table 1 and Fig. 3.). 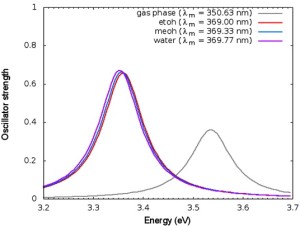 CONCLUSIONS: In this study detailed DFT/TDDFT calculation for triamterene in isolated state and in polar solvents ethanol, methanol and water via the PCM model has been carried out. From the results, some parameters such as excitation energy, oscillator strength, electrostatic interaction energy, dipole moment of triamterene have been chosen to evaluate lmax.