ABSTRACT: Entamoeba histolytic is a protozoan parasite which causes amoebiasis, about 50 million people are affected yearly, and it caused more than 100,000 deaths per year. The study investigates the therapeutic effect of ethanolic and aqueous Tamarindus indica leaves extracts on infected rats with Entamoeba histolytica. Twenty-one Rattus norvegicus rats were infected with Entamoeba histolytica and divided into seven groups (three rats in each group). Groups (1, 2, and 3) were treated with aqueous Tamarindus indica extracts at doses 125, 250, and 500 mg/kg respectively for ten days. Groups (4, 5 and 6) were treated with ethanolic extract of Tamarindus indica at doses 125, 250, and 500 mg/kg respectively for ten days. Group (7) was left untreated as a positive control group. The results showed a significant decrease at p≤0.05 in the numbers of parasite cell from the second day of treatment in all the groups treated with aqueous as well as ethanolic extract. This decrease gradually continued during the days of treatment until it reached zero on the last day of treatment for the dose of 500 mg/kg for both aqueous and ethanol extract. Histopathological study showed that Entamoeba histolytica causes mucosal damage, inflammation and necrosis for colon, while ethanolic extract of Tamarindus indica at dose 500 mg/kg repairs the parasite damage in comparison with a range of positive and negative control groups. Extracts of Tamarindus indica leaves indicated neither any toxic effect nor mortality up to the 1000 mg/kg.

INTRODUCTION: Approximately 50 million of the world populations are infected by E. histolytica and the reach a prevalence of 50% of the general population and it causes more than 100,000 deaths annually 1. Metronidazole is used for the treatment of E. histolytica infection; this drug is resisted by drug resistance from E. histolytica, 2 however, this drug has some unwanted side effects such as headaches, metallic taste, nausea, vomiting as well as neurotoxicity, this makes it unpleasant to be taken by patients 3.

E. histolytic has registered some levels of resistance to most of the medicines rendering them ineffective 4. In addition to that, the effective and safer antiprotozoal agents are urgently required 3. In developing countries, plants are considered as popular because their products are safe and widely available at low cost 5. This necessitates a search for a safer and effective alternative against E. histolytica. This study was performed to evaluate the efficacy of T. indica extracts against E. histolytica in rats and the study of histological changes after 10 days of treatment.

Collection and Identification of Plant: The leaves of T. indica were collected from the campus of Dr. Rafiq Zakaria College for Women. This plant was authenticated by herbarium of the Botany Department, Azad College, University of Dr. Babasaheb Ambedkar Marathwada, Aurangabad. The collected plant leaves were washed thoroughly with water to remove the adhering soil, dust, and debris. The leaves were dried in the shade at room temperature, then ground into powder. The powder was stored in an airtight container to protect the powder from light and air.

Preparation of Ethanolic Extract: Harborne method 6 was used to prepare ethanol extract by weighing 40 grams of dry plant powder, and  400 ml of ethanol were placed in extraction thimbles which were placed in a chamber of the Soxhlet apparatus at a temperature of 50-55 °C and extraction was continuous and carried out until the color disappeared. Then, the extract was transformed into Rotary evaporator. It was evaporated in the oven at 60 °C until it was, and the extract was weighted.

Preparation of Aqueous Extract: T. indica leaves were blended with water at a ratio of 1:10 (T. indica leaves: distilled water). The mixture was put on a magnetic stirrer for 24 h. It was first filtered with four layers of gauze cloth through a Buchner funnel, and then centrifuged at 3500 rpm for 10 min, the supernatant was put in the oven at 60 °C for drying. The dried mass was weighted.

a = Difference between two successive doses of the administered extract.

b = Average number of dead rats in two successive doses.

Macroscopic Examination: The stool samples were examined with naked eyes before the microscopical examination for, color, consistent and bloody mucus.

Microscopic Examination: All stool samples were examined microscopically by direct wet mount method with normal saline 0.85% and Lugol's Iodine stain under high power (10x) and (40x) for detection of the trophozoite and cyst stage of E. histolytica 8.

Experimental Animals: Twenty-four albino rats (Rattus norvegicus) of both sexes male and female (3-3.5 months old) weighing (200-220g), were used for the experiment. Their stool was examined before the beginning of the experiment to make sure that the rats were free from any intestinal parasites. The rats were maintained under proper environmental conditions, i.e., temperature 25 ± 2 ºC and humidity 50 ± 5% with a 12 h light and dark period. They were housed in polypropylene shoebox type cages with stainless steel grill top, bedded without saw dust. The rats were provided with pelleted diet and water. Twenty-one of them were infected by oral administration (17 × 103 cell/ml) of E. histolytica obtained from the stool. Three rats were kept at the same environmental conditions as the negative control.

After 7-10 days, the feces of each rat was examined. All the infected rats kept in a separate cage and divided into seven groups (three rats in each group). Groups (1, 2 and 3) were administered with aqueous T. indica extract at doses 125, 250 and 500 mg/kg respectively for ten days, while groups (4, 5 and 6) were administered with ethanolic T. indica extract at doses 125, 250 and 500 mg/kg respectively for ten days. The group (7) was infected with the parasite, untreated with plant extracts, and considered as the positive control, in addition to that negative control group which was non-infected with the parasite and untreated with plant extract. The feces of all rats from the first day to last day of treatment were collected and examined daily by light microscopy. After the screening of the slides, the number of E. histolytica was counted by using hemocytometer. The effect of ethanolic and aqueous T. indica extract was determined through parasites account number (by eosin stain) to obtain the number of parasite per gram of feces. It was calculated according to the following formula: 9

N: Number of the parasite in 1g of feces

S: Counted number of the parasite in a hemocytometer

At the end of the experiment, rats were sacrificed, and the colon was removed from each rat, fixed in formalin 10% for histopathological study 10.

Statistical Analysis: The results of the present study were analyzed by GenStat 5.2 by using general treatment structure (no blocking), factorial experiment, with 3 replications. The data were expressed as the mean deviation. Least significant different test (LSD) was used to test the difference between means (groups) at P≤0.05 and was considered significant.

Acute Toxicity Study (LD50): Administration of the T. indica extract in both treated groups showed no physical changes in their appearances and signs of toxicity at 125, 250, 500, 750 and 1000 mg/kg body weight of both ethanolic and aqueous extracts of T. indica. 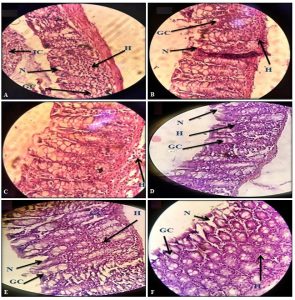 DISCUSSION: Due to the resistance of E. histolytica strain against the metronidazole, there is a great need for the development of new, effective, and safe medication for the treatment of amoebiasis.  It was clear from this study that the extract of T. indica had reduced the numbers of E. histolytica increased proportionally with the increase of the doses, it was the highest when dose 500 mg/kg used Table 1. In contrast, the infected control rats increase in E. histolytica numbers. The inhibition activity by ethanolic and aqueous T. indica extract against E. histolytica could be a result of the phytochemicals present in T. indica. T. indica contains active constituents such as alkaloids, phenols, tannins, flavonoids, glycosides and resins 11.

These compounds eliminate E. histolytica parasite inside the large intestine and therefore these substances inhibiting E. histolytica parasite and preventing it from dividing and multiplying within the large intestine cavities. Thus, active constituent present in the T. indica stops parasite from causing pathogenicity and severe histological changes in the large intestine cavities, especially in the colon. Where alkaloids break down the cell membrane of E. histolytica which causes to the exodus of the cell contents (proteins and fats), as well as interfere with DNA of E. histolytica and lead to the death of E. histolyttica 12. While tannins are inhibiting the enzymes and transport proteins that are located on the cell membrane 13. Also, tannins and phenols precipitate proteins through the formation of hydrogen bonds between the groups of hydroxyl phenols, nitrogen compounds, and proteins, leading to inhibiting of enzymes in the parasite. The T. indica extract contains high levels of oxalic acid, ascorbic acid and, particularly, a tartaric acid, 14 which creates an unsuitable environment for the growth of E. histolytica.

Moreover, T. indica possesses flavonoids, which protect tissues against from cellular damage of E. histolytica toxins 25. T. indica extract indicated neither any toxic effect nor mortality in white albino rats (Rattus norvegicus) up to the 1000 mg/kg agree with report 17.

ACKNOWLEDGEMENT: The authors are thankful the officials in Dr. Rafiq Zakaria College for Women, Aurangabad for providing facility to work.

ETHICS APPROVAL: Institutional guidelines for the care and use of animals were followed. All procedures performed in the study involving animals were by the ethical standards of the institution or practice at which the study was conducted date 16/08/2018.