THERAPEUTIC POTENTIAL AND CHARACTERIZATION OF SENNA ALATA: AN ETHANO-MEDICINAL PLANT

THERAPEUTIC POTENTIAL AND CHARACTERIZATION OF SENNA ALATA: AN ETHANO-MEDICINAL PLANT

ABSTRACT: Senna alata is an effective novel pharmaceutical medicinal plant. The hot extraction method was used to prepare methanol and ethanol extracts of leaves. The extracts were further evaluated to study Antimicrobial potential, phytochemical analysis, FTIR, and Antioxidant activity. The FTIR analysis showed various functional groups that served as secondary metabolites and responsible for antimicrobial activity. The antimicrobial activity of the extract may be due to the presence of secondary metabolites like alkaloids, terpenoids, phenols, saponins, flavonoids, glycosides and tannins. The Senna alata leaves were evaluated for antimicrobial activity against clinically important bacterial strains such as E. coli, B. cereus, B. subtilis, S. aureus, P. aeruginosa, P. fluorescens, and fungi strain namely A. niger by agar well diffusion method. The ethanolic extract of the leaves of Senna alata showed the highest antioxidant activity. S. alata has a great antimicrobial ability which   needs to be intensively discussed further.

INTRODUCTION: Plants have played an important role in human lives. Since, ancient times, about 80% of the world’s population depends solely on traditional remedies for their health care needs. The 7000-8000 plant species are used today because of the presence of some biologically active and naturally occurring phytochemicals present in them, which protect them from pollution, stress, and drought, as well as pathogenic microorganisms. The herbal medicines are safer and more effective 1. In tracking down new antimicrobial compounds from plants, the world’s researchers still have the thrust.

Senna alata, a traditional medicinal plant used for this study, has been very successful in many human ailments and is involved in the therapeutic of several forms of skin infections, intestinal para-sitosis, syphilis and haemorrhage 2. Senna alata (previously named Cassia alata) is a medicinal plant of the Leguminosae family. It has many common names such as Candle bush, Emperor Candlestick, Christmas candle, Acapulo, Ringworm bush and Calabra bush.

It is a shrub with usually an average height of between 1 and 5 meters and has horizontally spread branches. Its leaves are par pinnate of between 30 to 60 cm long and consisting of 8 to 20 pairs of leaflets. Each leaflet is oblong or elliptic-oblong and rounded at both ends. Its flowers are dense in auxiliary racemes, about 20 to 50 cm long and 3 to 4 cm broad. The inflorescence looks like a yellow candle. The plant fruits are thick, flattened with wings and glabrous pods 3.

Plants are considered to be an essential source of secondary metabolites, primarily phenolic com-pounds such as fistucacidin, bioflavonoids, triflavonioids, rhein glucosides, sennosi de A and B, chrysophenol and physionom  isolated from leaves Kaempferol, tetramer of leucopelargonidine with free glycol complex, bianthraquinone glycoside, rhein, fistulin, alkaloids, flowers triterpenes and bark oxyanthraquinone and dihydroxyanthraquinone from the bark 4. S. alata has a high therapeutic value as an antipyretic, analgesic, antioxidant and anti-inflammatory, hypoglycaemic. It has been used in the treatment of various disorders such as leucoderma, rheumatism, skin diseases, tuberculosis, eye and liver ailments 4, 5. The bioactivity of the alcoholic extracts of S. alata leaves has been reported to have fungistatic activity against some mycotic organisms such as T. mentagrophytes, Microsporum gypseum and Epidermophyton floccosum 5.

Polyphenolic compounds tend to be active free radical scavengers and their ability to serve as antioxidants depends primarily on their chemical structure, their capacity to donate/accept electrons, thus delocalizing the unpaired electron inside the aromatic structure and the polyphenols are commonly categorized into two categories: flavonoids and phenolic acids 7.

Collection of Plant Material: The fresh, disease-free leaves of S. alata were collected from different locations of Nashik city, Maharashtra, India. The authentification of the plant material was confirmed in Dept. of Botany K. R. T. Arts, B. H. Commerce and A.M. College, Nashik.  The plant material was first washed under running tap water and then in sterilized water. The leaves were shade dried in a dark room. The dried leaves were then homogenized using mortal and pestle into a fine powder and stored in an airtight glass container at 4 ºC until future use.

Preparation of Plant Extracts: The twenty-five gram of dried powder of S. alata leaves was taken into a cotton thimble separately and extracted with 250 ml of solvents of Methanol and Ethanol using soxhlet apparatus for 6-8 h. The solvent was then evaporated to dryness using a rotary vacuum evaporator to obtain only the dried extract. The final quantity of the extracts was measured, and double dilution method was used for the preparation of concentrations of the extract. The extracts were dissolved in DMSO to make final concentrations of 200 mg/ml.8

Preparation of Inoculum: The inoculum of each isolate was prepared using McFarland Specific-ations. According to CLSI recommendations, the inoculum size was established using the BaSO4 and sulfuric acid turbidity standard equal to 0.5 McFarland, which contained 2x 108 CFU/ml. The loopful of microbial culture was suspended in Mueller Hinton broth and incubated at 37 oC for 24 h and after incubation; dilutions of inoculums were prepared to obtain the equivalent optical density 9. The fungal isolate was grown on Sabouraud dextrose agar (SDA) at 25 °C until sporulation of fungal spore occurred. The spores were harvested and scraped using a glass rod. The harvested spores were standardized to an OD of 0.1 and 1 microliter of standardized fungal spore suspension was evenly spread on SDA medium using spreader 10.

Antimicrobial Activity of S. alata: The anti-microbial assay was performed using the technique of agar well diffusion as per the CLSI guidelines. The sterile Mueller-Hinton agar plates were prepared, and the inoculum was spread evenly on the agar medium surface using sterile cotton swab aseptically. The 6 mm cork borer was made to sterilize with alcohol and was further used to prepare wells on the seeded Muller-Hinton agar plates for bacteria and for fungal isolates SDA (Sabouraud Dextrose Agar) medium was used. The double dilution technique was used for the preparation of concentrations of the extracts and in each well 25 µl of the extracts was added. The plates were then placed in the refrigerator for   30 min. for the diffusion of the extract into the agar plates. The plates were incubated at 37 °C for 24 h the plates containing fungal culture were incubated at 25 °C for 36 h. The inhibition zones (mm) were measured. The entire procedure was carried out in triplicate and in sterile conditions in Laminar Air Flow 11.

Determination of MIC and MBC of the S. alata Extract: The Minimum Inhibitory Concentration Assay is a technique used to determine the extract's lowest concentrations, which is needed to kill the bacteria. The MIC of the methanol and ethanol leaf extracts was determined for each test organism in triplicate. The concentrations of the extracts were prepared in the range of 1.625, 3.125, 6.25, 12.5, 25, 50, 100, and 200 mg/ml. The 1 ml of the extracts at double strength concentrations were added to test tubes containing 1ml of Mueller Hinton(MH) broth for the bacteria and potato dextrose broth for the fungi.

A loopful of the test organisms previously diluted to 0.5 McFarland turbidity standards for bacterial isolates and 106 spores/ml for fungal isolates was introduced to the respective tubes. The procedure was repeated using the standard antimicrobials Streptomycin and Griseofulvin instead of the extracts. A tube containing Muller Hinton broth only was seeded with the test organisms to serve as a negative control. Tubes containing bacterial cultures were then incubated at 37 °C for 24 h while tubes containing fungal spore cultures were incubated at 25 °C for 36 h. After incubation, 0.2% phenyl tetrazolium salt was added to the tubes to observe the colour of the tubes, and MIC value was noted. To determine minimum bactericidal (MBC) and minimum fungicidal concentrations (MFC), a loopful of broth which did not show any growth in MIC determination was taken, and streaks it on sterile Mueller Hinton agar plates for bacterial cultures and for Fungal cultures SDA plates were used. To serve as a control, Mueller Hinton agar and SDA culture medium were streaked with the respective test organisms. Plates were then incubated at 37 °C for 24 h for bacterial cultures and for fungi were incubated at 25 °C for 48 h. After incubation, the concentration at which no visible growth was seen was recorded as the MBC and MFC, respectively 12.

FTIR Analysis of S. alata Extracts: The metha-nolic and ethanolic extracts of leaves were centrifuged at 3000 rpm for 10 min and then centrifuged samples were filtered using Whatman No.1 filter paper. The filtrate was then diluted with the respective solvents with a ratio of 1:10. The FTIR analysis of the sample was done using the Shimadzu IR spectrophotometer system to identify the signature peaks and their functional groups 14.

Antioxidant Activity of S. alata Extracts DPPH Assay: The 1, 1 – diphenyl – 2 – picryl - hydrazyl (DPPH) scavenging assay was used for the determination of antioxidant activity of methanolic and ethanolic extracts of leaves of S. alata. The absolute ethanol was used in preparation of sample and 0.1 ml of sample was added in same volume of DPPH solution. After 30 min of incubation in the dark at room temperature, the absorbance was taken at 520nm using a spectrophotometer. Ascorbic acid was used as standard control. All tests were run in triplicate and averaged 15.

The percentage scavenging was calculated using the following formula,

Collection of Plant Material: The healthy and fresh leaves of S.alata were collected from different locations of Nashik District, Maharashtra. 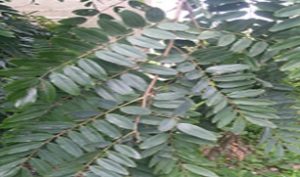 Preparation of Plant Extract: The methanolic and ethanolic extracts of leaves were prepared and used for further procedure. 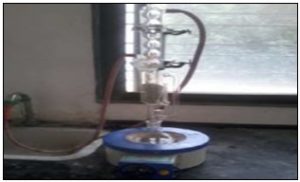 The methanolic and ethanolic extracts of leaves of S. alata possess secondary metabolites which showed antimicrobial activity against pathogenic microorganism. The highest zone of inhibition of methanolic extracts was shown against A. niger with a zone of inhibition 22 mm followed by  P. aeruginosa  (21 mm), E. coli (19 mm), S. aureus (18 mm), B. subtilis (18 mm), P. fluorescence (17 mm), B. cereus (15 mm).

The Streptomycin and Griseofulvin were taken as a positive control, and methanol and ethanol served as a negative control for the respective extract 17; the results are summarized in Table 1. 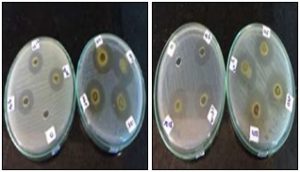 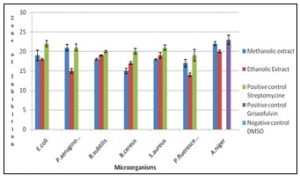 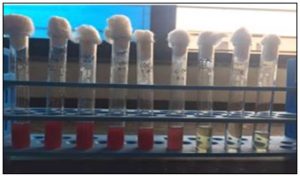 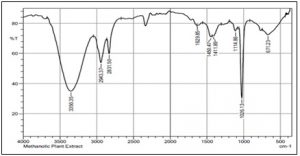 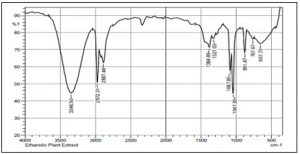 Anti-oxidant Activity of S. alata Extracts: The antioxidant activity of S. alata leaf extracts was calculated using the capacity of the secondary metabolites to reduce the radical scavenging function free  DPPH by pairing of an odd electron with hydrogen which turns the purple color of DPPH into yellow.

CONCLUSION: The antimicrobial activity methanolic and ethanolic leaf extracts of S. alata were determined. Both the extracts showed highest zone of inhibition against a .niger. The MIC and MBC values are also determined for A. niger. The phytochemical analysis showed the presence of various secondary metabolites, which are responsible for the antimicrobial properties of the extracts. The FTIR evaluation of the extracts was carried out to determine the presence of functional gp. The ethanolic extract showed the highest antioxidant activity as compared to methanolic extract. Now a day’s drug resistance acquired by microorganisms causes a major threat to the public so more focus needs to be paid in using medicinal plants with antimicrobial properties. The present study indicates that the plant can be used to treat GIT, UTI, and wound infections as well as to treat fungal infections. Further work to be done to identify the active component of S. alata used in the preparation of the drug.