ABSTRACT: β-lactams have been widely used as antibiotics for treatment of nosocomial and community acquired infections for the last five decades. Under selective pressure from the extensive use of cephalosporins in 1980s and 1990s, many bacteria have emerged as resistant against these antibiotics. The resistance to β-lactam antibiotics can be due to any of the following three mechanisms i.e. decreased accumulation of the drugs by bacterial cell, hydrolysis of the antibiotics by β-lactamases (βL) and alterations in penicillin binding proteins that reduce their affinity for the drug. WHO has repeatedly warned for a growing emergence of bacterial antibiotic resistance. The consequences of drug resistance include higher mortality and morbidity. Hence there is a need to search for new alternative antimicrobial agents with fewer side effects. In the current study, we have checked the antimicrobial and antioxidant activities of ten traditionally used medicinal plants against β-lactam resistant bacteria isolated from urinary tract infected (UTI) patients. We have also proposed phytochemicals extracted from medicinal plants as potential antibacterials and investigation of inhibition of βL activity. The enzymes were purified and studied for inhibition assay by using nitrocefin as a substrate.

INTRODUCTION: The use of plant or its part in treatment of bacterial diseases has been an ancient practice and is an important component of healthcare system in India.  Bacteria have the hereditary potential to acquire resistance to drugs. Antibiotic resistance is the major problem in the treatment of in- and out- patients 1. The World Health Organisation (WHO) estimated that 80% population of Asian and African countries presently use herbal medicine for primary healthcare

Considerable research has been carried out on Pharmacognosy, chemistry, pharmacology and clinical therapeutics of Ayurvedic medicinal plants. Various studies and research is underway to investigate the antimicrobial potency of medicinal plants. Many reports have showed the effectiveness of traditional herbs against microorganisms.

The β-lactams constitute one of the most important antibiotic families in worldwide use. But extensive use of antibiotics has evolved bacteria resistant to antibiotics. From the late 1990s, multidrug-resistant Enterobacteriaceae (mostly Escherichia coli) produced extended-spectrum βL (ESBLs) 2. The incidence of antibiotic resistance among ESBL-producing Escherichia coli has increased in recent years. ESBLs appear mainly due to mutations in βL encoded by the SHV, TEM, and CTX-M genes 3, 4.

Due to consequences of drug resistance bacteria, there is an urgent need to develop an antimicrobial agent with lesser side effects and increased potency to inhibit multidrug resistant bacteria. Hence, the antimicrobial activities of plant extracts were evaluated against clinically proved β-lactam-resistant bacteria (Escherichia coli, Pseudomonas aeruginosa and Enterococcus faecalis) and reference strains of bacteria (Escherichia coli ATCC 35218, Pseudomonas aeruginosa ATCC 27853 and Enterococcus faecalis ATCC 29212) by using disc-diffusion assay.

The bacteria were isolated from urine samples of urinary tract infected patients. These samples were collected in a sterile container from pathology laboratories in Nagpur, Maharashtra, India. The bacterial colonies were isolated by streaking each urine sample on LB agar plate (Himedia DT001) and then identified by Gram’s staining and biochemical tests (Himedia KBM001, KB002, KB003) 5. The antibiotic sensitivity was done by Kirby-Bauer method 6. The resultant MDR E. coli strains were selected for isolating β-lactam resistant strains and the ESBL detection was done with following antibiotics: Cefazolin, Cefaclor, Cefixime, Cefepime (Himedia FD278).

The fresh leaves of all plants were washed with water, shade dried and powdered. 30g of leaf powder was used for phytochemical extraction through soxhlet apparatus using successive 300ml

of Petroleum ether (60-80 0C), acetone, chloroform (610C), methanol (78.50C) and water (800C). The solvents were selected according to their polarity. The extracts obtained were kept for solvent evaporation and stored in sealed tubes at 4 0C. Alternatively, cold maceration of the coarsely powdered leaves of all plants were carried out by soaking 30g of the powder in 150ml of 50% aqueous methanol with continuous shaking on rotary shaker for ten days. The filtrate was then evaporated to 30ml. The extracts obtained by Soxhletion and cold maceration were dissolved in distilled water and used for qualitative, quantitative phytochemical estimation and antibacterial analysis.

The antioxidant activity of all extracts obtained by hot and cold extraction methods were investigated by FRAP assay 17-20. 25μg extract in 1 ml of distilled water with 2.5 ml of phosphate buffer (0.2 M, pH 6.6) and 2.5ml of potassium ferricyanide were taken and incubated at 50°C for 30 min. 2.5 ml of trichloroacetic acid were added and centrifuged at 3000 rpm for 10 min. 2.5 ml of upper layer was pipette out. To it, 2.5 ml of distilled water was added along with 0.5 ml FeCl3. The absorbance was read at 700nm. Ascorbic acid was used as a standard 21-24.

The antibacterial activity of each solvent extract was measured in vitro against 15 clinical MDR (multidrug resistant) isolates representing five of E. coli, Pseudomonas aeruginosa and Enterococcus faecalis each. The antibacterial potential was investigated by disc diffusion method, as recommended by CLSI. Single colony from the UTI agar plate was inoculated in 10ml of LB media and incubated at 370C for 14-16 hrs to match McFarland’s turbidity standard of 0.5 which was equal to 1.5 × 108 cells/ml. This culture was then used for antibiotic susceptibility testing by disc diffusion method for antibacterial assay by Bauer-Kirby method 22.

The plates were examined for zone of inhibition and recorded as sensitive, intermediate and resistant referring zone size interpretive chart (Himedia).

25ml molten Muller-Hilton agar was inoculated with 10µl of each clinical isolate matched with 0.5 McFarland’s turbidity standard and poured in sterile petri dishes. After complete solidification of agar, the discs of 1mg-10mg of plant extract obtained through cold maceration were placed on top of the plate. These petriplates were incubated at 37oC for 18 hours. The result was observed for inhibition of bacterial growth.

Single colony of E. coli culture was grown in nutrient broth containing ampicillin (20µg/ml) as an inducer for enzyme production. This was harvested by centrifugation (7,000 x g, 20 min at 4°C), and washed twice in phosphate buffer (0.01 M, pH 7.0) at 4°C.  The extracellular medium was used for purification of β-lactamase.

The pre-treated dialysis membranes (LA395, Himedia) were used for dialysis of the precipitates collected after ammonium sulphate precipitation. The precipitate was dissolved in 0.1M phosphate buffer (pH 8) and dialyzed. After dialysis, the samples were used for protein estimation and enzyme assay 25.

The dialyzed enzyme (2ml) was applied to Sephadex G-25 column that was pre- equilibrated with 0.1 M Phosphate buffer (pH 8). The protein elution was done with the same buffer. The fractions were collected and assayed for protein at 280 nm as well as for enzyme activity with nitrocefin. The active fractions were pooled, dialyzed against the 0.1 M phosphate buffer at pH 8 and concentrated to yield 9.87 mU/mg protein 25.

Nitrocefin is a chromogenic cephalosporin substrate of βLs. As a cephalosporin, nitrocefin contains a β-lactam ring which is susceptible to β-lactamase mediated hydrolysis. Hydrolysis of nitrocefin produces a shift of ultraviolet absorption inside the visible light spectrum from intact (yellow) nitrocefin (~380 nm) to degraded (red) nitrocefin (~490 nm) allowing visual detection of β-lactamase activity 26. The enzyme was incubated with 10µM of phytochemicals (Chlorogenic acid, naringenin, quercetin, salicylic acid and theophylline) and the βL activity was checked. Significant inhibition of the enzyme activity was noted. The activity was calculated as:

Isolation and identification of clinical isolates:

Upon quantitative analysis of phytochemicals (Table 3), highest concentration of alkaloids in Tp, saponin in Al, flavonods in Gr, phenol in Bo, tannins in Bo and antocyanidin in Gr was observed. 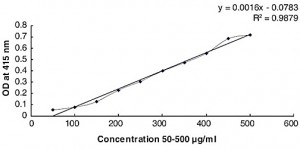 [Flavanoid concentration as quercetin equivalent per gram of plant material] 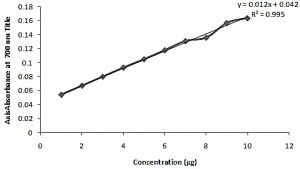 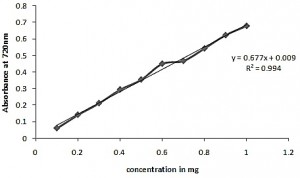 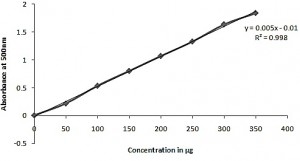 Concentration of anthocyanidin per catechin equivalent per gram of plant material

Identification of phytochemicals by HPLC: 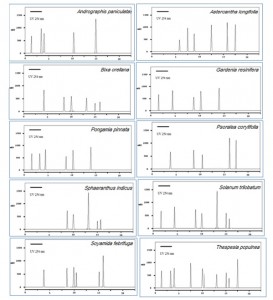 From the above observations, it is evident that catechol, gallic acid, pyrogallol and tannic acid act as very good antibacterial agents. Table 8: represents the specific activity of β-lactamase enzyme during various stages of purification.

Following image shows the result of βL analysed through SDS-PAGE. The expected protein band for βL is 30KDa. A single band of 30KDa was obtained upon desalting of protein.

Following Table 9 reports the βL activity in presence and absence of pure phytochemicals. The results showed that chlorogenic acid, naringenin, quercetin, salicylic acid, tannic acid and theophyllin could be the potential βL inhibitors.

DISCUSSION: The urinary tract infection (UTI) is serious bacterial infection that damages kidneys if untreated and is fatal. Most bacteria show resistance toward commonly used antibiotics. Hence, there is an urgent need to develop a good drug therapy regimen accordingly for recurrent and difficult to treat MDR UTI. The main mechanisms bacteria use to develop resistance against β-lactam antibiotics are the synthesis and secretion of βL that destroys the β-lactam ring of the antibiotic. The phytochemicals from Andrographis paniculata (Ap), Astercantha longifolia (Al), Bixa orellana (Bo), Gardenia resinifera (Gr), Pongamia pinnata (Pp), Psoralea corylifolia (Pc), Sphaeranthus indicus (Si), Solanum trilobatum (St), Soyamida febrifuga (Sf) and Thespesia populnea (Tp) have shown promising antibacterial activity and it is evident that they inhibit β-lactamase activity. The secretory βL enzyme were purified and investigated for its activity by nitrocefin as a substrate with and without aforementioned phytochemicals. This proves that chlorogenic acid, naringenin, quercetin, salicylic acid and theophylline have shown significant βL inhibitory activity.

Though chemically available chlorogenic acid, naringenin, quercetin, salicylic acid and theophylline do show antibacterial activity and significant βL inhibitory activity, they cannot be directly used for the treatment of MDR UTI. Hence, it is suggested that aforementioned plants which have shown the presence of chlorogenic acid, naringenin, quercetin, salicylic acid and theophylline can be successfully implemented in the treatment of difficult to treat recurring MDR UTI with less or no side effects. Also, these mentioned medicinal plants are low cost and are easily available.