ABSTRACT: Structural and thermal properties of silver/poly(vinyl alcohol) (Ag/PVA) nanocomposites  has been investigated as a function of Argon ion beam fluence. The XRD patterns (X-ray diffraction) showed the formation of the Ag/PVA in polymer structure and phase analysis with different sizes as a function of either ion beam fluence or Ag+ ion molar concentrations. The kinetic parameters for the thermal stability of Ag/PVA were evaluated applying Thermal Gravimetric Analysis (TGA), the decomposition temperature increase from 302 0C for pure PVA to 345 0C for irradiated  Ag nanofillers /PVA with ion beam fluence 3.0 x 1018 ions.cm-2 at 0.8 % AgNO3 concentration . Fourier transform infrared spectroscopy (FT-IR) exhibits the creation of polar groups on the surface which are responsible for surface wettability improvement. From the above, this procedure is simple and useful for large scale synthesis and which make this material as a candidate medical devices and for drug delivery applications.

INTRODUCTION: PVA is most widely used in medical devices due to its low protein adsorption characteristics, biocompatibility, high water solubility, and chemical resistance. Some of the most common medical uses of PVA are in soft contact lenses, eye drops, embolization particles, tissue adhesion barriers, and as artificial cartilage and meniscus. The objective of this review is to evaluate the available published information on PVA with respect to its safety as a medical device implant material for cartilage replacement. The review includes historical clinical use of PVA in orthopedics, and in vitro and in vivo biocompatibility studies. Finally, the safety recommendation involving the further development of PVA cryogels for cartilage replacement is addressed 1.

PVA was first synthesized by Haehnel and Hermann in 1924 via saponification of poly (vinyl ester) in sodium hydroxide solution. Since vinyl alcohol is unstable and rapidly tautomerizes into acetaldehyde, the PVA is commercially produced via hydrolysis of Poly (Vinyl Acetate) (PVAc) following a two-step process, i.e., free radical polymerization of vinyl acetate to PVAc followed by its hydrolysis. Structural properties of PVA hence primarily rely on the molecular mass of the polymer and the degree of hydrolysis, i.e., the percentage of vinyl alcohol in the polymer 2, 3 Due to their simple structure and unique properties such as adhesiveness, strength, film forming, biocompatibility, swelling, safety, and non-carcinogenicity, PVA polymers have found applications in different industries including textile, paper, adhesives, food, biomedical and pharmaceutical in particular 4.

Film forming, good mechanical and swelling properties, the PVOH hydrogels have been studied as drug delivery systems in oral, transdermal, buccal, intramuscular, rectal routes of administration. Degree of crystallinity plays a major role in controlling diffusion of the drug from Hydrogels 5.

In general, PVA hydrogels can be designed either as matrix or reservoir drug delivery platforms 6. The foreword of metal ions into a polymer, particularly when the metal is linked chemically with a polymer chain, often imparts new or improved properties to the polymer. Silver nitrate is a salt used to create Silver nanoparticles with PVA polymer. Silver nanofillers have been generally used in various biomedical fields like wound dressing materials, body wall repairs, augmentation devices, tissue scaffolds and antimicrobial filters 7.

Antimicrobial agents based on silver compounds have conventional much attention, because of their low toxicityto mouse embryonic fibroblast cells and human cells, aswell as being a long-lasting biocide with high thermal stability and low volatility. The antibacterial properties of silver are linked to the total surface area of the nanoparticles. Smaller particles with a larger surface to volume ratio provided more efficient sites for antibacterial activity. As a novel antimicrobial agent, the Ag nanoparticle composites has superior effect than other kinds of antibacterial agents, owing to its larger total surface area per unit volume and the unique chemical and physical properties. Ag nanoparticles have been reported to be effective in deactivating and inhibiting the growth of both Gram-negative and Gram-positive bacteria, but with more pronounced results exposed on the Gram-negative bacteria 8.

The present study is approved out to investigate the effect of Ar ion beam irradiation on the structure and thermal properties of PVA filled with different amounts of silver nitrate by using TGA, differential scanning calorimetry (DSC), X-ray diffraction and FTIR.

Preparation of Ag/PVA nanocomposites: PVA solution was first prepared by dissolving 6 gm in 100 ml distilled water, then warmed up to ~60oC and thoroughly stirred for 4h awaiting the polymer became completely soluble. AgNO3solutions with different concentrations (from 0.4% and 0.8% AgNo3), were added to the PVA solutions with incessant stirring for 2 h at 60oC to allow silver ions to chelate into PVA chain. The Ag/PVA solutions were then left to cool at room temperature before adjusting the pH of the solution at 3 using diluted nitric acid. Finally, the Ag/PVA matrix was cast on a Petri dish. Homogenous Ag/PVA films were obtained after drying at room temperature for 48 h so as to remove residual distilled water. The Ag/PVA films were irradiated with different Argon ion beam fluence (1.5 x 1018 ions.cm-2 and 3.0 x 1018 ions.cm-2) at the National Center for Radiation Research and Technology, NCRRT, Nasr City, Cairo, Egypt.

X-ray diffraction (XRD) measurements: The prepared films are characterized by using a fully computerized X-ray diffractometer, Shimadzu XRD-6000. The X-ray tube was operated at 40 kV, 30 mA anode current and Cu radiation λ=1.54056 Å throughout the measurements. The pattern is recorded at a scanning rate of 8o/min) at the National Center for Radiation Research and Technology, NCRRT, Nasr City, Cairo, Egypt.

The TGA studies are passed out using (Shimadzu DTG-60H), National Organization for Drug Control and Research (NODCAR), Cairo, Egypt. Our samples are measured in a range (30 to 600oC) in an atmosphere pressure of N2 at a heating rate of 10 °C/min.

X-ray diffraction (XRD) measurements: The XRD pattern of unirradiated pure PVA exhibits strong and broad diffraction peak positioned at 2θ = 20.0260 characterizing the PVA crystalline phase, is noticed for all the studied samples. Two other peaks are clearly observed at 2θ = 9.7° and 18.74° and the former is stronger and sharp. These two peaks neither belong to the pure PVA nor AgNO3 crystalline spectra, but they may occur from scattering atomic planes of some crystalline patterns of PVA–Ag+ complex. XRD pattern of the irradiated Ag/PVA nanocomposites show new diffraction peak at 2θ = 38.420, this discernible peak can be indexed to the planes (111) revealing that the Ag nanoparticles are formed in the PVA matrix as shown in Fig. 1 9. It can be seen that the Ag peaks get sharper and narrower with increasing AgNO3 concentration. This income that the increase of AgNO3 molar concentration assist the growth of the Ag nanoparticles within thePVA matrix. In adding up, the intensity of the observed peaks increases as a result of increasing AgNO3concentration 10. 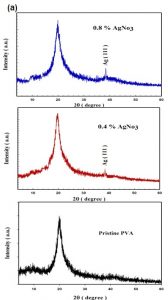 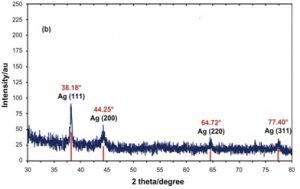 FT-IR surface analysis: Fig.(2A) shows the absorption peaks of pure PVA at about 3247.5 cm−1 (–OH stretching) and at about 1082 and 1414.5 cm−1 for the –C–O group. Fig. (2B and 2C) show absorption peaks of Ag/PVA nanofillers at wave number of range below 500 cm-1 indicates the presence of silver groups. This in turn confirms the attendance of PVA polymer and Nano Silver materials in the substrates produced 7, 9, 10. 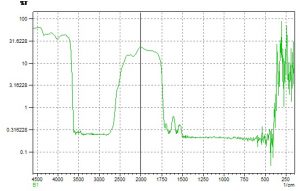 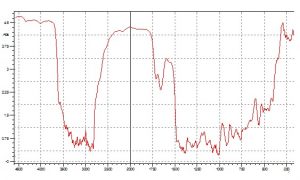 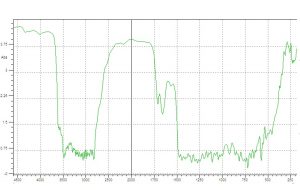 Thermal Gravimetric Analysis (TGA): TGA provides quantitative in sequence on the weight change process, TGA was performed for irradiated and non-irradiated Ag/PVA samples in the temperature range from room temperature up to 450°C, at a heating rate of 10°C/ min. 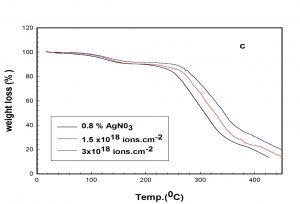 Fig. 3 (b) show TGA thermogram for the unirradiated and irradiated Ag/PVA nano composites sample with 0.4 % AgNO3, the samples were thermal stable at 275°C for irradiated sample with ion beam fluence 3 x 1018 ions.cm-2. The weight loss of the film is about 80% of the sample at 408°C. The thermal decomposition temperature increase from 302°C for Ag/PVA to 340°C for irradiated Ag/PVA nanocomposite with ion beam fluence 3 x 1018 ions.cm-2 as shown in Fig. (4). 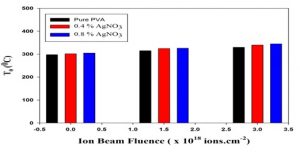 FIG. 4: DECOMPOSITION TEMPERATURE AS FUNCTION OF ION FLUENCE FOR Ag/PVA NANOCOMPOSITE AT DIFFERENT CONCENTRATION OF AgNO3.

From Table 1. It is obvious that the decomposition temperature increase with increase ion beam fluence and with increase AgNO3 concentrations.

CONCLUSION: Ag nanoparticles are widely applied in many fields be indebted to its excellent antibacterial performances. We have successfully synthesized Ag-NPs/PVA. XRD pattern show peak at 2θ = 38.420 which is the preferred orientation plane of silver nanoparticles.