INTRODUCTION: For thousands of years, human civilizations have applied substances to the skin as cosmetic and medicinal agents 1.  However, it was not until the twentieth century that the skin came to be used as a drug delivery route. In fact, Merriam Webster dates the word “transdermal” to 1944, highlighting that it is a relatively recent concept in medical and pharmaceutical practice 2.

Anatomy of the skin: The skin is the largest organ in the body and, on average, accounts for about 6 lbs of our body weight 5.  Skin is approximately 1.5mm in thickness and has as its primary function to keep the body hydrated, or, in other words, to keep water inside the body 6. The skin also prevents foreign substances from entering the body from the environment. Figure 1 represents a cross-sectional view of the skin. 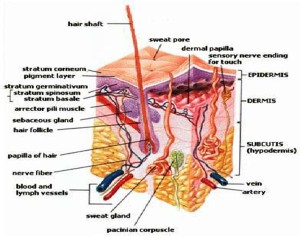 The dermis is where structures such as sweat glands, hair follicles, and the smaller blood vessels are located. Therefore, in order to have drug delivery via the skin, the drug must pass through the epidermis into the dermis where it can be absorbed by capillaries into the circulatory system. 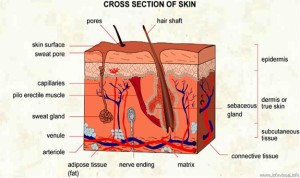 Advantages and disadvantages of transdermal drug delivery: First, there are biological advantages to delivering drugs through the skin 4 & 5.

1)      Only a narrow range of molecules can currently be delivered transdermally using available technologies. Only small, relatively lipophilic molecules can pass through the lipid bilayer “mortar” of the stratum corneum using traditional patch technology. As drug treatments become more and more complex, drug molecules are becoming larger and more complex as well and new technologies will be needed to deliver these drugs through the skin 1.

2)      Figure 3 is representative of the types of molecules that can currently be delivered through the skin. All of these molecules are organic in nature and are considered lipid soluble. Even though these molecules contain a few polar atoms such as oxygen and nitrogen, they are made primarily of carbon and hydrogen atoms that render them nonpolar. Nicotine is the smallest molecule represented with a molecular weight of only 162.24 g/mol. Although hormones or a molecule like fentanyl, with a molecular weight over 300 g/mol, are considered large organic molecules, they are still much smaller than even a small protein such as insulin.

3)      Currently, only small quantities of drug can be delivered through the stratum corneum. Therefore, drugs that are given transdermally must be relatively potent so that they can be effective at low doses. 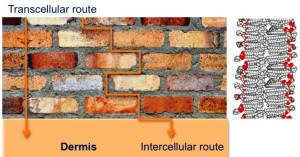 TABLE 1: ITACILIZED ENTRIES REPRESENT SOME TDDS OTHER THAN A SIMPLE PATCH;**DENOTES PRODUCTS THAT WERE APPROVED AND LATR REMOVED FROM THE MARKET 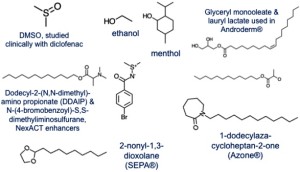 Heat as a Penetration Enhancer: Another form of penetration enhancement is the use of heat to increase the permeability of the skin. Unfortunately, the medical community was made aware that heat can increase the absorption of drugs through the skin in 2005 when the FDA began issuing warnings regarding the safe use of fentanyl patches after deaths had been attributed to wearing the patch while sleeping in heated water beds or using heating pads7.

Iontophoresis as a 2nd Generation Penetration Enhancer: Iontophoresis is the process of using small amounts of electrical current to move drugs across the skin and can also be used to enhance penetration of drug molecules through the stratum corneum 1.

If an anode attracts negatively charged particles, then it will repel positively 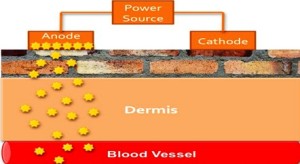 TABLE 2: DOSE-TO-SIZE RELATIONSHIP CAN READILY BE SEEN IN THE SIZE OF FENTANYL PATCHES

The Smart Patch® is also referred to as the “active” patch to contrast the active, iontophoretic delivery of drugs from this system with the passive diffusion found in a 1st generation patch. Vyteris is investigating the use of its Smart Patch® with zolmitriptan for migraine and NSAIDS for chronic pain. 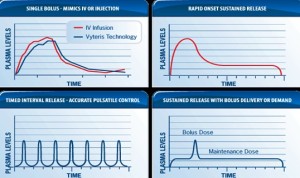 Altea Therapeutics also has a thermal ablation product known as the PassPort ® 28. This device will deliver up to 10mg of protein and over one hundred milligrams of hydrophilic drug, making this one of the first TDDS that will deliver significant quantities of a hydrophilic drug. 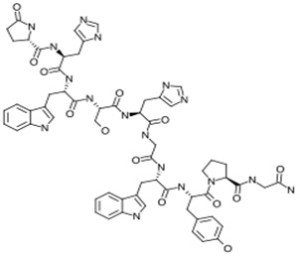 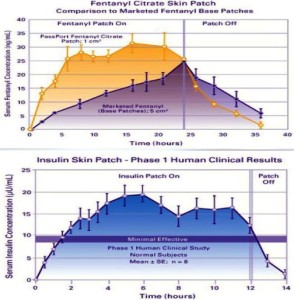 The data collected in this study show that the blood glucose level of the control group continued to rise throughout the 90-minute experiment while the blood glucose of the TDDS group fell during the same study period. The authors conclude that the use of this cymbal transducer array shows promise in safely lowering blood glucose to normal, human values. 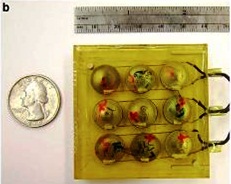 Microneedles can be 200-750 microns in length 37 and are fabricated in groups called arrays that can contain 150-650 microneedles/ cm2.

Microneedles can be hollow and deliver drug through the pores of the needles or they can be coated with active ingredients that deliver the drug as the microneedles dissolve in the skin 38.

Intanza® seasonal flu vaccine is currently in clinical trials in the US sponsored by Sanofi-Pasteur. These microneedles will even be investigated for patient self-administration in the near future 46.

In addition, microneedle delivery of PTH has been shown to be more effective than both placebo and conventional therapy at increasing total hip bone mineral density 49. Zosano is ready to begin phase III

RESULTS: An April 2011 search of the word “transdermal” at clinicaltrials.gov returned 456 entries (U.S.National Institutes of Health 2011). The focus of these trials is both novel products and noveldelivery routes of existing products. The scope of some of these transdermal clinical trialsincludes:

CONCLUSION: To name a few despite some disadvantages, transdermal drug delivery offers many advantages capable of improving patient health and quality of life. 1st and 2nd generation TDDS offer these advantages but are technologies exist that have the potential to transform TDDS in the near future and offer even more clinical advantages to the patient.imited in the scope of molecules that can be delivered through the skin.