THROMBOLYTIC POTENTIAL OF PUNICA GRANATUM – A STUDY IN THE RAT MODEL

THROMBOLYTIC POTENTIAL OF PUNICA GRANATUM – A STUDY IN THE RAT MODEL

Shalini H. Kumar and A. Pushpa *

ABSTRACT: Although the antioxidant and thrombolytic potential of the “super fruit” pomegranate has been well established and documented in in vitro models, its efficacy in an animal model has not been recognised. Therefore in the present study, the aril and rind of Punica granatum were scrutinized for their role in clot lysing competence in a thrombus induced rat model. Visual manifestation, coagulation time parameters and the level of the thrombotic factors confirmed the thrombolysis. The extracts were compared with the standard drug streptokinase that was administered in rats.

INTRODUCTION: Cardiovascular diseases (CVD) remain the grim reaper’s primary calling card. CVDs and other related disorders are the major cause of death in the populace all over the world 1. Mortality and morbidity from CVDs, both coronary heart disease (CHD) and stroke, have declined in most high income countries and presently the largest burden has shifted to middle and low income countries 2. Vitamin K antagonists were the mere choice for long-term anticoagulation until recent times.  Novel oral anticoagulants have reduced medication and food interactions compared to warfarin and they eliminate the need for frequent monitoring 3. All available thrombolytic drugs still have considerable limitations. Hence, a quest for an alternative reliable source remains the need of the hour.

Previous studies in our laboratory have proved the in vitro clot lysing ability of the fruit pomegranate. So, in an attempt to study the in vivo clot lysing potency of the fruit, carrageenan induced rat tail model was chosen. Advantages of the carrageenan induced thrombosis model in rats and mice are: (i) simple induction in small laboratory animals, (ii) easy observation and quantification all the time without killing the animals 4. Another advantage is that it allows easy evaluation of drug efficacy by comparing the length of the infarct region in tail of rats.

Collection and preparation of extracts:

The fruit sample was collected from the Coimbatore city and certified by the Botanical Survey of India, Coimbatore. The voucher specimen was collected and maintained. The aril and rind of fresh fruits were collected, washed and homogenized using distilled water for the preparation of aqueous extract. It was then filtered using Whatmann No 1 filter paper and used for further study.

Evaluation of in vivo clot lysis in rat models:

In vivo studies were carried out by the oral administration of aril and rind of Punica granatum to examine the clot lysing ability and antioxidative effect to the experimental rats.

Male Swiss Albino rats were procured from Bangalore and were housed in microloan boxes in a controlled hygienic environment at temperature 25 ± 2°C and 12 hr dark/light cycle. The study was conducted after obtaining institutional animal ethical committee’s clearance (IAEC No: KMCRET / Ph.D / 12/ 2014 – 15). As per the standard practice, the rats were segregated and quarantined for 15 days before the commencement of the experiment. They were fed on standard healthy diet and water ad libitium. The acute toxicity studies carried out confirmed that the extracts are not toxic even at the concentration of 5000 mg/kg.

The rats were divided into five groups with six rats in each. The groupings are as follows:

Experimental rats were anaesthetized with i.p injection of ketamine hydrochloride (100 mg/kg). To attain effective clot formation κ – carrageenan (1 mg/kg) dissolved in saline was injected into the rat tail vein at a site 12 cm from the tip of the tail with a ligation. After a period of 10 minutes, the ligature was removed. The length of the infarct was monitored for thrombus formation. Once thrombus was formed, the animals were treated with respective extracts and monitored for the reduction in the length of the thrombus in rat tail for 30 days.

At the end of the study, the rats were sacrificed after an overnight fasting. The blood of the animals was collected by heart puncture and the serum separated was used for the estimation of haematological parameters associated with thrombolysis.

Evaluation of the thrombotic parameters:

Venous blood was collected into chilled tubes containing trisodium citrate as an anticoagulant and placed on ice. The sample was then centrifuged at 4°C and the plasma sample was collected, diluted with acetic acid and incubated on ice for 15 minutes. A precipitate was formed (the euglobulin fraction of plasma) which contains plasminogen, plasminogen activators (primarily t-PA) and fibrinogen. The supernatant was collected by centrifugation in refrigerated centrifuge at 4°C.

The supernatant was discarded and the precipitate was dissolved in buffer. This was then clotted with thrombin and the time to clot lysis was determined by inspection every 15 minutes. A control plasma sample collected at the same time must be run in parallel.

Blood samples were collected from anaesthetized rat into a 1ml-microfuge tubes containing an anticoagulant sodium citrate solution (3.8%) in (9:1) ratio. The citrated blood samples were centrifuged at 1500g for 15 min at room temperature. Supernatant plasma was carefully transferred to tube for estimation by turbidity method. Fibrin formation results in an increase in turbidity, which is detected by photometer at 470 nm. 25µl plasma and 25µl charged phospholipids (kaolin) was added and incubated exactly for 5 minutes. 25µl prewarmed calcium chloride was added and the result was displayed in seconds. 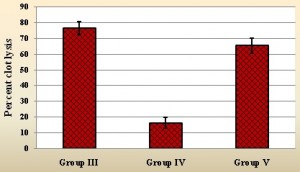 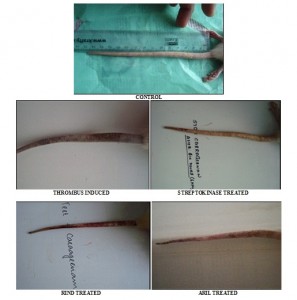 Rats with tail length more than 15 cm were chosen for the study. Thrombus formation was induced with a frequency of 100% by ligating the tail for a period of 10 minutes and thereby altering the normal blood flow. Hagimori et al. 11 have reported that 1mg/kg kappa-carrageenan injection in combination with 10 minutes ligation at the tail increased the frequency of thrombosis to almost 100% in rats. Carrageenan induced thrombosis model was used because of its advantages of simple induction and easy to observe nature. It is widely used as a model in peripheral obstructive diseases12. A distinct clot formation was observed in rats when injected with κ – carrageenan which was then lysed with streptokinase and fruit extracts. The mean length of the infarct was found to be significantly shorter in rats administered with the standard (streptokinase) and fruit extracts, after lysis when compared with the infarct length formed before lysis. Effect of the aqueous extract of aril of Punica granatum was highly comparable with the streptokinase. The rind of pomegranate showed least clot lysis when compared to all the other extracts.

Clot formation and subsequent lysis was found to profusely affect bleeding time, clotting time, activated partial thromboplastin time and euglobulin clot lysis time. Hence the rats in different groups were analysed for the above mentioned time parameters and the results are as recorded in Table 2 and Fig. 3 and 4.

The bleeding time, clotting time and APTT were found to decrease on the onset of thrombus formation and increased during thrombolysis. Activated partial thromboplastin time is a global marker indicative of changes in the intrinsic and common pathway of thrombus formation. Achneck et al. 13 affirmed that lower APTT is associated with high levels of certain coagulation factors and corresponds to a procoagulant tendency. A marked increase in the bleeding and clotting time was observed in κ- carrageenan induced rats when administered with Douchi fibrinolytic enzyme from Bacillus subtilis 12. Similar pattern was found in the present study when the thrombus induced rats were treated with streptokinase and pomegranate extracts. Euglobulin clot lysis time (ECLT) measures the overall fibrinolytic pathway. Shortened euglobulin clot lysis time marks an increased fibrinolytic pathway and hence an increased ECLT in streptokinase and extract treated groups is substantiated. 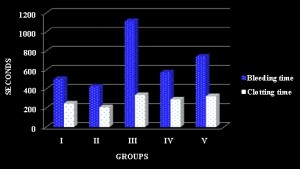 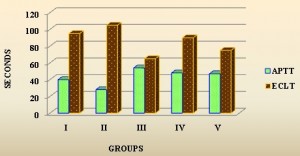 The levels of D-dimer, fibrinogen, creatine phosphokinase and hs-CRP were slightly increased when thrombus was formed which peaked during the treatment with standard drugs and fruit extracts. Rats treated with streptokinase exhibited maximum d-dimer, fibrinogen and hs-CRP generation. Many studies have been reported on the generation of D-dimer during infarction treatment. Bäumer et al. 14 demonstrated that D-dimer generation increased when treated with tPA, a thrombolytic agent.

Lelakowski et al. 15 showed that thrombotic factors such as D-dimer, fibrinogen and hs-CRP levels increased on the incidence of venous thromboembolism and after pacemaker implantation. The D-dimer level in patients with deep vein thrombosis was higher when compared with patients without DVT 16. Knipper et al. 17 found that the increased CPK level provided an indication of effective thrombolysis.

tPA is the primary initiator of thrombolysis wherein it plays an important role in removing the thrombus formed. Our study reveals that the level of tPA is greatly increased on the commencement of thrombolysis by fruit extracts and standards. The visual evidence in addition to the increased tPA levels proves the efficiency of Punica granatum in lysing the clot. The fruit extracts might have triggered the production of tPA apart from directly lysing the clot and hence the increase in plasma tPA levels. This also renders a possibility of decreased levels of PAI-1 as tPA is known to inhibit the inhibitor of thrombolysis.

CONCLUSION: With a plethora of shortcomings and negativity of the available thrombolytic therapies, these modest findings of the present study gain significance in employing the fruit Punica granatum for efficient clot lysis with further insight into the mechanism of action.

Shalini H. Kumar and A. Pushpa *