ABSTRACT: Plants have been one of the important sources of medicines since the beginning of human civilization. There is a growing demand for plant based medicines, health products, pharmaceuticals, food supplements, cosmetics etc. A review of chemical constituents present in various parts of Tinospora cordifolia and their pharmacological actions is given in the present article. Tinospora cordifolia, is a commonly used shrub in Ayurvedic medicine. Although the review articles on this plant are already published, this review article is presented to comply all the updated information on its phytochemical and pharmacological activities, which were performed by widely different methods. The notable medicinal properties are anti-diabetic, anti-spasmodic, anti-malarial, anti-inflammatory, anti-arthritic, anti-oxidant, anti-allergic, anti-stress, anti-leprotic, hepatoprotective, immunmodulatory & anti-neoplastic activities.

INTRODUCTION: Herbal medicines represents one of the most important fields of traditional medicine all over the world. To promote the use of herbal medicine & to determine their potential as a source for new drugs, it is essential to study medicinal plants which have folklore reputation in a more  intensified way 1. Human beings have used plants for medicinal purposes for centuries. Traditional forms of medicine have existed and still exist in many countries of the world including countries in the Indian sub-continent like India, Pakistan and Bangladesh 2. The writings indicate that therapeutic use of plants is as old as 4000–5000 B.C. and Chinese were the first to use the natural herbal preparations as medicines 3.

Plants are one of the most important sources of medicines. Today the large number of drugs derived from plants, like morphine from Papaver somniferum, Aswagandha from Withania somnifera, Ephedrine from Ephedra vulgaris, Atropine from Atropa belladonna, Reserpine from Rauwolfia serpentina etc. The medicinal plants are rich in secondary metabolites (which are potential sources of drugs) and essential oils of therapeutic importance. The important advantages claimed for therapeutic uses of medicinal plants in various ailments are their safety besides being economical, effective and their easy availability 4, 5. Because of these advantages the medicinal plants have been widely used by the traditional medical practitioners in their day to day practice.

The future of higher plants as sources of medicinal agents for use in investigation, prevention, and treatment of diseases is also very promising. Natural products have provided us some of the important life-saving drugs used in the armamentarium of modern medicine. However, among the estimated 250,000‐400,000 plant species, only 6% have been studied for biological activity, and 15% have been investigated phytochemically. This shows a need for planned activity guided phyto‐pharmacological evaluation of herbal drugs 6. This article intends to provide an overview of the chemical constituents present in various parts of Tinospora cordifolia and their pharmacological actions.

Tinospora cordifolia is a glabrous, succulent, woody climbing shrub native to India. It thrives well in the tropical region, often attains a great height and climbs up the trunk of large trees. The stem is gray and creamy white, deeply cleft spirally and longitudinally, with the space between spotted with large rosette like lenticels. The wood is white, soft and porous and the freshly cut surface assumes a yellow tint when exposed to air. Leaves are simple, alternate, exstipulate, long petiolate, chordate in shape showing multicoated reticulate venation. Long thread like aerial roots come up from the branches. Flowers are small and unisexual. Male flowers are in clusters, female flowers are solitary. Six sepals arranged in two whorls, they are obovate and membranous. Aggregate fruit is red, fleshy with many drupelets on thick stalk with subterminal style scars, scarlet coloured 9, 10. 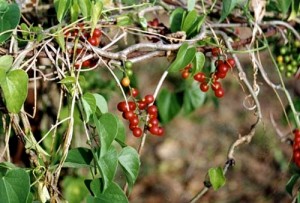 The Ayurvedic drug Guduchi or Amrita is mentioned in various texts of Ayurvedic system of medicine viz: Charak, Sushrut & Ashtang Hridaya and other treaties like Bhava Prakash & Dhanvantri Nighantu under other various names viz: Amara, Amritvalli, Chinmarrhuha, Chinnodebha & Vatsadani etc, 11-15. In Sushurta Samhita, it is mentioned under Tikta- Saka Varga & claimed tobe useful in treating kustha (leprosy), Maha Jvara (fever), Svasa (asthma) and Aruci (anorexia) 14. In other treaties like Charak Samhita & Ashtang Hridaya, it has been indicated in diseases like Kamala (jaundice), Javara (fever) & Vat Rakta (gout) 13, 15. In Bhavya Prakash, it is considered as bitter tonic, astringent, diuretic and potential aphrodisiac & curative against skin infections, jaundice, diabetes, chronic diarrhea & dysentery16. In Dhanvantri Nighantu, its medicinal properties are mentioned for cure of bleeding piles, promoting longevity, curing itching and erysipelas 17. It is reported to be a potent vegetable tonic. It is a traditional belief among Ayurvedic practitioners that Guduchi Satva obtained from Guduchi plant growing on Neem tree (Azadirachta indica) is more bitter & more efficacious and is said to incorporate the medicinal virtue of neem also 18.

The drug caught the attention of European practitioners in India as a specific tonic, antiperiodic and for its diuretic properties & it was included in Bengal Pharmacopoeia of 1868 19. Tinospora cordifolia is mentioned in Ayurvedic literature as a constituent of several formulations used in debility, dyspepsia, fever & urinary diseases. Some of the important formulations are:

Uses In Folk And Tribal Medicine:

A rearranged cadinane sesquiterpene named tinocordiside, consisting of tricyclic skeleton with a cyclobutane ring, has been isolated from the aqueous fraction of T. Cordifolia 29.

The new clerodane furano diterpene 2 with the molecular formula C20H20O8, has been isolated from the stems of the plant 30. 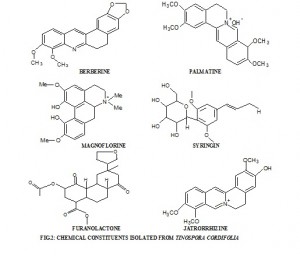 The plant is used to improve the immune system and the body resistance against infections. The root of this plant is known for its anti-stress and anti-malarial activities. The stem is bitter, stomachic, diuretic, stimulates bile secretions, allays thirst, enriches the blood and cures jaundice. The extract of the stem is useful in skin problems. The root and stem of Tinospora cordifolia is prescribed in combination with other drugs as an antidote to snakebite and scorpion. 33 The plant is also used in the treatment of wounds, pneumonia, asthma and cough. Tinospora cordifolia has anti-cancer, immune stimulating, nerve cell protecting, anti-diabetic, cholesterol-lowering and liver-protective actions. Tinospora cordifolia is also responsible for decreasing the tissue damage caused by radiation, the side effects of some forms of chemotherapy and speeding healing of diabetic foot ulcers 34.

CONCLUSION: There has been an increase in demand for the phytopharmaceuticals all over the world because of the fact that the allopathic drugs have more side effects. This forms a good basis for the selection of plant for further phytochemical and pharmacological investigation.

The pharmacological and clinical studies reported in the present review confirm the therapeutic value of Tinospora cordifolia. Presence of chemical compounds indicates that the plant could serve as “lead” for development of novel agents for disorders in the coming years. In this regard, further studies need to be carried out to explore Tinospora cordifolia for its potential in preventing and treating diseases. So, the present review gives a direction for future investigators to carry out research on the plant so that they could get some medicinally important drugs.