Flurbiprofen is a water insoluble non-steroidal anti inflammatory drug and belongs to BCS Class II categories. Solid dispersion is a technique by which we can improve it water solubility. By the help of fast dissolving formulation we can evaluate the effectiveness of solid dispersion. In this research work the solid dispersion of flurbiprofen with polymer like PVP K25, PVP K30, PVP K29-32, and PEG 6000 in different ratio (1:1 -1:5) were formulated the optimized batch was selected on the basis of dissolution test and other evaluation parameter like IR, DSC, TLC, etc. Fast dissolving tablets were formulated of optimized solid dispersion batch by direct compression method using superdisintegrants like crosspovidone, crosscarmellose sodium (2.5% to 77%). The prepared tablets were found to comply with various official specifications. The dissolution release rate from all optimized batches were studied and found to be 99.9% in 4 minutes in case of formulation containing 60% of crosspovidone.

INTRODUCTION: The purpose of present investigation was to evaluate effectiveness of solid dispersion in formulation of fast disintegrating tablets. Techniques that have commonly been used to improve dissolution and bioavailability of poorly water-soluble drugs, in general, include micronization, the use of surfactant, and the formation of solid dispersions 1, 2. The solid dispersion technique for water insoluble drugs was developed by Chiou and Reigelman3 and provides an efficient method to improve the dissolution rate of a drug.

In solid dispersion system, a drug may exist as an amorphous form in polymeric carriers, and this may result in improved solubility and dissolution rate as compared with crystalline material l4,5. Generally hydrophilic carriers like PVP K25, PVP K29-32, PVP K25, PEG 6000 used for preparation of solid dispersions. The concept of fast dissolving Drug Delivery System emerged from the desire to provide patient with more conventional means of taking their medication. It is difficult for many patients to swallow tablets and hard gelatin capsules.

Hence they do not comply with prescription, which results in high incidence of non-compliance and ineffective therapy 6, 7, 8.  Flurbiprofen, a water insoluble, nonsteroidal anti-inflammatory drug (NSAID) of the propionic acid class 9, 10, is used for the relief of pain and inflammation associated with rheumatoid arthritis and osteoarthritis and for the inhibition of intraoperative meiosis 11, 12. The basic approach used in the development of fast-dissolving tablets is the use of superdisintegrants. In this study we evaluated the effectiveness of the solid dispersion in the formulation of fast disintegrating tablets by the help of dissolution test.Also we performed dissolution of sold dispersion of different drug: polymer ratio. The batch of solid dispersion which gives best result was selected for formulation of fast disintegrating tablet. Optimization of the batch with the help of disintegration and dissolution test and also performed other evaluation parameters of fast dissolving tablet.

Preparation of Fast Disintegrating Tablets: The 1:1 ratio of flurbiprofen: PVP K29-32 solid dispersion was taken for formulation of fast disintegrating tablets (table 1).  Tablets were prepared from blend by direct compression method. All ingredients were sieved individually through sieve no. 60 and mixed in pestle-mortar and finally magnesium stearate was added and again mixed for 5 minutes. The mixed blend was direct compressed using single punch machine having flat faced punch, to obtained 350 mg weight of each tablet. The tablets were evaluated on the basis of General Appearance, Size and Shape, Uniformity of weight, Tablet hardness, Friability, Disintegration time, Wetting time, Content Uniformity and in vitro dissolution test.

Infrared Absorption Spectroscopy: Infrared absorption spectroscopy (IR) measurements were performed by using 295 spectrophotometer (Shimadzu, Japan), the samples were scanned over the range of 400 to 4000 cm-1. 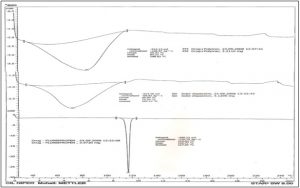 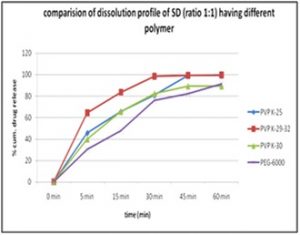 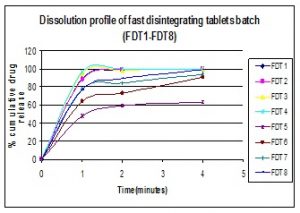 Evaluation of fast disintegrating tablets: Average tablet thickness of optimized batch was found to be   3.4mm. The uniformity of weight test passed by optimized formulation. There was not more than 5% weight variation found. Table 2 shows other evaluation parameter.

DISCUSSION: There was no interaction between the drug and polymers. The DSC scans for the drug-PVPK29-32 system prepared by solvent method were examined, and found that the sharp melting point of pure flurbiprofen appeared at 114°C where as no such peak was observed in solid dispersion prepared with PVP K9-32, suggesting that flurbiprofen was molecularly dispersed and in an amorphous form.

The hardness of tablet of optimized batch having crosspovidone varied from 2.76 to 3.2 kg/cm2 and with crosscarmellose sodium it varied from 2.83 to 3.36 kg/cm2. The results indicated that the content of flurbiprofen in each tablet of all batches of the fast disintegrating tablets was found within the limit of 100±5% (Table 2). On increasing the concentration of superdisintegrants polyplasdone from 2.5 % to 60% the disintegration time was reduced but above 60% concentration there were no effect on disintegration time.

So the optimized concentration of polyplasdone was 60% (FDT4). At this concentration the disintegration time was found to be 32 sec for batch, FDT4 (table 2). On increasing the concentration of Crosscarmellose sodium the DT reduced but in comparison to polyplasdone it did not give a better result. When the concentration of polyplasdone was 60% the DT obtained was 32 sec while at same concentration of crosscarmellose sodium the DT was in 102 sec. So we find that the crosspovidone gave better results in contrast with crosscarmellose sodium. Dissolution of fast dissolving tablet was carried out at pH 6.8 phosphate buffer. The dissolution of pure drug (100 mg) carried out at same pH by using muslin cloth and only 36.20% drug went into media (phosphate buffer) after 1 hour.  The results of table 3 showed that the formulation FDT4 gave 96.46% drug release in 1 minute while other formulation like FDT1, FDT2, and FDT3 gave 88.98%, 88.17%, 95.05% release respectively. According to table 3, other formulation like FDT5, FDT6, FDT7, FDT8 having crosscarmellose sodium as a superdisintegrants  gave 48.13%, 64.31%, 77.66%, 77.05% drug release in 1 minute and 59.12%, 73.16%, 83.95%, 89.01% release in 2 minutes.

So it conclude that the formulation FDT1 to FDT4 having crosspovidone as a superdisintegrants showed better dissolution in comparison to FDT5 to FDT8. Among all formulation FDT4 was the best, it gave faster drug release in comparison to the other. So FDT4 was the optimized formulation. The drug content in fast disintegrating tablet FDT4 after 30 days of stability testing was found to be 98.70% and after 60 days it was 98.50%. So there was no significant change observed in drug content.