ABSTRACT: Objective: To ensure the basic principles of drug utilization and the use and safety of blood thinning agents in tertiary care hospital. Experimental design: The study included 224 patients’ and was conducted in a tertiary care hospital and we were focused on to find out the drug-drug interactions of anticoagulants, antiplatelet, and thrombolytic agents, to study the major area involvement for blood thinning agents. The newly admitted case charts to the medicine ward will randomly be selected on a daily basis and will be reviewed for the medication safety compliance. Interpretation and Conclusion: Appropriate use of anticoagulant therapy and any deviation from the guidelines to a large extent also depends on patient characteristics and concomitant therapy patient is receiving. Some major complications are seen with oral anticoagulants which emphasize the need for a constant monitor and patient education. The need for dosage adjustments in different diagnostic situations or specific populations is very crucial. To increase patient education, an alert was built to notify pharmacists to educate patients on these new oral anticoagulants before discharge. Further studies from time to time are required in drug utilization pattern and standard treatment guidelines to be circulated among practicing physicians. The therapy with these drugs needs to be cost-effective and reduce the complications associated with their use.

INTRODUCTION: The recent developments were introduced several new oral anticoagulants, and more drugs are currently under development. Among 2,518,064 patients, 808,897 (average age, 72 years) received at least one prescription for an antithrombotic agent over the study period (2002-2014).

Use of blood-thinning medications among older adults was significantly associated with higher rates of hematuria (the presence of blood in urine)-related complications, including emergency department visits, hospitalizations, and urologic procedures to manage visible hematuria, according to literature published.

They also are effective in preventing venous thromboembolism in patients undergoing orthopedic or gynecological surgery and in preventing systemic embolization in patients with acute myocardial infarction, prosthetic heart valves, or chronic atrial fibrillation 1. For treatment of acute venous thromboembolism, heparin usually is continued for at least 4-5 days after oral anticoagulation is begun and until the INR is in the therapeutic range on 2 consecutive days. This overlap allows for adequate depletion of the vitamin K– dependent coagulation factors with long half-lives, especially factor II. Daily INR measurements are indicated at the onset of therapy to guard against excessive anticoagulation in the unusually sensitive patient. The testing interval can be lengthened gradually to weekly and then to monthly for patients on long-term therapy in that test results have been stable 2. To improve the patient outcomes given drug prescription and intervention drug utilization evaluation want to study in the hospital. The World Health Organization (WHO) defines drug utilization research as “the marketing, distribution, prescription and use of drugs in a society, with special emphasis on the resulting medical, social, and economic consequences.” In patients diagnosed with IHD, use of various cardiac acting drugs is more important to treat as first-line therapy. The following drugs like inotropes, vasopressors, antihypertensive, antiplatelet agents, lipid-lowering agents, and anticoagulants are frequently used in the hospital for the management of IHD 3. The main approached behind this work was to ensure the basic principles of prevention and control to a wide range of healthcare settings office-based practice, long term care facilities. The overall descriptions presented in this study provide a baseline data which would be useful for any drug utilization study and may explore the strategies and or intervention that has been considering or use with the intention of encouraging patients.

Experimental Design: To study the evaluation of use and safety of blood thinning agents at Bangalore Baptist Hospital, India. This was a Prospective Observational Study and conducted in the Department of Surgery ward, Medicine ward, ICU, CCU a 500 bedded multi-specialty tertiary care teaching hospital. The first step in the study was to design a Data collection form and the patient data collection form was used to collect all the details like Inpatients number, Patient name, Age, Sex, Date of admission, Date of discharge, Chief complaints (c/o), History of Present Illness (HOPI), Past Medication history, Laboratory data, Culture sensitivity test, Diagnosis and Therapeutic management.

Study Procedure: The patient demographics and all medically relevant information will be noted in a predefined data collection form. Alternatively, these case charts will be reviewed for prescription legibility and completeness, unaccepted abbreviations, the capture of relevant information in case sheet, contraindication, drug interactions, and adverse drug events and dose calculations based on their weight and BSA. The changes and the daily notes in the case sheets will be followed until the patient is discharged or shift to other wards. The prescription guidelines, Lexicomp, Medscape and references books will be used as tools to review the prescription and case charts. During the study patient’s medication chart was also monitored for any drug-drug interaction involving the anticoagulants used and any adverse drug reactions experienced by the patients on anticoagulant treatment. The data will be stored confidentially and will be subjected to further analysis using the appropriate software. In our study, we have generated a questionnaire to assess nursing department HODs regarding blood thinning agents, later on, we had validated.

TABLE 2: AGE GROUP CATEGORIZATION WITH INTERACTIONS IN THE STUDY PATIENTS 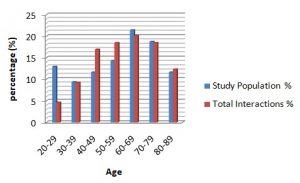 FIG. 3: AGE GROUP CATEGORIZATION WITH INTERACTIONS IN THE STUDY PATIENTS

TABLE 3: DISEASE/CO-MORBIDITIES IN THE STUDY PATIENT 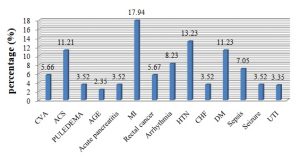 FIG. 4: DISEASE/CO-MORBIDITIES IN THE STUDY PATIENT 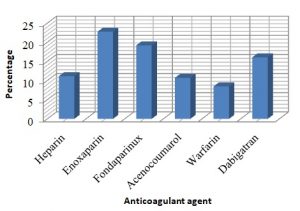 Category of Anti-platelets used in Study Population: In the study, Among 224 study population of Clopidogrel was found to be prescribed to the largest number (18.75%) Antiplatelet agent used in patients, followed by Tirofiban (11.16%) and Aspirin (7.14%)  Table 5 and Fig. 6 showed the details of patients’ category of Antiplatelets.

Category of Thrombolytic Agents used in Study Population: In the study, among 224 studies population of 42 patients were found to be having 18.75% of Streptokinase agent used.

The severity of the Drug Interaction among Study Population: Among the all 224 studies population, the interaction observed in the study patient were found to be major 51 (22.76%), moderate 9 (4.01%) and minor 5 (2.23%) category severity.

TABLE 7: SHOWED DETAILS OF DRUG-DRUG INTERACTIONS IN THE ANTICOAGULANT AGENTS

TABLE 8: SHOWED DETAILS OF DRUG-DRUG INTERACTIONS IN THE ANTIPLATELET AGENTS

TABLE 9: SEVERITY OF THE INTERACTION IN STUDY POPULATION 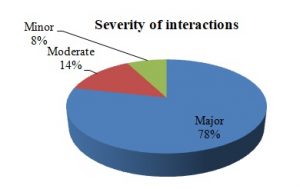 FIG. 8: SEVERITY OF THE INTERACTION IN STUDY POPULATION 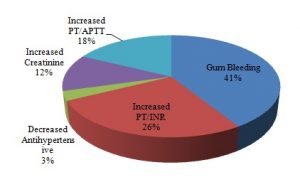 Validation of Questionnaire from Nursing HOD’s: In our study, we administered a questionnaire regarding blood thinning agents to the entire nursing department HOD’s and assessed the validation of the questionnaire and categorized the questions into very relevant, relevant, some relevant and not relevant. And observed educational and regulatory interventions were needed. Effective work practices improved the knowledge and professional behavior that minimize the risk and improve the quality of life.

DISCUSSION: Anticoagulants are the centerpiece therapy for the acute as well as long term prevention and treatment of thromboembolic disorders. As per the literature, current US prevalence estimate of AF is approx 2.6 million persons, and it is predicted to reach 12 million persons by the year 2050. Crowther MA et al., 1999; 198 patients were administered anticoagulants and patients were categorized into age groups which showed, 48 (21.42%) were belonging to age group of 60 to 69 years which covered majority of patients in the study, followed by 42 (18.75%) patients in age group of 70 to 79 years. Age group of 61 to 70 years was the most common in both genders.4 And compared with this data observed that Koaron C 2003; in 48 patient’s cases where PT, INR & tests were performed in 12 patients PT, INR & aPTT levels were increasing despite anticoagulant therapy, however in such patients the dose of anticoagulant drug administered was not further altered. Also in the therapy, enoxaparin showed lesser efficacy than with acenocoumarol as the PT, INR and aPTT values with enoxaparin therapy showed an increase compared to normal values 5. Taken together, Hylek EM et al., 1996; the results presented here indicate that more attention needs to be paid to ensure safe use of anticoagulants and diuretics, often used in elderly patients who experience far more ADRs compared with children or younger adults. Targeting education and prevention actions on these two drug classes could help to reduce the incidence rate of ADR related hospitalizations 6.

Ultrasound data were not available for this study Hering D et al., 2005; which limited our evaluation of the hemodynamic status of dissections. Stroke severity (i.e., NIHSS score) at presentation was not prospectively recorded, but we found no association between antithrombotic choice and the ischemic symptoms at presentation or the presence of infarction on brain imaging. Traumatic CAD patients were also included in our study; their hospital courses may have only allowed for AP treatment due to the risk of bleeding in the acute period 7. Hurlen M et al., 2002; Study was underpowered to detect the differences in the risk of recurrent ischemic events. Previous estimates suggest that thousands of patients are needed to compare the efficacy of anticoagulation to antiplatelet therapy in preventing recurrent stroke in patients with CAD. Clinicians should identify patients at risk for late bleeding after PCI and implement strategies to reduce the overall risk of bleeding, thereby improving patient outcomes.8 Makris M et al., 2010; Aspirin inhibits platelet activation through TXA2 pathway but does not affect activation through ADP pathway. Clopidogrel inhibits platelet activation through ADP pathway. As it blocks platelet activation by a mechanism different from aspirin, the combination therapy with aspirin may offer benefits over either drug used alone.

According to the CURE trials, clopidogrel and aspirin decrease the rate of the combined end point of cardiovascular deaths, non-fatal MI or stroke by 20% in patients with acute coronary syndromes when compared to aspirin. High-risk patients presenting with acute coronary syndromes should receive clopidogrel on admission at conservative centers and if appropriate after coronary angiography in aggressive centers. In the hospital where our study was done, this combination has been in use for more than 5 years, and it was found to reduce the mortality rate of patients within a year of acute coronary syndromes significantly. The only major side effect seen was GI bleeding and bleeding at arterial puncture sites 9. However, it is essential that a simple, inexpensive and widely approved test, like aPTT and INR, be available for clinical use, occasionally, in patients with severe hemorrhagic complications, recurrent thrombotic episodes or before percutaneous interventions and surgery.

Aspirin was prescribed in low dose for treatment and prevention of IHD. Its use is justifiable with the total number of patients with cardiovascular disease. However, it should be prescribed with caution in patients aged 80 years or more due to lack of evidence for benefit versus risk, O’Donnell M et al., 2008 10. Prescribing drugs with a generic name, avoiding irrational use of drugs, and poly-pharmacy can help in reducing the cost of treatment and economic burden. Presence of multiple co-morbidities and use of more parenteral and antimicrobial drugs are responsible for greater economic burden in expired than survived patients.

CONCLUSION: This study was concluded in brief that major complications are seen with oral anticoagulants which emphasise the need for a constant monitor and patient education. The therapy with these drugs needs to be cost-effective and reduce the complications associated with their use. Improving patient knowledge on correct dosage will boost up the present healthcare in the hospital setting. However, it seems prudent to choose the anticoagulant drug therapy on a patient-specific basis. Effective work practices that minimize the risk and improve the quality of life; educational and regulatory interventions were needed which includes improving the knowledge, and professional behavior of pharmacists, pharmacy assistants, and drug sellers will determine the final impact on the health system.

ACKNOWLEDGEMENT: I would like to express heart full thanks to my guide and the administrations of Karnataka College of pharmacy for their support and blessings.

CONFLICT OF INTEREST: Certify that we have no conflict of interest.