ABSTRACT: The main objective of the present study was to develop and evaluate the simvastatin noisome using different grades of nonionic surfactants. It was hypothesized that niosomes would increase in vitro release of simvastatin in comparison to the API Mumbai. Niosome were prepared by thin-film hydration method and evaluated for particle size, entrapment efficiency, PDI, and in vitro release. The different niosomes shows various mean particle size, but Span 60 containing Niosomes have higher particle size than Span 80. Both optimized formulations of Span 60 and Span 80 have particle size 225.40 and 261.4. The PDI, entrapment efficiency of these optimized formulations was found to be 0.153, 0.167 and 85.72 ± 2.10, 81.44 ± 3.83, respectively. Niosomes prolonged the release of Simvastatin and provided a sustained release pattern. From the current study, it may be concluded that formulation F2 containing 2:1 (Span 60: Cholesterol) and F8 containing 1:3 (Span 60: Cholesterol) were found to be high % of entrapment efficiency and desired sustained release of simvastatin. Span 60 is a better non-ionic surfactant for preparation of noisome in comparison to Span 80, and niosomal drug delivery system of simvastatin is a simple and effective approach to produce nanoparticles of poorly water-soluble drug to enhance the release. These niosomes will probably reduce the frequency of administration of Simvastatin.

INTRODUCTION: Niosome is the vesicular system formed from the self-assembly of a hydrated nonionic surface-active agent, which can enhance the bioavailability of the drug; thus, the encapsulated drug provides therapeutic action in a controlled manner for a long period of time 1. Niosomes increase the pharmaceutical profile of API, improve patient compliance, and reduce the side effects of drug 2.

Niosomes are composed of the bilayer of non-ionic surface active agent, in which medicament is encapsulated; thus noisome acts as a depot from which drug release in a controlled manner.

The therapeutic activity of the drug may improve 3, 4. Delay clearance of drug molecule from blood circulation. The bilayer protects the drug from gastric, biological, or enzymatic environment. Niosome also restricting the effect to target cells. Structurally noisome are similar to the liposome but in the case of noisome the bilayer is made up of non – ionic surfactant rather than the phospholipids 5. Niosomes are lamellarin structure. They may be lamellar or multilamellar 6, 7. Simvastatin is derived synthetically from fermentation products of Aspergillus terreus 8.

It is used to treat hyperlipidemia. Simvastatin, when hydrolyzed, produces beta, delta, dihydroxy acid, which is similar to HMG – CoA (Hydroxyl methyl glutaryl CoA) in structure. So hydrolyzed simvastatin competes with HMG – CoA for HMG – CoA reductase. Thus the quantity of mevalonic acid reduces which is the precursor of cholesterol due to interference with this enzyme, and level of cholesterol decreases 9. Being a BCS class II drug simvastatin shows poor water solubility.

First pass metabolism is a major problem that results in low bioavailability (5%) 10. The biological half-life is 3 h, so dose repetition is required, which may cause various adverse effects such as gastrointestinal complaints, fatigue, headache, and rash. Simvastatin may cause a minor increase in serum creatine phosphor kinase, which may be associated with myopathy 11.

On the other hand, all the formulations of simvastatin are available in the immediate release drug delivery system .this system shows instant drug release due to rapid disintegration. These formulations fluctuate the drug plasma level due to fast increase and decrease in dissolution, which results in loss of effect of drug and increase in effects 12.

Materials: Simvastatin was obtained from Sun pharmaceuticals, Gurgaon. Cholesterol Span 60 and Span 20 were purchased from SDFCL, fine chemical ltd. Mumbai. All other reagents and solvents used were of analytical grade.

Formulation of Niosomes: Multi lamellar niosomes of Simvastatin were prepared by handshaking method. In this method, a mixture of vesicles forming ingredients of different grade non-ionic surfactants and cholesterol were dissolved in a volatile organic solvent (diethyl ether, chloroform or methanol) in a round bottom flask.

The organic solvent was removed at room temperature (20 °C) using a rotary vacuum evaporator, with the deposition of a thin layer of the solid mixture on the wall of the flask. The dried surfactant film rehydrated with an aqueous phase at 0-60 °C with gentle agitation. This process formed typical multi-lamellar niosomes.

Particle Size and Poly-Dispersity Index (PDI): The simvastatin niosomes were characterized for morphology viz. particle size and PDI. The average particle size and PDI of niosomes were evaluated by photon correlation spectroscopy zeta sizer nanoplus-3 (Japan). All the samples were appropriately diluted and analyzed by using 1ml cuvette in a thermostatic chamber at 250C using a He-Nelaser.

Entrapment Efficiency: 1.0 ml of niosomal formulation was taken and centrifuged at rpm 10000 to separate niosomes from non-entrapped. The supernatant was collected and diluted with a 6.8 pH buffer. Then absorbance was taken at 234 nm by the UV Spectrophotometer. The percentage of drug entrapment efficiency (EE %) was calculated by using the following formula.

Where, EE% is the percent entrapment efficiency, and ED is the amount of entrapped drug.

In-vitro Release Profile: In-vitro release was studied using a dialysis membrane were investigated using dissolution apparatus. Niosomal formulations (1 ml) and API were placed in the donor compartment of K.C cell, and the acceptor compartment was filled with pH 6.8 buffer. The temperature of the receptor medium was maintained at 37 ± 5 ºC and agitated at 50 rpm speed using a magnetic stirrer. Aliquots of 5 ml sample were withdrawn periodically, and after each withdrawal, same volume of medium was replaced. The collected samples were analyzed at 234 nm in a Double beam UV-VIS spectrophotometer.

Pre formulation study: The physical appearance and melting point of the drug Simvastatin sample under investigation was found to be the same as that of the official reports. UV- VIS estimation of simvastatin was done by UV- VIS spectrophoto-meter. The calibration curve was prepared in methanol. The data was regressed to obtain a straight line. The R2 value was found to be 0.996 in methanol, indicating good linearity. The solubility of simvastatin was determined in aqueous and organic solvents. It was found to be freely soluble in methanol, sparingly soluble in Phosphate buffer of pH 7.4, pH 6.8, and 1.2N HCl, or insoluble in water.

Particle size: The particle sizes of the various developed formulations containing Span 60 were determined by Zeta sizer and found to be 559.2, 225.40, 582.3, 375.7 nm. It was clearly observed from the result, as shown in Table 2 that the mean vesicle size of the formulations containing Span 80 was found to be 472.7, 317.6, 302.2, 261.4 nm, which shows that the niosomes containing Span 80 having a smaller particles size than Span60. This might be due to the higher hydrophobicity of Span 80 than Span 60. The decrease in surface free energy with increasing in hydrophobicity of Span 80 also contributes to particle size reduction.

The polydispersity indexes of the different formulations containing Span 80 were found to be 0.290, 0.239, 0.215, and 0.167, respectively. Formulation F2 having PDI 0.167< 1, which shows better homogeneity of sample than the other formulations. 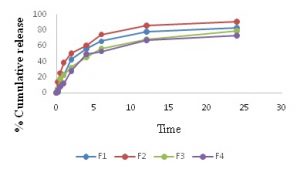 The in-vitro release of F8 formulation is found to be 12.32 ± 6.45 at initial 15 min and 85.57 ±7 .61at 24 h, which is better than the other formulations, so F8 formulation considered as optimized formulation among all the rest formulations containing Span 80 based on better particle size, entrapment efficiency, and in vitro-release. 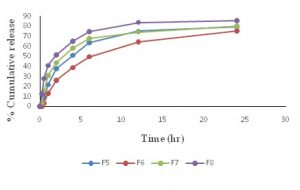 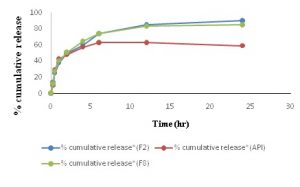 CONCLUSION: An effort was made to formulate the simvastatin niosomes to get better in vitro release. From the comparative study of the experimental result, it may be concluded that formulation F2 containing 2:1 (Span 60: Cholesterol) and F8 containing 1:3 (Span 60: Cholesterol) were found to be high % of entrapment efficiency and desired sustained release of simvastatin. The particle size of simvastatin niosomes was obtained in nanosize, ranges (225.40 nm and 261.4 nm), which demonstrated that our prepared niosomes are in optimum size. The dissolution of nanosized simvastatin was significantly enhanced when compared with pure simvastatin. On the other hand, it may observed that both the optimized formulations containing different non-ionic surfactant showed different particle size, PDI, entrapment efficiency, and in-vitro release. When both optimized formulation compared, it revealed that the Span 60 having better release than the Span 80. Thus, we conclude that the Span 60 is a better non-ionic surfactant for the preparation of noisome in comparison to the Span 80 andniosomal drug delivery system of simvastatin is a simple and effective approach to produce nano particles of poorly water-soluble drug to enhance the release.