In the Indian systems of medicine, most practitioners formulate and dispense their own recipes; hence this requires proper documentation and research. In the western world also, the use of herbal medicines is steadily growing with approximately 40 percent of the population reporting use of herbs to treat medical illnesses in the past few years 2. WHO strongly supports the promotion and development of the rational use of traditional medicines throughout the world. According to a recent estimate of WHO, 70- 80% of the world population, especially in developing countries, rely on traditional medicine, mostly plant drugs, for their primary health care needs 3.

The traditional system of medicine is certainly a cheap and potential source of drugs owing to their time-tested efficacy and without recognizable adverse effects 4. The lack of potent anti-inflammatory drugs now actually in use prompted studies to be conducted on various plants. Impatiens balsamina is one of the traditional plants with a wide range of medicinal properties. Impatiens balsamina locally known as Khujang in Manipuri, belonging to the family Balsaminaceae, is a succulent ornamental herb with a thick but soft stem. It is commonly found in southern Asia. It is commonly known as garden balsam and is an annual herb possessing a wide range of medicinal uses. It comes in a wide variety of flower colours and forms, ranging from bright single flowers to double flowers.

The flowers are red, pink, purple, or white and the fruits are pale green dehiscent capsules containing small globose reddish seeds. The different parts of the plant are used to treat disease and skin afflictions; the leaves, seeds, and stems are also edible if cooked. Impatiens balsamina L. has been used as indigenous medicine in Asia to treat rheumatism, fractures, and fingernail inflammation. In Korea, Impatiens balsamina has been used in traditional oriental medicine to treat scrofulosis, carbuncles, and dysentery 5. It is found abundantly in Manipur and is widely used for its medicinal properties. The seeds contain 36-38% fixed oil, with proteins, alkaloids, saponins and essential oils making up the rest of the composition. Although seed extract or oil has been reported to possess antimicrobial activity, antioxidant activity, antitumor activity, and a stimulatory effect on the immune system, its full potential as an antimicrobial agent has not been exploited 6. Even though there are various reports of Impatiens balsamina, there is a lack of scientific data to substantiate them. Therefore, the present study has been undertaken to evaluate the anti-inflammatory properties in suitable animal experimental models.

Aims and Objects: To evaluate the anti-inflammatory properties of Impatiens balsamina Linn. in experimental animal models.

Plant Material: The fresh leaves of Impatiens balsamina were collected from around the Imphal area during the month of June-July 2010, identified and authenticated by Dr. Athokpam Pinokiyo, Assistant Professor, Department of Botany, DM College of Science, Imphal. A plant sample was deposited at the Department herbarium, Manipur University, and allocated Account no. 004225 of MUH.

Preparation of the Plant Extract: The leaves were cleaned, dried under shade, powdered by a mechanical grinder, and stored in an airtight container for future use. Preparation of the aqueous extract was done following the method of Verma and Agarwal 7 with slight modifications. Eighty grams of the powdered leaves were extracted with distilled water using a Soxhlet apparatus. The brownish extract obtained was evaporated, shade dried, scrapped out, weighed, and stored in a glazed porcelain jar for future use. The final yield was 29.5%.

Toxicity Testing: The aqueous extract of Impatiens balsamina was administered at doses 100, 200, 400, 800, 1600, and 3000 mg/kg, per orally to groups of mice, each group consisting of 10 mice and mortality was observed for 24 h. No sign of toxicity was observed up to the dose of 3000 mg/kg. The study was conducted in the Department of Pharmacology, Regional Institute of Medical Sciences (RIMS), Imphal after getting approval of the Institutional Ethics Committee, Regional Institute of Medical Sciences, Imphal.(No.1596/GO/a/12/CPCSEA).

Anti-Inflammatory Activity: Anti-inflammatory agents have been evaluated by studying the inflammatory response produced in the animals by injecting foreign or noxious agents. These responses mostly comprise the development of oedema and/or the formation of exudates and granuloma 8.

The term Anti-inflammatory has many connotations that multiplicity of assays is required to affirm this property in any chemical compound 9.

Method: Healthy albino rats of Wistar strain of either sex weighing between 100-200 gm were used throughout the present experiment.

They were collected from Central Animal House, RIMS. Animals were kept for 3 days under laboratory conditions before any experimental work.

Animals were fed a standard pellet diet and water ad libitum and maintained at 24-28 ºC temperature and 12 hour day and night cycle. The rats were divided into five groups, with six animals in each group. This arrangement was used throughout the present experiment. The drugs were suspended in 2% gum acacia and administered orally at a uniform volume of 10 ml/kg body weight of the animals.

The volume of medicaments was kept constant at 1 ml/100 gm bodyweight of the animals. Both control and treated groups in a particular series received the same phlogistic agent. Paw volume was measured by the modified plethysmometric method described by Singh H and Ghosh MN8

Determination of Percentage of Inhibition of Oedema: The calculation of percentage inhibition of oedema formation after premedication with standard drug and indigenous drug under study was done according to the method adopted by Tomar A et al. 9.

Cotton Pellet Implantation: The method as described by Ghosh MN and Singh H10 was followed.

Method: Cotton pellets cut from dental rolls to size approximately 0.5 × 0.5 cm and weighing 20 ± 1 mg were sterilized at 120 ºC for 2 h. They were then soaked in 0.2mldistilled water containing Penicillin (0.1 mg) and Streptomycin (0.13 mg) and then inserted one in each axilla into anesthetized rats (with ether). Groups of rats as described before were treated with the test drug, standard, and control for 6 days.

On the seventh day, after ether anaesthesia, the cotton pellets and the granuloma were dissected carefully and dried in an incubator at 37 ºC for 24 h. Any increment in the dry weight was taken as a measure of granuloma formation. Then the percentage inhibition of granuloma formation was calculated for the various doses of the test drug and Aspirin as compared to the control group.

Granuloma Pouch: The method described by Selye H11 with slight modification was adopted.

Method: Rats were anesthetized with ether, and a subcutaneous dorsal pouch was prepared in between the shoulder blades by injecting 20ml of air. Then, 0.5 ml of turpentine oil was injected into the pouch. Groups of rats were treated with varying doses of the test drug, Aspirin and control per oral for six days beginning from the day of pouch formation.

On the seventh day, the pouch was opened under ether anesthesia and the exudates were sucked out and the amount measured. The percentage inhibition was then calculated for the different groups of drugs as compared to the control group.

Formaldehyde Arthritis: The method described by Selye H12 with slight modification was used.

Method: A subcutaneous injection of 0.1ml of 2% formalin was given under the plantar aponeurosis of the right hind foot of the rats. The paw volume was measured plethysmometrically for 13 days to assess the degree of inflammation. Groups of animals, as described before, were treated with varying doses of test drug, gum acacia and Aspirin per oral daily for 13 days.

Statistical Analysis: All values were expressed as Mean ± SEM. The results were statistically analyzed. The data thus obtained were subjected to statistical analysis using one-way anova followed by Dunnet’s“t” test for significant differences between different groups. p-value of <0.05 was considered as significant.

A) Tests on Sub-Acute Inflammation:

Cotton Pellet Implantation: Table I shows the activity of the aqueous extract of the leaves of Impatiens balsamina on sub-acute inflammation as tested on cotton pellet implantation. 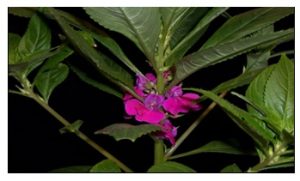 The cotton pellet granuloma model has been adopted to assess the anti-inflammatory activity of IB on the proliferative phase of sub-acute inflammation. It is probable that Impatiens Balsamina possesses anti-kinin activity and inhibits the proliferative phase of subacute inflammation 4. AEIB produced a significant reduction of granuloma formation in rats in the cotton pellet induced granuloma model. During the repair process of inflammation, macrophages, neutrophils, fibroblasts and multiple small blood vessels are the basic sources of forming a highly vascularized, reddish mass termed granuloma 15. The AEIB inhibited the formation of this granuloma. The granuloma pouch experiment was done by the method of Selye H 16. The anti-inflammatory activity of Impatiens balsamina was profound and highly significant in the granuloma pouch model. Since granuloma represents the late exudative and proliferative phases of inflammation, the present study indicates that AEIB possesses anti-inflammatory activity against the subacute inflammatory condition. AEIB has shown potent inhibitory action on exudates formation. Kinin is the main mediator of granuloma, as it not only vasodilates but also increases the vascular permeability in the early stages of inflammation 17. The mean value of exudate in the control group was 3.66 ± 0.33 (Mean ± SEM), which corresponds to the findings of VM Shastry et al (2.68 ± 0.08) 18. 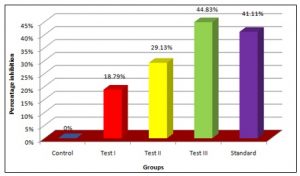 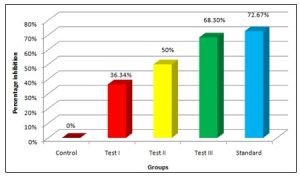 FIG. 3: EFFECT OF AQUEOUS EXTRACT OF IB ON SUB-ACUTE INFLAMMATION AS TESTED BY GRANULOMA POUCH METHOD 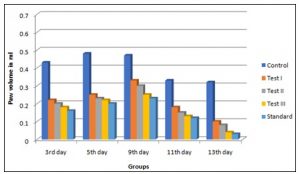 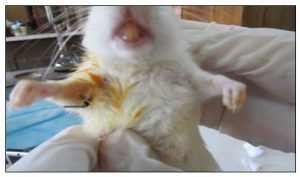 The significant reduction of paw volume by aqueous extract of leaves of Impatiens balsamina Linn may suggest its effectiveness in arthritis. Inhibition of formalin induced pedal oedema in rats is one of the most suitable test procedures to screen anti-arthritic and anti-inflammatory agents as it closely resembles human arthritis. Injection of formalin subcutaneously to into the hind paw of rats produces localized inflammation and pain. The nociceptive effect of formalin is diphasic, an early neurogenic component followed by a later tissue mediated response. Thus formalin-induced arthritis is a model used for evaluation of an agent with probable anti-proliferative activity 15. Therefore the AEIB appears to be effective against formalin-induced arthritis. AEIB contains anthocyanins, Cox-2 inhibitory naphthoquinones, kaempferol glycosides, and flavonoids such as quercetin. Flavonoids have been shown to possess various biological properties related to antioxidant, anti-nociception and anti-inflammatory mechanisms by targeting reactive oxygen species and Prostaglandins, which are involved in the late phase of acute inflammation and pain perception 19. It can be concluded that the anti-inflammatory and anti-nociceptive action of the aqueous extract of Impatiens balsamina may likely be due to the presence of these compounds, either singly or in combination. However, further studies are needed to isolate the active constituents responsible for the observed effect and to reveal the possible mechanism of action responsible for the analgesic and anti-inflammatory activity of Impatiens balsamina. The present study's findings show that the aqueous extract of the leaves of Impatiens balsaminaLinn has significant anti-inflammatory activity without any significant adverse effects. Further studies on the active constituents present in IB are necessary to understand the mechanism of action. 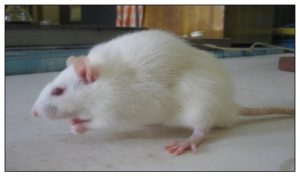 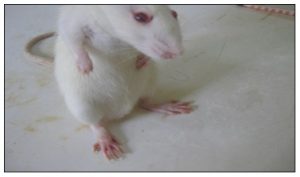 ACKNOWLEDGEMENT: The investigators thank all the staff and faculty of the Department of Pharmacology, RIMS, for allowing smooth conduct of the experiments.