ABSTRACT: Controlled and targeted drug delivery system is more advantages than conventional dosage in various aspects. In the case of treating colonic disorders such as inflammatory bowel disease, the drugs do not reach the site of action in appropriate concentration. Thus there is a need to develop effective and safe therapy for the treatment of these colonic disorders, using site-specific drug delivery approach. The present study was aimed to develop microbially triggered osmotic pump so as to achieve colon specific delivery of dexamethasone. The microbially triggered colon-targeted osmotic pump (MTCT-OP) based tablets are prepared by using two types of polymers chitosan and pectin. The tablet is formulated by using directly compressible method, which consists of an osmotic core (drug and chitosan with organic acid as excipient) and (drug and pectin with organic acid as excipient) with an inner semi-permeable membrane layer composed of the mixture of cellulose acetate and chitosan powder and an outer enteric-coating layer of eudragit® L100-55. Then a comparative study of this formulation was done. It was found that shows F4S2E1 better results than P4M2C1. The % drug content in the case of F4S2E1 and P4M2C1 was found 99.02 ± 0.03 and 98.68 ± 0.04, respectively. The cumulative % drug release study showed that maximum drug release was found in the case of F4S2E1 and P4M2C1 was 99.027 ± 0.47 and 95.027 ± 0.47 respectively at 24 h. The results from various evaluations show that formulation code F4S2E1 and P4M2C1 are found to be optimized batch. In both formulations, F4S2E1 shows better results in all parameters. The drug was almost completely released in SCF after 24 h.

INTRODUCTION: The oral route is the most convenient and preferred route for the drug delivery system but the colon-targeted drug delivery system (CDDS) has been more focus for studies in recent years due to its potential to improve treatment of local diseases affecting the colon, with minimum systemic side effects 5. Some examples of disease states which impact the colon include 6 Crohn’s disease (CD), ulcerative colitis (UC), and irritable bowel syndrome (IBS).

Targeted drug delivery into the colon is highly desirable for local treatment of a variety of bowel diseases such as ulcerative colitis, Crohn’s disease, amebiosis, colonic cancer, and systemic delivery of drugs 7. The aim of a targeted drug delivery system is to provide a desired drug concentration in the body by delivering a therapeutic amount of drug to a target site 8.

It is suitable and required for the drugs having instability, low solubility and short half-life, a large volume of distribution, poor absorption, low specificity, and therapeutic index 9. Targeting may provide maximum therapeutic activity (by pre-venting degradation or inactivation of the drug). Meanwhile, it can also minimize adverse effects, the toxicity of potent drugs by reducing dose 10. The oral route is the most convenient and important method for the administration of drugs for systemic effect. Drug delivery systems for treating colonic disorders such as inflammatory bowel disease are failing as the drugs do not reach the site of action in appropriate concentration 11. Thus, there is a need to develop effective and safe therapy for the treatment of these colonic disorders, using a site-specific drug delivery approach 12.

However, the development of such a system is a challenging task for pharmaceutical technologists 13. The available conventional dosage forms are not very much effective in the treatment of diseases as they are absorbed in the upper gastrointestinal tract, which may lead to many adverse effects 14. Dexamethasone is a drug of choice to treat inflammatory bowel disease 15. It is well documented that dexamethasone can be completely absorbed in the upper gastrointestinal tract when free dexamethasone is simultaneously administered orally 16. This rapid and complete absorption of dexamethasone can easily cause systemic side effects like osteoporosis, depression, insomnia, dyspepsia, abdominal distension, congestive heart failure in susceptible patients 16.

The present study was aimed at developing a microbially triggered osmotic pump so as to achieve colon-specific delivery of dexamethasone 17. This could help in the effective treatment of inflammatory bowel disease for a prolonged time at site of action and reduction in dosing frequency18. Moreover, this may increase patient compliance and reduction in adverse effects.

Formulation Development: Dexamethasone was pre-mixed with a small amount of chitosan and followed by mixing of other ingredients. The resultant powder was directly compressed into tablets 19.

Then a coating of cellulose acetate in acetone containing of pore-forming agent (chitosan) was carried out in pan coater provided hot air blower (Macro Scientific works, New Delhi, stainless steel pan, 50 cm diameter). After coating, the tablets were dried for 12 h at 50 °C. Then different concentrations of Eudragit® L100-55 were used to coat on the surface of microporous semipermeable membrane 20. The surface of formulated MTCT-OP tablet had a smooth and uniform appearance 21. The same steps were followed for pectin tablets. The process is done in the following steps.

Preparation of Core Tablets: Dexamethasone was pre-mixed with a small amount of chitosan and pectin respectively by speculation, followed by mixing manually for 10 min with the remaining chitosan and other ingredients 22. The resultant powder mixture was sieved through 100 mesh screen and directly compressed into tablets using 8.0 mm standard concave punches on a single punch tablet machine 23. The core compositions are listed in Table 1 and 2.

After coating, the tablets were dried for 12 h at 50 ºC to remove residual solvent 23. The microporous semipermeable coating formulations used are listed as shown in Table 3 and 4.

Enteric Coating: Different concentrations of Eudragit® L100-55 were used to coat on the surface of microporous semipermeable membrane 24. The surface of MTCT-OP tablet had a smooth and uniform appearance. Coated tablets were dried for 4 h at 40 ºC. Total weight gain by different coating solutions was 5%, as shown in Table 5-6 and Fig. 1-2.

Uniformity of Weight: For determining the uniformity of weight, twenty tablets were weighed individually and collectively. The weight variation was calculated 25. The same procedure was used for coated tablet. The results are described in Table 7-8.

Hardness: The hardness of core tablet was determined by Monsanto Hardness Tester26. The results are presented in Table 7-8.

Friability: The friability of the core tablet was determined by Roche fribilator 27. The values are presented in Table 7-8.

Thickness: The thickness of the tablet was determined by screw gauge 28. The determination of thickness was carried out after each coating. The results are presented in Table 7-8.

Diameter: The diameter of the core tablet was determined with the help of Vernier Caliper 29. The results are described in Table 7-8.

Drug Content: The uniformity of drug content in each formulation was determined by triturating 20 tablets, and powder equivalent to average weight was added to 100 ml of 5.0 pH PBS followed by stirring for 30 min.

The solution was filtered through Whattman filter paper, diluted suitably, and absorbance of the resultant solution was measured using double beam UV spectrophotometer 1700 E at λmax 242. The results are shown in Table 7-8.

In-vitro Dissolution: In-vitro dissolution studies for the optimized formulation of both chitosan and pectin-based tablets were carried out in USP XXV dissolution test apparatus (basket method) (Electolab TDL-08L). The tablets were tested for drug release for 2 h in 0.1 N HCl (900 ml) as the average gastric emptying time is about 2 h. Then the dissolution medium was replaced with phosphate buffer pH 6.8(900 ml) and tested for drug release for 2 h. Then the dissolution medium was further replaced with 100 ml phosphate buffer pH 7.4 with pectinase contained in 200-ml beaker, and immersed in water maintained in 900 ml vessel, which in turn was in the water bath of the apparatus 29. 5 ml samples were withdrawn at predetermined time intervals for period 18 hr and replaced with the equal volume of the same dissolution medium. The samples were filtered, and the concentration of the drug was obtained by measuring the absorbance at 242 nm using a double beam UV-spectrophotometer (1700-E, Shimadzu). The content of the drug was calculated using the equation generated from the calibration curve. The test was performed in triplicate 29. As shown in Table 9-10 and Fig. 3-4.

Scanning Electron Microscopy Studies: In order to elucidate the mechanism of drug release from developed formulations, surface of coated tablets, both before and after dissolution studies, was studied for optimized formulation by using scanning electron microscope (SEM) (Leo-430, EDAX England) as  shown Fig. 5-8. 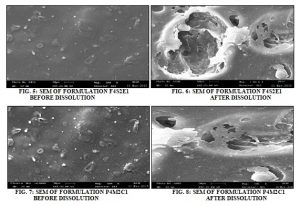 The test was carried out by placing the tablets of each selected formula in a closed glass container in an ALU Blister pack and stored in thermostatically controlled ovens adjusted at different temperatures and humidity percentage, namely, 40 ºC/75%, 30 ºC/65%, and 25 ºC/ 60% for a period of 3 months. The results of the optimized formulations F4S2E1 after conducting accelerated stability studies for 3 months are as in Table 11 to 14 and Fig. 11-12.

RESULTS AND DISCUSSION: The microbially triggered systems of dexamethasone based on chitosan and Pectin for colonic targeted drug delivery are formulated. The tablets are formulated by a direct compression method followed by enteric coating. Then tablets are evaluated for various parameters.

The in-vitro release shows that the drug as almost completely (99.247±0.54) released in SCF after 24 h. It also be seen that there was no significant variation in the physical appearance, average weight, hardness, and loss of drying after stability study for a period of 3 months.  From the results, it also had been concluded that drug-containing chitosan polymer shows best results than pectin polymers, and Thus Colon targeted drug delivery was achieved by using a chitosan-based osmotic tablet with complex film and a multilayer coating system. These findings are extremely important from a commercial point of view as the prepared formulation removes the drawback of degradation and poor dissolution profile of dexamethasone and improves its effect.

CONCLUSION: In the study new microbially triggered system based on chitosan and pectin for colonic targeted drug delivery is formulated. The results from various evaluations show that formulation code F4S2E1 and P4M2C1 are found to be optimized batch. In both formulations, F4S2E1 shows better results in all parameters. The drug was almost completely released in SCF after 24 h. The basic mechanism of colon-targeted osmotic pump formulation was based on the gellable property at acid conditions and colon-specific biodegradation of polymers. The SEM indicated that both polymers were accessible to enzymatic degradation, which allowed the in situ formation of delivery pores for releasing drugs under conditions that may be expected in the colon for a long time. Thus the developed system was found to be a potential system for targeting and controlling the release of drug to the colon achieved by using chitosan and pectin based osmotic tablet.

CONFLICTS OF INTEREST: The authors confirm that this article's content has no conflict of interest.