Diabetes is a debilitating metabolic disorder characterized by chronically elevated blood glucose level above the normal range and affects mostly all kind of populations epidemiologically.

Objectives: In clinical situations, diabetic patients already on prescription of Rosiglitazone are prone to bacterial infection. To cure such infection Clarithromycin is prescribed particularly in Respiratory Tract Infections.

Materials and Methods: Diabetes was induced experimentally in overnight fasted Rats by intraperitoneal injection of Nicotinamide, 15 min prior to intraperitoneal injection of Streptozotocin (60 mg/kg). Nicotinamide (160 mg/kg) was freshly prepared by dissolving in distilled water and Streptozotocin was dissolved in freshly prepared 0.1M Citrate buffer. Since Rosiglitazone and Clarithromycin have found to exert minimal to mild toxicity in animals on these doses, i.e. 80 mg/kg and 400 mg/kg respectively, both these drugs were administered for 14 days to the animals to study the toxicity in diabetic condition. Parameters included for the study includes body weight changes, oral glucose tolerance test, biochemistry, hematology, urine analysis and histopathology.

Conclusion: Study inform about the two different class of drug which clinically can be used together. Though the combination has shown some promising effects on liver and renal functions in terms of Hepatotoxicity and Nephrotoxicity, concern about the reduced TGL and testicular toxicity cannot be over-looked and thus, further research is warned in this direction.

INTRODUCTION:Diabetes mellitus is one of the most rapidly growing diseases worldwide, and is a prime cause of excess cardiovascular morbidity and mortality in Western populations.

Other serious morbidities and mortalities are related to development of nephropathy (kidney damage), neuropathy (nerve damage), and retinopathy (blindness) due to diabetes.

Despite tremendous advances in medicine during the past century, there is still no cure, which means that effective prevention and treatment is of paramount importance to prevent future increases in disease burden 1, 2.

Various types of drugs are available in the market to treat type 2 Diabetes mellitus. Among them all, Thiazolidinedione class of drug are highly sensitive and usually prescribed by physicians. Thiazolidinediones (TZD) are known as insulin sensitizing agents since they work by improving the action of insulin, independently of the pancreas. Rosiglitazone and pioglitazone are the two agents currently available. Rosiglitazone is effective as monotherapy in the treatment of type 2 diabetes 3.

Macrolides like Clarithromycin, Azithrimycin and Roxithromycin etc., are widely used drugs clinically. Diabetic patients, on treatment of Rosiglitazone prescribed by physician, if develops upper respiratory tract infection, which is being treated by macrolide likes antibiotics. Clarithromycin being easily available and having good potential to treat these infections have been selected for this study. Enough rodent data on toxicity of both these drugs i.e. Rosiglitazone and Clarithromycin, in diabetic condition is not available.

Chemicals: Streptozotocin (Lot-L25919) was obtained from Alexis Biochemicals, Mumbai. Nicotinamide (Batch no.-833544) was obtained from Sisco Research Laboratory (SRL), Mumbai. While both Rosiglitazone and Clarithromycin were the active pharmaceutical ingredients of Wockhardt Ltd, India.

Induction of Diabetes: Diabetes was induced experimentally in overnight fasted Rats by intra-peritoneal injection of Nicotinamide (160 mg/kg), 15 min prior to intraperitoneal injection of Streptozotocin (60 mg/kg). Nicotinamide was freshly prepared by dissolving in distilled water and Streptozotocin was dissolved in freshly prepared 0.1M Citrate buffer immediately before use 6.

Experimental Design: 48 animals were weighed, randomized and divided into 8 groups (6 animals each, Table 1), and were given following treatment for 14 days by Oral route. Rosiglitazone (80 mg/kg) and Clarithromycin (400 mg/kg) both were suspended in 1% Tween 80, with the help of sonicator.

TABLE 1: GROUPING OF THE ANIMALS

Oral Glucose Tolerance Test: OGTT was performed on day 1 and 14 of the experiment. The rats were food deprived for 12 hr prior to the administration of an oral glucose load (2 g/kg body weight, 200 mg/ml). Blood samples were drawn by retro-orbital puncture method at 0, 30, 60, 90, and 120 min after glucose feeding. Collected blood samples were centrifuged at 3500±50 rpm for 15 min and serum was separated.

Biochemistry Analysis: Approximately 1ml blood was collected from each animal (n=4) by retro-orbital sinus in 1.5ml tubes (Tarsons Products Pvt Ltd., Kolkata India). Blood was allowed to clot and was incubated for half an hour in incubator and centrifuged at 10000 rpm at temp. 18-22oC for 10 minutes by Hermle-Z323K centrifuge machine. Biochemistry analysis was done by autoanalyser (Dade Behring-Dimension Xpand). The parameters studied were glucose, ALT, ALP, AST, BUN, CHOL, and CREA.

Histopathological Studies: The formalin fixed tissue pieces from liver, heart, kidney, lung, testis, and adrenals were serially dehydrated in alcohol and cleared in xylene and were embedded in paraffin blocks. The micro sections (4-5 microns thick) were cut and stained in hematoxylin and eosin (H&E) using standard method and examined for histopathological changes. 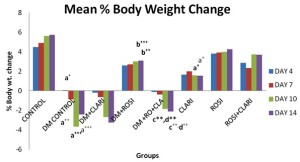 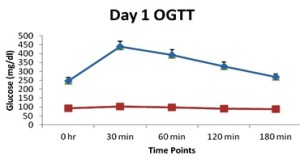 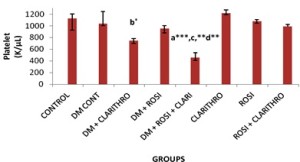 Blood Glucose: Serum glucose values remained high in all Diabetic groups compared to Control. Serum glucose levels were significantly increased in Diabetes with Clarithromycin treatment group. Rosiglitazone showing its glucose lowering potential by lowering glucose in diabetic animals, but not showing its activity of glycemic control with its full potential when used in combination with Clarithromycin. Mean ± S.E.M values are shown in figure 4. 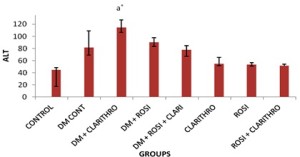 Data are analyzed by One way Anova followed by Boneferroni post test. a*= P<0.05when compared to Clarithromycin.

Data are analyzed by One way Anova followed by Boneferroni post test. 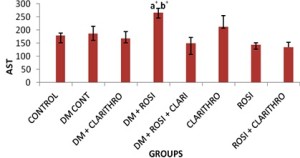 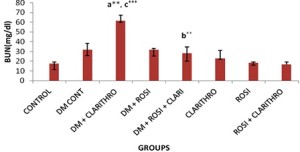 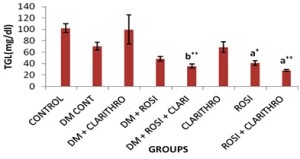 Lipid Peroxidation: Membrane damage indicated by increased Malondialdehide production was higher in all the groups including Diabetic Control when compared with Control (fig. 10). 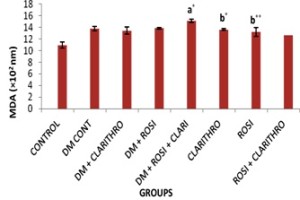 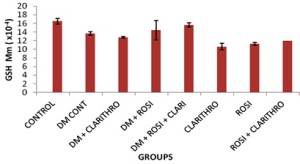 Data are analysed by One way Anova followed by Boneferroni post test.

The formalin fixed tissue pieces from liver, heart, kidney, lung, testis, and adrenals were serially dehydrated in alcohol and cleared in xylene and were embedded in paraffin blocks. The micro sections (4-5 microns thick) were cut and stained in hematoxylin and eosin (H&E) using standard method and examined for histopathological changes.

Liver, Kidney, Lungs and Testes organs were identified as target organs for Clarithromycin toxicity in diabetic and non-diabetic animals, whereas, for Rosiglitazone, liver and heart appeared to be target organs of toxicity on overall pathology evaluation during this study.

DISCUSSION: Based on various studies, clinically it was concluded that Rosiglitazone was associated with a significant increase in the risk of myocardial infarction and with an increase in the risk of death from cardiovascular causes that had borderline significance 9. There have been several conflicting reports regarding their effects on the liver that ranged from no toxicity to fatal acute liver failure 10.

Rosiglitazone therapy has been reported to increase respiratory tract infections 3, Macrolide and Ketolide being important antibiotics of choice for such infections, are commonly indicated for use in upper and lower respiratory infections and has a well established safety and efficacy profile. Macrolide antibiotics inhibit bacterial protein synthesis. Clarithromycin and Azithromycin are used to treat MAC and other nontuberculous mycobacteria.

Clarithromycin alters the metabolism of many other drugs that are metabolized by CYPs, leading to many potential drug interactions 11. Clarithromycin induced hepatotoxicity is worldwide known 12. Reports suggest that Clarithromycin is also associated with nephrotoxicity 13.

In Haematology, only platelet count was significantly reduced in Diabetic + Clarithromycin group while mild reduction was seen in Diabetic+ Rosiglitazone group, indicating that the drugs have potential to reduce platelets in DM 3, 16.

In Biochemistry, levels of Glucose, ALT, AST, ALP, BUN and TGL were significantly altered. The decreased glucose levels than DM control in DM + Rosiglitazone group along with improved glucose tolerance & overall condition of animals, were indicative of classical anti-diabetic activity of Rosiglitazone 3.

This interesting observation indicates some sort of drug-drug interaction (but this time positively unlike adverse effect on glucose in combination (Figure 5 and 6). BUN levels were also significantly found to increase in Diabetic + Clarithromycin group as compared to Diabetic Control indicating Clarithromycin’s nephrotoxicity 13.

Triglyceride levels were markedly raised by Clarithromycin in Diabetic state. Rosiglitazone showed reduction in TGL levels that was as per the reports 17. However, combination of both the drugs in diabetic state showed a significantly reduced TGL level which indicates Rosiglitazone’s additive effect (Figure 9). Similar effect of Rosiglitazone was observed in non-diabetic treatment group too.

CONCLUSIONS: From the above study following conclusions can be drawn;