ABSTRACT: Asteracantha longifolia, Asparagus falcatus, Vetiveria zizanioides, Coriandrum sativum and Epaltes divaricate have proven hepatoprotective and antioxidative effects against carbon tetrachloride and paracetamol induced hepatotoxicity in mice and are widely used in Sri Lanka for the treatment of liver disorders. However, toxicological information regarding their safety after exposure to experimental animals or humans is not available. The present study was designed to evaluate repeated dose toxicity of the five aqueous extracts mentioned above. Healthy, ICR mice were treated with 0.9g/kg (orally) of aqueous extracts daily, for a period of 30 days. Animals were observed for effects on body weight, food consumption, external appearance and mortality. Biochemical, haematological and histopathological parameters were estimated in all groups at the end of 30 days. Aqueous extracts tested didn’t produce mortality, changes in behaviour, difference in body weight, feeding habits or any other physiological activities in mice, at the dose administered. Biochemical or haematological analysis showed no marked differences in any of the parameters examined in either the control group or in the plant extract treated groups. No evidence of histopathological lesions was observed in any of the organs tested. The aqueous extracts of all five plant extracts at a dosage of 0.9g /kg were free from any toxic effects when administered for a period of 30 days to ICR mice

INTRODUCTION: According to the World Health Organization, 80% of Asian and African populations rely on traditional medicine for their primary health care needs 1. The scenario in the developed countries is very similar with 70% to 80% of the population using some form of complementary and alternative medicine 2.

Although conventional medical science has powerful methodologies for proving efficacy, ensuring quality, standardizing good manufacturing practices, testing for safety and conducting post marketing surveillance for adverse effects, similar guidelines are lacking for herbal products. Adverse health effects associated with herbal products exist since time immemorial and they could be attributed to both the inherent toxic effects of herbal medicine and toxicities induced by adulterants or contaminants 1.

Medicinal plants contain many active chemical compounds and substances of great complexity like mucilage, polyphenols, polysacharrides etc which may modulate or modify the effects of the active principles. Thus, some herbal remedies can be toxic or can act either as an agonist or antagonist of the active principle 3. Therefore, study of toxicity is an essential prerequisite for the assessment of efficiency of plants extracts.

Asteracantha longifolia which belongs to the family Acanthaceae is a perennial herb with an ascending rhizome. It is used as a diuretic, antidysenteric and aphrodisiac in addition to its action against hepatic disorders in the traditional ayurvedic medicine in Sri Lanka. Asparagus falactus is a tall subscandent with terete, smooth, armed branches and branchlets with spines. It belongs to the family Liliaceae. Tuberous root is used in chronic congestion of the liver, jaundice, gall stones and chronic nephritis.

Vetiveria zizanioides (Family- Graminae) is a perennial herb with a branched densely tufted rootstock with long, spongy, aromatic root fibers. Root of Vetiveria acts as a bitter stomachic, carminative, cholagogue and is useful in acute and chronic congestion of the liver and jaundice.  Coriandrum sativum belongs to the family Umbelliferae and it is an herb emitting a very definitive odour when rubbed. It is used as a diuretic, tonic and aphrodisiac and in the treatment of liver diseases. Epaltes divaricata is a divaricately branched annual herb found in Sri Lanka which belongs to the family Compositae. It is also used for the treatment of jaundice, urethral discharges, dyspepsia and flatulence in ayurvedic medicine in Sri Lanka 9.

Since we have already proven their hepatoprotective and antioxidative activities against carbon tetrachloride and acetaminophen induced hepatotoxicity, the aim of this study was to determine the sub chronic toxicity of these five medicinal plants, Asteracantha longifolia, Asparagus falcatus, Vetiveria zizanioides, Coriandrum sativum and Epaltes divaricata in ICR mice biochemically, haematologically and histopathologically.

Whole plants of Asteracantha longifolia, tubers of Asparagus falcatus, roots of Vetiveria zizanioides, seeds of Coriandrum sativum and whole plants of Epaltes divaricata were collected from Galle district in the Southern province of Sri Lanka.  The sample was identified and authenticated in comparison with the herbarium specimen preserved at the National Herbarium in the Botanical Gardens, Peradeniya, Sri Lanka.  Voucher specimens were deposited at the Department of Biochemistry, University of Ruhuna, Sri Lanka.

Normal therapeutic dose for humans (60 g for a 70 kg man) was extrapolated to be dosed in mice according to the calculation given based on the surface area to body weight ratio in Dhawan and Srimal 10. Each mouse was administered a dose of 0.9 g/kg orally by gavage. The extract given was prepared daily from the dried plant material. Only a single oral dosage of 0.9 g/kg each was administered daily over a period of one month.

Healthy male ICR (Institute of Cancer Research) mice 6-8 weeks old and weighing 30-35 g, were used. The animals were allowed free access to water and pelleted food ad libitum.  The protocols used in the study were approved by the ethics committee of the University of Ruhuna, Sri Lanka, guided by the CIOMS (Councils for International Organizations of Medical Sciences) international guiding principles of biomedical research involving animals.

Effect of the plant extracts on liver function:

Healthy, ICR mice were randomly divided into six groups of six animals in each. Group one was given distilled water once daily for one month. Group two to six were given the extracts of the five plants used in the study daily for one month orally by gavage. At the end of the experiment all animals were sacrificed and blood was drawn. A fraction of blood was collected to dry, clean centrifuge tubes. The serum was separated immediately and serum levels of ALT, AST and ALP were estimated.

Effect of the plant extracts on haematological parameters:

Experiment was carried out as described above. At the end of experiments remaining fraction of the volume of blood was collected into clean, dry sample bottles containing dry anticoagulant sodium EDTA. Haemoglobin concentration, red blood cell count, white blood cell count and packed cell volume were estimated by the methods described in the Manual of Basic Techniques for a Health Laboratory, WHO (Anonymous, 1980).

Effect of the plant extracts on histopathology of various body organs:

The experiment was carried out as described above. The liver, kidney, heart, lung, intestine and spleen of the animals were excised and fixed in buffered formalin. Transverse sections of these organs were then prepared using a microtome and the sections were stained with haematoxylin and eosin.

There was no treatment related mortality, clinical signs and symptoms in mice treated with any of the five plant extracts. Mice used in the study were active throughout the period of study regardless of the treatment they received. Food intake was normal during the entire period of investigation. No abnormalities in the external appearance were noted. No loss of body weight was observed. The effects of the five plant extracts on the serum levels of ALT, AST and ALP are shown in the Table 1. There were no statistical differences between the mean enzyme levels in the drug treated groups and the mean enzyme levels in the distilled water treated mice (P>0.5).

The results of the effects of the aqueous extracts of the five plants used on the haematological parameters, haemoglobin concentration, red blood cell count, white blood cell count and packed cell volume are summarized in Table 2. There were no statistical differences between the mean values in the drug treated groups and the mean values in the distilled water treated control groups (P>0.5). No evidence of histopathological lesions were observed in any of the organs studied (Fig 3-8). 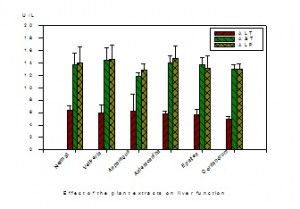 FIG. 1: EFFECT OF PLANT EXTRACTS ON LIVER FUNCTION. Each plant extract was administered at 0.9g/kg dosage daily for one month. Level of significance was considered as P<0.05 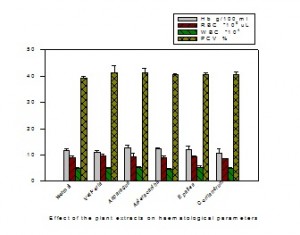 FIG. 2: EFFECT OF PLANT EXTRACTS ON HAEMATOLOGICAL PARAMETERS. Each plant extract was administered at 0.9g/kg dosage daily for one month. Level of significance was considered as P<0.05

DISCUSSION: The use of herbal medicinal products and supplements has increased tremendously over the past three decades with not less than 80% of people worldwide relying on them for some part of primary healthcare.  Over the previous decade, the use of herbal medicines represented approximately 40% of all healthcare services delivered in China while the percentage of the population which has used herbal medicines at least once in Australia, Canada, USA, Belgium, and France was estimated at 48%, 70%, 42%, 38%, and 75%, respectively 11. The general perception that herbal remedies or drugs are very safe and devoid of adverse effects is not only untrue, but also misleading. Herbs have been shown to be capable of producing a wide range of undesirable or adverse reactions some of which are capable of causing serious injuries, life-threatening conditions, and even death. Numerous and irrefutable cases of poisoning have been reported in the literature.

There are groups of plant alkaloids with well-established hepatotoxicity. The pyrrolizidine alkaloids found in herbal teas or enemas containing Crotalaria, Senecio, Heliotropium or Symphytum damage the hepatic central vein endothelia, causing veno-occlusive disease that may be lethal or require transplantation. Germander, broadly used in France as an antipyretic for treatment of abdominal discomfort and for weight reduction, contain hepatotoxic alkaloids identified as furano diterpenoids that, after activation by hepatic cytochrome P450 3A, deplete glutathione and precipitate hepatocyte necrosis, apoptosis and cytoskeletal disorganization 12.

Tripathi et al 13 reported that prolonged exposure of rats to vetiver oil at a dosage of 1500mg/kg/day and more exerted a mild haematotoxic effect and also altered the lipid metabolism in rats. Since we have encountered no reported data of toxic or unacceptable effects of the parts of the plant extracts or the animal model used in this study, an investigation was carried out to evaluate any toxic effects mediated by the administration of five plant extracts on liver function, some haematological parameters and the histopathology of various organs in the body using ICR mice as the experimental model. Results showed that the five plant extracts studied were free of any toxicological effects at the dosage used in the study. The dosage was selected based on the therapeutic dosage prescribed for humans by ayurvedic medical practitioners in Sri Lanka which was extrapolated to mice.

No significant difference was observed in the body weight between mice in the control group and plant treated groups. Severe growth depression as a consequence of reduced food intake is a common phenomenon if plant extracts are toxic to the experimental animals. Also, the analysis of blood parameters is relevant for evaluation of risk as it is widely used as predictors of toxicity to humans and animals.

It is a good index of physiological and pathological status in humans and animals and usually parameters such as haemoglobin concentration, total red blood cell and leukocyte counts and packed cell volume are measured. No significant difference was found in any of these parameters between the control group and the plant treated groups. Elevation of enzymes such as ALT and AST is a consequence of hepatocellular damage and elevation of ALP results due to biliary obstruction. Heart, liver, spleen, intestine, kidney and lung are the primary organs affected by the metabolic reactions induced by the toxicants. Our results suggested that the aqueous extracts used in the study were not toxic on any of these organs. 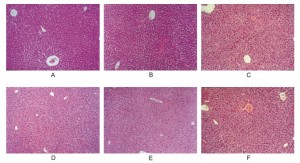 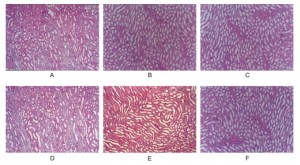 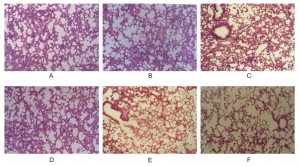 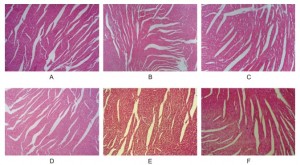 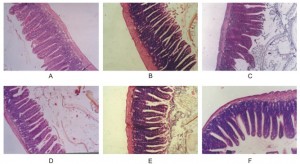 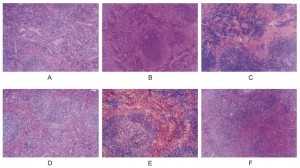 CONCLUSION: Sub-chronic administration of the five aqueous plant extracts showed no significant adverse effects on the biochemical and haematological parameters tested. Histopathological studies also showed appearance of normal architecture of the vital organs in the plant extract treated mice. Therefore, it can be concluded that the aqueous extracts of Asteracantha longifolia, Asparagus falcatus, Vetiveria zizanioides, Coriandrum sativum and Epaltes divaricata are safe and non-toxic at the normal therapeutic dosage tested in this study.

1. Neergheen-Bhujun VS: Underestimating the toxicological challenges associated with the use of herbal medicinal products in developing countries. Biomed Research International 2013; 804086.