It is widely used in routine Ayurvedic practice in the treatment of various diseases such as Prameha (diseases due to faulty metabolism), Bahumootrata (polyuria), Dhatuksheenata (depletion of dhatus), Napumsakatwa (impotency), Madhumeha (diabetes mellitus), Prameha Pidaka (diabetic carbuncles), Shwetapradara (leucorrhoea) etc. 2 Clinical efficacy of TB is proven in lowering blood glucose level and also found effective in urinary tract symptoms 3. In spite of significant therapeutic effectiveness, there are much hues and cries about the practice of Ayurvedic preparations containing heavy metals 4, 5. The hour's need is to clear the apprehensions concerning the heavy metal contents in Ayurvedic medicines. Considering the need to ascertain the safety aspects, an investigation was undertaken to elucidate the toxicity profile of trimetallic Ayurvedic medicine Trivanga Bhasma.

Experimental Animals: 30 male wistar strain rats aged 8 – 10 weeks, weighing between 120-140 gms, were randomly divided into five groups, containing 6 animals in each group. The animals were kept in standard conditions of 25 °C ± 2 °C and relative humidity 55% ±15% with artificial lighting in a sequence of 12 h light/dark cycle. Animals were housed in standard polycarbonate cages fitted with stainless steel top grill with rodent feeder shield. The animals had free access to conventional laboratory feed of standard composition and drinking water.  The initial weights were recorded and conditioned for 5 days to initiate the experiment. The proposed experimental protocols were approved by Institutional Animal Ethics Committee (Registration number 28/1999/ CPCSEA).

The study was performed according to the CPCSEA guidelines for the care and use of animals 12. The experiment was performed by following Organization for Economic Cooperation and Development (OECD) guideline 407 13. The classics of Rasashastra describe the dose of TB as 1 Ratti to 2 Ratti (≈125-250 mg). The dose for the experimental study was calculated by extrapolating the maximum recommended human dose to animal dose based on the body surface area ratio by referring to the table of Paget and Barnes 14. The suspension was made by mixing a weighed sample of TB with Honey: 2 parts and De-ionized water: 3 parts as per CCARS Guidelines for toxicity/safety profile evaluation of Bhasma/Raskalpas 15.

All experimental animals were observed daily for home cage activity and behaviour, respiratory pattern, motor activity, morbidity, and mortality. All animals were weighed weekly once and observed for food and water intake. On 29th day overnight fasted animals were weighed and were sacrificed. Blood samples were collected in centrifuge tubes and the serum was analyzed by using Erba Mannheim EM200 Analyzer. Parameters studied included blood sugar, blood urea, serum triglyceride, serum creatinine, serum bilirubin, alkaline phosphatase (ALP), serum glutamic oxaloacetic transaminase (SGOT), serum glutamic pyruvic transaminase (SGPT) and total protein. The animals were carefully dissected and a macroscopic examination of the viscera and internal organs was done. The vital organs, liver, and kidney were separated, their absolute weights were determined. After weighing, the organs were preserved in 10% formalin solution and a histopathological study was carried out.

Thiobarbituric Acid Reactive Substances (TBARS) was also estimated for lipid peroxidation in liver and kidney tissues. In the present study, the amount of tissue TBARS is measured by the Thiobarbituric Acid Assay as described by Buege and Aust 16. To carry out the test 100 mg of tissue was homogenized in 2 ml of 0.2M phosphate buffer. Then 0.5 ml of tissue homogenate was reacted with 2 ml of Thiobarbituric Acid and 0.5 ml of 10% Trichloro Acetic acid. The sample was boiled in a water bath for 30 min, cooled to room temperature, and centrifuged at 8000 rpm for 20 min. The absorbance of the supernatants was spectro-photometrically measured at 532 nm, against a blank that contained all the reagents minus the biological sample. TBARS concentrations were calculated by the use of distilled water as a standard. The results were expressed as µmol/g wet tissue weight.

Statistical Analysis: The data were expressed as mean ± standard deviation (S.D) and were analyzed by one-way analysis of variance (ANOVA). Values of P<0.05 were considered significant.

RESULTS & DISCUSSIONS: In the toxicity study, all the animals were quite healthy and active until the end of the experiment and abnormal behavioural changes were not observed in any animal, either in control or in the treated group.

No mortality, treatment-related clinical signs were observed in groups of TB at TED × 10, TED × 5, TED × 2 and TED dose levels during the experimental period.  No treatment effect was noted on food & water consumption and urine and faeces output were normal. On physical examination-respiratory character, lacrimation / salivation and gait were found normal.

TABLE 1: EFFECT OF 28 DAYS TREATMENT OF TB ON BODY WEIGHT IN ANIMALS

TABLE 2: EFFECT OF 28 DAYS TREATMENT OF TB ON SERUM BIOCHEMICAL PARAMETERS IN ANIMALS

Biochemical Parameters: The values of SGOT, SGPT, ALP, bilirubin direct & total, protein levels, serum triglyceride of animals treated with TB were found to be comparable with those of the control group animals. The blood glucose, urea and serum creatinine values of TB-treated animals were moderately affected, but the changes observed did not show a statistically significant level Table 2. Though a decrease in blood glucose in all test drug-treated groups did not show a statistically significant level, it is an indicator of the antihyperglycemic effect of the drug. It is to be noted that TB is used in the treatment of diabetes mellitus. But this can be ascertained by advanced studies on its hypoglycemic effect. Taking these values into interpretation, it may be inferred that the results do not show any pathological condition, thereby demonstrating the normal functioning physiological status.

A non-significant change in absolute and relative organ weights in all groups Table 3 also points towards the normal status of vital organs.

Histopathological Study: Vital organs – liver and kidney, were examined for histopathological changes. Sections of the liver showed normal architecture with well-maintained corts of hepatocytes Fig. 1, 3, 5, and 7. Hepatocytes consisted of granular cytoplasm and centrally placed single/double nuclei. No severe degenerative changes with marked disturbance in the cytoarchitecture of the liver were observed in any of the groups, except mild to moderate pathological changes in 10X group Fig. 9. The appearance of hepatocytes cytoplasmic degeneration and nuclear destruction may suggest that the drug interaction with proteins and enzymes of the hepatic tissue interferes with the antioxidant defense mechanism and leads to reactive oxygen species (ROS) generation, which in turn may induce stress in the hepatocytes to undergo atrophy and necrosis. Sections of kidney in all groups, including 10X showed normal cytoarchitecture with closely packed tubules and normal-appearing glomerulus, homogeneous eosinophilic cytoplasm and basally placed nucleus Fig. 2, 4, 6, 8, 10.

Tissue Analysis: Lipid peroxidation/Thiobarbituric Acid reactive substance (TBARS) level of liver tissue in 5X and 10X group and kidney tissue in 10X group has increased significantly Graph 1. It is an indicator of tissue injury induced by reactive oxygen species, which is measured as TBARS. It disrupts biological membranes and is thereby deleterious to their structure and function. In contrast, the TBARS value of 1X and 2X groups was found normal, which is suggestive of the normal status of the tissues. So undoubtedly, it indicates that TED (Therapeutic Equivalent Dose) and TED×2 (2 times the Therapeutic Equivalent Dose) of TB are not causing any harmful effects. 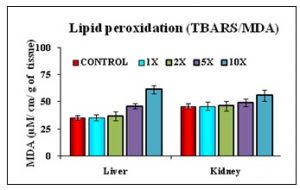 CONCLUSION: Repeated dose of 28-day oral toxicity study of Trivanga Bhasma (TB) carried out at different dose levels demonstrated no pre-terminal death, no abnormalities in physical, physiological and clinical chemistry and no gross necropsy changes. Evidently, steady weight gain, absolute and relative organ weight in all test groups indicates that TB has not caused any injurious effect on normal physiological functions of the body. Histopathological study and tissue analysis of vital organs of TED and 2x TED signify normal cytoarchitecture, divergence in cyto-architecture of the liver in the highest dose level 10x TED group strongly signify the importance of therapeutic dose. Overall results were suggestive that the formulation TB is safe when manufactured according to a classical method and administered in a defined therapeutic dose.