The epidermal growth factor receptor (EGFR) pathway has emerged as a key target in non-small-cell lung cancer. EGFR inhibition in non-small-cell lung cancer is achieved via small molecular tyrosine kinase inhibitors, such as erlotinib or Iressa (gefitinib), or monoclonal antibodies such as cetuximab. The EGFR is under investigation as a therapeutic target for cancers. Lung cancer cell lines are variably dependent on autocrine stimulation of EGFR since it has a role in signal transduction. We therefore examined the effects of a selective EGFR tyrosine kinase inhibitor Iressa 1 which is a synthetic molecule synthesized from a standard Iressa molecule. These compounds after docking with EGFR protein were found to possess good energy score and also highly inhibited the protein molecule indicating that this molecule showed anticancer activity on EGFR. The results of the pharmacokinetic study as well as the investigations pertaining to the ADME properties of  Iressa 1 by using ADME tool of TOPKAT (DS 2.5) had shown that Iressa 1  was nontoxic effect to female mouse and female rat (norms as per NTP carcinogenicity). Moreover, as per the FDA carcinogenicity value, it was found to be nontoxic to both male rat and male mouse. The pharmacokinetic results showed normal absorption rate, solubility, heptotoxicity, CYP2D6 and PPB values.

INTRODUCTION: The activities of epidermal growth factor receptor (EGFR) have been identified as key drivers in the process of cell proliferation, metastasis, angiogenesis, and dedifferentiation 1. It is present on the surface of many types of cancer cells. It has been shown that the EGFR-mediated drive is increased in a wide variety of solid tumors including lung cancer, prostate cancer, breast cancer, gastric cancer, and tumors of the head and neck. Heightened activity at the EGFR is caused by an increase in the concentration of ligand around the cell, an increase in receptor numbers or receptor mutation can lead to an increase in the drive for the cell to replicate.

It has been postulated that agents designed to block EGFR will inhibit signal transduction, resulting in multiple antitumor mechanisms, as well as enhancing chemotherapy and radiotherapy antitumor effects.

Lung cancer is usually caused by smoking or exposure to second-hand smoke. Researchers estimate that more than 90% of lung cancer in men and at least 70% in women are caused by cigarette smoking 2. Normally, there is a thin layer of mucus and thousands of tiny hairs (cilia) lining the inside of our breathing tubes within our lungs. The mucus and cilia act as a natural cleaning system for our lungs 3.

The EGFR is a transmembrane receptor with an extracellular ligand-binding domain, a helical trans-membrane domain, and an intracellular tyrosine kinase domain 4.

Activation of EGFR by epidermal growth factor (EGF) and other ligands (amphiregulin, TGF-a) which bind to its extracellular domain is the first step in a series of complex signaling pathways which take the message to proliferate from the cell membrane to the genetic material deep within the cell nucleus 5. EGF is a small mitogenic protein that is thought to be involved in mechanisms such as normal cell growth, oncogenesis, and wound healing.

Iressa works by blocking (inhibiting) signals within the cancer cells, which prevents a series of chemical reactions that cause the cell to grow and divide. It is known as a signal transduction inhibitor. The receptors allow epidermal growth factor (a particular protein present in the body) to attach to them. When the epidermal growth factor (EGF) attaches to the receptor, it causes tyrosine kinase to trigger chemical processes inside the cell to make it grow and divide.

Iressa attaches itself to the EGF receptor inside the cell, which blocks the activation of tyrosine kinase, and switches off the signals from the EGFR. It therefore has the potential to stop the cancer cells from growing. It works in a different way to both chemotherapy and hormonal therapy. Gefitinib is an EGFR tyrosine kinase inhibitor. It works by binding to the intracellular enzyme (tyrosine kinase) of the EGFR to directly block signals turned on by triggers outside or inside the cell. TOPKAT is a toxicity prediction program. 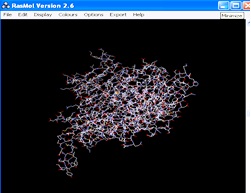 Activation of this receptor initiates signalling through a variety of downstream pathways, including those involving PI3K/Akt, Ras/Raf/mitogen-activated protein kinase (MAPK), and STAT3 that are important for a variety of cellular processes involved in the promotion of tumor growth, including proliferation, survival, angiogenesis, invasion, and metastasis[6].

The mechanism of the clinical antitumor action of gefitinib is not fully understood [8]. Gefitinib acts completively at the ATP-binding site of the EGFR on the surface of cancer cell to inhibit ligand-induced tyrosine phosphorylation, thereby blocking ligand-induced activation of the receptor and downstream pathways [6,8]. p63, a homologue of the human p53 tumour-suppressor gene, is overexpressed in a significant amount in a number of tumours, for example head and neck squamous cell carcinoma (HNSCC).

It also possesses oncogenic properties, including the potential to increase cell proliferation and antagonize apoptosis. A study conducted in SCC-012 cells demonstrates a dose-dependent decrease in p63 protein and messenger RNA levels over the course of gefitinib treatment4. Levels of phosphorylated MAPK decreased and p27KIP-1 levels increased after the treatment. It was also found an increase in G1-phase cells and a decrease in S-phase cells consistent with growth arrest. Therefore, gefitinib was shown to downregulate p63 expression at the messenger RNA level, which that p63 is a downstream target of EGFR signalling 9. The structure of Iressa molecule is shown in Figure 2. 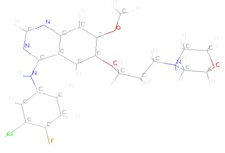 Iressa 1: Iressa 1 molecule was used as an inhibitor for EGFR and it was synthesized and modified from standard Iressa molecule. The structure of Iressa 1 is shown in Figure 3. 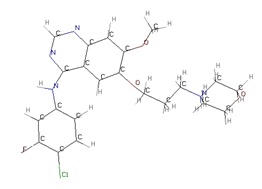 RESULTS AND DISCUSSION: The toxicological analysis of Iressa 1 using TOPKAT (DS 2.5) is summarized in Tables 1, 2, 3 and 4. The pharmacokinetics results have shown that Iressa 1

The results have clearly indicated that Iressa 1 is less toxic to the lab animals used in the present study. The absorption rate, solubility, heptotoxicity, CYP2D6 and PPB values were also found to be normal (Table 4).

CONCLUSION: The current investigation has clearly shown that the compound Iressa 1 has shown good results in the pharmacokinetics and pharmacodynamics study. Hence it can be used as a drug similar to Iressa. However, more research has to be done to confirm its efficiency.