INTRODUCTION: The process of crystallization in the urinary tract is due to a multi-factorial disorder in which the equilibrium between the promoting and inhibiting factors are broken. Several studies have been made in medical literature to explain the mechanism of urinary stone formation 1-3. The inhibitory activity of some urinary components like citrate, phytate, pyrophosphate, and glycosaminoglycan is well known but little attention has been paid to trace elements 4, 5. Therapeutic plants have been concerned as a traditional folk culture with the treatment of disease and action of remedial agents over generations throughout the world. The efficacy for their curative purposes is often accounted for in terms of their active chemical constituents and a number of trace elements.

So the quantification of major and trace elemental content of medicinal plants is very important as they are essential for the proper functioning of life processes. In the present study, the qualitative and quantitative analysis of only five extensively used anti-urolithiatic plants till date were carried out by Proton Induced X-ray Emission (PIXE) and Proton Induced Gamma Ray Emission (PIGE) techniques. PIXE and PIGE are rapid, simultaneous, non destructive multi-elemental analysis techniques. PIXE provides multi- element quantitative determination of elements with atomic no. (Z) >11 down to parts per million (ppm) levels while PIGE is a complementary technique and enables sensitive determination of elements upto Z<20.

Fresh samples of the selected anti-urolithiatic medicinal plants were collected from various areas of Manipur, a north eastern state of India for elemental analysis. The list of studied medicinal plants with their local names and the corresponding parts of the plants used for analysis is given in Table1. The plant samples were thoroughly washed with distilled water and dried in an oven at 60°C for about 48 hours. The dried samples were ground into fine powder by using an agate mortar. The powdered samples were thoroughly mixed with high purity graphite powder in the ratio 4:1 by weight for charge integration with better accuracy. The samples were further mixed with binder 200µl of polyvinyl alcohol liquid, dried under an IR lamp and then pressed into pellets of 2mm thickness and 13mm diameter with a pressure of 30kNm-2. Pellets of Certified Reference Materials cabbage (GBW 08504, China) and wheat flour (8436MS Dept. of Comm. NIST Gaithersburg MD 20899) were also prepared with the same procedure to check the accuracy of PIXE-PIGE setup and verification of the results 6.

PIXE and PIGE measurements were performed at Surface and Profile Measurement Laboratory at National Centre for Compositional Characterization of Materials (NCCCM), Department of Atomic Energy (DAE) Hyderabad, Government of India using 3MV Tandetron accelerator. In PIXE measurements, proton beam of energy 2.5MeV collimated to a beam of 3mm diameter and current 5-7 nA was used to irradiate the target (samples). The irradiation was carried out under vacuum (10-6 torr). The X-rays were detected by using a planar high purity germanium (HPGe) detector (Eurisys Measures type EGX 100-01, Be window thickness 40µm, FWHM of 150 eV at 5.9keV) placed at 45° to the beam axis. A 25μm mylar foil was served as X-ray exit window. The data was recorded on a PC based MCA.

The obtained PIXE spectral data corresponding to the studied plants were analyzed using GUPIX software package 7 which provides non linear least square fitting of the spectrum and converts raw spectral data into elemental concentration. Using this software package, concentrations of different elements present in each of the medicinal plants were calculated. For quantitative PIGE analysis the concentration Cx,samp of an element x in the analyzed sample was measured using the following equation 8, 9

where Yx is the yield of the measured gamma ray of the element x at proton energy E0 and S is the stopping power. The ratio of the stopping powers of the sample and reference material is taken one as their matrix elements are chosen same. 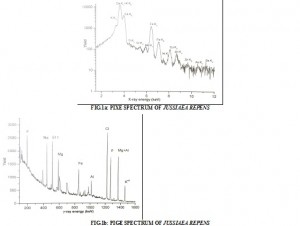 The typical PIXE and PIGE spectra of Jussiaea repens are presented in Fig. 1a and Fig. 1b respectively. PIXE spectrum shows the presence of essential trace elements like Ti, Cr, Mn, Fe, Ni, Cu, Zn, As, Se and Br along with the major elements K and Ca while PIGE spectrum indicates the presence of light elements F, Na, Mg, Al, P and Cl.

Note: the typical uncertainty in the measurements is about ±10%.  ND: Not detected

The role of trace elements in urinary stone formation is still unclear. It has been reported that the process of crystallization of supersaturated urine components and the formation of solid concretions can be modified by the activity of promoters and inhibitors and by some morphoanatomic, dietary and environmental factors 10. According to several studies in medical science, dietary Mg deficiency causes experimental urinary stone formation and high level of this element in urine reduce the concentration of oxalate available for calcium oxalate precipitation. Mg is considered as one of the most important inhibitors of stone formation in urinary tract. Studies showed decreased calcium oxalate in vitro crystallization and growth in the presence of supra-physiologic concentration of Mg. Urinary stones are more likely to develop and to grow larger if a person has low dietary magnesium. Magnesium inhibits stone formation 11.

It was also reported that diets low in calcium are associated with higher overall risk for urinary stone formation. Unlike supplemental calcium, high intakes of dietary calcium do not appear to cause urinary stones and may actually protect against their development. This is perhaps related to the role of calcium in binding ingested oxalate in the gastrointestinal tract. As the amount of calcium intake decreases, the amount of oxalate available for absorption into the bloodstream increases; this oxalate is excreted in greater amount into the urine by the kidneys. In the urine, oxalate is a very strong promoter of calcium oxalate precipitation- about 15 times stronger than calcium 12.

High dietary intake of potassium also appears to reduce the risk of stone formation because potassium promotes the urinary excretion of citrate, an inhibitor of calcium crystal formation. Diets rich in potassium have been associated with a reduction in kidney stone risk because the naturally occurring potassium salts in plant foods help to neutralize acidity in the blood stream. This prevents leeching of calcium from the bond to buffer the acid, which in turn reduces urine calcium, preventing its deposition in the form of a stone 13. It has been documented by some authors that trace elements such as Cu, Zn, Co, Ni, Al, Fe may act as inhibitors of calcium oxalate growth at very low concentrations 14. The role of selenium in urinary stone formation is poorly documented. However it may have some interactions with stone constituents or be captured in the structure of crystals incidentally. Furthermore, in some study it was reported a positive correlation between vanadium level and the content of magnesium phosphate salts. This element may promote the crystallization of phosphate containing crystals in the human urinary tract 15.

The elemental ratio has been reported clinically more important than the concentration of either of the elements. Calcium and Magnesium oppose each other at the intracellular level, thus low magnesium intake causes high calcium storage or calcification. Sodium and potassium also exist in a partnership and each important use of potassium requires sodium to maintain balance. Sodium to potassium ratio of less than 1 has been reported to be protective 16. Zn, Cu and Fe are essential mineral elements that exhibit important interactions and possible competitive inhibition of transport and bioavailability 17.

A number of inhibitory interactions among these elements could take place when high doses of a single element is given. Excessive absorption of zinc suppresses copper and iron absorption 18. And inhibition of zinc absorption by iron depends on their ratio19.

The studied five plants are often recommended by the local physicians in Manipur with increasing total fluid intake to more than two liters per day of urine output on the basis that they increase urineflow which will help pass the urinary stones. All the reported inhibitory major and trace elements like Mg, Ca, K, Cu, Zn, Co, Ni, Al, Fe are found to be present in the studied plants. The availability of good amount of Mg, Ca and K in the studied plants may also make these plants a natural source of dietary supplements. According to the present investigation it is hereby reported that major and trace elements present in these studied plants may play some inhibitory role in the urinary stone crystallization, however further investigations are needed.

CONCLUSION: The studied anti-urolithiatic medicinal plants contain fair amounts of reported inhibitory major and trace elements namely Mg, Ca, K, Cu, Zn, Co, Ni, Al, Fe and could be attributed a possible link to the curative medicinal values of their traditional use. The inter-relationship of several elements also suggests the studied plants of providing the elements to the body in bio-available form in a balanced manner with almost no harmful effects. This finding may support as an important resource for further studies in anti-urolithiatic medicinal plants.

ACKNOWLEDGEMENT: The authors are thankful to the staff of the Tandetron Accelerator, NCCCM for their constant support and assistance. The first author is also grateful to the Department of Science & Technology, Women Scientist Scheme-A Government of India, New Delhi for the financial support.