ABSTRACT: The research was carried out to formulate and evaluate ophthalmic solutions of Ofloxacin with amino acid transporters and compare the transcorneal permeation of Oflaxacin with that of the standard. In the study three different eye drop formulations were prepared by conjugation of the drug with different amino acids such as Alanine, Glycine and Leucine by solvent evaporation technique, the extent of transcorneal permeation of the drug was determined and compared with that of formulated standard Oflaxacin ophthalmic solution. The prepared formulations have been observed to play significant role in the process of maintaining structural and functional integrity of conjunctiva and retina. Permeation characteristics of drug were evaluated by introducing 1 ml of formulation on freshly excised cornea fixed between donor and receptor compartments of an all-glass modified Franz diffusion cell and measuring the drug permeated in the receptor cell by UV at 288nm. After 120 minutes, the permeation of standard Ofloxacin solution was found to be 0.02% and the permeation of the formulated conjugates of Ofloxacin with different amino acid transporters were higher when compared with the permeation of standard. Among the formulations, Ofloxacin conjugated with Alanine exhibited highest permeation which was found to be 9.7%. Therefore, trans corneal permeation of Oflaxacin can be attributed by conjugation with Alanine and is a viable option for enhancing corneal permeability

INTRODUCTION: The eye is one of the interesting organ in the human body due to unique protective mechanism of the eye 1. Hence, designing an effective therapy is often considered a challenging task in terms of attaining optimum drug concentration 2.  According to the Journal of Drug Delivery, a complete understanding of static and dynamic barriers of the eye is required to develop a drug delivery system for achieving therapeutic concentration at the target site 3.

The anterior segment is the front third of the eye that includes the structures in front of the vitreous humour: the cornea, iris, ciliary body, and lens. Within the anterior segment there are two fluid-filled spaces: the anterior chamber between the posterior surface of the cornea (i.e. thecorneal endothelium) and the iris. The posterior chamber between the iris and the front face of the vitreous 4. Besides, posterior segment is the back two-thirds of the eye that mainly consist of sclera, choroid, retina, vitreous humor, macula, and optical nerve.

A major problem being faced in ocular therapeutics is the attainment of an optimal concentration at the site of action. Poor bioavailability of drugs from ocular dosage forms is mainly due to the tear production, non-productive absorption, transient residence time and impermeability of corneal epithelium5. The research was proposed to formulate and evaluate ophthalmic solution of Ofloxacin with amino acids transporters by conjugation technique. The eye is a highly compartmentalized organ with several anatomical and physiological barriers. The partial barriers that isolate the eye from the rest of the body impede the effective passage of many drugs. Over the past two decades, several efforts have been made to increase the ocular bioavailability of drugs by enhancing the contact time of drugs with the target tissue, without compromising patient compliance.

Most nutrients are transported into the retinal cells by specific transport/receptor systems. Identification of such membrane transporters/receptors including peptide, amino acids, nucleoside and nucleobase, glucose, monocarboxylic acid, organic anion and organic cation transporters, led to the development of prodrugs for poorly permeating drug molecules. Transporter-targeted prodrugs offer several advantages including, improving the stability of parent drug molecule, altering the physicochemical properties such as solubility and lipophilicity; improving the pharmacokinetics properties and improving the permeability of drugs as the prodrugs become substrates for the influx transporters and simultaneously evade the efflux pumps 6.

Formulations of three different ophthalmic solutions of Ofloxacin-aminoacids were prepared by dissolving them in the vehicle. The drug-amino acid conjugates were prepared by solvent evaporation technique initially by dissolving equimolar quantities of the drug with corresponding amino acids such as Glycine, Alanine and Leucine in ethanol (50%v/v) and mixing the ingredients under short time heating at a temperature not exceeding 50°C to get three different clear alcoholic solutions. Then the solvent from each alcoholic solution was evaporated under vacuum conditions by using rotary evaporator. The white crystals obtained were dried in a desiccator over silica gel for one week and the dry crystalline powders coded as OGC, OAC and OLC (Oflaxacin with Glycine, Alanine and Leucine conjugates) were used for the formulations after confirmation of conjugation by TLC.

Preparation of the test solutions: 8

Ofloxacin with Glycine, Alanine and Leucine conjugates were dissolved in three different beakers with sufficient quantities of distilled water. Sodium chloride was added to make the final solution isotonic. pH of the solution was adjusted to 7.0 using 0.1N HCl and 0.1N NaOH. The final volume is adjusted with distilled water in quantities to maintain 3% v/v strength.

Preparation of standard Ofloxacin ophthalmic solution (OF): Standard Ophthalmic solution of Ofloxacin was prepared by using the pure drug Oflaxacin with different additives. Benzalkonium chloride was used as preservative. EDTA was used as chelating agent and sodium chloride was used for isotonicity, Hydrochloric acid and sodium hydroxide were used to adjust the pH of the solution.

Evaluation Methods: Eye drop formulations were evaluated for its pH, and visual appearance. pH was determined by using pH meter.

The whole eye ball of goat was transported from a local butcher shop to the laboratory in cold (4°C) normal saline (0.9% NaCl) within 1 hour of animal slaughtering. The cornea was carefully excised along with 2–4 mm of the surrounding sclera and washed with cold normal saline till the washing was free from proteins. The cornea was mounted by sandwiching the surrounding sclera tissue between clamped donor and receptor compartments of an all glass modified Franz diffusion cell in such a way that its epithelial surface face the donor compartment. The receptor compartment was filled with 10 ml of freshly prepared bicarbonate ringer solution (pH 7.0) and all air bubbles were expelled from the compartment.  1ml aliquot (1000µg/ml) of test formulation was placed on the cornea and opening of the donor compartment was sealed with aluminum foil to prevent the evaporation.

The receptor fluid was maintained at 37 °C with constant stirring, using teflon coated magnetic stirring bead. Three ml sample was withdrawn from receptor compartment at various time intervals up to 120 min. Each sample withdrawn was replaced immediately with an equal volume of buffer solution. From the three ml of withdrawn samples, one ml was analyzed spectrophotometrically by measuring absorbance at 288 nm for three trials. Results were expressed as amount permeated and % Permeability. The % Permeability was calculated as follows: 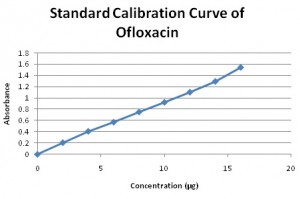 Permeation of Ofloxacin from the formulation: 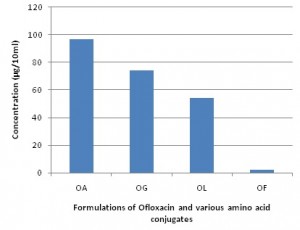 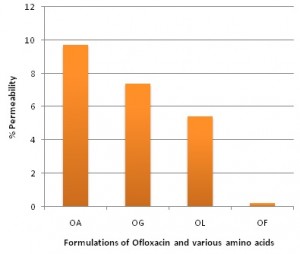 Percentage of corneal hydration of formulation:

TABLE 7: THE PERCENTAGE OF CORNEAL HYDRATION OF OFLOXACIN FORMULATIONS. 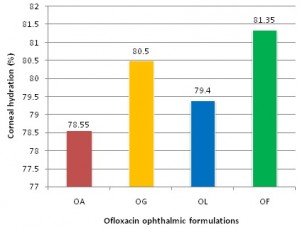 DISCUSSION: In the current study the ofloxacin was conjugated with three different amino acids by solvent evaporation technique and all the products obtained were good, the quantities of Ofloxacin and amino acids used for the conjugation were mentioned in Table 1 and all the three conjugates were observed to be white in colour, crystalline, odourless in nature found to exhibit pH 7 in solutions. All observations of physical characterization were mentioned in Table 2.

The prepared conjugates were used as pro drugs in the formulations of three different ophthalmic solutions and the ingredients with their quantities used were mentioned in Table 3. A standard formulation of Ofloxacin was prepared for comparison with Ofloxacin alone as active and the ingredients with quantities used were mentioned in Table 4. The standard calibration curve for Ofloxacin was prepared with the values of absorbance versus concentration obtained from the UV spectrophotometric analysis at 288nm which were represented in Table 5 and the standard graph was shown in Fig.1.

CONCLUSION: Based on the results obtained, it can be concluded that the conjugation of Ofoxacin with amino acids in ophthalmic formulations were proficient to enhance the transcorneal permeation of Ofloxacin. This study have proved that formulations of drug with amino acid conjugates have provide the maximum ocular bioavailability through excised goat's cornea. However, this study also revealed that, drug amino acid conjugates ophthalmic formulations does not harm the cornea layers which was evaluated by the corneal hydration. Hence, through the results of the study it can be concluded that amino acids can be as a healthier tool for targeted drug delivery to the posterior segment of eye since it fulfilled the requirements such as rapid release rate of drug, maximum percentage of drug permeation and also least percentage corneal hydration.  For Ofloxacin the amino acid Alanine has been found to be a best suitable one for conjugation as the formulation OA has been exhibited maximum trans corneal permeation of Ofloxacin.

There are so many other drugs which need to be indicated for posterior segment of the eye problems. Further studies can be done for example, conduct in vivo study in order to examine the permeability as well as their effectiveness. In depth research regarding this project are encourage to perform for further studies.

ACKNOWLEDGEMENT: The authors are grateful to all the people who are involved directly and indirectly in the research work.