ABSTRACT:Transdermal drug delivery system (TDDS) are topically administered medicaments in the form of patches that deliver drugs for systemic effects at a predetermined and controlled rate. It works very simply in which drug is applied inside the patch and it is worn on skin for long period of time. By this constant concentration of drug remain in blood for long time. Polymer matrix, drug, permeation enhancers are the main components of TDDS; polymers includes Zein, Shellac (as a natural) to synthetic ones (Polybutadiene, Polysiloxane, Polyvinyl chloride, Polyvinyl alcohol etc.). TDDS are of many types varying from single layer drug in adhesive to multi layer drug in adhesive and others are reservoir and the matrix systems. The market value of TDDS products are increasing with rapid rate, more than 35 products have now been approved for sale in US, and approximately 16 active ingredients are approved globally for use as a TDDS. Transdermal drug delivery is a recent technology which promises a great future it has a potential to limit the use of needles for administering wide variety of drugs but cost factor is a important thing to consider since developing nations like INDIA have second highest population, but due to higher cost TDDS are the hidden part of therapy used in general population.

INTRODUCTION: Transdermal drug delivery systems are topically administered medicaments in the form of patches that deliver drugs for systemic effects at a predetermined and controlled rate 1.

A transdermal drug delivery device, which may be of an active or a passive design, is a device which provides an alternative route for administering medication. These devices allow for pharmaceuticals to be delivered across the skin barrier 5.

In theory, transdermal patches work very simply.  A drug is applied in a relatively high dosage to the inside of a patch, which is worn on the skin for an extended period of time. Through a diffusion process, the drug enters the bloodstream directly through the skin.

Advantages of this route 6: This approach to drug delivery offers many advantages over traditional methods;

Kinetics of Transdermal Permeation: Knowledge of skin permeation kinetics is vital to the successful development of transdermal therapeutic systems. Transdermal permeation of a drug involves the following steps:

This permeation can be possible only if the drug possesses certain physiochemical properties. The rate of permeation across the skin is given by-

Where Ks is the partition coefficient for the interfacial partitioning of the penetrant molecule from a solution medium or a transdermal therapeutic system on to the stratum corneum, Dss is the apparent diffusivity for the steady state diffusion of the penetrant molecule through a thickness of skin tissues and hs is the overall thickness of skin tissues. As Ks, Dss and hs are constant under given conditions the permeability coefficient Ps for a skin penetrant can be considered to be constant. From equation (1) it is clear that a constant rate of drug permeation can be obtained only when Cd >> Cr i.e. the drug concentration at the surface of the stratum corneum Cd is consistently and substantially greater than the drug concentration in the body Cr. The equation becomes:

The face adhesive system should also fulfill the following criteria;

The Single-layer Drug-in-Adhesive system is characterized by the inclusion of the drug directly within the skin-contacting adhesive. In this transdermal system design, the adhesive not only serves to affix the system to the skin, but also serves as the formulation foundation, containing the drug and all the excipients under a single backing film. The rate of release of drug from this type of system is dependent on the diffusion across the skin 11. The intrinsic rate of drug release from this type of drug delivery system is defined by

The rate of drug release in this system is defined by:

Where Ka/r is the partition coefficient for the interfacial partitioning of the drug from the reservoir layer to adhesive layer 1, 9.

The Reservoir transdermal system design is characterized by the inclusion of a liquid compartment containing a drug solution or suspension separated from the release liner by a semi-permeable membrane and adhesive. The adhesive component of the product responsible for skin adhesion can either be incorporated as a continuous layer between the membrane and the release liner or in a concentric configuration around the membrane 11.

The rate of drug release from this drug reservoir gradient controlled system is given by:

The Matrix system design is characterized by the inclusion of a semisolid matrix containing a drug solution or suspension which is in direct contact with the release liner. The component responsible for skin adhesion is incorporated in an overlay and forms a concentric configuration around the semisolid matrix
11.

The rate of drug release from this type of system is defined as:

Where A is the initial drug loading dose dispersed in the polymer matrix and Cp and Dp are the solubility and diffusivity of the drug in the polymer respectively. Since, only the drug species dissolved in the polymer
can release, Cp is essentially equal to CR, where CR is the drug concentration in the reservoir compartment 8, 9.

Transdermal Market: The market for transdermal products has been in a significant upward trend that is likely to continue for the foreseeable future. An increasing number of TDD products continue to deliver real therapeutic benefit to patients around the world. More than 35 TDD products have now been approved for sale in the US, and approximately 16 active ingredients are approved for use in TDD products globally 12. Table 1 gives detail information of the different drugs which are administered by this route and the common names by which they are marketed; it also gives the conditions for which the individual system is used 13. 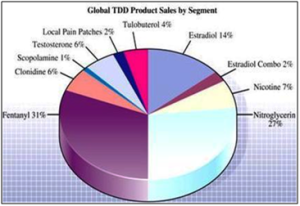 Drug in adhesive technology has become the preferred system for passive transdermal delivery; two areas of formulation research are focused on adhesives and excipients. Adhesive research focuses on customizing the adhesive to improve skin adhesion over the wear period, improve drug stability and solubility, reduce lag time, and increase the rate of delivery. Because a one-size-fits-all adhesive does not exist that can accommodate all drug and formulation chemistries, customizing the adhesive chemistry allows the transdermal formulator to optimize the performance of the transdermal patch 12.

A rich area of research over the past 10 to 15 years has been focused on developing transdermal technologies that utilize mechanical energy to increase the drug flux across the skin by either altering the skin barrier (primarily the stratum corneum) or increasing the energy of the drug molecules. These so-called “active” transdermal technologies include iontophoresis (which uses low voltage electrical current to drive charged drugs through the skin), electroporation (which uses short electrical pulses of high voltage to create transient aqueous pores in the skin), sonophoresis (which uses low frequency ultrasonic energy to disrupt the stratum corneum), and thermal energy (which uses heat to make the skin more permeable and to increase the energy of drug molecules). Even magnetic energy, coined magnetophoresis, has been investigated as a means to increase drug flux across the skin 12.

CONCLUSION: Transdermal drug delivery is hardly an old technology, and the technology no longer is just adhesive patches. Due to the recent advances in technology and the incorporation of the drug to the site of action without rupturing the skin membrane transdermal route is becoming the most widely accepted route of drug administration. It promises to eliminate needles for administration of a wide variety of drugs in the future.