ABSTRACT: The skin covers a total surface area of approximately 1.8 m2 and provides the contact between the human body and its external environment. Transdermal route of drug delivery has gained great interest in pharmaceutical research as it overcomes many problems associated with the oral route of administration. Although the skin, particularly the stratum corneum presents a barrier to most drug absorption, it provides a large (1.2 m2) and accessible surface area for drug diffusion. Recently, various strategies have been used to augment the transdermal delivery of bioactives. Mainly, they include iontophoresis, electrophoresis, sonophoresis, chemical permeation enhancers, magnetophoresis, microneedles, vesicular systems (liposomes, niosomes, elastic liposomes such as ethosomes, transfersomes and transethosomes). Among these transethosomes appear to be more promising as they possess both lipophilic and hydrophilic regions and can accommodate drug molecules with a wide range of solubility. Transethosomes can deform and pass through a narrow constriction that is 5 to 10 times less than its own diameter. This high deformability gives better penetration of intact vesicles. These vesicles can be used for transdermal delivery of various classes of drugs like analgesics, anesthetics, corticosteroids, sex hormones, anticancer agents insulin etc.

INTODUCTION: At present, the most common form of drug delivery is the oral route. While this has the notable advantage of easy administration, it also has significant drawbacks-namely poor bioavailability due to hepatic metabolism (first pass) and the tendency to produce rapid blood level spikes (both high and low), leading to a need for high and/or frequent dosing, which   can be both cost prohibitive and inconvenient. Continuous intravenous infusion is recognized as a superior mode of drug administration not only to bypass hepatic ‘first pass’ metabolism but also to maintain a constant and prolong drug level in the body.

But that requires hospitalization of the patients and close medical supervision of administration. At the same time transdermal route offers number of advantages over conventional delivery systems such as lower fluctuations in plasma drug levels, gastrointestinal side effects and high patient compliance. Stratum corneum is the most difficult barrier which does not allow passage of most of the drugs; except lipophilic and low molecular weight drugs 1, 2.

Ultra deformable vesicles (UDV) have recently become a promising tool for the development of improved and innovative dermal and transdermal therapies 3. Deformable vesicles like transethosomes present the advantages of being nontoxic and thermodynamically stable formulations. They have been used for dermal and transdermal delivery of many molecules including peptides and proteins. In addition, their production is relatively simple and easy to scale up.

Currently, there are various types of UDV that have been successfully developed for both pharmaceuticals and cosmeceuticals, particularly transfersomes, ethosomes, and, more recently, transethosomes 4. The term transethosomes and the underlying concept were introduced by Song et al., in 2012, and are characterized by having a high content of ethanol (upto 30%) together with an edge activator. Transethosomes may contain advantages of both transfersomes and ethosomes. The mechanism of skin penetration might be a fusion of both mechanisms. 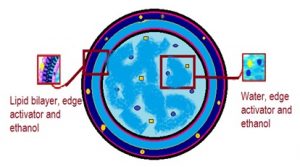 Transethosomes and its Mechanism: Trans-ethosomes represent novel lipid formulation which contains phospholipids, ethanol in high conc. of 30 to 40%, edge activators like tween 20, tween 60, tween 80, span 60, span 65, span 80, sodium cholate or sodium deoxycholate and water. They show the advantages of both ethosomes and transfersomes. The size range lies between 40 nm to 200 nm depending upon the drug. Ethanol is a central character of transethosomal system giving unique identity to it as a vesicular system. It is thought that the first part of mechanism is due to ‘ethanol effect’, whereby intercalation of the ethanol into intercellular lipids increasing lipid fluidity and decreases the density of the lipid bilayer.

Lipid layer of stratum corneum is fluidized by impact of ethanol and its high concentration in transethosomes that promote malleability and flexibility of these systems enhancing their penetration through tiny openings formed in stratum corneum due to fluidization. Alcohol amount in vesicular system also control its diameter as it provides net negative charge to vesicle surface reducing its size. 30 - 40% is optimum concentration range of ethanol for the formation of stable ethosomes. Reducing ethanol concentration to 20% may lead to increase in vesicular size. Phospholipids have an integral role in bilayer formation; consisting of hydrophilic head and hydrophobic tail 5.

FIG. 2: PERMEATION AND PENETRATION OF TRANSETHOSOMES THROUGH SKIN

Advantages of Transethosomal Drug Delivery: In comparison to other transdermal and dermal delivery systems

TABLE 1: SHOWS THE COMPARISON BETWEEN ETHOSOMES AND TRANSETHOSOMES 12

Methods of Preparation: Mechanical dispersion, cold method and hot method are the methods used for the preparation of transethosomes. Cold method is the most commonly used method.

Hot Method: Disperse phospholipid in water by heating in a water bath at 40 ºC to obtain a colloidal solution. Ethanol and glycol are mixed and heated upto 40 ºC. Organic phase is added to aqueous phase. Stir for 7 to 10 min. Depending on its hydrophilic/hydrophobic properties, drug can be dissolved in water or ethanol. Temperature is maintained at 40 ºC throughout the preparation. Size of the vesicles is reduced by probe sonication 13.

Cold Method: Dissolve phospholipid in ethanol by vigorous stirring. This mixture is heated upto 30 ºC in water bath. Water is heated upto 30 ºC in a separate vessel and added to the alcoholic mixture slowly in a fine stream. Depending on drug solubility, it can be dissolved in water or ethanol. The mixture is kept on magnetic stirrer at 700 rpm during the addition of the above aqueous solution to ethanolic solution. Modulation of vesicle size can be done using probe sonicator.

Mechanical Dispersion Method: Lipid and surfactant is taken in clean, dry, round bottom flask. Lipid mixture is dissolved in solvent mixture of chloroform and methanol mixture. A thin film of lipid is obtained using rotary evaporator above the lipid transition temperature. It is kept overnight under vacuum to remove traces of organic solvent. The deposited film is hydrated with 10 % v/v ethanol in phosphate buffer pH 6.5 by rotation at 60 rpm. Drug is added to the formulation. The vesicles are sonicated for desired size.

Particle Size and Zeta Potential: Particle size of transethosomes can be done by particle size analyzer, dynamic light scattering and photon correlation spectroscopy. Zeta potential of the formulation can be measured by zeta meter.

Entrapment Efficiency: The entrapment efficiency is expressed as the percentage entrapment of the drug added. This can be measured by ultra- centrifugation technique. % EE can be expressed as:  [Qt-Qs/Qt]* 100

Transition Temperature: The transition temperature of transethosomes can be determined by using differential scanning calorimetry (DSC).

Drug Content: Drug content of transethosomes can be determined using U.V spectrophotometer. This can also be quantified by a modified high performance liquid chromatographic method.

Vesicle Stability: The stability of vesicles can be determined by assessing the size and structure of vesicles over time.

Surface Tension: The surface tension activity of drug in aqueous solution can be measured by the ring method in a Du Nou ring tensiometer 15.

Penetration and Permeation: Depth of penetration from transethosomes can be visualized by confocal laser scanning microscopy (CLSM) 17.

Garg V et al., recently proved that transethosomal gel of piroxicam was found to be superior in all aspects as compared to other vesicular systems with improved stability and highest elasticity 22.

Issues and Future Progress Related to Ethanol Based Vesicles for Transdermal Drug Delivery: Most of the active molecules do not pass through stratum corneum barrier. Ethanol based nanocarriers have opened a new window to deliver various bioactive molecules transdermally as they have capability to fluidize and disturb the rigid lipid system of stratum corneum. These systems represent an efficient non-invasive drug delivery approach for medium and large sized bioactive molecules along with high patient compliance and low cost treatment. However, effective clinical exploration of the ethanol based nanocarrier system is still a challenge. It is necessary to evaluate them clinically to check their potency. Ethanol based nanocarriers need safety exploration in some specific clinical conditions like their application to open areas of eczema as ethanol show irritant effect to skin. So, further research in this field will promote effective drug release in-vivo and make transdermal therapy 24.

CONCLUSION: Skin permeation enhancehment technology is a rapidly growing field which will significantly increase the number of drugs for transdermal delivery. As a result skin may become major route of delivery in the coming decade 25. Transethosomes provide the highest flexibility to the formulator to change the ethosomal properties according to the required research criteria by changing the edge activators and/or penetration enhancers 26. Ultra deformable vesicles like transethosomes have the ability to deliver larger range of molecules like peptides, drugs with poor penetration, drugs for quicker and targeted action, hormones and antibiotics etc.

They offer safety, efficacy and patient compliance hence are more superior to other conventional transdermal permeation techniques. Transetho-somes have become promising carriers not only for topical treatment of local but also for systemic disorders. They can be explored in the future for delivery of various drugs through transdermal delivery. Formulation of these vesicles in gel form may improve their viscosity and hence increase their residence time on the site of action.