TRANSGENIC LYCOPERSICUM ESCULENTUM MILL (TOMATO)PLANT AS BIOREACTOR FOR THE PRODUCTION OF HUMAN NEUTROPHIL PEPTIDE-1 (HNP-1): A USEFUL PROTEIN BASED PHARMACEUTICAL

ABSTRACT: The term ‘transgenic plant’ is defined as the plants that are produced in the lab by artificial insertion of genes sometimes from the same species and sometimes entirely from the different kingdom. A major advantage of transgenic plant because of which it gains a lot of importance in today’s world is developing it for producing pharmaceutically useful compounds. Hence, they are acting as a natural bioreactor for producing therapeutic proteins and peptides in large amount. The present work deals with the investigation of producing a Human Neutrophil Peptide-1 (HNP-1) which is an antimicrobial peptide and commonly known as Defensin in Lycopersicum esculentum Mill. plant by Agrobacterium tumefaciens mediated genetic transformation technique. The cloning of HNP-1 was successfully done in a plant expression vector ‘pGreenI 0029 with 35S CaMV promoter’ by authors and described earlier. In this work we would like to describe transformation of pGreenI 0029 with HNP-1 gene and 35S CaMV promoter, inside Agrobacteium tumefaciens cells and then genetic transformation of Lycopersicum esculentum Mill.plant via recombinant Agrobacteium tumefaciens by seed cotyledon method. The transgenic tomato plants were screened for the presence of HNP-1 gene. The isolated total soluble proteins from tomato leaves were subjected for in vitro antimicrobial activity and showed antimicrobial activity against various pathogenic microorganisms like S. aureus, B. subtillis, E. coli and Candida albicans.

INTRODUCTION: The term ‘transgenic plant’ is defined as the plants that are produced in the lab by artificial insertion of genes sometimes from the same species and sometimes entirely from the different kingdom 1.

Hence they are acting as a natural bioreactor for producing therapeutic proteins and peptides in large amount. The aim of the present work was producing a Human Neutrophil Peptide-1 (HNP-1) which is an antimicrobial peptide commonly known as Defensins in Lycopersicum esculentum Mill. plant by Agrobacterium tumefaciens mediated genetic transformation technique. The Defensin was selected as a model drug to be expressed inside the transgenic Lycopersicum esculentum Mill. (Tomato)plant since they are small 3-4 kDa antimicrobial peptides found in the neutrophil cells of human blood and have shown to exert broad range of pharmacological activities 7-9.

They are active against various gram positive and negative bacteria, fungi and Mycobacterium tuberculosis 10, 11. They are also shown to be cancer biomarkers and in treatment of cancer since they initiate apotosis in cancerous cells 12, 13. They also increase immunity to the patient against various infections and therefore useful for patient with HIV infection 14. The plant Lycopersicum esculentum Mill. (Tomato)was selected on the basis of some of the characteristics like popular vegetable, fruit does not contains toxic substances, easily processed, easily propagated by means of seed or by tip or shoot cuttings 15. There is high plant biomass and it can be easily grown under containment.

MATERIALS AND METHODS: pGreen vector with 35S CaMV promoter was used for expression study, Lycopersicum esculentum Mill.(Tomato) plants were used as a host for expression. All other reagents like Tomato regeneration medium, MSO medium, SOB medium and other tissue culture media and apparatus were purchased from Hi Media.

All the experiments were conducted after the Institutional Bio Safety Committee (IBSC) approval.

100µl of the above mixture was then plated on SOB Agar media containing Kanamycin (50µg/ml) for selection.

Extraction of soluble proteins from transgenic tomato leaves 23: 5 grams of leaves were homogenized using 2% sucrose as cryoprotectant and lyophilized for overnight in lyophilizer. The dried powder was homogenized in extraction buffer (10mM  KCl, 9.6mM, NaH2PO4.2H2O, 15.2mM Na2HPO4, 150mM NaCl, pH 7, 10 ml) with a boiling for 10 minutes at 100ºC. The mixture was centrifuged at 13,000 rpm for 30 minutes and supernatant was precipitated with Ammonium Sulfate at 70% relative saturation. The precipitated protein fraction was collected by centrifugation at 4ºC at 13,000 rpm for 30 minutes. The pellet was dissolved in 2 ml of ddH2O and filter sterilized using 0.22 µm membrane filters.

In vitro antimicrobial activity of isolated protein from transgenic Tomato plants 24: The crude soluble protein, isolated from Tomato plants were tested against different microorganisms like E-coli, S. aureus & B. subtilis by cup plate method to check its biological activity. The cultures of different microorganisms were inoculated one day before the testing of antimicrobial activity. The nutrient agar media was poured into sterile petridish aseptically under Laminar Air Flow (LAF). When the media gets solidified, cultures were inoculated by Swab method and four cups were made with the help of sterilized Borer and Lifter. Different dilutions of isolated protein solution (20, 40, 80 and 100 mgL-1) was filled in four cups and kept in refrigerator for an hour for proper diffusion. The plates were then kept for incubation at 370C for 18 hours. Next day zone of inhibition was measured. 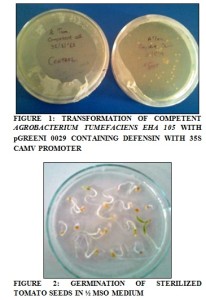 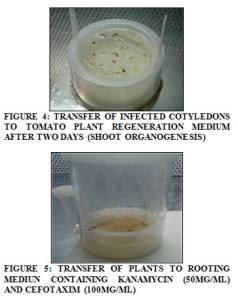 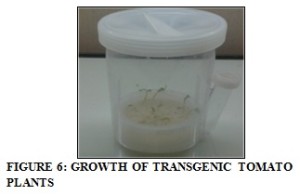 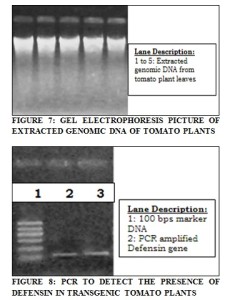 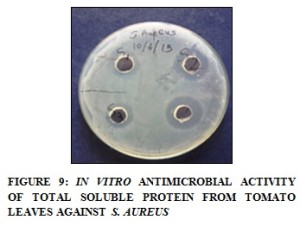 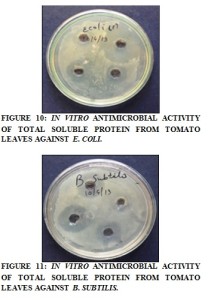 DISCUSSION AND CONCLUSION: Transgenic plants for production of therapeutic peptides are promising tool for large scale production of Human Neutrophil Peptide-1 (HNP-1). The given peptide can be produced in a transgenic Tomato plant and which in turn lead to resistance of Tomato plants against plant pathogens. The Tomato plants will become more resistible for microbial infections. Since HNP-1 (Defensin-1) has role in increasing the immunity of the humans therefore plants with HNP-1 (Defensin-1) expression will surely increase the immunity of the individuals who will take it. The purified Defensins from transgenic tomato plants can also be used as a potential target to be developed as a drug for antimicrobial therapy against various infections.

ACKNOWLEDGEMENTS: Authors are thankful to the principal and management of Parul Arogya Seva Mandal for allowing the research work. The authors are also thankful to Marc Smedley, John Innes Centre, Norwich Research Park, UK, for giving the pGreen vector for the project work.