ABSTRACT: The present study was conducted to perform the translation and validation of Multi-Dimensional Questionnaire (MDQ) instrument for use in Indian type 2 diabetic patients. Validated English version ofMDQ instrument was selected for the study. The instrument was subjected to forward and back translation to generate final version in the Hindi language. The instrument consists of three sections: Section I, general perceptions of diabetes and related social support measuring interference, severity and social support. Section II, social incentives related to self-care activities measuring positive reinforcing behaviors and misguided reinforcing behaviors and Section III, self-efficacy and outcome expectancies measuring self-efficacy and outcome expectancies. Validation was done in two hundred fifty Indian diabetic type 2 patients after the pilot testing (n=50).  Internal consistency was assessed using Cronbach’s alpha and value of 0.84 was gained for the summary score and alpha values of 0.81, 0.93 and 0.87 were observed for section I, II and III indicating high levels of internal reliability.  The results of the study reveal the validation of the MDQ instrument in Hindi language and its use for further quality of life utility studies

INTRODUCTION:Diabetes mellitus (DM) is a chronic illness that affects health related quality of life (QOL) of patients 1. It is the illness which requires regular patient self-management education and continuous and medical care. Type 2 DM had showed significant impact on physical and psychological wellbeing of patients. Self-perceived QOL related to diabetes is an important outcome for diabetes education programs2.

Psychological well-being appears to be an important goal of diabetes management and it should be taken into consideration in everyday diabetes care. Multiple factors such as glycemic control, types of treatment, numbers and types of complications and comorbid conditions, and demographic variables are studied to evaluate the association between health related quality of life (HRQOL) and these factors 3. Qualitative and quantitative changes in the patient’s relationships are seen in DM 4. Good glycemic control could delay the onset and progress of complications5, 7.  Social support 8,  11 problem-focused coping 12 and self-efficacy 8, 12-16 relate to good regimen adherence and glycemic control.

Taking into consideration the changes in relationship many instruments are designed to assess the QOL of patients where due importance is also given to assess physical, psychological and social functioning 17.

MATERIALS AND METHODS: The study was conducted in two hundred fifty outpatient clinics in Pune. Patient information leaflet was given to the individual patients and the written consent was obtained. The MDQ questionnaire was administered to diabetic patients twice during total study period.  For translation procedure, one of the authors acted as the local project manager who carries out the cognitive debriefing interviews. He was a native speaker of the Hindi language and a resident of India.  The study was designed as shown in fig. 1. 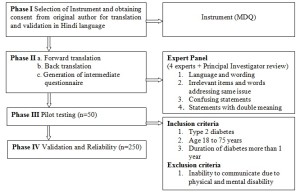 The suggested methodology was as follows:

Following two step were carried out to translate the original MDQ into Hindi language and produce a version that would be conceptually as close as possible to the original questionnaire.

Back translation: The intermediate MDQ was given to the two translators who had never seen the original MDQ before. Information was given regarding the questionnaire explaining that it was a health related quality of life assessment tool specific for diabetes type 2. They were requested to formulate the questions in simple English language understandable to everyone.Translator I was an official translator having vast experience in language translation and translator II was a dialectologist who also was a native Hindi speaker. Both of them had extremely good command over English as well as Hindi language.

Pilot testing: The final second intermediate MDQ was then administered to 50 patients with type 2 diabetes. These patients had never seen the MDQ questionnaire before and were all native Hindi speakers. Patient population comprised of males 42and females 8. All patients with history of diabetes were asked to fill MDQ questionnaire and were then interviewed for difficulty in understanding the questions and their meaning. They were also asked for the questions that confuse, divert and upset them during the filling of questionnaire.

Validation Study (Study population and sample size): Patients who participated in the validation study were Hindi speaking adults above the age of 18 years with a clinical diagnosis of diabetes mellitus type 2 at the time of the first study visit. A total of 250 diabetic patients (31 females and male 219) were scheduled to participate in the study.  A consent form and Hindi version of MDQ was given to patients and they were asked to fill the same. After the interval of 4 weeks the same study population was asked to fill the questionnaire. Patients were on the regular treatment between visits.

Statistical analysis:Internal consistency and reliability of dimensions of the questionnaire were assessed using Cronbach alpha coefficient. Alpha values equal to or greater than 0.70 were considered satisfactory. Test re-test i.e. reproducibility was assessed across a 4-week interval on 250 patients using interclass correlation coefficient.  Kruskal-Wallis H test results for multiple group comparison and Mann-Whitney test results for pairwise comparison was used.  Pearsons correlation coefficient was calculated for each of the three sections and seven subs-domains. All statistical analyses were performed with the SAS software package (version 9.1 for Windows). Significance was set to 0.05 for all analysis.

RESULTS: Demographic and clinical data of the respondents indicates that out of two hundred eighty six people with diabetes type 2 that participated in the study, two hundred fifty (87.41 %) participants completed and returned the questionnaires.  The study design is presented in Figure 1. Mean age was 58.0 (SD = 6.7) years (range=18-75). Other demographic characteristics of the patients are presented in Table 1.

Out of 250 patients 219 respondents were male and 31 were females. As per the demographic study 50.8 % of patients were without any diabetic complications while 49.2 % of patients were suffering from diabetes related complications. Out of 250 patients 16.8 % were found to be overweight and 3.2 % were obese.  Average age of diagnosis with diabetes was 6.98 years (SD=1.73).  The mean, standard deviations and reliability coefficients of the seven domains are presented in Table 2. Results indicate adequate internal consistency ranging from 0.71 to 0.91.Internal consistency was assessed using Cronbach’s alpha and value of 0.84 was gained for the summary score (Section I, Section II and Section III), indicating high levels of internal reliability. Alpha values for total ranged from 0.84 (maximum) to 0.82 (minimum). Alpha values for  all the three sections, general perceptions of diabetes and related social support was 0.81, social incentives related to self-care activities was 0.93 and for self-efficacy and outcome expectancies it was 0.87 as shown in Table 3. Pearson correlation was assessed for all the three sections and the correlation was found to be significant for all (p< 0.05) as presented in Table 4.A higher correlation between all the three sections was observed. Table 5 presents the correlations among the seven domains of MDQ. Statistically significant correlation (p<0.01) was observed between interference and positive reinforcing behavior, misguided reinforcing behavior, self-efficacy and outcome expectancies. Also significant correlation was found between severity and outcome expectancies. Misguided reinforcing behavior showed weak positive correlation with self-efficacy. Positive reinforcing behavior showed strong positive correlation with misguided reinforcing behavior and weak association with self-efficacy.

DISCUSSION: MDQ was developed to facilitate data integration and was not designed to provide a comprehensive assessment. It is comprised of self-report measures that can be used along with other assessment procedures including medical, behavioral, or any other relevant psychosocial measures.MDQ is comprised of three sections focusing on general perceptions of diabetes and related social support, social incentives, self-efficacy, and outcome expectancies in relation to self-care activities. The present study assessed the validity and relaibility of the Hindi version of MDQ in 250 patients with type 2 diabetes. This validation was performed in four phases I to IV. MDQ questionnaire was subjected to pilot study (n=50) after forward and backward translation.

CONCLUSIONS: In conclusion, the results of this study indicate that the Indianversion of the MDQ was reliable. Thus the translated instrument helps to study the psychological performance of diabetic patients towards diabetes. The present study demonstrated that the Hindi MDQ is useful for assessing quality of life of type 2 diabetes patient’s in clinical settings. The study carried out indicates that this validated Hindi version of MDQ in Indian type 2 diabetec patients can be further incorporated for utility study.

ACKNOWLEDGEMENT: Authors are thankful to Dr. Arie Nouwen University of Birmingham, Edgbaston, Birmingham, B15 2TT, UK for giving permission to use the instrument.

5.       The Diabetes Control and Complications Trial Research Group (DCCT). The effect of intensive treatment of diabetes on the development and progression of long-term complications in insulin-dependent diabetes mellitus. N. Engl. J. Med.Sep 30 1993; 329(14): 977-986.