ABSTRACT: Carissa spinarum L.  is  a  small  spinous  evergreen  shrub  growing throughout  India  in  dry  regions.The plant used locally in Indian and Chinese system of medicines to cure various diseases. Carissa spinarum has also been used in the Ayurvedic medical system because of its therapeutic effects against liver disease, epileptic disease, microbial disease, cytotoxic, viral diseases.The isolated metabolites and crude extract have exhibited a wide of in vitro and in vivo pharmacological effect, including antioxidant, antimicrobial, antiviral, anticonvulsant, anticancer, antiarthritic, antihelmintic, cytotoxic activity. A chemical study of this plant was then initiated, and this led to the isolation of 12 compounds, including a coumarin, two cardiac glycosides and nine lignans. These isolated compounds were evaluated for several biological activities, including antiherpetic, cytotoxic, antioxidant and antibacterial effects.A shrub, Carissa spinarum have emerged as a good source of the traditional medicines for the treatment of inflammation, arthritis, microbial infection, epilepsy, viral infection, cancer disease. Pharmacological results have validated the use of this species in the traditional medicines. Some bioassays are difficult reproduce because the plant materials used have not been well identified; therefore analytical protocol and standardization of extracts should be established prior to biological evaluation. Root, stem and leaf of this shrub should receive more attention. Expansion of research materials would provide more opportunities for the discovery of new bioactive principles from the Carissa spinarum.

INTRODUCTION: Plants and their secondary metabolic constituents have a long history of use in modern medicine and in certain systems of traditional medicine, and are the sources of important drugs such as atropine, codeine, digoxin, morphine, quinine and vincristine 1.

India is sitting on a gold mine of well-recorded and well-practiced knowledge of traditional herbal medicine. But, unlike China, India has not been able to capitalize on this herbal wealth by promoting its use in the developed world despite their renewed interest in herbal medicines 2.

Distribution: Thorny bushes of C. spinarum L. are found commonly growing in the forests and wastelands up to elevations of 1,500 meters. They are highly drought-resistant. They bear small fruits which are eaten by all and are also offered for sale at many places.

This shrub is found wild in most parts of India, especially in the dry foothills of the Punjab, the sub-Himalayan tract up to 4,000 feet in the trans-Indus territory and also on the coast of the southern Andaman (Fig. 1) Carissa spinarum L. 8. 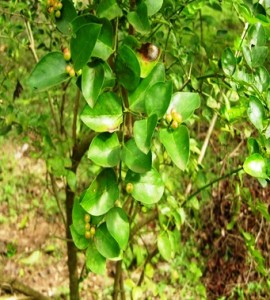 Morphology: An erect thorny shrub, with forked branches, 2-3 meters in height; wood, very hard; bark, light brown to green, can be stripped off longitudinally by hand, exposing the white to light-green wood underneath; thorns, 3.2 cm long, brown to greenish at the base and deep brown towards the tip.

Flowers, short-stalked, sweetly scented, bisexual, complete, bracteates, cyclic, actinomorphic, their color varying between white and camellia rose 622; inflorescence, terminal or a corymbs cymes, with about 10 flowers; calyx, polysepalous, with 5 sepals, green, companulate, 2 to 3 mm, long; corolla, tubular at the base, dilated at the top, five-lobed, glabrous, white, the dilation of corolla 8 to 9 mm; androecium, with 5 stamens, each 2 to 3 mm long, inserted near the neck of the tubular portion of the corolla; gynoecium, one, superior, 7 to 8 mm long, with a spindle-shaped stigma. Fruit, an ovoid berry, 9 mm in length, 6 mm in diameter, 642 mg in weight, 586 microlitres in volume; fruit color, hyacinth blue 40; pulp, scarlet 19/2; juice, shrimp red 616/3.

The flowering and fruiting season: Generally, the flowering takes place during April and May. In some cases, it might start even by the end of July. The peak flowering season, however, was observed to occur by the middle of May. The small fruits take a lot of time to develop and mature. They start ripening from November and continue to do so till the end of January. Mature fruits were also observed on some bushes as late as April. These fruits were, probably, the outcome of the July blossoming 8.

Yield: The average yield of medium-sized bush is C. spinarum L. was found to be 272 grams.

Medicinal properties: The roots of C. spinarum L. are reported to be many medicinal uses. They are ground and put into the wounds of cattle to kill worms. It is also used in combination with the roots of some other medicinal plants to treat rheumatism by the mundas (a tribe) of Chhota Nagpur. It is a strong purgative and is used as one of the ingredients in some purgative preparations. A large dose of the roots of C. spinarum L.  may even prove fatal owing to profuse purging. The roots also act as a repellent in the case of snakes, when the roughly ground powder of the roots mixed with water is poured into the holes of snakes 8.

The medicinal uses, commercial uses, edible uses and other uses of C. Spinarum whole plant are given in Table 1. 10.

Dessert quality: The fruits are eaten along with the seeds. They are sweet in taste and of fairly good quality.

Utilization: As stated earlier, the small fruits of C. spinarum L. are commonly eaten and are also offered for sale at certain places. As it is evident from the chemical composition of the fruit, it is highly nutritious and is a very good source of protein. The content of total soluble solids is very high and indicates the possibility of this wild fruit being dehydrated and processed. Research should be taken up in this direction.

The bushes of this wild plant are thorny and are very effective as a fence and are mainly used in the villages for this purpose. These bushes are very hardy and drought-resistant and can grow even on very poor and rocky soils. Therefore they can be used for afforestation in soil conservation. The leaves are fairly rich in tannins (9-15 per cent) and constitute a promising tanning material, particularly in combination with other tanning stuffs, such as the twigs and bark of Emblica officinalis Gaertn 8.

Fruit type is highly diversified in the family, and it is diagnostic of many genera. Genera 1-4 produce 1, 2-celled berries from a flower; genus 5 produces 2, 1-celled berries from a flower; 6 and 7 produce mostly fleshy follicles containing deeply indented seeds with ruminate endosperm; 8 has follicles and winged seeds; 9 produces follicles and seeds with 2 comas; 10-12 have follicles with globose seeds; 13-18 have drupes mostly with fleshy mesocarp; 19 has samaroid fruit; 20 has spiny capsules with seeds winged all around; and 21-44 have free or fused follicles and comose seeds. Double flowers are known only from cultivated forms of Nerium oleander, Tabernaemontana divaricata, and Wrightia religiosa.

Plants of the Apocynaceae are often poisonous and are rich in alkaloids or glycosides, especially in the seeds and latex. Some species are valuable sources of medicine, insecticides, fibers, and rubber. About 155 genera and 2000 species distributed primarily in the tropics and subtropics, poorly represented in the temperate regions. Of the 44 genera and 145 species present in China, one genus and 38 species are endemic, and nearly 95% of the taxa grow in the southern in the southern and southwestern portions of the country 11.

Species spinarum: A bushy shrub or tree with rigid spreading branches armed with straight thorns. This evergreen plant found throughout the hotter parts of India and sub-Himalayan region. It is also observed in Andaman Islands.

Light grey fibrous barks, white or pink fragrant flowers in clusters. Berries dark purple or black. It can be cultivated in gardens, mostly as hedges for its fragrant flowers and edible berries. Berries make good tarts, syrups, jellies or a cooked preserve. Flowers are used for personal adornment.

Leaves are used in tanning industry and as fodder for sheep and goats. It is also suitable for rock gardens and fencing 10.

Toxicity: There was no mortality amongst the graded dose groups of animals and they did not show any toxicity of behavioral changes at a dose level of 2000mg/kg. This finding suggests that the ERCS is safe in or non-toxic to rats and hence doses of 100, 200 and 400 mg/kg, p.o were selected for study 13, 14, 16.

The evaluation of acute toxicity for the Carissa edulis extract at the therapeutic oral dose of 250 mg/kg in uninfected male and female Balb/C mice. The results indicate that there was no significant difference in the mean weights of mice given an oral dose of extract at 250mg/kg and the control that were given no drug in both sexes of mice 27.

The median lethal dose (LD50) of the Carissa edulis extract in mice was found to be 282.8 mg/kg body weight administered intraperitoneally. At 1000 mg/kg dose there was 100% mortality and the minimum dose that killed a rodent was 100 mg/kg. The oral LD50 value for Carissa edulis was above 5000 mg/kg 15.

CONCLUSION: The present review discusses the pharmacological aspect of the shrub C. spinarum and especially provides a detail analysis of the literature published since the year 1771. Glycosides, flavonoids, saponins, triterpenoids, steroids, tannins and other phenolic compounds are commonly occurred in this species. Pharmacological studies carried out on crude extracts and pure metabolites provided pragmatic documents for its traditional uses, and have revealed this shrub to be a valuable source for medicinally important molecules.

Throughout our literature review, we observed that C. spinarum were inclined to dissimilar pharmacological functions. The C. spinarum possesses potent antimicrobial and nutritional evaluation. The C. spinarum is good treatment of Hepatoprotective, helmintic and cytotoxic diseases. The toxicity of C. spinarum shows no mortality amongst the dosed group of animals and they did not show any toxicity or behavioral changes at a dose level of 2000mg/kg. This finding probably suggests that the C. spinarum is relatively safe in or non-toxic.

Expansion of research materials would provide more chances for discovery of new bioactive principle from the C. spinarum.

ACKNOWLEDGEMENT: The authors are thankful to the authorities of Bundelkhand University, Jhansi, for providing support to the study and other necessary facilities like internet surfing, library and other technical support to write this review article.