INTRODUCTION: DPP-4 inhibitors are a newer class of anti-diabetic agents with efficacy comparable to in-use treatment regimen. Glucoregulatory effects of incretins (Glucagon-like peptide-1 [GLP-1] and glucose-dependent insulinotropic polypeptide [GIP]) are the basis for these new drugs.1-4 Drugsthat inhibit enzyme dipeptidyl peptidase-4 (DPP-4), increase the active levels of GLP-1 and GIP, and in doing so they improve the islet function and glycemic control in T2DM 5-11 Other beneficial effects are  low risk of hypoglycemia and weight neutrality.12-16

Gliptins have recently became a matter of controversy  as  their usage has lead to some reports of exocrine pancreatic insufficiency resulting in rise in serum amylase and serum lipase levels in patients. Some prospective studies done in this regard have also reported similar findings. Occurrence of acute pancreatitis in DPP 4 treated patients have been infrequent and rarely reported. However, as gliptins are widely accepted and prescribed in T2DM, this phenomenon is of great concern to both diabetologist and patients together. This prospective study is thus planned in the same reference to look into the occurrence of rise in serum amylase and lipase values following gliptin therapy and whether there could be some serious consequences related to this occurrence

MATERIALS AND METHODS: This prospective study was conducted in patients treated in diabetes clinic on OPD basis in Department of Medicine, King George’s Medical University, Lucknow, during year 2014-2015. Cases included in the study (n=90) were patients of type 2 diabetes mellitus (age >=30yr) treated with gliptins ± other oral hypoglycemic drugs. The controls (n=84) included subjects with matched characteristics and treated with other oral hypoglycaemic agents except gliptins. Serum amylase, serum lipase, fasting blood sugars, post prandial blood sugars and glycosylated haemoglobin (HbA1c) were moniterd at 3 monthly and 6 monthly intervals. Serum enzyme levels >3 times of the upper limit of normal were taken as the cut off value.

Patients were explained warning signs like abdominal discomfort, pain abdomen, nausea and vomiting and were asked to visit in OPD if such symptoms appeared. Three subgroups were created in the case group namely subgroup A(n=33), B(n=30) and C(n=27) being on sitagliptin, vildagliptin and linagliptin respectively, in equivalent doses. Intersubgroup variation with respect to the enzyme levels was also observed at 3 monthly intervals. We excluded patients with history of prior pancreatitis, patients on treatment with antimetabolites, chronic alcoholics, those with hypertriglyceridemia (>1000 mg/dl), cholelithiasis and post ERCP patients. Serum amylase and serum lipase levels were analysed by Vitros 250 micro slide using dry chemistry analyzer colourimethod. All the other biochemical parameters observed in the study were analysed by Biochemistry Roche (COBAS C 311, Germany).

The data hereunder has been analyzed under two simulations:

In both the groups majority of patients were males. Though the proportion of males was higher in Controls (66.7%) as compared to Cases (57.8%) yet this difference was not significant statistically (p=0.219). (Table 2)

TABLE 2:  COMPARISON OF S. AMYLASE LEVELS AT DIFFERENT FOLLOW UP INTERVALS IN CASES AND CONTROLS

TABLE 3: COMPARISON OF S. LIPASE LEVELS AT DIFFERENT FOLLOW UP INTERVALS IN CASES AND CONTROLS 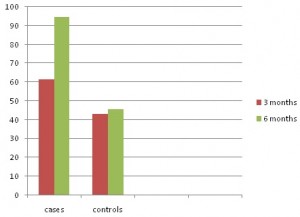 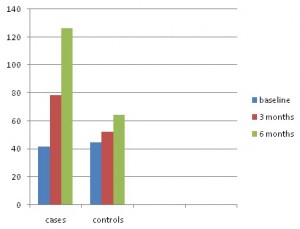 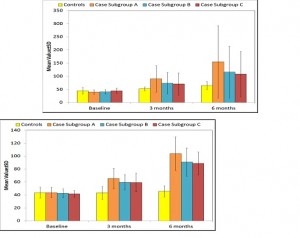 For serum lipase, statistically no significant differences between group were observed for any of the comparisons at baseline. However, at 3 and 6 months, the subgroups had significantly higher mean values as compared to the control group. There was no inter subgroup variation in relation to serum lipase values.

DISCUSSION: Recent reports of pancreatic exocrine insufficiency resulting from DPP-4inhibitor therapy has drawn worldwide attention. These drugs were widely accepted and prescribed presently and such reports are of utmost concern related to safety profile of these agents. Though this occurrence is not an uniform observation as some studies could not find the rise in pancreatic enzymes in study subjects on gliptin theray. In response to this controversial front ,we too wanted to observe this phenomenon on our patients of type 2 diabetes mellitus formulating this work as a prospectively study.

We included 174 diabetic patients in our study, 90 were kept on DPP4 inhibitors with or without any other oral hypoglycaemic drug and 84 were kept on oral hypoglycaemic drugs other than gliptins. Three subgroups were created i.e. A, B and C on the basis of the different gliptins prescribed i.e. Sitagliptin, Vidagliptin and Linagliptin respectively. The variation in level of exocrine pancreatic enzymes (serum amylase, serum lipase) after administration of these drugs was observed ay baseline, 3 months and 6 months.

As an effect for further evaluation, the case group was divided into subgroups A, B and C on the basis of the different gliptins prescribed i.e. Sitagliptin, Vidagliptin and Linagliptin respectively. Equivalent doses of all three gliptins were given to the subjects. The subgroups had significantly higher mean amylase value as compared to the control group at all time intervals. No significant difference was observed in mean S. amylase values among the different subgroups of cases at 3 monthly interval {subgroup A (sitagliptin) - 65.4±15.9; subgroup B (vidagliptin)-59.5±11.9; subgroup C (linagliptin)-59.3±14.6)}. At 6 months, the mean value of subgroup A (104.1±26.1) was significantly higher as compared to subgroups B (90.9±21.9) and C (88.8±17.8). No significant difference was observed between subgroups B and C.

Several studies have been done in past in this regard. Both prospective and retrospective studies were carried out, to evaluate the action of DPP4 inhibitors on pancreas. Lando et al 17 in their prospective work (n=123) studied that DPP-4 inhibitors are associated with increased levels of serum lipase or serum amylase in many patients with type 2 diabetes, possibly suggesting the presence of pancreatic inflammation. Among all 90 patients who received a GLP-1 receptor agonist or a DPP-4 inhibitor, 32 (36%) had an increase in serum amylase or lipase (or both) in comparison with 6 of 33 patients (18%) in the control group.

M Jayaraman et al (2013) 18 conducted an observational study with patients of type 2 DM receiving one of the gliptins (Sitagliptin, vildagliptin, or saxagliptin) for at least 1 month.Serum amylase test was done immediately at clinical presentation along with USG abdomen was performed. Asymptomatic elevation of serum amylase >3× upper limit of normal was noted in five patients (2.4 per 100 patient years), without any sonological evidence of pancreatitis and one patient (0.48 per 100 patient years) presented with mild acute pancreatitis which resolved in 8 days. The work thus supported the occurrence of gliptin induced pancreatic inflammation.

Another prospective study done by H.Tokuyama et al (2013) 19 studied the effect of DPP-4i in twenty four Japanese patients patients with type 2 diabetes taking DPP-4i with or without any additional oral hypoglycaemic drug.  With 12 matched patients taking metformin. Pancreatic amylase and lipase activity was evaluated at 0 week, 8 weeks and 24 weeks after start of treatment. These enzymes were slightly but significantly increased, suggesting DPP-4i cause a low-grade inflammatory change in the exocrine pancreas.

Certain retrospective or cross sectional studies have also contributed in this matter of interest and concluded variably. Ellshoff et al (2011) 20 described the effect of sitagliptin and exenatide over exocrine pancreas. They examined the US Food and Drug Administration’s database of reported adverse events for those subjects who were associated with the dipeptidyl peptidase–4 inhibitor sitagliptin and the glucagon-like peptide-1 mimetic exenatide, from 2004–2009. Observations concluded that the use of these drugs increased the odds ratio for pancreatitis 6 fold as compared to other therapies. (P < 2 × 10−16).

CONCLUSION: The work observed pancreatic inflammation occurring after gliptins use in type 2 diabetes mellitus patients. The phenomenon was seen happening with different DPP4 inhibitors individually. None of the patients developed acute pancreatitis. More information is needed to establish cut off level of dose and duration of gliptins intake and the ways of evaluating pancreatic inflammation to substantiate the safety of these agents against their side effects.