ABSTRACT: The objectives were to observe the drug pattern of epileptic patients with their seizure type, to analyze the type of therapy received by the patients, to observe if epileptic patients are receiving an appropriate dose, to identify the side effects in epileptic patients associated with drug treatment and to observe the cost of conventional and newer antiepileptic drugs (AED’s). This was a cross-sectional observational study conducted in the Neurology department. A total of 150 patients were selected based on the inclusion and exclusion criteria. Demographic details and clinically relevant details such as therapy, dose of the drug, side effects experienced pertaining to the objectives of the study were collected using the self-prepared proforma. Symptomatic localization (64%) was the most commonly observed epilepsy syndrome. The commonly observed type of therapy among the patients was dual therapy. AED dose prescribed for most of the adult population was at a sub-optimal level, as explained by the daily defined dose/ prescribed daily dose (DDD/PDD) ratio (<1). Carbamazepine and oxcarbazepine were prescribed at a suboptimal level in the paediatric population. Excessive somnolence, fatigue, weight gain were the most commonly reported side effects. The observed mean cost of newer drugs was more than conventional drugs. Despite the appropriate selection of AED, patients had increased frequency of seizures with the incidence of side effects. This problem could have been overcome by prescribing optimal doses and avoiding the use of polytherapy wherever possible.

INTRODUCTION: Epilepsy is one of the most common neurological conditions representing a heterogeneous collection of disorders that have in common recurrence of seizures.

A seizure is a single (finite) event of abnormal discharge in the brain, and epilepsy is a chronic disorder with abnormal recurrent seizures, and the epileptic syndrome is an epileptic disorder characterized by a cluster of signs and symptoms customarily occurring together 1.

In worldwide, 60-90% of people with epilepsy receive no treatment or is inadequately treated 2. The majority of people with epilepsy have a good prognosis if they receive appropriate treatment 3. There is still a lack of documentation of safety aspects regarding many of newer AEDs drugs, as the use in special patient populations like children, women of childbearing age, and elderly 4.

AEDs are drugs with considerable inter-individual variability and are susceptible to cause adverse effects and drug interactions. Changes in prescription patterns, exposure of specific drugs to certain patient groups, a combination of drugs, generic substitution, potential for drug abuse and the use of AEDs in other disorders than epilepsy are examples of issues to be investigated in detail 5.

The general approach for epilepsy management involves identification of goals and develop­ment of care plan 6. The overall goal of anti­epileptic therapy is to prevent seizures and avoid untoward side effects with the regimen that is convenient and easy to follow. The choice of most appropriate AED depends on the classification of seizures and age of patient 7. The initiation of therapy for newly diagnosed patients is with a single antiepileptic drug. Monotherapy is normally the first line of treatment, as it has less drug interactions and side effects, lower cost, better tolerability, medication adherence, and quality of life 8.

Despite advances in the treatment of epilepsy, 30-40% of patients remain uncontrolled on a single AED. Combination therapy is recommended when two successive AEDs given as monotherapy have failed. Agents with a low risk of pharmacokinetic interactions are preferred for combination therapy, and the success of combination therapy can be improved by paying attention to mechanisms of action and using lower dosages. With correct, early, and uninterrupted therapy, up to 75% of patients with epilepsy eventually become seizure-free, many of them within 5 years after diagnosis. About 25% of patients may not respond to any kind of therapy. AEDs are highly successful in suppressing seizures in most patients 9.

In recent years, new AEDs that combine high efficacy with a low incidence of adverse effects have been developed (gabapentin, lamotrigine, levetiracetam, oxcarbazepine, tiagabine, topiramate, zonisamide). These newer AEDs are used as an adjunct to conventional AEDs in children with intrac­table epilepsy. Newer drugs are more effica­cious and have better safety as compared to conventional AED. However, caution must be exer­cised for possible drug interactions with conventional AEDs before using them as an adjunct. Moreover, many of these newer AEDs have been recently launched in the Indian market, and costs of some of them are largely prohibitive 10.

MATERIALS AND METHODS: A cross-sectional observational study was conducted over a  period of six months in the  Neurology Department of PSG Hospitals, Peelamedu, Coimbatore. The study was approved by the Institution Human Ethics Committee (IHEC, PSG IMS & R) of the hospital. The protocol was approved on 22/2/2018, Proposal number: 18/018.

Patients in the neurology department with epilepsy were selected for the study. Both genders and all age groups were included. Pseudo-seizure patients, patients having a seizure history of less than 1 month, patients having pathological liver & renal disorders, and patients who are not willing to participate were excluded from the study. Patient data collection form included demographic details, clinical details such as Treatment referral, Engel seizure score, Epilepsy diagnostic code, Drug and dose, Cost of AED’s per month, AED related side effects, No. of AED’s.

The trends observed in the prescription patterns were analyzed based on the seizure type and drug pattern, type of therapy, dose of the prescribed drugs, AED related side effects, and cost of the drugs with the help of self-prepared proforma and Engel seizure score. The statistical analysis was done using mean and standard deviation calculation, percentage calculation, bivariate correlation, curve estimation.

FIG. 1: PERCENTAGE DISTRIBUTION OF PATIENTS ACCORDING TO COMMONLY OBSERVED ANTI-EPILEPTIC DRUGS IN THE PRESCRIPTIONS 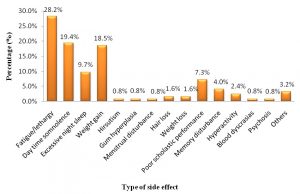 FIG. 2: PERCENTAGE DISTRIBUTION OF PATIENTS ACCORDING TO COMMONLY OBSERVED SIDE EFFECTS IN PATIENTS RECEIVING ANTI-EPILEPTIC DRUGS

TABLE 2: PERCENTAGE DISTRIBUTION OF PATIENTS ACCORDING TO PRESCRIBING TREND OF ANTI-EPILEPTIC DRUGS

TABLE 3: COMPARISON OF THE COST OF CONVEN-TIONAL, NEWER AEDS AND COMBINATION OF AEDS 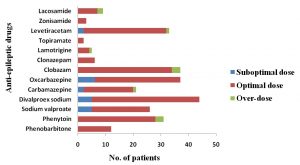 FIG. 3: BAR GRAPH SHOWING THE DISTRIBUTION OF PATIENTS ACCORDING TO OBSERVED PATTERN OF DOSE AMONG THE PATIENTS RECEIVING ANTI-EPILEPTIC DRUGS

The bivariate correlation method was applied, and there was a significant association between the type of AED therapy and side effects. The p-value of significance between intervention and drug-related problems was found to be 0.01 at a 100% level of significance. The interpretation was as the number of antiepileptic drugs increase, the side effects also increase.

DISCUSSION: Epilepsy is a common chronic neurological disorder that requires long-term management and imposes a large burden on the health-care system. Patterns of drug prescription are often inappropriate, and the need for registration of these patterns is essential in an effort to improve prescribing standards. Moreover, unemployment, lower marriage rates, social isolation, and the feeling of stigmatization may follow an adult or midlife chronic epileptic condition, even if the quality of life is thought to be less severely affected in people with good seizure control.

In this study, the area wise distribution of the patients in semirural (Municipality + Panchayat = 72%) was more compared to the urban population (28%). This result was similar to the study carried out by Venkateswara Murthy N et al., 12, which showed the semirural population was more.

A noticeable increase in the use of levetiracetam (18.6%) was seen during our study, which was found to be consistent with the trend and was in accordance with the results reported by J.E. Machado-Alba et al. 11

CONCLUSION: Our study gives an insight into the changes observed in the trend of prescribing patterns of anti-epileptic drugs. Nowadays, multiple AED’s are available, and the best antiepileptic therapy is tailoring the drug to the pocket of the patient to ensure optimal seizure control and absence of unacceptable side effects.

Despite the appropriate selection of AED, patients had increased frequency of seizures with the incidence of side effects. This problem could have been overcome by prescribing optimal doses and avoiding the use of polytherapy wherever possible. A shift from the use to conventional drugs to the newer AED’s was seen, which dominated the pharmacotherapy of epileptic seizures. Levetiracetam topped the list of prescriptions followed by clobazam and oxcarbazepine.

As more than 50% of drugs were newer, increased availability of newer drugs in hospital formulary would definitely attenuate the economic burden of epilepsy management. The mean cost of conventional drugs is lesser as compared to the newer AED’s.

These findings may be used by doctors and healthcare providers in order to make clinical decisions to achieve an optimal therapeutic outcome in patients prescribed with antiepileptic drugs. This helps to mitigate side effects by utilizing monotherapy and the elimination of polytherapy wherever feasible.

ACKNOWLEDGEMENT: Authors are thankful to the Neurology Department, PSG hospitals to fulfill the research work by providing invaluable support.