TRENDS OF GREEN CATALYSIS IN SYNTHETIC CHEMISTRY: AN OVERVIEW

TRENDS OF GREEN CATALYSIS IN SYNTHETIC CHEMISTRY: AN OVERVIEW

ABSTRACT: This paper is to review the green catalytic synthesis of organic reactions and discussed its advantages over the conventional method of synthesis. Recent advanced technologies have key trend to reduce the negative impacts of chemical environment and helps to obtain sustainability in chemical production. This review tries to bring many catalytic techniques that are safer in nature and more economical. We have considered those synthetic schemes which have significant role in pharmaceuticals industry and the different green catalyst employed in those reactions. These organic reactions have special advantages with the use of catalyst; there is better utilization of starting materials and minimum waste product formation. The main objective of these synthetic schemes is that there is least pollution to the environment.

INTRODUCTION:In recent years, the most important goal of synthetic chemists is the development of resource-efficient and sustainable chemical methodologies. Several attempts have been undertaken in green chemistry to design synthetic methods in such a way that the starting materials are consumed to the maximum extent and waste products are minimum 1-20. They have no adverse environmental impact during chemical synthesis. Designing and developing catalysts is identified as heart of greening of chemistry. The Catalysis contributes an alternative pathway of chemical transformation which enables the commercially viable creation of desired materials. In this article we have discussed some green catalyst and techniques which plays a major role in establishing the economic strength and clean technology revolution in the industry which provides new opportunities for synthetic methodologies 20-46. They are categorized according to structure, composition, area of application or state of aggregations. Following are the different green catalysts:

Benign Catalyst K10 Montmorillonite Clay:In recent decades variety of organic reactions extensively reported using either K10 clay or its modified catalyst. For example, in Fries rearrangement of phenylacetate as shown in Scheme 1, K10 clay has been used with the framework aluminum acting along as Lewis acid catalyst 47. The percentage conversions with K-10 clay and Na+ exchanged K-10 resulted higher yield of p-isomer (~80%) and when the amount of the catalyst was increased two-fold, this leads to increase in the amount of o-isomer. The protocol for the synthesis of various benzimidazoles and quinoxalines from carbonyl compounds and o-phenylenediamine was simplified with Zn-chloride-exchanged K10 montmorillonite (calyzic) catalyst.

This synthesis requires milder conditions, as shown in Scheme 2, atom-economic in nature, and no wastes 48-51. 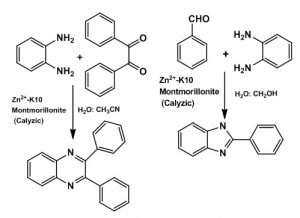 When K10 clay and cation exchanged montmorillonite clay was employed with hydrophobic CTAC-pillared clay leads to higher catalytic activity as well as higher selectivity. The addition reaction of butanethiol to styrene is mediated in the clay microenvironment, the formation of 1,2-dibutyldisulfide and butyl (4(2-(butylthio)ethyl)phenyl)sulfane totally suppressed and butyl(phenethiol) sulfane (as shown in Scheme 3) 52.

The nitration of oestrone Scheme 4 which is industrially significant, is catalyzed by clay, facilitated with metal nitrates such as ferric nitrate and copper nitrate and is known as ‘Clayfen’53.

SCHEME 4: NITRATION OF PHENOL WITH ‘CLAYFEN’

Polymer Supported Catalyst: The Suzuki-Miyaura coupling reaction which tends to the direct formation of C-C bond. This direct bond formation between carbon atoms has practical significance in industries, as they are fundamental route in the synthesis of pharmaceuticals, polymers, fine chemicals as well as for the synthesis of materials. The traditional method of Suzuki-Miyaura cross-coupling reaction mediated with transition metals occurs in mild condition but the used catalyst was difficult to remove from desired product. This ever-increasing interest leads the synthetic chemist to design greener approach for the preparation. As in traditional method aryl halides are reacted with aryl boronic acids in the presence of palladium catalyst and a base to form biaryl system. Under green chemistry, polymer-supported palladium catalyst has been found to be quite effective, and at the same time it can be easily removed through filtration and reused 54-57. 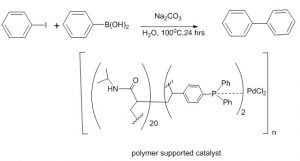 Solid Acid Catalysts: Solid acid catalysts are the most important heterogeneous catalyst that is found to be both economical as well as eco-friendly. The use of mineral acids in organic reactions like HCl, HF, etc. they have many difficulties like risk in handling, contamination, and disposal. There is eminent need to replace them and to carry out large number of acid-catalyzed industrialized processes. In the context of above adversity and need for an efficient methodology for acid-catalyzed synthesis, synthetic chemists developed a strong solid acid catalyst 58. These solid acid catalysts are stable, regenerable and active at moderate temperatures. A few of them had been discussed in below paragraph.

Nitration of aromatic compounds by traditional methodology over decades remains to be uneconomical. As they were nonselective in nature and led to the formation of unwanted isomers that are hazardous in nature. Over time, many unique methodologies have developed which has been proven to be highly p-selective, can reuse the nitric acid and zero-emission of effluents. In earlier investigation clay was modified with different metals, among which Fe2+ montmorillonite catalyst was found to be more active in nature. Another approach was use of various zeolites derived from SiO2 and Al2O3. They have defined pores and tend to be more selective towards the nitration of substituted aromatic compounds 59. Zirconia based solid acids have superior activity for hydrocarbon conversion. The reaction between indole with various aldehyde in the presence of sulfated zirconia catalyst resulting the synthesis of bis-indolyl methanes 60.

Microwave-Assisted Reactions: The conventional methods of organic synthesis are generally slow and inefficient as it involves heating by external sources. And resulting product yield is very low and incorporated with any unreacted reagents as impurity. The energy transfer in conventional method of heating depends on thermal conductivity of materials. Nowadays several synthetic approaches adopted microwave irradiation for heating, which is an inefficient way of direct heat transmission with polar molecules. These irradiations are non-ionizing and have many advantages over the conventional method of organic synthesis. The short reaction time and increase of product yield in microwave-assisted reactions lead to the application of these techniques in pharmaceuticals industry. Microwave synthesis comes under green chemistry due to these features 61. Following are some of the microwave-assisted synthetic methodology, 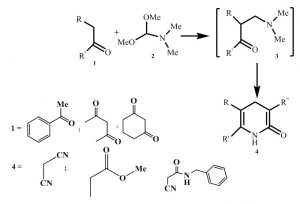 Dave et al. reported on microwave-assisted synthesis of 4, 6-diaryl-3-cyano-2-pyridones 63. The reported yields ranged from 74 to 81% with high purity of compounds after only 1–2 min of irradiation, as shown in Scheme 8.

Similarly, microwave irradiation is used for the synthesis of 2-quinolones from o-aminoarylketones and acetoacetic ester (4–6 min at 160 °C in the presence of a catalyst (CeCl3⋅7H2O) - yields 85–95%) Scheme 9. 64 This methodology is 5 or more times faster than conventional synthesis.

Ultrasound-Assisted Reactions: Ultrasound techniques are another tool used in organic synthesis. Comparing it with traditional method it requires milder conditions and has short reaction time 65. In this technique, ultrasound is transmitted through medium, molecules will possess an induced vibrational motion, and at certain points of vibration intermolecular forces will not able to hold the molecular structure intact. This will lead to the breakdown of molecules and resulting physical and chemical effects.

Thus it has great application in organic chemistry, materials, and biodiesel synthesis 66. Pacheco et al., 67 reported the synthesis of esters, by mixing fatty acids and p-TSA in ethanol or methanol and sonicate it for 20 min Scheme 10. This milder condition is enough to convert fatty acids into short-chain esters, and the yield of products was satisfactory as compared to the conventional method.

UV-Irradiation Mediated Reactions: Reactions under Ultra-Violet is an important synthetic process. Such a step may also take place under solvent-free conditions without any by-product formation and considered as a green chemistry approach. Preparation of tetrahydropyrimidines under UV radiation has been reported by Khunt et al. 69

Solid-State Reaction through Crushing: Grinding solids together, may reduce the melting point of the mixture changing it to liquid and the reaction may take place without any solvent. This concept has been used in multi-component Biginelli reaction for the synthesis of tetrahydropyrimidinones Scheme 13. 70-72