INTRODUCTION: Arthritis is an incurable condition that cannot be cured, especially in chronic cases, by general medication practices but treatments to manage the symptoms and slow the progression are available. Arthritis refers to conditions that involve pain and inflammation of the joints. Patients with arthritis seek treatment, mainly due to the uncomfortable pain that restricts their daily routines. Non-steroidal anti-inflammatory drugs (NSAIDs) are extensively used in the management of arthritis-related pain. They are effective and available as prescription and non-prescription products.

Non-prescription NSAIDs are often used without taking into account the contraindications as they are easily available 1. Concerns of the usage of NSAIDs are associated with gastrointestinal (GI) side effects and increased cardiovascular risk 2.

Diclofenac sodium is an NSAID having anti-inflammatory, analgesic, and antipyretic actions. Pharmacokinetically, it rapidly metabolizes due to its relatively short half-life of 1-2 h and has an absolute bioavailability of 55% when administered orally due to first pass metabolism effect 3, 4. Patients require multiple dosing regimens resulting in reduced compliance and poor therapeutic effect significantly. Concerns of the long term usage of diclofenac sodium, like most NSAIDs, is associated with GI problems such as peptic ulcers and GI bleeding along with risks of cardiovascular adverse effects 5. These concerns of GI side effects have generated more researches to overcome the side effect and improve the therapeutic effects of diclofenac sodium, leading to the development of various conventional oral formulations of diclofenac sodium. Microsphere drug delivery is a multi-particulate system, has been researched to improved absorption and reduces GI irritation that uniformly spreads at the site of absorption, which is usually formulated using polymers. However, polymeric microspheres have short residence time at the site of absorption leading to the development of mucoadhesive microspheres by incorporating mucoadhesive polymers that allow the microspheres to adhere to the mucous tissue and thus, prolong the residence time 6.

The formulation of mucoadhesive polymer-based microspheres using ionotropic gelation techniques is well established 10. By using this ionotropic gelation technique allows the polymers to be physically cross-linked to form microspheres and to avoid the utilization of expensive and toxic reagents 11. This technique requires counterions to form the cross-linking.

In previous studies, TFGSM demonstrates promising mucoadhesive properties and is easily available and inexpensive. It offers a new alternative of plant-based mucoadhesive polymer to be used in the formulation of mucoadhesive microspheres. To best of knowledge; no studies have formulated TFGSM-based mucoadhesive microspheres containing diclofenac sodium. It has the potential to prolong the residence time at the absorption site, thereby, eliminating frequent dosing and improve patient compliance resulting in improve therapeutic effects. It is beneficial, especially to patients that require long term use of diclofenac sodium such as patients with arthritis.

Methods: Trigonella foenum-graecum L. seeds (200 g) were soaked in 1.5 l of distilled water for 24 h and boiled using water bath until the preparation of slurry is obtained. The slurry was allowed to cool down and kept in the refrigerator overnight to settle out undissolved materials. The clear upper solution was gradually poured and concentrated at 60 ºC using a water bath to one-third of its original volume.

The solution was allowed to cool down and transferred into three times the volume of acetone with continuous stirring. The precipitate was washed repeatedly with acetone and dried at room temperature for 24 h. The isolated material was passed through sieve number 80 and stored in desiccators until further use 15.

Solubility: Solubility of TFGSM was performed by dissolving in distilled water and organic solvents such as chloroform and methanol 12-13.

Swelling Index: TFGSM  1 g was transferred into a 25 ml glass stoppered measuring cylinder, and 25 ml of distilled water was added and shaken vigorously every 10 min for 1 h and will be allowed to stand for 24 h. The volume occupied by the TFGSM was measured. The process was repeated three times and the swelling index was calculated from the mean of three readings 14, 16.

Loss on Drying: Loss on drying was determined by weighing 1 g of TFGSM and heated at 105 ºC until a constant weight is achieved using a hot air oven 17.

The percentage of moisture loss on drying was calculated using the following formula:

Percentage Yield: The yield of the TFGSM was calculated using the formula below:

Preparation of TFGSM-Based Mucoadhesive Microspheres of Diclofenac Sodium: Sodium alginate and TFGSM was weighed and separately dissolved in purified water and mixed to form a polymer dispersion mixture. Diclofenac sodium was added to the polymer dispersion mixture and mixed thoroughly. The resulting polymer-drug dispersion mixture was added drop-wise via a syringe with a needle (No. 23) into calcium chloride (10% w/v) solution. The added droplet was retained in the calcium chloride solution for 15 min to complete the reaction and to produce spherical microspheres.

Microsphere was collected by decantation and washed with water and dried overnight at room temperature 20. Formulations of TFGSM-based mucoadhesive microspheres of diclofenac sodium are shown in Table 1.

Percentage Yield: The percentage yield of the formulated microspheres was determined using the equation below:

Determination of DEE: 100 mg of microspheres was crushed and transferred in a 250 ml volumetric flask, and the volume was made up to 250 ml using phosphate buffer, pH 7.4 and kept for 24 h with occasionally shaking at 37 ± 0.5 °C. After the specified time, the mixture was stirred at 500 rpm for 20 min using magnetic stirrer. The polymer remaining after the disintegration of microspheres was removed by filtering through Whatman filter paper (No. 40) 15. The drug content in the filtrate was determined using a UV spectrophotometer at 276 nm against an appropriate blank. The DEE (%) of these prepared microspheres was calculated by the following formula:

In-vitro Drug Release Studies: The dissolution rate of microspheres was tested using dissolution apparatus, rotating basket method with two different pH values, pH 1.2, and pH 7.4. The basket was covered with 100 mesh nylon cloth to prevent the escape of the microspheres. The dissolution rates will be measured at 37 ± 1 °C, 50 rpm speed. A weighed quantity of microspheres containing diclofenac sodium (100 mg) was added to 900 ml of 0.1 N HCl, pH 1.2. The test was carried out for 2 h and then continued in phosphate buffer (pH 7.4) for next 8 h. 5 ml of aliquots were collected at regular time intervals, and the same amount of fresh dissolution medium was replaced into dissolution vessel to maintain the sink condition throughout the experiment. The collect aliquots were filtered and diluted to determine the absorbance using UV spectrophotometer at 276 nm against appropriate blank 15.

Swelling Study: The swelling behavior of the TFGSM-based mucoadhesive microspheres of diclofenac sodium was evaluated by swelling index test 15. Swelling index test of TFGSM-based mucoadhesive microspheres of diclofenac sodium was performed in 0.1 N HCl (pH 1.2) and phosphate buffer (pH 7.4) aqueous mediums. 100 mg of microspheres were placed in the beaker of dissolution apparatus containing 500 ml of respective media. The experiment was carried out at 37 ± 1 °C under 50 rpm paddle speed. The swelled microspheres were removed at a predetermined time interval and weighed after drying the surface by using tissue paper.

The swelling index was determined using the following formula:

Ex-vivo Mucoadhesion Testing: The mucoadhesivity of TFGSM-based mucoadhesive microspheres of diclofenac sodium was evaluated by the ex-vivo wash-off method. A 1-cm by a 1-cm piece of rat stomach mucosa was tied onto a glass slide (3-inch by 1-inch) using thread. Exactly 50 microspheres were placed onto a wet tissue specimen, and the prepared slide was hung onto the groove of the disintegration test apparatus. The tissue specimen was given a regularly up and down movement in a beaker containing 900 ml of 0.1 N HCl (pH 1.2) and phosphate buffer (pH 7.4) separately at 37 ± 0.5 °C. At the end of the time interval, the number of microspheres that remained attached to the stomach mucosa was recorded 21.

In-vitro Drug Release Kinetics and Mechanism: To determine the drug release kinetic and mechanism for the formulated TFGSM-based mucoadhesive microspheres of diclofenac sodium, the in-vitro data was evaluated to find a suitable mathematical model to fit the in-vitro release behavior. The following mathematic models were evaluated to determine the drug release per unit time: zero order and first order. Higuchi and Korsmeyer-Peppas model was used to evaluate the mechanism of drug release 15.

Where Q represents the drug release amount in time t andQ0 is the start value of Q; k is the rate constant.

Where Q represents the drug released amount in time t andQ0 is the start value of Q; k is the rate constant.

Where Q represents the drug released amount in time t and k is the rate constant.

Where Q represents the drug releases amount in time t, k is the rate constant, and n is the release exponent, indicative of drug release mechanism.

The yield of TFGSM isolated from Trigonella foenum-graecum L. seeds obtained was less (3.17% w/w) when compared to that of previous isolation performed by other researchers having a higher yield (17.36% w/w) 15. Various tests were performed to evaluate the physicochemical properties and to understand the properties of the TFGSM powder obtained from the isolation of Trigonella foenum-graecum L. seed. Results of physicochemical characteristics of TFGSM powder are shown in Table 2.

It was found that in most formulations when the polymer ratio of the formulation increases, the percentage yield also increases. However, low percentage yield can be seen even with high polymer ratio; this might be occurred due to blockage of the needle, wastage of the drug-polymer solution and loss during transferring and washing. The percentage yield ranged from 87.40 to 97.80%. The DEE (%) of F1 to F8 range of 77.97 to 98.05%, as shown in Table 3. It was found that the DEE (%) was influenced by the increasing polymer ratio of sodium alginate and TFGSM. As the viscosity of the polymeric solution increased, the DEE (%) decreased. This might be due to the increasing TFGSM resulting in a viscous polymeric solution which might have prevented the drug release to the calcium chloride solution. From all eight formulations, F6 was found to have the highest DEE (%) of 98.05.

The in-vitro dissolution studies of all eight formulations (F1 to F8) of TFGSM-based mucoadhesive microspheres of diclofenac sodium using a dissolution tester USP (Electrolab, TDT-08L), basket method in 900 ml of pH 1.2 for 2 hrs and pH 7.4 for 8 h at 37 °C and 50 rmp. At each time interval, 10 ml of each formulation was taken, and UV absorbance was recorded. The formulations exhibits a percentage cumulative drug release (CDR, %) in the range of 88.50% to 97.70% and were found that in formulations with decreasing ratio of TFGSM was higher. It was found that diclofenac sodium release from these microspheres in pH 1.2 was slow, less than 15.90% after 2 h. This event might be due to shrinkage of alginate at acidic pH as alginate is known to be pH sensitive 23, 24. In comparison, the drug release was observed to be more rapid in phosphate buffer, due to the higher swelling rate of these microspheres. F6 showed the highest CDR (%) of 98.50%. The in-vitro drug release of all formulations F1 to F8 is shown in Fig. 1. 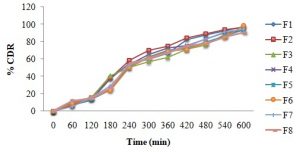 This was also observed to be closest to the Higuchi model (R2 = 0.964). Finally, the best fitting of the zero-order model indicates that the drug release from F6 microspheres followed a controlled-release pattern. The value of diffusional exponent (n) determined from the Korsmeyer-Peppas model (n = 0.188), indicating the drug release from these microspheres followed Fickian mechanism. Fickian diffusion refers to the solute transport process in which the polymer relaxation time is much greater than the characteristic solvent diffusion time 28.

CONCLUSION: TFGSM-based mucoadhesive microsphere of diclofenac sodium by ionotropic gelation techniques were successfully formulated and evaluated. The study shows that the TFGSM-based microspheres formulated were able to prolong gastric residence time by swelling slowly in the stomach and adhering to the stomach mucosa which then will subsequently move to the intestine and swells more allowing the release of the drug. Thus, TFGSM serves as a potential mucoadhesive excipient in the formulation of the controlled-release mucoadhesive microsphere.