ABSTRACT: The solid dosage form is the easiest method of administering drugs for systemic effect. All dosages forms are made by two main components one is API and second is excipient. Excipient is present in bulk quantity and is required for binding the API. There are mainly two techniques uses for manufacturing the tablets (i) wet granulation (ii) direct compression. Wet granulation is a time consuming process, and direct compression technique is time saving, cheap and convenient for pharmaceutical industries. In direct Compression technique, microcrystalline cellulose powder properties are very versatile. There are many processes used for drying of MCC. Out of these, we evaluated MCC with three different type of drying process i.e. Spray dried (SPD), spin flash dried (SFD) and bulk dried. Different drying methods do not change the chemical parameters of microcrystalline cellulose, only difference being the physical attributes of the MCC powder, it’s morphology and it’s consequents flow properties which directly effect the tablet properties i.e. compaction, hardness and  in-vitro disintegration among others.

INTRODUCTION: Any pharmaceutical product or formulation is fundamentally composed of two parts: Active Pharmaceutical Ingredient (API) and excipient. API is the substance that has direct effect on the ailment, while excipient is the inert substance that provides stability, bulk, protection to the API, and also improves the bioavailability and helps in increasing the shelf-life of the drug 1. A number of excipients are used in pharmaceutical industries in the manufacturing of medicament to enhance stability, absorption, flowability. Excipients are inert material and can be natural, semi-synthetic and synthetic in nature 2.

Among aforementioned groups, natural excipients are widely used because they have limited traces, ease of availability, and are economically cheap as compared to their synthetic counterparts. Micro-crystalline Cellulose (MCC) is one of the most commonly used natural excipient that is obtained from wood pulp 5.

Basically MCC is a polysaccharide biomolecule made up of glucose subunit. Microcrystalline cellulose is one of them. It is used in bulk in pharmaceutical, cosmetic, food and other industries 5. It is considered as an ideal excipient due to its multiple uses, in pharma industries used as a binder, as filler, as disintegrant, as lubricant, as glident as adsorbent and as anti-adherent, in food industries used as stabilizer, anti-caking agent, emulsifier, stabilizer, texture modifier, suspending and fat substitute agent and in cosmetic industries used as thickener agent, binder fat substitute, stabilize, suspending and anti caking agent 6.

MCC is prepared by hydrolyzing wood pulp with dilute mineral acid. During hydrolysis, the accessible amorphous regions are hydrolyzed and a higher degree of polymerization of wood pulp to lower degree of polymerization microcrystalline cellulose is obtained 7. It is fine, white color crystalline, granular and free flowing powder. MCC exhibits a high dilution potential thus broadly used in direct compression formulation 8. In pharmaceutical industries direct compression has progressively gained ground because of being economically advantageous. Direct compression (DC) is only two step process such as mixing and compressing 9. In DC process, with high production with low cost, the qualities of tablets are outstanding on all parameters. In direct compression technique excipient plays a very important role, it fulfills certain requirements which includes good binding and flow properties, compatibility with API and other additional excipients 10, 11. Microcrystalline cellulose is used in direct compression due to the extremely good bonding properties as a dry binder 12.

In the present study, microcrystalline cellulose was dried by different methods and evaluated for its physical parameters. Scanning electron microscope was used for studying their morphology. Percentage crystallinity and flowability were tested by using X-ray diffraction and rheometer. Other parameters like hardness, friability, thickness, weight variation and in-vitro disintegration time were also evaluated. The present study is aimed towards comparing morphology, flow properties of microcrystalline cellulose dried by spray, bulk and flash drier and their resultant effects on tablet properties.

Spry Drier (SPD) HiCelTM Microcrystalline Cellulose: 13 Dissolving grade wood pulp was cut into small pieces and charged into glass line reactor. Mineral acid, temperature, pressure, and time are used as catalyst in reaction. In this reaction, cellulose polymer chain breaks down in presence of water and mineral acid at specific temperature and pressure in required time. This reaction is known as hydrolysis. After hydrolysis, wood pulp breaks down into slurry. Neutralized pH by washing with water and ammonia. Then make suspension by addition of water in wet MCC and dried with the help of spray drier.

Bulk Drier AceCelTM Microcrystalline Cellulose: Hydrolysis, washing and filtration are same as spray dried MCC, only drying procedure is different. In this process MCC wet cake is crushed with the help of mixer and dried with bulk drier.

Untapped Density: Untapped density is known as loose bulk density (LBD), it is analyzed through graduated measuring cylinder class A. Take 20 gm of MCC sample (WS) using weight balance (Toledo, Model No.-ML 802 /A01) and poured into a graduated A grade 100 ml capacity cylinder slowly from the sidewall. Level the surface of sample in cylinder by slow movement and note down the occupied volume (SV) and calculate the untapped density of MCC by using following formula.

The rotational Shear Cell module consists of a vessel containing sample (powder) and Shear head to induce both vertical and rotational stresses. The Shear head moves downwards inserting the blades into the powder and induces a normal stress as the shear head face contacts the top of the powder. The Shear head continues to move downward until the required normal stress (σ) is stable. Slow rotation of the shear head then begins, inducing a Shear stress (τ). A Shear plane is established below the ends of blades. When the powder bed resists the rotation of the Shear head, the Shear stress increases until the bed fails of Shears, at this time maximum Shear stress is observed and the normal Stress is maintained constant throughout the Shear step.

We can define flow behaviour parameter mention in below Table 1.

A computer controlled absorber is mounted directly in front of the detector and is used to attenuate the beam by about 2 orders of magnitude. Dried microcrystalline cellulose approximately 1g sample is used for this analysis. Scan was obtained from 10 - 85 degree 2 theta at steps of 0.05 and a counting time of 0.5 s/step. Calculate the percentage crystallinity of microcrystalline cellulose using below formula.

Weight Variation: Random 10 tablets were taken from each batch and each tablet was weighted individually using electronic digital balance (Mettler Toledo, Model No.-MS204S /A01). The average weight of all tablets was calculated by following formula.

Hardness: Random 10 tablets were taken from each batch. Electronic digital hardness test machine (Labindia tablet hardness tester, Model No.-TH1050 M) was used for hardness test. Individually, a tablet was placed between two anvils, force was applied to the anvils, and the crushing strength that just caused the tablet to break was recorded. Finally the reading was taken in kp [kgf] on display of hardness machine.

The percentage was calculated by following formula. According to USP the tablets should not lose more than 1% of their total weight.

Disintegration Time: This test was carried out at 37 ± 2 °C in 600 ml of dematerialized water. Six tablets were taken and one tablets was introduce in each tube disk was placed and basket was positioned in 1 liter beaker containing 37 ± 2 °C temperature of water. Note down tablet disintegration time

Hausner Ratio: Hausner ratio of both samples are mentioned in the Table 2. Bulk dried MCC (AceCelTM102) has higher hausner ratio. 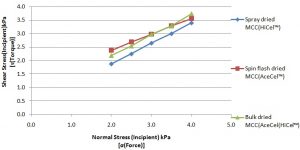 TABLE 3: SUMMARY OF RESULT OBTAINED BY SHEAR AND WALL FRACTION TEST AT 6kPa USING FT4 POWDER RHEOMETER AND THEIR PARAMETER MEASURED DURING THE SHEAR TEST 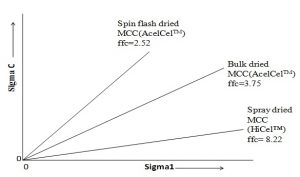 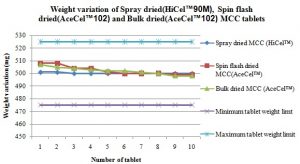 Hardness: Individual tablet hardness variation is mentioned in Fig. 8 and average hardness of MCC tablets are mentioned in Table 5.

Friability: Percentage friability of MCC tablets are mentioned in Table 5 and Fig. 9.

CONCLUSION: Spray dried (SPD) microcrystalline cellulose (HiCelTM90M) has higher crystallinity at 89.16%. We have found rod shape and big particles and equal particle distribution in SEM analysis. It has higher ffc value and less cohesive that represents its free flowing behaviour. It has excellent tablet profile too in terms of weight uniformity, hardness, friability and disintegration time. Though Spin flash dried (SFD) microcrystalline cellulose (AceCelTM102) has found almost same crystallinity and Similar SEM analysis, but other parameters like flowability, hardness, friability, disintegration time are different than SPD MCC. It is cohesive in nature and has poor flowability than SPD MCC. In tablet profile, hardness is less and friability and disintegration time is more through it passes under pharmacopoieal limits. In SEM analysis we have found that bulk dried MCC particles form clusters and these clusters represent its unequal particle distribution. Its tabletting profile has found poor results.

CONFLICT OF INTEREST: The authors state and confirm no conflict of interests. No direct funding was received for this study.