Categories Menu
Home » U.V SPECTROPHOTOMETRIC METHOD FOR THE ESTIMATION OF MESALAZINE IN BULK AND ITS PHARMACEUTICAL DOSAGE FORMS

U.V SPECTROPHOTOMETRIC METHOD FOR THE ESTIMATION OF MESALAZINE IN BULK AND ITS PHARMACEUTICAL DOSAGE FORMS

U.V SPECTROPHOTOMETRIC METHOD FOR THE ESTIMATION OF MESALAZINE IN BULK AND ITS PHARMACEUTICAL DOSAGE FORMS

Mesalazine is used, either orally or rectally, as an anti-inflammatory agent in treating ulcerative colitis and, to a lesser extent, Crohn's disease. Mesalazine is a white to pinkish crystalline powder. It is slightly soluble in cold water and alcohol; more soluble in hot water, soluble in hydrochloric acid. A simple UV spectrophotometric method was developed for the determination of Mesalazine (MEZ) in pure and its pharmaceutical formulations. Mesalazine exhibiting max absorbance at 210 nm in methanol and obeyed linearity in the concentration range of 0.2-50 mg/ml. The proposed method was statistically validated.

INTRODUCTION: The scope of developing and validating analytical methods is to ensure a suitable method for a particular analyte more specific, accurate and precise. The main objective for that is to improve the conditions and parameters, which should be followed in the development and validation. Chemically Mesalazine (MEZ) is 5-amino salicylic acid. It is an anti-inflammatory drug structurally related to salicylates and active in inflammatory bowel disease. Tablet formulations containing 250, 400 and 500 mg MEZ are available in the market. Literature survey revealed that Mesalazine is estimated by HPLC and micellar electrokinetic chromatography. No UV spectrophotometric methods have been reported for estimation of MEZ in single component formulation. Hence, an attempt has been made to develop new UV methods for its estimation in pharmaceutical formulations with good accuracy, simplicity, precision and economy.

Instrumentation: Spectral and absorbance measurements were made on an ELICO SL-159 UV-Vis spectrophotometer by using 1 cm quartz cells. Dhona balance was used for weighing the samples. Commercially available tablets of Mesalazine were procured from the local market and estimated.

In order to ascertain the wavelength of maximum absorption (λmax) of the drug, different solutions of the drugs (10 μg/ml and 20 μg/ml) in methanol were scanned using spectrophotometer within the wavelength region of 200 – 380 nm against Phosphate buffer (pH- 3.6) as blank. The resulting spectra were shown in fig 1 and the absorption curve showed characteristic absorption maxima at 298 nm for Mesalazine.

Preparation of Stock Solutions: Standard stock solution was prepared by dissolving 25 mg of each drug in 25 ml of Phosphate Buffer (pH-3.6) to get concentration of 1mg/ml (1000 μg/ml) solutions.

Preparation of Working Standard Solutions and construction of standard graph: The prepared stock solution was further diluted with Phosphate Buffer (pH-3.6) to get working standard solutions of 10 mg/ml and 100 mg/ml of mesalamine to construct Beer’s law plot for pure drug, different aliquots of Mesalazine were taken and diluted to 10 ml with Phosphate Buffer (pH-3.6). The absorbance was measured maximum at 245 nm, against Phosphate Buffer (pH-3.6) as blank. The results were shown in table (1). The standard graph was plotted by taking concentration of drug on x-axis and absorbance on y-axis and was shown in Fig. (b)  The drug has obeyed Beer’s law in the concentration range of 0.2-50µg/ml. 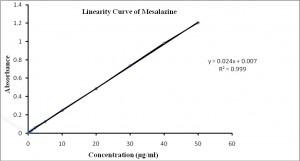 Table 3: Recovery from the formulation:

Precision: The precision of the proposed method was ascertained by actual determination of eight replicates of fixed concentration of the drug within the Beer’s range and finding out the absorbance by the proposed method. From this absorbance, Mean, Standard deviation, % RSD was calculated. The readings were shown in Table 4.

Accuracy: To determine the accuracy of the proposed method, recovery studies were carried out by adding different amounts (80%, 100%, and 120%) of bulk samples of mesalamine within the linearity range were taken and added to the pre-analyzed formulation of concentration 20mg/ml. From that percentage recovery values were calculated. The results were shown in Table 5.