Several potent antibiotics are available for the treatment of UTI, but increasing drug resistance among bacteria has made therapy of UTI difficult. Bacteria have the genetic ability to transmit and acquire resistance to drugs 4. Plant metabolites are great source of bioactive compounds and serve as better alternative to combat with the diseases caused by multidrug resistant organisms. Since plant secondary metabolites are natural isolates, they are safe to use as therapeutic agent. In India plant parts and their extracts are in use from very ancient time.

WHO reported that majority of Indian population depends on plants and their extracts for primary health care 5. A number of studies have been conducted on different plant parts to prove their antimicrobial efficacy 6, 7, 8, 9, 10. Plant extracts are mixture of many minor and major compounds of different nature therefore the chance of bacterial resistance is minimized.

Also the synergistic effect of the mixture of phytochemicals play important role to use plant extracts as antimicrobial agents 11. Organic solvent fractions of Ocimum sanctum has been reported to have activity against UTI infections 12, 13. Fresh leaves of Coleus aromaticus were also found to be active against UTI causing bacteria 14. Present work focuses on antibacterial activity of essential oils of Coleus aromaticus and Ocimum sanctum on UTI causing microorganisms Staphylococcus aureus, Klebsiella oxytoca, Proteus vulgaris, Escherichia coli, Klebsiella pneumoniae, Pseudomonas aeruginosa and Proteus mirabilis. The work also focuses on the comparison of the activity of two varieties of Ocimum sanctum (Rama Tulasi and Shyama Tulasi) grown locally. The constituents of the oils were analysed by GC-MS method.

Analysis of the essential oils: Oil samples were analyzed by Gas Chromatography, HP 5890 Ser. III, autosampler HP 7636 with detection FID, electronic integration system. Optima 625 column was used, 1.8 μm (60 m X 0.32 mm) with Nitrogen gas as a carrier. Temperature program was as follow: Initial temperature 40°C held for 3 minutes, increased up to 230°C at the rate of 3°C/minutes, increased to final temperature 250°C at the rate of 20°C/minutes and held at the final temperature for 10 minutes. Analysis time was 43.3 minutes. Samples (1 μl) were injected for analysis. GC-MS analysis was done on HP 5971 using the same column and temperature program but with helium gas as a carrier. The ion source temperature and ion inlet temperature were 200oC and 210oC respectively. The ionization voltage and detector voltage was 70 eV (electron Volt) and 1.5 Volts respectively. Compound identification was done on the basis of available GC-MS data library.

These clinical strains were obtained from Institute of Medical Science, Banaras Hindu University, Varanasi, India. After that the density of fresh culture of each strain was prepared to McFarland Standard 1 in saline water and with help of cotton swab were inoculated all over the surface of Muller- Hinton agar plates. Subsequently, sterilized filter paper (Whatmann filter paper no. 1) discs (diameter 6mm) were saturated with different volumes of three types of essential oils were put on agar plates. The plates were incubated at 37°C for 18 h for the observation of inhibition zone. Essential oils showing antimicrobial activities were later tested for minimal inhibitory concentration (MIC) against each bacterial culture.

To maintain the same inoculums density for activity test, McFarland standard 1 according to National Committee for Clinical Laboratory Standards was prepared 15. After solidification of agar plates, with help of sterilized swab bacterial suspension were spotted on plates. One plate contains 16 bacterial strains. Inoculated plates were allowed to dry up a little and then incubated at 37oC for overnight. After 24 hours, essential oils containing plates were compared with control plate containing sterile saline (1%) solution. The minimum inhibitory concentration was evaluated by observing for the absence of visible growth of each bacterium. The experiment was performed three times for consistency studies.

RESULTS AND DISCUSSION: All of the three oils were found to be transparent yellow liquid, with strong aromatic smell. Yields and density of three types of essential oils had significant difference. Percentage yields (w/v) were 0.37, 0.30, and 0.24 whereas the densities were 1.14 g/ml, 1.10 g/ml and 1.21 g/ml for Rama Tulasi, Shyama Tulasi and Coleus aromaticus respectively. 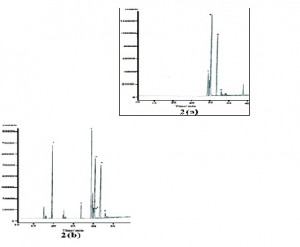 Comparative study of two verities of Ocimum sanctum: Inhibitory activity of the two varieties of Ocimum sanctum oils against Klebsiella oxytoca, Proteus vulgaris, E. coli and Klebsiella pneumoniae were significantly different (Table 1). GC-MS and GC-FID analysis results (Table 2) clearly show remarkable qualitative and quantitative difference in their chemical composition. Rama Tulasi contains eugenol (22.98%) as the major constituent of the oil, followed by (E)-methylcinnamate (16.00%) and β- caryophyllene (15.90%). Shyama Tulasi, on the other hand, contains eugenol methyl ether as the major component (39.78%) of the oil. Concentration of eugenol was less (15.41%) whereas (E)-and Z-methyl cinnamate were completely absent.

Different groups of worker have studied antibacterial activity of plant volatile oils on different organisms 16. In most of the cases, the presence of free phenolic -OH group in compounds (Figure 3), as in eugenol and carvacrol, gives better inhibitory action in comparison to alkylated analogues. 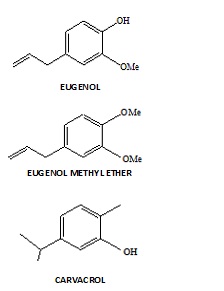 CONCLUSION: From the study we conclude that essential oils of the three plants of Lamiaceae family showed antimicrobial activity against UTI infection. Difference in antibacterial activities is due to presence of different type of phenolic compounds as a major constituent of oils. Thus folk medicinal plants can be as effective as modern drugs to combat urinary tract infections.