ABSTRACT: Ophthalmologists generally treat ocular infections by giving prophylactic anti-microbial therapy as they do not have data from culture analysis. The indiscriminate use of anti-microbials can lead to drug resistance, difficulty in treating infections, and increased chances of severe ocular damage. The purpose of this study was to analyze the utilization of anti-microbial drugs in the ophthalmology department at a tertiary care hospital. This is an observational study conducted in a tertiary care hospital. Details of total 740 prescriptions were collected from out-patient records and analyzed. The total 740 prescriptions, 56.4% were males, and 43.6% were females. The highest number of patients was in the age group of 61-70 years. Post-operative cataract cases were in maximum (51.9%) followed by conjunctivitis (15.3%). A total of 846 anti-microbial drugs were analyzed from 740 prescriptions. Average number of anti-microbials per prescription was 1.15. Eye drops were the most commonly prescribed dosage formulation. Moxifloxacin was the most commonly prescribed anti-microbial drug as monotherapy. The most commonly prescribed fixed-dose combination was gatifloxacin plus prednisolone. The frequency and the duration of anti-microbial therapy were recorded in all the prescriptions. The present study shows that the prescribing patterns of ophthalmologists are based on clinical knowledge, expertise and is in accordance with the rational utilization of anti-microbials. In this study, the information regarding the frequency and duration of the study were recorded in all the prescriptions. Restraint on polypharmacy revealed in our study could be advantageous in reducing the potential adverse effects and economic burden on the patients.

INTRODUCTION: Medicines are essential components of the health care system, and modern health care is dependent on the availability of necessary medicines. They cure diseases, promote health and save the lives of the public. The medicines are doubtlessly one of the important weapons of mankind to combat illness 1.

World Health Organization (WHO) in 1977 defined drug utilization research as the marketing, distribution, prescription, and use of drugs in society, with special emphasis on the resulting medical, social and economic consequences 2.

A prescription is an authorized document given to a patient by a physician that contains instructions to take a medicine or treatment. As stated by WHO, rational prescription of drugs requires that the patients receive appropriate medicines to their clinical ailments, at appropriate time intervals, in proper doses to fulfill individual requirements for an adequate duration 3. The rational use of drugs is crucial for effective healthcare.

However, irrational use of drugs, considered as a problem all over the world and is more prevalent especially in the developing countries due to irrational prescribing, dispensing and use of medicines 4. The irrational prescribing of drugs is a well-recognized problem worldwide. It is not just responsible for the adverse effects but also leads to exacerbation of the disease and causes psychological suffering to the patients as well as to the members of the family. Thus, irrational prescription causes a financial burden to the patient 5. According to an estimation done by WHO, more than half of all the medications are prescribed, administered or sold inappropriately.

The abuse, underuse or misuse of prescriptions results in wastage of valuable medicines 6. To avoid such problems and provide an adequate standard of treatment, every member of the healthcare system should practice rational use of drugs. Important standards for rational drug use are correct diagnosis, proper prescription, proper dispensing, and patient compliance. In India, a study found that prescriptions did not reflect a proper clinical diagnosis of the patients, antibiotics in 60% of the prescriptions were prescribed without valid indications, and steroids were given irrationally in 75% of prescriptions 7.

Ophthalmic infections such as conjunctivitis, blepharitis, keratitis, dacryocystitis and endophthalmitis may damage important structures of eye and adnexa, which can possess potential risk in terms of visual morbidity and blindness if left untreated. Successful treatment of ocular infections depends on the understating of anti-microbial properties related to the mechanism of action and on pharmacokinetic properties such as Absorption, Distribution, Metabolism, and Excretion (ADME). Conjunctivitis is the most commonly occurring disease reported by treating doctors worldwide. On the other end, endophthalmitis is the grave complication resulting due to ocular trauma and surgeries, especially cataract surgery 8.

In the field of ophthalmology, physicians usually treat ocular infections by giving prophylactic anti-microbial therapy as they often do not have data from culture analysis. There is a fluctuating trend in the resistance of common pathogens. Thus, indiscriminate use of anti-microbials leads to resistance, difficulty in treating the infections, and increased chances of severe ocular damage 9. Regardless of the higher drug concentrations achieved in ocular tissues with the use of topical anti-microbials, cases of clinical failure and/or less than optimal cure rates with empirical therapy are increasing. These reports emphasize the need to reevaluate the available treatment options and design improved strategies for the prevention and treatment of ocular infections 10. The purpose of this study was to analyze the drug utilization pattern, create awareness among ophthalmologists regarding rational prescription, minimize the errors of prescription and improve therapeutic benefit.

MATERIALS AND METHODS: Study design, setting, and study population: The present study was an observational study carried out among the out-patients admitted to the department of Ophthalmology in Justice K. S. Hegde Charitable Hospital, Deralakatte, Mangaluru between January 2017 to December 2017. Data was collected visiting the Out-Patient Department of Ophthalmology thrice a week. A total of 740 prescriptions were collected using convenient sampling and were analyzed. Out-patients visiting the Ophthalmology Department of Justice K. S. Hegde Charitable Hospital during the study period who needed anti-microbial therapy were included in the study. Patients who were not willing to participate and provide their consent were excluded.

Ethical Considerations: After obtaining approval from the Institutional Ethics Committee (IEC), Ref, No: INST.EC/145/2016-17, the study was undertaken for a period of 12 months.

Statistical Analysis: Data was tabulated on a Microsoft Excel spreadsheet and analyzed as mean frequency and percentages. 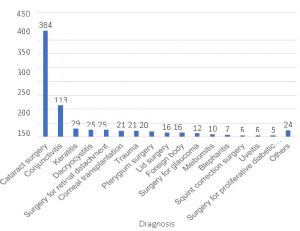 FIG. 1: FREQUENCY OF OCULAR DISORDERS IN THE OUT-PATIENT DEPARTMENT OF OPHTHALMOLOGY (N=740) 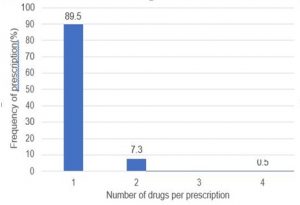 FIG. 2: FREQUENCY OF A NUMBER OF ANTI-MICROBIALS PRESCRIBED PER PATIENT (N=740) 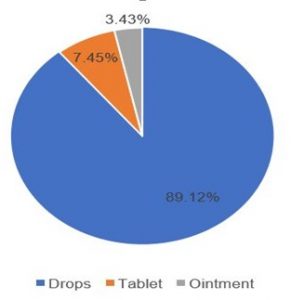 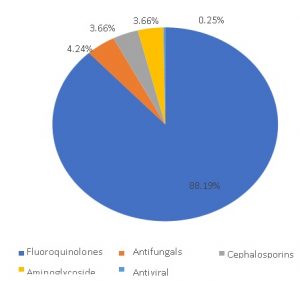 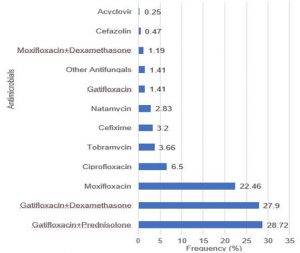 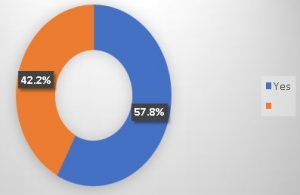 A total of 740 prescriptions were analyzed in the study period; the proportion of male patients (56.4%) was more compared to female patients (43.6%). A similar pattern was observed in some previous studies 11, 12. In our study, the highest number of patients were in the age group of 61- 70 years. Other studies showed age groups of 41-50 years and 46-60 years, respectively. This could be coincidental as demographic variations are common 13, 14. In our study, among the 740 prescriptions analyzed, the majority were post-operative cataract cases (51.9%) followed by conjunctivitis (15.3%). Since our hospital is a tertiary care center, many cases of cataracts are generally referred from the periphery for surgical intervention. This is in accordance with the study done by Suman RK et al., 13 which showed cataract (25%) and conjunctivitis (24%) were the most common disorders; conjunctivitis as the most common disorder encountered was attributed to poor sanitation 15.

In the present study, a lower average number of anti-microbials per prescription was documented. This pattern shows restraint on over-prescription of drugs and polypharmacy. An average number of drugs should be preferably low as polypharmacy increases the risk of drug-drug interactions, adverse effects, errors in prescriptions, increased bacterial resistance, and increases the economic burden on the patients. In our study, the total number of anti-microbials prescribed was 846. The anti-microbial therapy in most of the diseases in ophthalmology was based on clinical symptoms and was prophylactic to prevent the development of infections in postoperative cases. Other studies in ophthalmology in India have reported that anti-microbials were the most commonly used drugs 17.

Fluoroquinolones, either as a single anti-microbial or FDCs with steroids, were the most commonly prescribed class of anti-microbials in this study that accounted for 88.19% (746/846) of the total prescribed anti-microbials. Fourth-generation fluoroquinolones like moxiflxacin and gatifloxacin are preferred as they are having a wider spectrum of activity against gram-negative as well gram-positive organisms with lesser adverse effects. In our study, a total of 57.80% (489/846) FDCs of antibiotic plus steroids were prescribed. As the prescriptions in our study had cataract cases in maximum number, the postoperative prophylaxis of cataract extraction is administered using a combination of a topical steroid with an antibiotic, especially as an eye drop. Hence FDCs were most commonly prescribed. Other studies done by Suman RK et al., Gang war A et al., and Jadhav PR et al. reported the frequencies of use of FDCs to be 40%, 36.98%, and 44.67%, respectively 13, 14, 15, 16, 17. The major concern of ophthalmologists performing cataract surgery is the risk of ocular infection. Antibiotic prophylaxis in cataract surgery is essential to prevent infections.

In the present study, 12.30% (104/846) of drugs were prescribed from the National List of Essential Medicine 2015, which was consistent with previous other studies done by Dutta SB et al., 12, Jain A et al., 2 and Jadhav PR et al. 17 where they reported 16.31%, 24.45% and 19.48% of the drugs were prescribed from NLEM respectively. In our study, though less percentage of drugs prescribed from NLEM, anti-microbials such as moxifloxacin, gatifloxacin, tobramycin, and voriconazole prescribed were in accordance with the national anti-microbial use guidelines of infectious diseases, 2016, India 23.

CONCLUSION: Drug utilization studies were done at regular intervals to ensure benefits and safety to the patients. The present study intends to describe patterns in prescribing anti-microbials for various conditions in ophthalmology. The present study at a tertiary care hospital shows that the prescribing patterns of ophthalmologists are based on clinical knowledge, expertise and are in accordance with rational utilization of anti-microbials. In this study, the information regarding the frequency and duration of the study were recorded in all the prescriptions. Restraint on polypharmacy revealed in our study could be advantageous in reducing the potential adverse effects and economic burden on the patients. Antibiotics were administered prophylactically in post-operative cataract cases to prevent infections.

ACKNOWLEDGEMENT: The authors remain grateful to NITTE (Deemed to be University) for providing the opportunity and facilities to carry out this research study.