A simple, precise and accurate UV-Spectrophotometric method has been developed and validated for estimation of Efavirenz in bulk and tablet dosage form. It shows maximum absorbance at 320 nm with methanol and water (30:70). Estimation was carried out by A(1%1cm) and by comparison with standard. Calibration graph was found to be linear (r2 =0.09657) over concentration range of 1-4μg/ml. The proposed methods appear to be simple, sensitive, and reproducible when checked for parameters like accuracy, precision, limit of detection for routine determination of Efavirenz in bulk as well as in tablet. The methods can be adopted in its routine analysis.

INTRODUCTION: Efavirenz (EFV, brand names Sustiva and Stocrin) is a non-nucleoside reverse transcriptase inhibitor (NNRTI) and is used as part of highly active anti retroviral therapy (HAART) for the treatment of a human immune deficiency virus (HIV) type 1. Efavirenz is chemically described as (S)-6-chloro-(cyclopropylethynyl)-1,4-dihydro-4-(trifluoromethyl)-2H-3, 1-benzoxazin-2-one. Its empirical formula is C14H9ClF3NO2. 1.  Efavirenz is a white to slightly pink crystalline powder with a molecular mass of 315.68 g/mol. It is practically insoluble in water (<10 µg/mL) 1.

For HIV infection that has not previously been treated, the United States Department of Health and Human Services Panel on Antiretroviral Guidelines currently recommends the use of efavirenz in combination with lamivudine/zidovudine (Combivir) or tenofovir/ emtricitabine (Truvada) as the preferred NNRTI-based regimens in adults and adolescents. Efavirenz is also used in combination with other antiretroviral agents as part of an expanded post exposure prophylaxis regimen to reduce the risk of HIV infection in people exposed to a significant risk (e.g. needle stick injuries, certain types of unprotected sex etc.). 1.  The usual adult dose is 600 mg once a day. It is usually taken on an empty stomach at bedtime to reduce neurological and psychiatric adverse effects. Efavirenz was combined with the popular HIV medication Truvada, which consists of tenofovir and emtricitabine, all of which are reverse transcriptase inhibitors. This combination of three medications approved by the U.S. Food and Drug Administration (FDA) in July 2006 under the brand name Atripla, provides HAART in a single tablet taken once a day. It results in a simplified drug regimen for many patients  Efavirenz is used to treat HIV infection. It is never used alone and is always given in combination with other drugs.

The decision on when to start treatment should take into account CD4 count, HIV viral load, treatment history, resistance profiles and patient preference. Since the preliminary publication of the results of the ACTG 5142 trial in 2006 which compared efavirenz against lopinavir, efavirenz has been used as first line treatment in preference to the protease inhibitors. The ACTG 5095 trial showed that the potency of efavirenz is maintained at all CD4 counts and HIV viral loads. [1] Efavirenz is not effective against HIV-2, as the pocket of the HIV-2 reverse transcriptase has a different structure, which confers intrinsic resistance to the NNRTI class 2.

As most NNRTIs bind within the same pocket, viral strains which are resistant to efavirenz are usually also resistant to the other NNRTIs,nevirapine and delavirdine. The most common mutation observed after efavirenz treatment is K103N, which is also observed with other NNRTIs 3, Psychiatric symptoms,  including insomnia, nightmares, confusion, memory loss, and depression, are common 4 and more serious symptoms such as psychosis may occur in patients with compromised liver or kidney function 5, 6, rash, nausea, dizziness and headache may occur. A general guideline about efavirenz and pregnancy states that efavirenz can cause birth defects and should not be used in women who might become pregnant 7.

A later study, however, found no increased risk of overall birth defects among women exposed to efavirenz during the first trimester of pregnancy compared with exposure to other antiretroviral drugs 8.  Safety in children has not been established Use of efavirenz can produce a false positive result in some urine tests for marijuana 9, 10.  Abuse  of efavirenz   by  crushing  and  smoking  the  tablets  for  supposed hallucinogenic and dissociative effects has been reported in South Africa, where it is used in a mixture known as whoonga 11, 12, 13.

As with most HIV treatments, efavirenz is quite expensive. A one month supply of 600 mg tablets costs approximately $550 in April 2008 14. Some emerging countries have opted to purchase Indian generic 15 such as Efavir by Cipla Ltd 16. EFA is a non-nucleoside reverse transcriptase inhibitor (NNRTI) and is used as a part of highly active anti retroviral therapy for the treatment of  a human immune deficiency virus 17.

The drug is used in combination with other anti retroviral agents for the treatment of HIV-1 infection in children and adults. The usual dose of EFA is 600 mg per day (usually give nat bed time).Several methods have been reported for determination of efavirenz.  Careri et al., (1993) achieved separation of  alkynes by reversed phase HPLC using ruthenium complexes 18. 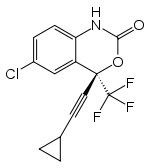 FIG. 1: THE STRUCTURE OF EFAVIRENZ

Standard Solution: The pure drug of Efavirenz about 10 mg was weighed accurately and dissolved in solvent methanol: water (30:70) to get the concentration of 100μg/ml. Three different methods applied were calibration curve method, single point standardization and two point bracketing method. Solvent system selected was Methanol: Water (30:70). The linearity range was found to be 1μg/ml to 4μg/ml.

Calibration Curve Method 23: In this method, absorbances of a set of standard solutions of reference substance at concentration encompassing the sample concentration are measured and calibration graph is constructed. Calibration curve method is essential for determination of absorbance which has a non-linear relationship with concentration.

Preparation of Calibration Curve: Wavelength of maximum absorption was found to be 320 nm. The absorbance at 320 nm of eight standard solutions having the concentration range from 1 - 4μg/ml was plotted against concentration to get calibration curve.

Analysis of Tablet Formulation 23: The Efavirenz tablet solution was prepared in methanol AR grade (30ml) and was further diluted with double distilled water (70ml) as described earlier. The concentration of 1.0, 1.5, 2.0, 2.5, 3.0, 3.5, 4.0 μg/ml. Solutions were prepared respectively and the absorbances were measured. The values of absorbance were kept in the calibration curve equation as started above and concentration was evaluated.

Analysis of Tablet Formulation 23: Efavirenz Tablet solution was prepared in methanol AR grade (30ml) and distilled water (70ml) as described earlier. The concentration of 1.0, 1.5, 2.0, 2.5, 3.0, 3.5, 4.0 μg/ml solutions were prepared respectively and the absorbance were measured. The obtained absorbance value were put in above equation, concentration were calculated.

Analysis of Tablet Formulation 23:  Efavirenz Tablet solution was prepared in methanol AR grade (30ml) and distilled water (70ml) as described earlier. The concentration of 1.0, 1.5, 2.0, 2.5, 3.0, 3.5, 4.0 μg/ml solutions were prepared respectively and the absorbance were measured. The obtained absorbance value were put in above equation, concentration were calculated.

Validation of Methods: The proposed methods were validated with respect to linearity, precision and accuracy.

RESULTS AND DISCUSSION: The absorbance was measured at 320 nm against methanol and the sample solution was computed from calibration curve fig. 1. 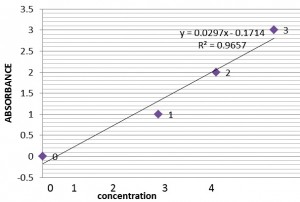 The methods were applied for the analysis of the drugs in the tablet formulation. To evaluate the validity and reproducibility of the methods, known amount of pure drug was added to the sample and mean recovery was found to be about 100%.

Validation of Methods: Statistical evaluation is displayed in the table 2 and 3.

CONCLUSION: Thus, it can be concluded that the methods in present investigation were simple, sensitive and reproducible when checked for parameters like accuracy, precision and limit of detection for routine determination of Efavirenz in bulk as well as in tablet.