A. Vidhya * and S. Arunadevi

INTRODUCTION: Fruits and vegetables constitute the major sources of carotenoid in the human diet. They are important dietary sources of Vitamin A. Carotenoids are a family of pigmented compounds that are synthesized by plants and microorganisms but not animals 1. Lycopene, intake has been particularly associated with protection from prostate cancer, lung cancer and lower the risk of developing coronary heart disease 2.

In recent years the antioxidant properties of carotenoids have been the major focus of research. Although best known as an antioxidant, both oxidative and non-oxidative mechanisms are involved in lycopene's bioprotective activity. Lycopene's configuration enables it to inactivate free radicals. As free radicals are electrochemically imbalanced molecules, they are highly aggressive, and are always ready to react with cell components and cause permanent damage. Oxygen-derived free radicals are the most reactive species. These toxic chemicals are formed naturally as byproducts during oxidative cellular metabolism. As an antioxidant, lycopene has a singlet oxygen- quenching ability twice as high as that of beta-carotene (vitamin A relative) and ten times higher than that of alpha-tocopherol (vitamin E relative). The objective of this study was to develop methodology for the rapid, accurate, and sensitive extraction and determination of lycopene in watermelon using GC-MS and FT-IR spectroscopy and to evaluate the in-vitro antioxidant activity

Red flesh watermelons were purchased from a local supermarket. The fruits were washed, drained and wiped - dry. It was cut into a few small portions and then blended to paste-like state for approximately 2 minutes using a blender. During the blending process, intermittent stops were required to minimize heating effects on the watermelons. The homogenized sample was centrifuged at 1000 g for 30 minutes and at 4oC being filtered under suction. The sample was stored at-20oC until use within a week.

Approximately 0.6 g of sample was weighed and added to 5 ml of 0.05 % (W/V) BHT in acetone, 5 ml of 95 % ethanol and 10mL of hexane. The homogenate was centrifuged at 400g for 15 minutes at 4oC. After that, 3mL of distilled water was added. The vials were agitated for 5 minutes and left at room temperature to allow phase separation. The absorbance of upper hexane layer was measured in a 1cm-pathlength quartz cuvette at 503 nm using using ELCO, SL 164 UV- VIS spectrophotometer. Hexane was used as blank. The lycopene content in the sample was estimated according to the equation 5.

Where A 503 is the absorbance of upper hexane layer 6. UV-VIS light absorption pattern of lycopene was kinetically monitored in the range of 503 nm using ELCO, SL 164 UV- VIS spectrophotometer.

GC-MS technique was used in this study to identify the phytocomponents present in the extract 7. An analysis was performed on a JEOL GCMATE II GC-MS with Data system is a high resolution, double focusing instrument, maximum resolution. The electron impact ionisation method was analysed. The linear velocity of the high pure helium carrier gas was 30 cm/s. The injector temperatures were 220º C. The oven temperature was programmed from 50 to 25º C at 10º C/ min and held for 50 min.

The spectra or fingerprints of the selected samples were obtained using FT-Raman and/or FT-IR spectroscopy. The samples of FT-IR were prepared by using potassium bromide disks. FT-Raman spectra were obtained using a PERKIN ELMER SPECTRUM ONE at the resolution 4 cm -1 with the spectral range of 4000 – 450 cm-1.

The percentage of remaining radical was calculated by using this formula:

The percentage of reducing power was calculated by using the formula:

RESULTS AND DISCUSSION: Solutions of lycopene in n-hexane at different concentrations were prepared and absorbance was measured at 503 nm. It was found that lycopene were the most important contribution in the absorption spectrum bands at 503 nm. The content of lycopene in the samples can be estimated by the molar extinction coefficient. By properly substituting the molar extinction coefficient of lycopene in hexane (17.2 X 104 M–1 cm–1) as well as the molecular weight (536.9 g) and by changing the units, 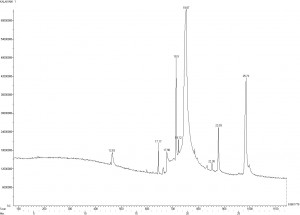 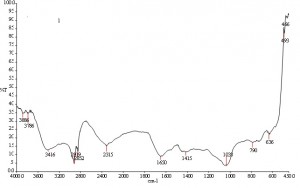 EC50 is defined as the concentration of antioxidant necessary to scavenge 50% of DPPH radicals.

The percentage of remaining radical was calculated by dividing the absorbance of the sample with that DPPH control and multiplied by 100. The inhibition of radical was expressed in terms of the EC50 278.55 and ARP values. Higher ARP value of 0.0035 was observed in the lycopene extract, which reflects higher efficiency of antioxidants in the fruit (Table 2).

Fe (III) reduction is used as an indicator of electron donating activity, which is an important mechanism of phenolic antioxidant action. In the reducing power assay, the presence of antioxidants in the samples would result in the reducing of Fe3- to Fe2- by donating an electron. Amount of Fe2- complex can be monitored at 700 nm indicates an increase in reductive ability. The extracts had shown good reducing power (Table 4). The IC50 value of the extract was 0.227µg/ml.

CONCLUSION: UV- Vis, GC-MS and FTIR fingerprinting was the best method for chemical characterization and compound identification and this present study determined the fingerprints of the active lycopene compounds. The present study revealed that the extract of watermelon has in- vtiro antioxidant activity. This study had significantly identified the properties of compound present in the lycopene extract, which act as an antioxidant compound. The chemical fingerprint profiles of antioxidant compounds of watermelon identified in the present study may enable drug manufacturers to adjust the proportion of herbs and prepare a standardized product with consistent activity.

ACKNOWLEDGEMENT: The authors wish to thank the Principal and Management of DKM College for Women, Vellore for providing the facilities to carry out this work.

A. Vidhya * and S. Arunadevi