ABSTRACTThe simple, accurate and precise HPTLC method was developed for quantification of curcumin content in dietary supplement formulation. In this method, individual curcuminoids (curcumin, demethoxy curcumin and bisdemethoxy curcumin) with piperine were resolved using mobile phase n-hexane: ethyl acetate: methanol: formic acid (8: 2: 1: 2-3 drops v/v) on a plate precoated with silica gel 60 F254 and quantified densitometrically in absorbance mode at 421 nm. The Rf value of curcumin was found to be 0.29. Linearity for curcumin was established between concentration range of 100-180 ng/spot with correlation coefficient of 0.999. The method was further validated as per ICH guidelines. The LOD and LOQ values for curcumin were found to be 27.3 ng and 82.7 ng respectively. The results of percent recovery and repeatability studies with standard deviation (≤2%), concluded that the developed method was accurate and precise and can be used for routine analysis of curcumin in dietary supplement formulations

INTRODUCTION: Curcumin, [1,7-bis (4-hydroxy-3-methoxyphenyl)-1, 6- heptadiene-3, 5-dione] is the major yellow pigment extracted from turmeric, a commonly used spice, derived from the rhizome of Curcuma longa Linn1. It is a product obtained by solvent extraction of turmeric i.e., the ground rhizomes of Curcuma longa L. (Curcuma domestica Valeton) and purification of the extract by crystallization.

To increase bioavailability of curcumin in human body most companies in the current scenario are manufacturing curcumin based dietary supplements with piperine as an important ingredient 2. Literature survey has revealed few HPTLC methods for estimation of curcuminoids in, different parts of C. longa plant 3, in turmeric powder 4, for simultaneous estimation of curcumin and piperine 5.

Chemicals and reagents: Standard curcumin was purchased from Loba Chemicals, Pune. Other solvents and reagents used were of E-merck and of analytical grade.

Assay of Dietary Supplement Formulation: Formulation analysed by this method claimed to have 712.5 mg of curcumin per serving (in each tablet).  For analysis of sample, twenty tablets were taken and individually weighed then their average weight (1.205g) was calculated. Now weighed tablets were crushed to powder and tablet powder equivalent to the average weight was transferred to a 100 ml volumetric flask, to it 50 ml of methanol was added and sonicated for 10 min. Volume was made up to 100 ml with methanol and then resonicated for 5 min.

The flask was shaken for 2 min and the resultant solution was then centrifuged at 1800 rpm for 5min. This extraction process yielded a sample solution which had the concentration of curcumin equal to 7.125 mg/ml. Further dilutions were made in methanol to make the final concentration of curcumin in sample 0.07 mg/ml. A spot of 1.5 μl (100 ng) from this sample solution was applied on a precoated TLC plate and developed. Its area was then determined by densitometric scanning at 421nm (Figure 2). 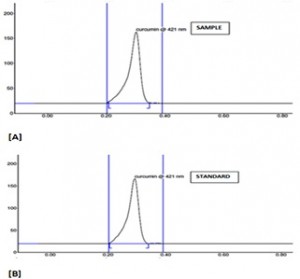 FIGURE 2: REPRESENTATION OF A CHROMATOGRAM SHOWING PEAKS OF (A) CURCUMIN (Rf 0.29) IN DIETARY FORMULATION AND (B) CURCUMIN STANDARD (Rf 0.29).

Validation parameters: The method has been validated as per ICH guidelines 11.

Linearity: For establishing linearity different volumes 10, 12, 14, 16 and 18 μl of standard stock solution were applied on precoated TLC plates to get concentration in range of (100-180 ng/ spot) curcumin. The plates were then developed in the CAMAG twin through chamber and scanned densitometrically at 421nm (Table 1, Figure 3). 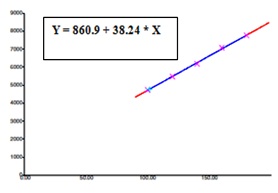 Precision: Precision of analytical method was expressed in terms of % RSD. Repeatability was performed by sample application and measurement of peak areas of six replicates of same concentration 120 ng/spot of curcumin (Table 2).

LOD and LOQ: Limit of detection and limit of quantitation were determined based on the standard deviation of the response and the slope as per the ICH guidelines. They were calculated based on the following formulas:

Sigma = Standard deviation of the response.

Slope = Slope of the calibration curve.

Specificity: The specificity of the method was determined to check any possible interference of mobile phase or diluents while performing the method. 14 µl of the standard solution, 4 µl of sample solution and 5 µl each of mobile phase and diluents were applied on the TLC plate, developed and scanned under standard chromatographic conditions (Figure 4).

Recovery studies: Accuracy of the proposed method was ascertained on the basis of recovery studies performed by standard addition method at different levels corresponding to 80%, 100% and 120% of the label claim. A known amount of curcumin was added to preanalysed tablet powder which was then mixed, extracted and analysed at standard optimized chromatographic condition (Table 3).

RESULTS AND DISCUSSION: A variety of individual solvent and solvent mixtures in various compositions were tried. A mobile phase containing n-hexane: ethyl acetate: methanol: formic acid (8:2:1:2-3 drops v/v) was found to be most suitable for better resolution of curcumin with Rf value of 0.29 (Figure 5). Linearity was established by least square linear regression analysis of the calibration spot. Curcumin showed good linear response in concentration range 100-180 ng/spot with correlation coefficient of 0.999.

FIGURE 5: PHOTO DOCUMENTATION OF CURCUMINOIDS AND ITS CORRELATION WITH STANDARD CURCUMIN

LOD and LOQ of the developed method was found to be 27.3 ng and 82.7 ng respectively, which indicates sensitivity of the method. Low % RSD (1.417) obtained by comparing results of peak area of curcumin for repeatability, suggested an excellent precision of the developed method. Method was found to be specific and didn’t show any undue interference of diluents (methanol) or mobile phase (blank) on curcumin peak. Recovery studies at three different concentration levels with % RSD ≤ 2 inferred non interference of sample matrix. The drug content found in the assay indicated that there was no interference from the excipients present in the tablet.

CONCLUSION: The developed HPTLC method is accurate, precise, specific and low cost. Statistical analysis proves that the method is reproducible and selective and can be applied for routine analysis of curcumin in dietary supplement formulations.

ACKNOWLEDGMENTS: Authors are thankful to Anchrom Pvt. Ltd, Mulund, (Mumbai), INDIA for providing there vital guidance and HPTLC instrumentation facility. Authors are also grateful to Dr S. B. Bhise Principle, Sinhgad Institute of Pharmaceutical Sciences, Lonavala, for his encouragement and constant support. It is author’s immense pleasure to acknowledge Mr. Rahul Sabnis, for his sincere efforts of providing the dietary supplement formulation from the U.S market for analysis.