ABSTRACT: A simple, precise, specific and accurate high-performance thin-layer chromatographic method has been developed for the simultaneous determination of Emtricitabine (EMB) and Tenofovir (TEN) in pharmaceutical dosage form. The separation was carried out on Merck HPTLC aluminum plates of silica gel 60 F254, (20×10 cm) with 250 μm thickness using toluene: ethylacetate: methanol in the ratio (2:8:1 v/v/v) as mobile phase. HPTLC separation of the two drugs followed by densitometric measurement was carried out in the absorbance mode at 272 nm. The drugs were resolved satisfactorily with Rf values of 0.44 and 0.68 for EMB and TEN, respectively. The linear regression analysis data for the calibration plots showed good linear relationship with r2 = 0.9999 and 0.9995 for EMB and TEN, respectively, in the concentration range of 40–400ng spot−1 for EMB and 200–700ng spot−1 for TEN. The method was validated for precision, robustness, specificity and accuracy. The limits of detection and quantitation were 20 and 40ng spot−1, respectively, for EMB and 100 and 200ng spot−1, respectively, for TEN. The proposed HPTLC method can be applied for identification and quantitative determination of EMB and TEN in bulk drug and drug formulation.

INTRODUCTION: Emtricitabine and Tenofovir (Fig.1 and Fig.2) belong to the category of antiretroviral drugs. Emtricitabine is chemically 4-Amino - 5 - fluoro - 1 - [2-(hydroxymethyl) -1, 3-oxathiolan-5-yl]-pyrimidin-2-one 1, 2. It is classified as a nucleoside reverse transcriptase inhibitor. Chemically Tenofovir is 1-(6-Aminopurin-9-yl)-prapan-2-yl-oxymethylphosphonic acid 3, 4. 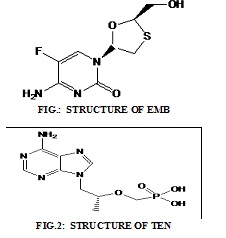 Reagents and Chemicals: Working Standards of pharmaceutical grade EMB and TEN were gifted by M/s Ranbaxy Laboratories. The tablet Forstavir-EM containing 200mg of EMB and 300mg of TEN was procured from the local pharmacy. All the chemicals and reagents used were of HPLC grade obtained from M/s Merck Ltd., Mumbai, India.

The HPTLC plates were prewashed with methanol and activated at 110◦C for 5min prior to chromatography. The samples were spotted in the form of bands 6mm width with a Camag 100 microlitre sample syringe (Hamilton, Bonaduz, Switzerland) on silica-gel-precoated HPTLC aluminum plate 60 F254, ((20 × 10 cm) with 250μm thickness (E. Merck, Darmstadt, Germany, supplied by Anchrom Technologies, Mumbai) using a Camag Linomat V applicator (Switzerland). A constant application rate of 0.1μLs−1 was used and the space between two bands was 6 mm. Linear ascending development was carried out in 20 cm × 10cm twin trough glass chamber (Camag, Muttenz, Switzerland) saturated with the mobile phase. The mobile phase consisted of toluene: ethylacetate: methanol in the ratio (2:8:1v/v/v) and 20mL was used per chromatography run. The optimized chamber saturation time with mobile phase was 30 min using saturation pads at room temperature (25◦C). The length of chromatogram run was 80mm and run time was 20min. Densitometric scanning was performed using a Camag TLC scanner III in the reflectance-absorbance mode and operated by winCATS software (V1.1.4, Camag).

The slit dimension was kept at 5mm × 0.45mm and the scanning speed was 10mm s−1. The source of radiation used was a deuterium lamp emitting a continuous UV spectrum between 200 and 400 nm. All determinations were performed at ambient temperature with a detection wavelength of 272nm. Concentrations of the compound chromatographed were determined from the intensity of the diffused light. Evaluation was by peak areas with linear regression.

For calibration, EMB 10 mg and TEN 10mg were weighed separately, dissolved in methanol in 10mL volumetric flasks and volume adjusted to give standard stock solution of 1000 ppm. This standard stock solution was further diluted with methanol to obtain working standard solutions in a concentration range of 40-400 ng/band for EMB and 200-700 ng/band for TEN. Each concentration was applied six times on the HPTLC plate. The plate was then developed using the previously described mobile phase. The peak areas were plotted against the corresponding concentrations to obtain the calibration graphs. Linear calibration curves were generated using least-squares linear-regression analysis.

To determine the content of EMB and TEN simultaneously in pharmaceutical dosage form, twenty tablets were weighed accurately and average weight calculated. Quantity equivalent to 200mg of EMB and 300mg of TEN was taken in 100ml volumetric flask and dissolved in 25ml of methanol and the final volume was made up with the same solvent. The solution was filtered through 0.45µm nylon syringe filter. From the resultant solution 10 ml was diluted to 100ml which contains 200ng/µL of EMB and 300ng/µL TEN. 2µl volume was spotted for six times to achieve a final concentration of 400ng/spot for EMB and 600ng/spot for TEN. The plate was developed in the previously described chromatographic conditions and the peak area of the spots was measured at 272nm and the concentrations in the samples were determined using multilevel calibration developed on the same plate under the same conditions using linear regression equation.

The optimized HPTLC method was validated for precision, robustness, accuracy and specificity as per the ICH guidelines. The precision of the method was verified by repeatability (intraday) and intermediate precision studies. Repeatability studies were performed by analysis of three different concentrations of working standard of 40, 160, and 400 ng spot−1 for EMB and 200, 400 and 600 ng spot−1 for LEV. Method repeatability was achieved by repeating the same procedure six times on the same day for intraday precision. The intermediate (interday) precision of the method was checked by performing same procedure on different days under the same experimental conditions. The repeatability of sample application and measurement of peak area were expressed in terms of relative standard deviation (% RSD).

The robustness was studied by evaluating the effect of small but deliberate variations in the chromatographic conditions. Following the introduction of small changes in the mobile phase composition (±0.1mL for each component), the effect on the results was examined. Mobile phases having different compositions were tried and chromatograms were run. The amount of mobile phase was varied over the range of ±5%. The time from spotting to chromatography and from chromatography to scanning was varied by +10 min. In order to estimate the limit of detection (LOD) and limit of quantitation (LOQ), the signal-to-noise ratios of 3: 1 and 10: 1 were regarded as LOD and LOQ.

Selection of Analytical Wavelength: UV spectrum of EMB and TEN showed maximum absorbance at 282nm and 257nm, respectively. Further, in situ HPTLC spectral overlain of EMB and TEN was taken and 272nm was selected as scanning wavelength.

Optimization of Mobile Phase: Optimization of mobile phase was done with a view to separate EMB and TEN drugs. The composition of solvent constituting the mobile phase in this work was varied in order to study its effect on resolution of drugs.  The analyte should have distinct Rf values for good resolution. Initially, individual solvents of different polarity was tried for both the drugs and combinations from previous reports such as ethylacetate - methanol, chloroform- methanol were tried. Chloroform and methanol 9:1 for TEN was tried which gave an Rf value around .78 for TEN. But the system was not suitable for EMT whereas ethlyacetate-methanol 9:1 was found to be suitable for EMT.

Hence chloroform was replaced by ethyl acetate. Ethyl acetate and methanol combination could separate both the compounds sufficiently. But for proper satisfactory resolution the polarity was adjusted with toluene. Finally, However effective separation of both drugs was achieved using the optimal mobile phase toluene: ethylacetate: methanol in the ratio (2:8:1 v/v/v).This optimised mobile phase was used for further analysis. The development chamber was saturated for 30min. The development was done for 80mm on the plate and the development time was 20 min. After development, drying of the plates was done using air. Simultaneous detection of EMB and TEN was performed at 272nm since both compounds are well known to exhibit sufficient ultraviolet absorption at this wavelength. The drugs were resolved satisfactorily with Rf values of 0.44 and 0.68 for EMB and TEN, respectively (Fig.3) 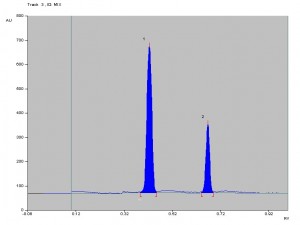 FIG. 3: DENSITOGRAM OF EMB AND TEN

Validation of the Method: Linear relationships were observed by plotting drug concentration against peak areas for each compound. EMB and TEN showed linear response in the concentration range of 40–400 ng spot−1 and 200–700 ng spot−1, respectively with square of correlation coefficient (r2) of 0.9999 and 0.9995 for EMB and TEN, respectively. (Table 1) The % RSD values depicted in Table 2 show that the proposed method provides acceptable intraday and interday variation of EMB and TEN with respect to working standard. The repeatability of real sample application and measurement of peak areas were expressed in terms of % RSD and were found to be 0.51 and 0.16 for EMB and TEN, respectively.

The standard deviation of the peak areas was calculated for each parameter and the % RSD was found to be less than 2%. The low values of the % RSD, as shown in Table 3, indicate the robustness of the method. The signal/noise ratios 3:1 and 10:1 were considered as LOD and LOQ, respectively. The LOD and LOQ were found to be 20, 40 ng spot−1 and 100, 190ng spot−1 for EMB and TEN, respectively (Table 4)

bStandard deviation of residuals from line.

TABLE 4: LIMIT OF DETECTION (LOD) AND LIMIT OF QUANTITATION (LOQ)

The specificity was noticed by the complete separation of EMB and TEN peaks. As shown from the data in Table 5, satisfactory recovery percentage with small relative standard deviations (% RSD) is obtained at various added concentrations. The results indicate that the method is highly accurate for simultaneous determination of EMB and TEN. Satisfactory results were obtained for both drugs in market sample analysis which are in good agreement with the label claim. (Table 6)

TABLE 6: ANALYSIS OF THE MARKETED FORMULATION

CONCLUSION: The developed HPTLC technique is precise, specific, robust and accurate and can be conveniently used for the routine analysis of EMB and TEN in pharmaceutical preparations. The procedure can be readily used for selective analysis of drugs and repeatable results are obtained without interference from auxiliary substances. The method is rapid and cost-effective and the results also meet the ICH guidelines for validation of pharmaceutical TLC methods.

ACKNOWLEDGEMENTS: We are thankful to M/s Ranbaxy Laboratories Ltd. for providing the gift sample of standard Emtricitabine and Tenofovir.