ABSTRACT: A rapid, sensitive and specific RP-HPLC method was developed and validated for determination of Rosuvastatin Calcium in bulk and tablet dosage form. Chromatography was carried out on a Enable C18G (250 x 4.6 mm i.d.,5µ) column using filtered and degassed mixture of acetonitrile and water in the ratio of 75:25 % v/v as mobile phase at a flow rate of 0.6 ml/min and effluent was monitored at 252 nm. The method was linear over the concentration range of   5 – 40 µg/ml with a correlation coefficient of 0.999. The retention time of the drug was 3.097 mins. The proposed method was validated by determining sensitivity, accuracy, precision, robustness studies. The developed method was effectively applied to tablets of Rosuvastatin Calcium and the % assay of the drug was found to be 99.98 %. The method is simple, rapid, accurate, precise and reproducible and hence can be applied for routine quality control analysis of Rosuvastatin Calcium in pure and tablet dosage form.

INTRODUCTION: Rosuvastatin calcium, a new member of a class of cholesterol lowering drugs commonly referred to as “statins”, was approved for the treatment of dyslipidemia1-3. Rosuvastatin calcium (ROS) is chemically bis [(E)-7-[4-(4-fluorophenyl)-6-isopropyl - 2- [methyl - (methyl sulfonyl) amino] pyrimidin-5-yl] (3R, 5S)-3, 5-dihydroxy hept- 6-enoicacid] calcium salt (Fig. 1). It is a synthetic lipid lowering agent, selective and competitive inhibitor of 3-hydroxy-3-methylglutaryl coenzyme A (HMG CoA) reductase, the key rate-limiting enzyme of cholesterol biosynthesis in liver. ROS is used to reduce the amounts of LDL cholesterol, total cholesterol, triglycerides and a lipoprotein B in the blood.

ROS also modestly increases the level of HDL cholesterol in the blood. These actions are important in reducing the risk of atherosclerosis, which in turn can lead to several cardiovascular complications such as heart attack, stroke and peripheral vascular disease. 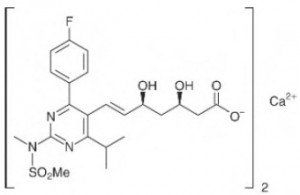 ROS peak plasma concentrations were reached by 3–5 hrs following oral administration in humans 4. To the best of knowledge, Rosuvastatin Calcium has been determined by Spectrophotometric methods5-8, Stability indicating methods10-12, and RP-HPLC13-15, LC-MS16-17. The present research work describes the rapid, accurate, sensitive and reproducible RP-HPLC method for estimation of Rosuvastatin Calcium from the tablet formulation.

Shimadzu HPLC comprising of LC-20AD binary gradient pump, a variable wavelength programmable SPD-20A detector and an SCL 20A system controller. A Rheodyne injector fitted with a 20μL loop was used and data were recorded and evaluated by use of LC solutions software.

ROS pure sample was procured as gift sample. The tablets were procured from local pharmacy. Label claim of each tablet for ROS was 10 mg respectively. Acetonitrile HPLC grade was purchased from E.Merck. Milli-Q (Qualigens) water HPLC grade was used throughout the experiment.

Chromatographic analysis was performed on a Enable C18G (250 x 4.6 mm i.d., 5µ) column. The mobile phase consisted of acetonitrile: water (75: 25 v/v) which is degassed and filtered through 0.2 μm membrane filter before pumping into HPLC system.

10mg of ROS was accurately weighed and transferred in 100 ml volumetric flask and the content in the flask was dissolved in 25ml of Acetonitrile. After the immediate dissolution, the volume was made up to the mark with same solvent. This standard stock solution was further diluted with mobile phase to get 100μg/ml of ROS. The chromatogram for standard ROS was shown in Fig. 2.

Commercial tablets of ROS were taken and their average weight was determined, they were crushed to fine powder. Powder equivalent to 10mg of ROS was taken in 100ml volumetric flask and dissolved in 75ml of acetonitrile with shaking for 5-10 minutes and then sonicated. The supernatant liquid was filtered through 0.2µm membrane filter and then transferred to 100 ml volumetric flask and volume was made up with acetonitrile. After that 10 ml of the above solution was diluted up to 100 ml with mobile phase.

System Suitability: System suitability is used to verify, whether the resolution and reproducibility of the chromatographic system are adequate for analysis to be done. The parameters like retention time, number of theoretical plates, tailing factor, HETP were investigated by injecting standard solutions of the drugs six times and the results are given in Table 1. From the results it was observed that all the values are present within the limits indicating good performance of the system.

Linearity: Standard solutions for linearity tests were prepared from the primary standard stock solution in the concentration range of 5-40μg/ml. The prepared solutions were injected and their peak areas were measured and tabulated in Table 2. The calibration curve was constructed by plotting concentration on X- axis versus and peak areas on Y- axis and linear regression equation was calculated as shown in (Fig. 3).The calibration curve was found to be linear with correlation coefficient of 0.999. 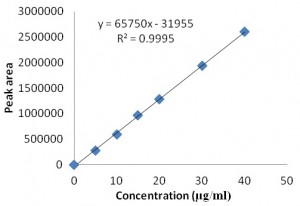 Specificity was checked for the interference of excipients in the analysis of sample solution and was determined by injecting sample solution with added exipients under optimized chromatographic conditions to demonstrate separation of ROS from excipients. There is no interference of excipient peak on the peak of ROS indicating the high specificity of method.

Method Precision: Method precision was performed by preparing six different samples from the same sample pool. Each solution was injected in triplicate under the same conditions and mean value of peak area response for each solution was taken. The relative standard deviation of ROS in six sample solutions was calculated. Relative standard deviations obtained for ROS was 0.21%. The results are tabulated in Table 3.

The Inter-day precision of the sample was measured on three concentrations of the drug on three different days .The measurement of the peak areas were expressed in terms of % RSD and were found to be <1%. The results are shown in Table 4.

The accuracy of the method was established using recovery technique i.e. external standard addition method. The known amount of standard was added at three different levels to pre analysed sample. Each determination was performed in triplicate. The results of recovery study were presented in Table 5.

(Where σ = the standard deviation of the response and S = Slope of calibration curve).

The results were shown in Table 7.

The assay of marketed sample (Tablet formulation) for Rosuvastatin calcium is summarized in Table 8.

The limit of detection and limit of quantification was found to be 0.017μg/ml and   0.052μg/ml, indicating the sensitivity of the method. The percentage of recovery in the range of 99.6-100.3% indicates that the proposed method is highly accurate. The % RSD value <1% for both method and interday precision indicate the high precision of method. The use of acetonitrile and water in the ratio of 75: 25 % v/v resulted in peak with good shape and resolution. No interfering peaks were found in the chromatogram within the run time indicating that excipients used in tablet formulations did not interfere with the estimation of the drug by proposed HPLC method.

ACKNOWLEDGEMENT: The authors are grateful to Dr. L. Rathaiah, Chairman of Lavu educational society for providing necessary facilities to carry out the above research work.