ABSTRACT: This experimental work present the development and validation of a simple, rapid, accurate and precise RP-HPLC method for the simultaneous estimation of amlodipine besylate (AMB) and nebivolol hydrochloride (NBH) in bulk drug and pharmaceutical dosage forms. The chromatographic separation was carried out with AGILENT 1120 liquid chromatograph in an isocratic mode using Kromasil ODS column (250 x 4.6mm x 5µ particle size) with a mobile phase of mixed acetate Buffer pH 5: acetonitrile (60:40v/v) and the eluents were monitored at 268nm. The retention times of AMB and NBH were 5.26min and 6.84min respectively. The method was found to be linear over the concentration range of 5-25µg/ml for amlodipine besylate and 10-50µg/ml for nebivolol hydrochloride with a correlation coefficient of 0.999. The percentage recoveries of AMB and NBH were found to be 99.01-101.5 % and 99.2-101.0% respectively. The proposed RP-HPLC method was validated according to ICH guidelines and was employed for routine quality control analysis in bulk and combined dosage forms.

It is official in British pharmacopoeia.

A literature search revealed that very few methods 5-12 are published for the determination of combination of Amlodipine and Nebivolol. The objective of the present work was to design a validation procedure which can efficiently determine both drugs in tablet dosage form within a short run time and with good resolution. The present RP-HPLC method was validated by following ICH guidelines.

Optimized Chromatographic Condition: Kromasil ODS column (250 × 4.6mm, 5μ particle size) Agilent column was used as the stationary phase. The mobile phase comprised of acetonitrile and acetate buffer pH 5 and in proportion of 40:60 (v/v) with pH adjusted to 5.0 by using glacial acetic acid. Injection volume was 20μl and run time was 20min and flow rate 1.2ml/min. The column was maintained at ambient temperature and the eluent was detected at 268nm.

Preparation of Mobile Phase: Mobile phase was prepared by mixing Acetonitrile and Acetate buffer pH 5 in the ratio of 40:60 v/v was sonicated for 15 min and filtered through a 0.45µm membrane filter paper.

Preparation of Standard Solutions: Standard stock solution (1000μg/ml) of Nebivolol hydro-chloride and Amlodipine besylate were prepared separately in mobile phase comprised of acetonitrile and acetate buffer pH 5 and in proportion of 40:60 (v/v) with pH adjusted to 5.0 by using glacial acetic acid. The working standard solutions were prepared and further diluted in mobile phase to Nebivolol hydrochloride and Amlodipine besylate contain a mixture of in over the linearity ranges from 10-50μg/ml and 5-25μg/ml respectively (working stock solution A).

Preparation of Sample Solution: Twenty tablets were weighed and finely powdered. A quantity of powder equivalent to 5mg of NBH and 2.5mg of AMB was weighed and transferred to a 25 ml volumetric standard flask and added 10 ml of mobile phase. The sample was kept in an ultrasonic bath for 20 min and further diluted to 25 ml by using mobile phase to get 50μg/ml of NBH and 25μg/ml of AMB. Then it is filtered through 0.45μ membrane filter paper (Working stock solution B).

The proposed method was evaluated by its correlation coefficient and intercept value calculated in the statistical study. The calibration curves for AMB and NBH were shown in figure 5&6 respectively and their corresponding linearity parameters were given in table 2.

RESULTS AND DISCUSSION: From the UV spectrophotometric identifications for simultaneous estimation of Nebivolol hydrochloride and Amlodipine besylate in overlay mode showed that both the drugs absorb appreciably at 268nm, hence 268nm was selected as the detection wavelength. Several mobile phases were tried initially for the simultaneous quantitation of both the drugs, but optimum results were observed with a mobile phase composition of acetate buffer with pH 5 and acetonitrile in the ration of 60:40v/v. The two peaks were symmetric and sufficiently resolved.

System suitability was assessed by injecting 5 replicate injections of 100% test concentration. Number of theoretical plates was more than 2000 for both the drugs and tailing factor was less than 1.5 for both Nebivolol hydrochloride and Amlodipine besylate was reported. A resolution of greater than 2 was observed. The results were given in the Table 1.

FIG. 2: TYPICAL CHROMATOGRAM OF STANDARD SOLUTION OF 25µg/ml OF AMLODIPINE BESYLATE AND 50µg/ml OF NEBIVOLOL HYDROCHLORIDE

The peak areas corresponding to the concentration range of amlodipine besylate 5-25 mg/ml and nebivolol hydrochloride 10-50 mg/ml prepared in triplicate were plotted against the respective concentrations. The calibration curves were linear in the range studied for amlodipine besylate and nebivolol hydrochloride, respectively, with mean correlation coefficients (n = 3) of 0.999 and higher, the representative calibration curve was shown in Figure 3 and 4 respectively. The regression analysis was given in the Table 2. 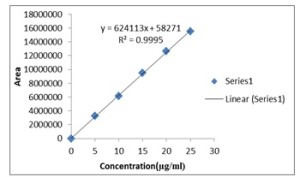 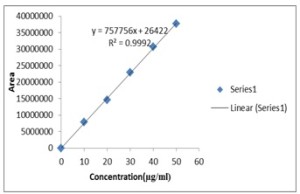 Accuracy of the method was examined by performing recovery studies by standard addition method for drug product. The recovery of the added standard to the drug product sample was calculated and it was found to be 97.9-103.44 %w/w and 98.9-103.1%w/w for Cinitapride and Pantoprazole respectively and the % RSD was less than 2 for both the drugs which indicates a good accuracy of the method. The results of recovery were given in the Table 3. The method was precise with a %RSD of less than 2 for both Cinitapride and Pantoprazole respectively. The results of intraday and inter day precision were given in the Table 4.

Assay of marketed formulation: A 20 µL injection volume of test concentration containing 25 µg/mL AMB and 50 µg/mL NBH solution was injected in triplicate to the chromatographic system and the peak response was measured. The content of each component in the formulation was estimated by comparing the peak area of the test sample with that of the peak area of the standard. The results of estimation were given in Table 6.

FIG 5: TYPICAL CHROMATOGRAM OF TEST SOLUTION OF 25µg/ml OF AMLODIPINE BESYLATE AND 50µg/ml OF NEBIVOLOL HYDROCHLORIDE

CONCLUSION: The proposed RP-HPLC method for the simultaneous estimation of nebivolol hydrochloride and amlodipine besylate in combined dosage forms is accurate, precise, linear, rugged, robust, simple and rapid. Hence the present RP-HPLC method is suitable as a quality control of the analysis of raw materials, formulations and in dissolution studies.

ACKNOWLEDGEMENT: The authors are thankful to the Mylan Laboratories Pvt. Ltd, Hyderabad and Yarrow Chem Products, Mumbai for providing the gift samples of Amlodipine and Nebivolol respectively and also to the management of Chebrolu Hanumaiah Institute of Pharmaceutical Sciences, Chowdavaram, Guntur for providing facilities and great support to carry out the research work.