A rapid, specific and accurate isocratic HPLC method was developed and validated for the assay of abacavir sulfate in pharmaceutical dosage forms. The assay involved an isocratic – elution of abacavir sulfate in Grace C18 column using mobile phase composition consists of (38:62 v/v) of methanol and 10ml of potassium dihydrogen orthophosphate. The wavelength of detection is 255nm.The method showed good linearity in the range of 10-50.0mg/mL. The runtime of the method is 8 mins. The proposed method can be used for routine quality control samples in industry in bulk and in finished dosage forms. In present study, a rapid specific precise and validated HPLC method for the quantitative estimation of abacavir sulfate in pharmaceutical dosage forms has been reported. The  developed  method can be  applied  to  directly  and  easily  to  the  analysis  of  the  pharmaceutical  tablet preparations. The percentage recoveries were near 100% for given methods. The method was completely validated and proven to be rugged. The excipients did not interfere in the analysis. The results showed that this method can be used for rapid determination of abacavir sulfate in pharmaceutical tablet with precision, accuracy and specificity.

INTRODUCTION:Abacavir sulfate [(1R)-4-[2-(amino-6-cyclopropylamino0-9H-purine-9-yl-2-cyclo-pentene]-1-methanol (Fig. 1). Antiretroviral drugs like nucleoside reverse transcriptase inhibitors, non nucleoside reverse transcriptase  inhibitors,  and  protease  inhibitors  are  essential  in  the  management  of  HIV infection. Abacavir, chemically known as [(1R)-4-[2-amino-6-(cyclopropylamino)-9H-purin-9-yl}-2-cyclo pentene]-1-methanol, is a carbocyclic synthetic analogue.  Its active metabolite carbovir triphosphate, an analogue of deoxyguanosine-5’-triphosphate (d GTP), inhibits the activity of HIV-1 reverse transcriptase both by competing with the natural substrate dGTP and by its incorporation into viral DNA. 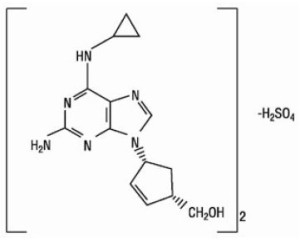 Carbovir triphosphate is an analogue of deoxyguanosine-5-triphosphate (dGTP).Carbovir triphosphate inhibits the activity of HIV-1 reverse transcriptase  (RT)  both  by  competing  with  the  natural substrate  dGTP  and  by  its  incorporation  into viral DNA. The lack of a 3-OH group in the incorporated nucleoside analogue prevents the formation of the 5    to 3 phosphodiester linkage essential for DNA chain elongation,   and   therefore,   the   viral DNA   growth   is terminated. It  has  been well  tolerated:  the  main  side  effect is hypersensitivity, which can  be severe,  and  in  rare  cases, fatal. Viral strains that are resistant to zidovudine (AZT) or lamivudine (3TC) are generally sensitive to abacavir, whereas strains that are resistant to AZT and 3TC are not as sensitive to abacavir. Abacavir tablets in combination with other antiretroviral agents are indicated for the treatment of HIV-1   infection.

Abacavir should always be used   in combination with other antiretroviral agents.  Abacavir should not be added as a single agent when antiretroviral regimens are changed due to loss of virologic response. It is available under the trade names Ziagen (GlaxoSmithKline) and in the combination formulations Trizivir (abacavir, zidovudine and lamivudine) and Kivexa /Epzicom (abacavir and lamivudine).

Several methods have been reported for the quantitative determination of abacavir sulfate in bulk and pharmaceutical and biological samples. These methods include UV-visible spectrophotometric 6-8 HPTLC 9, HPLC 10-18.

Calibration Standards and Quality Control Samples: A five point linear calibration curve standards were prepared using diluents solutions in the concentration range of 10 to 50.0µg/ml Calibration standards were prepared at the concentration of 10.0, 20.0, 30.0, 40.0, 50.0µg/ml from first standard stock solution 800 µL of the linear calibration standard and 25 µL of internal standard dilution and transferred into the auto sampler for analysis.

Three quality control samples were at the concentrations of 15µg/ml, 25.0µg/ml and 35.0µg/ml representing low, medium and high concentration respectively. The quality control samples were prepared from second standard stock solution. For the preparation of linearity curve calibration standards 800µg/ml is mixed with 25µg/ml of internal standard and transferred into auto sampler for analysis.

Sample Preparation: Commercially available tablets of abacavir sulfate are taken from two different brands and tested for assay. Twenty tablets of each brand are taken and crushed to powder. A powder equivalent to 50mg of abacavir sulfate is taken and transferred into a stoppered conical flask to which 25ml of water is added. The contents are transferred into a stoppered flask and shaken for 20 mins to extract the drug.

Contents are carefully transferred into a centrifuge tube and centrifuged for 3000 rpm for 20mins. The supernatant liquid is taken and diluted with diluents, to obtain approximately final concentration of 25µg/ml. This sample is analyzed in triplicate. The accuracy and concentration is determined using regression equation.

System Suitability: The system suitability was assessed by six replicate analysis of the drug at a concentration of 30µg/ml. The acceptance criterion is ± 1% for the per cent coefficient of the variation for the peak area and retention times for the both drug and internal standard.

Linearity (Calibration Curve): The calibration curve was constructed with eight concentrations ranging from 10.0 to 50.0µg/ml. The peak area ratio of the drug to the internal standard was evaluated by linearity graph. The linearity was evaluated by linear regression analysis, which was calculated by least square method. It is depicted in (Fig. 4).

Accuracy and Precision: Accuracy of assay method was determined for both intra-day and inter-day variations using triplicate analysis of the QC samples. Precision of the assay was determined by repeatability (intra-day) and intermediate precision (inter-day). Repeatability refers to the use of the analytical procedure within the laboratory over the shorter period of the time that was evaluated by assaying the QC samples during the same day. Intermediate precision was assessed by comparing the assays on different days (3 days).

Specificity: Specificity of the method was determined by injecting 3 samples;

Stability: The stability of the drug is determined by using QC samples for the short term stability by keeping at room temperature up to 12 hours and then analyzing them. Further, auto-sampler stability for up to 24 hrs and long-term stability unto 30 days were also established.

However, good resolution, less tailing and high theoretical plates are obtained with Varian column C18 150X5.0cm. The mobile consists of 38:62(v/v) methanol and 1% ortho phosphoric acid. The flow rate of the method is 0.9 ml/min. Diluents is prepared in the same way as mobile phase which consist of (38:62 v/v) methanol and 0.1% orthophosphoric acid. The wavelength of detection is 255 nm.

The column temperature is maintained at 25oC. At the reported flow rate peak shape was excellent, however increasing or decreasing the flow rate increased the tailing factor and resulting in poor peak shape and also resolution between the drug and internal standard also decreased. Hence 0.9 ml/min was optimized flow rate decreasing the consumption of the mobile phase, which in turn proves to be cost effective for long term routine quality control analysis.

System Suitability: The % RSD of the peak area and the retention time for both drug and internal standard are within the acceptable the range (Table 1). The efficiency of the column was expressed as the number of theoretical plates for the six replicate injections was around 21795±261 and the USP tailing factor was 1.22±0.008 and the resolution between the internal standard and drug is 6.0±0.046.

Determination and Quantization Limits (Sensitivity):  Fig. 2 and Fig. 3 represent the six replicate injections of the limit of detection and limit of quantification. The method is found to be sensitive which can be determined from the data obtained from Table 2 and Table 3.

Linearity: The calibration curve constructed was evaluated by its correlation coefficient. The peak area ratio of the drug and internal standard was linear, and the range, is 2.01 and 50.20 µg/ml. The linearity was determined in three sets, the correlation coefficient (R2) was consistently greater then 0.999 (Table 4). From the data in Fig. 4 and Table 4, regression equation, limit of quantification and limit of detection was determined from the calibration curve method.

Accuracy and Precision: Accuracy and precision calculated for the QC samples during the intra- and inter-day run are given in Table 5. The intra-day (day 1) and inter-day accuracy ranged from 98.05 to 100.46. The results obtained from intermediate precision (inter-day) also indicated a good method precision. All the data were within the acceptance criteria.

Robustness study: Robustness is the measure of method capacity to remain unaffected by deliberate small changes in the chromatographic conditions. The experimental conditions were deliberately altered to test evaluate the robustness of the method. The impact of flow-rate (0.9±0.1), column temperature (25oC±5oC) changes and effect of mobile-phase composition (±10%) was evaluated on the important system suitability factors such as retention time, theoretical plates, tailing factor, and resolution were studied. The experimental results were presented in the (Table 7).

Each mean value is a result of triplicate analysis (n=3)

TABLE 5: INTRA-DAY AND INTER-DAY PRECISION AND ACCURACY OF HPLC ASSAY OF ABACAVIR SULFATE

Each mean value is a result of triplicate analysis (n=3)

TABLE 7: EFFECT OF VARIOUS PARAMETERS IN ASSESSMENT OF METHOD

Each value is a result of triplicate analysis.

CONCLUSIONS:  The method gave accurate and precise results in the concentration range of 10.0 to 50.0µg/mL. The mobile phase composition is (38:62 V/V) methanol: 1% ortho phosphoric acid, at the flow rate of 0.9 ml/min. The retention times of internal standard and the drug are 6.8 ± 0.3 and 2.6 ±0.3 respectively. The column is a 150 X 4.6mm C18 column with the particle size of 5µm.A rapid sensitive and specific method for the determination of Abacavir sulfate in the pharmaceutical formulations has been developed using nevirapine as the internal standard.