VARIATIONS IN PHENOLICS, ANTIOXIDANT AND PHYTOCHEMICAL COMPOSITION OF SALVADORA PERSICA IN TWO LOCATIONS

VARIATIONS IN PHENOLICS, ANTIOXIDANT AND PHYTOCHEMICAL COMPOSITION OF SALVADORA PERSICA IN TWO LOCATIONS

ABSTRACT: Phenolic extracts of crude oil and methanol extracts of defatted seed cake were used to evaluate total phenolics, flavonoids content and antioxidant activity for two locations. The seeds were evaluated for their proximate composition while oils were subjected to chemical analysis. Salvadora persica had highest phenolics ranged from 12.3 ± 0.3 to 22.3 ± 0.3mg GAE/g and flavonoids content 3.7 ± 0.6 to 6.2 ± 0.2mg CAE/g. The antioxidant activity having IC50 value ranged from 0.024 ± 0.0 to 0.045mg/ml. The highest oil content as 42.5 ± 0.4% and highest protein content was 23.3 ± 0.3%. The oil content of the seeds recorded the highest iodine value 112.0 ± 0.8g/100g. The seeds were found to be rich in Ca, K, Na and P. The dominant fatty acids found in the oils were myristic and palmitic acid.

INTRODUCTION: Salvadora persica Linn. (family - Salvadoraceae), commonly known as tooth brush tree, is a branched evergreen small tree. In Hindi it is called as Pillu. It is distributed mainly in tropical regions of Asia and Africa. The Salvadora persica plant contains many biologically active compounds such as steroids, volatile oils, tarpenoides, saponins, and carbohydrates 1, 2. Traditionally, the branches of this plant are widely used as toothbrush in the Middle East, Africa and India to relieve toothache. Leaves are used as mouthwash and also used as purgatives for curing asthma and cough. Roots of this plant were found to contain Salvadourea, which is a urea derivates 3.

It contains large amount of alkaloidal compounds including trimethylamine 4, which has a motivating effect on the gums and sulphur like compounds and antibacterial activity 5. The root and bark contains resin and traces of alkaloids called Salvadoricine 6. Fruit contain a large amount of sugar fat and alkaloid. Leaves contain salvadoricinea indole alkaloid, flavanoids 7, 8, 9.

MATERIALS AND METHODS: Dry pods of Salvadora persica were gathered from field area of CCS HAU, Hisar and district Palwal, Haryana, India. The seeds were expelled from their pods and ground to powder form utilizing electric granulating machine. The powdered seed was utilized for analysis.

Chemicals: The chemicals utilized for the analyses were from Ranbaxy Merk and Qualigens, of most elevated immaculateness. Oil substance will be determined by Soxhlet strategy utilizing petroleum ether (60 - 80 °C) for 8 h.

The compound attributes of seed oil will be resolved by AOAC standard method 10.

Method: Two gram powdered sample of the seeds was processed with 15 ml of di-acid blend (5HNO3: HClO4) in a conical flask by warming on hot plate in open space till clear white hastens settle down at base of conical flask. The encourages were broken up in 1% HCl arranged in double distilled water, sifted and last volume of filterate 50 ml made with double distilled water and examination was finished by (AAS) atomic absorption spectrometer.

Carotenoids: Determination of total carotenoids was done by the method 12.

Total Phenolic Content: The phenolic substance was determined by the technique of Folin-Ciocalteu reagent 13.

Data Analysis: The trial was completed in triplicate and results were determined as mean of three replicates ± standard deviation. Quantifiable was completed utilizing Microsoft Excel 2007.

Carotenoids Content: Colour in oil is mainly due to the presence of carotenoid pigments and/or chlorophyll pigments. Carotenoids protect cells against the effect of light, air and sensitiser pigments having the ability to quench singlet oxygen and can also serve as antioxidants under conditions other than photosensitization 16. Some crude oils can have unexpectedly high pigmentation caused by field damage, improper storage, or faulty handling during crushing, and extraction. Carotenoid value determined in oils of the seeds studied in Palwal and Hisar locations were 67.3 ± 0.4 and 65.3 ± 0.3 mg/kg. The highest was in Palwal while lowest in case of Hisar shown in Fig. 1. Carotenoid is a type of antioxidant, higher value of this indicates higher antioxidant activity. 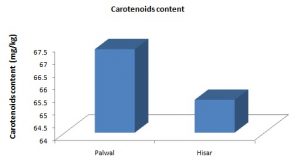 Total Phenolics Content: Plant phenolics are optional metabolites which are naturally aromatic and are highly antioxidants in view of their capacity to inhibit the free radicals and active oxygen. It is wonderful that phenolic substances contribute to the antioxidant activity of plant materials.

Really phenolics show significant free radical-inhibition activity. In this way, the measure of aggregate phenolics in two areas (Palwal and Hisar) of Salvadora persica was determined. Our findings showed that the substance of aggregate phenolics of Salvadora persica of two areas were highest in the methanol extract of defatted seed cake 20.2 ± 0.2mg GAE/g to 22.3 ± 0.3mg GAE/g as compared to phenolic extract of seed oil 12.3 ± 0.3mg GAE/g to 14.0 ± 0.2mg GAE/g, this might be because of variou s agroclimatic conditions shown in Fig. 2.

Flavonoids Content: Flavonoids are presumably the most essential class of characteristic phenolics and can give electrons or hydrogen molecules promptly, so they can directly rummage responsive oxygen species. They are additionally antioxidants referred to go about as radical scavenger and as metal chelators. Along these lines, the flavonoids of Salvadora persica (two locations) were resolved. The TFCs are communicated as far as catechin equivalent (CE) and are introduced in Fig. 3.

Total Tocopherol: Tocopherols are characteristic antioxidant, which are available in every vegetable oil in various sums that assume a key part in saving oil from rancidity amid capacity in this manner delaying its time span of usability. Tocopherols go about as natural criminals of free radicals and could counteract infections, other than having an imperative nutritious capacity for people as a wellspring of Vitamin E 17, 18. The tocopherol substance of nourishments is critical to ensure sustenance lipids against autoxidation and, in this way to build their capacity life and their esteem as wholesome nourishments. The tocopherol content in the phenolic extracts of seed oil of Salvadora persica two areas (Palwal and Hisar) were 18.8 ± 0.5mg/g to 19.2 ± 0.2mg/g and in methanolic extracts of defatted seed cake were 16.3 ± 0.4mg/g to 18.9 ± 0.3mg/g. In comparision of total tocopherol in unrefined oil and methanol extracts of defatted seed cake, we found that there were small difference of aggregate tocopherol content between seed oil and seed cake (Fig. 4). 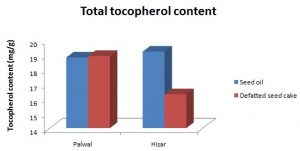 DPPH Free Radical Scavenging Activity: 2, 2'- diphenyl-1-picrylhydrazyl radical is one of only a handful few stable and financially accessible natural free radical (DPPH•), regularly utilized as a part of assessment of radical scavenging movement of natural and manmade antioxidants compounds 19, plant extracts 20 and foods 21. Alcoholic arrangements of DPPH• have a trademark absorption maximum at 517nm. At the point when an electron or hydrogen ion giving cancer prevention agent (AH) is added to DPPH•, a diminishing in absorbance at 517nm happens because of the arrangement of the non-radical shape DPPH-H which does not ingest at 517nm. This response is measured by de-shading test where the diminishing in absorbance at 517nm delivered by the expansion of the cancer prevention agent to the DPPH• in methanol or ethanol is measured. 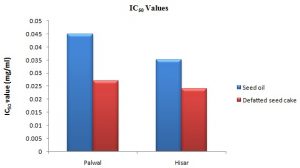 The antioxidant activity in terms of (IC50) displayed by phenolic extract of seed oil of Salvadora persica of two locations were 0.035 ± 0.0mg/ml to 0.045 ± 0.0 mg/ml and in methanolic extracts were 0.024 ± 0.0mg/ml to 0.027 ± 0.0 mg/ml. Our perception in both the locations higher in seed oil as compared to seed cake appeared in Fig. 6. Higher polyphenolic content compares with higher cell reinforcement action which may be because of the joined activity of present substances in factor fixations and their hydrogen iota giving capacities. In any case, the higher extremity dissolvable portions were not the most dynamic as the radical searching action of a specific cell reinforcement relies on upon structure and in addition on the kind of response kinetics 22.

Composition of Seeds: Minerals are required to initiate many enzymic responses inside the body. Life is needy upon the body's capacity to keep up harmony between the minerals 23. The mineral contained in these seeds contemplated may assume imperative part in sustenance. Magnesium, calcium and potassium in the human were required for building red platelet and for body instrument 24.

The healthfully essential minerals of seeds are introduced in Table 2. The seeds of Salvadora persica (Palwal and Hisar) contained critical measure of vital minerals as Calcium 128.0 ± 1.6 mg/100g and 136.0 ± 1.9mg/100g, potassium 380.0 ± 2.4mg/100g and 135.0 ± 2.0mg/100g, sodium 215.0 ± 1.3mg/100g and 224.0 ± 1.0mg/100g, remaining are in lower concentration which is appeared in Table 2. Calcium assumes a noteworthy part in CNS work. Calcium is fundamental for nerve motivation conduction and enacts a few compounds which create neuro-transmitters. Phosphorus is fixing to calcium in bone structure and assumes a critical part in CNS work. Numerous proteins contain as a base phosphoproteins. Phospholipids are included in nerve conduction. Phosphate is the essential particle in additional and intracellular liquid. It helps absorption of dietary constituents, keep up the blood at a somewhat antacid levels, directs protein action and is included in the transmission of nerve driving forces 25.

Fatty Acid Composition: For fatty acids composition first converted into their respective volatile esters by trans- esterification, i.e. by converting them from glycerol esters to methyl esters. The esters are then identified and quantified by injecting the processed samples into GLC and by comparing with chromatographic patterns of a set of standard esters. The important major fatty acid in Salvadora persica two locations (Palwal and Hisar) myristic acid 54.0 ± 0.3% and 55.5 ± 0.8%, palmitic acid 20.2 ± 0.4% and 19.3 ± 0.2% (Table 4). It was also observed that proportion of fatty acids were different among the oils of the seeds obtained from the two locations. The fatty acid profile of the seed oil generally exhibited dominant of two class MUFAs and PUFAs. MUFAs have been paid attention during past decades due to the beneficial effects on cardiovascular heart disease 26. A MUFA rich- diet tends to decrease low density lipoprotein- cholesterol 27.

In this study the seeds and oils of Salvadora persica have been evaluated for proximate and chemical composition. The results of the proximate analysis revealed the presence of high amounts of oil content, fibre and protein in the seeds. So it is used as feed and food formulations. In the seed oil of Salvadora persica, myristic acid and palmitic acid together constitute more than 74% in both locations. The oil will be very useful in soap industry as they augment leather forming property as well as its stability. The overall studied concluded that it also acts as a good source of natural antioxidant.

ACKNOWLEDGMENT: We are thankful to the University of CCS HAU, Hisar (India) for continued support of our work and also greatfully thanks to Dr. M. K. Deen.

CONFLICT OF INTEREST: There is no area of conflict of interest.