METHODS: Swiss albino rats weighing around 150 g – 250 g of either sex were randomly selected and divided into 6 groups (n=6) for 3 models, each having control and  Standard .

RESULTS: The following observations were made. Indomethacin exhibited potent anti-inflammatory activity in Carrageenan induced edema model (83.34% inhibition in mercury plethysmograph) compared to control. But its anti-inflammatory activity is of lower order both in turpentine induced arthritis & cotton pellet granuloma model (48% & 40.16% inhibition respectively). All the results obtained were statistically significant with P< 0.001 in all four investigated methods

INTRODUCTION: Pain and inflammation are disabling accompaniments of many medical illnesses. So, control of both pain and inflammation assumes top priority for the physician to reduce morbidity & mortality. Inflammation is a local response of living mammalian tissues to the injury. It is a body defence reaction in order to eliminate or limit the spread of injurious agents. There are various components of an inflammatory reaction that can contribute to the associated symptoms and tissue injury like oedema formation, leukocyte infiltration and granuloma formation 1.

Acute and chronic inflammatory diseases are still one of the most important health problems in the world like  trauma, infective arthritis, acute gout and  Rheumatoid arthritis, Osteoarthritis respectively. Although  there are several selective & non selective drugs  avilable to treat pain and inflammation in above mentioned disorders, most common agents used are the NSAID’s.

But there is continuous search for newer NSAIDs with less adverse effects as the existing drugs are very efficient in controlling the inflammatory reaction but associated with many adverse effects.

The initial phase results in the release of histamine and serotonin causing vasodialation and increased permeability of capillaries; whereas the release of bradykinin, prostaglandins, protease and lysosomal enzymes which regulate the process of adhesion of molecules is attributed to the second phase 5, 6, 7, 8. Subcutaneous injection of carrageenan into the rat paw produces accumulation of plasma and fluid and plasma protein exudation also takes place along with neutrophil extravasations 9.

The early phase of inflammation begins immediately after carrageenan injection and extends up to 6 h whereas the late phase remains up to 24 h.

In turpentine oil induced joint edema, there are some sequential release of mediators i.e. histamine and serotonin in the early phase, kinin like substances  in the intermediate phase and prostaglandin in the late phase 10. Cotton pellet granuloma model is indicative of proliferative phase of inflammation involving macrophages, neutrophil, fibroblast cells and collagen formation 8.

Unfortunately a promising drug under evaluation cannot be screened against all available models of Experimental Inflammation and also a promising drug/ herbal product with anti-inflammatory activity  can be easily , quickly & economically   screened  with the help of these  animal experimental models of inflammation before these drugs are subjected for characterization, mechanism of action (molecular, cellular, markers etc.),  which are fairly expensive.

Drugs and Chemicals: Indomethacin 10mg/kg BW (Sigma), carrageenan (Sigma) and all other chemicals were of analytical grade.

Animals: Adult albino rats of either sex weighing between 200 to 250 gms were randomly selected from central animal facility, JSS Medical College, Mysore. Animals were housed  at an ambient temperature of 25+ 1o C with ad libitum access to food and water. The care and maintenance of the animals were as per the approved guidelines of the Committee for the Purpose of Control and Supervision of Experiments on Animals (CPCSEA) in India. The study protocol was approved by Institutional Animal Ethical Committee.

Grouping of animals:  The animals were subjected to the following experiments:

Animals were divided into two groups for each model (control and test) consisting of 6 animals in each group.

Where, Vc and Vt represent the average paw edema volume in the control and drug treated groups, respectively.

Where, Dc and Dt represent the mean lateral diameter of knee joint in the control and drug treated groups respectively.

The rats were anaesthetized lightly with ether and small linear incisions of about 1 cm were made in each axilla and groin under aseptic precautions. The sterile cotton wool pellets weighing 10mg each were implanted in these areas (4 pellets in each rat) and the wounds were sutured with black silk thread with aseptic precautions 13, 14. The animals were maintained in clean cages and the food and water were allowed throughout the period of experimentation.

Later the animals were sacrificed on the 8th day and the cotton pellets with granulation tissue were removed, cleaned of the extraneous tissue and dried in a hot air oven to a constant weight. The dry weight of the granuloma (i.e. the amount of actual granulation tissue formed) was calculated by noting the difference in the dry weight of the cotton pellets recorded before and after implantation.

Where, Wc and Wt represent the mean dry weight of granuloma in the control and drug treated groups, respectively.

The level of statistically significant difference was defined as P<0.001. All the statistical methods were carried out through the SPSS for Windows (version 16). 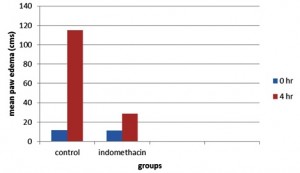 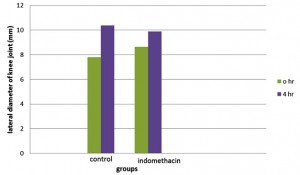 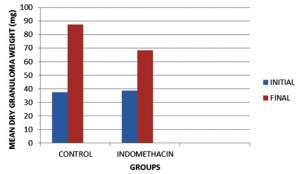 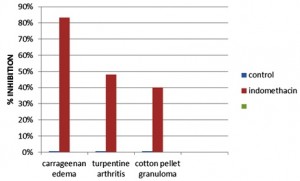 Indomethacin being a nonselective inhibitor of cyclooxygenase (COX) 1 and 2, enzymes that participate in prostaglandin synthesis from arachidonic acid. Prostaglandins are hormone-like molecules normally found in the body, where they have a wide variety of effects, some of which lead to pain, fever, and inflammation. Prostaglandins also cause uterine contractions in pregnant women. Indomethacin is an effective tocolytic agent, able to delay premature labour by reducing uterine contractions through inhibition of PG synthesis in the uterus and possibly through calcium channel blockade.

Indomethacin has two additional modes of actions with clinical importance:

These additional effects also account  for its analgesic and the anti-inflammatory properties.

Carrageenan is regarded as an established phlogistic agent and edema induced by subplantar injection of Carrageenan in the rat hind paw is reported to have been inhibited by a number of steroidal and non-steroidal anti-inflammatory drugs 1.

In our study, it is shown that Indomethacin significantly reduced edema induced by Carrageenan. The percentage inhibition of paw edema being 83.34% compared to control. The mechanism of acute anti-inflammatory activity being inhibition of release of mediators like prostaglandins (prostaglandins being one of the  mediators  responsible for mediating inflammation induced by Carrageenan).

Effect of Indomethacin against turpentine oil-induced joint edema in rats showed that it inhibited  joint edema gradually  at 1, 2, 3 and 4  hr after treatment compared to control , the percentage of inhibition being 48%. As there are some sequential  release of the mediators in turpentine oil-induced  joint edema  apart from prostaglandins like histamine and serotonin, kinin like substances, indomethacin has shown  lesser percentage of inhibition than that of the Carrageenan induced edema model.

In the cotton pellet granuloma model, inflammation and granuloma develops during the period of several days . This model is an indication for the proliferative phase of inflammation. Inflammation involves proliferation of macrophages, neutrophils and fibroblasts, which are basic sources of granuloma formation 16.

Hence, the decrease in the weight of granuloma indicates that the proliferative phase  was effectively suppressed by Indomethacin the percentage of inhibition being 40.16%. This model is a widely used model for chronic inflammation which occurs by means of development of  proliferated cells in the form of granuloma. Indomethacin inhibits the granuloma formation by preventing granulocyte infiltration, generation of collagen fibres, fibroblasts and suppressing mucopolysaccharides 8.

Hence the study demonstrated that Indomethacin has not shown equal anti-inflammatory activity against all the experimental models of inflammation. The percentage of inhibition in Carrageenan induced rat paw edema being 83.34%, it is 48% in turpentine induced arthritis model and 40.16% in cotton pellet induced granuloma model, thus showing that the anti-inflammatory activity is different  in different models of inflammation.