The stem and root barks, leaves and seeds of Millettia pachycarpa Benth. are used for various medicinal purposes in Chinese and Mizo traditional practices. The plant extract reportedly showed potent vermicidal activity on cestodes. The ethanol extract of the root bark was tested against the poultry nematode, Heterakis gallinarum Schrank. In vitro treatment at 37±1°C revealed that a serial dose of the plant extract caused dose-dependent vermicidal effect on the worm (significant efficacy at P<0.05), except at the lowest dose (i.e. 5 mg/mL). A broad-spectrum drug albendazole also exhibited similar effect but with higher potency at all doses applied. The nematode treated with 80 mg/mL of the plant extract caused apparent destruction on the morphological structure, mostly of severe distortion in the cuticular organization throughout the body topography. Collapse of the lips and contraction of the body proper with prominent folding of the cuticle at the cephalic region were clearly discernible. At the posterior end were also extensive disintegration of the cuticle along with shrivelled cloacal mount and caudal papillae.

INTRODUCTION: Helminth parasites remain one of the major concerns in human health, particularly in developing countries where they inflict serious morbidity among children, and the principal cause of economic loss in livestock production. The problem is compounded by development of resistance in helminths to all kinds of antihelmintic drugs 1. Major efforts have been deployed in investigating medicinal plants to combat the pervasive helminth infections 2.

Millettia pachycarpa Benth. (Family: Fabaceae) is a leguminous perennial climbing tree native to south-east Asian region where it is used in various traditional practices. The root bark, seed and leaf are commonly used as a blood tonic, treatment of infertility, fish stupefying, anticancer and insecticidal agents 3, 4. A number of novel bioactive compounds is identified from the plant, of which barbigerone and isoflavones such as erysenegalensein E, isoerysenegalensein E, 6, 8-diprenylorobol, millewanins G and H, furowanin A and B, and auriculasin were all demonstrated to have antiestrogenic activity 5-7. Following the traditional usage of the Mizo tribes of north-east India, the extract of the root bark was demonstrated to have potent vermicidal activity against the cestode, Raillietina echinobothrida 8, 9. This study is the first attempt to examine the antinematodal activity of the plant against a poultry cecal roundworm, Heterakis gallinarum Schrank.

Plant Material: The fresh roots of M. pachycarpa were collected from the nearby forest of Aizawl, Mizoram, India. Identification and authentication of the plant material were reported earlier 8. The root barks were peeled off, thoroughly washed with deionized water, cut into small pieces, and dried in a hot air oven at 50°C. The dried parts were macerated to fine powder and then refluxed with ethanol (100 g/L) for 8 h at 60°C.

The solution obtained was filtered through Whatman filter paper (No. 1) and the solution was evaporated to complete dryness at 50°C. The ethanol extract was obtained as a deep brown powdered material, which was then refrigerated at 4°C until further use. 1 h prior to in vitro assay, a stock concentration of the extract, 80 mg/mL, was prepared by dissolving in 0.9% neutral phosphate-buffered saline (PBS, pH~ 7.1) supplemented with 1% dimethylsulfoxide (DMSO). Varying doses, viz. 5, 10, 20 and 40 mg/L, were then prepared by serial dilution of the stock solution using PBS with DMSO.

Chemicals and Drug: All chemicals used were of standard analytical grades, obtained either from Merck or S.D. Fine-Chemicals Limited, India, except where otherwise stated. Ethanol was supplied by Bengal Chemicals, Kolkata, India, and the reference drug albendazole (Zentel®) is a product of GlaxoSmithKline Pharmaceutical Limited, India.

Recovery and Treatments of Nematodes: Native bred live chickens (Gallus domesticus Linn.) were obtained from the local abattoir in Aizawl, Mizoram, India. They were sacrificed and upon immediate necropsy, H. gallinarum were recovered from the cecum. Guidelines of the institutional Animal Care and Use Committee were observed. The worms were washed gently with and collected in PBS and then maintained at 37 ± 1°C in a digital glass-chambered incubator. The fresh worms were directly introduced to the serial doses (5, 10, 20, 40 and 80 mg/mL) of the plant extract. Similar treatment with corresponding doses was performed for albendazole. The control experiment consisted of nematodes maintained in a medium containing only PBS with 1% DMSO. Each medium was made in 5 replicates. Death was substantiated when complete immobility was noted upon dipping the parasites in tepid PBS (~45°C) that induced movement in sentient worms.

Scanning Electron Microscopy: A set of nematodes from each of the plant extract-treated and control media were washed in PBS, and then fixed in 4% formaldehyde at 4°C for 24 h. After post fixation in 1% buffered osmium tetraoxide for 1 h, the worms were dehydrated through ascending concentration of acetone. Following the standardized method of Roy and Tandon for helminth parasites 9, the specimens were treated with tetramethylsilane for 10 min and then allowed to dry at room temperature (25±2°C). The specimens were placed on metal stubs and sputter-coated with gold in a fine-coat ion sputter, JFC-1100 (JEOL), and finally observed under scanning electron microscope (JSM-5360) at an electron accelerating voltage of 20 kV.

Data Analysis: Data were presented as means plus or minus the standard deviation (SD) of the mean. Comparison of the mean values of the experimental treatments against those of the control group was made using unpaired Student’s t-test, and the level of probability considered significant when P < 0.05.

RESULTS: H. gallinarum in the control experiment survived for 97.73 ± 0.90 h in a medium composed only of PBS with 1% DMSO. The nematodes thrived relentlessly, but once their movement ceased, death ensued abruptly. Table 1 presents the response in physical activity of the nematodes after treatment with a broad-spectrum antiparasitic drug, albendazole, and the extracts of M. pachycarpa at the doses of 5, 10, 20, 40 and 80 mg/mL, respectively. Albendazole was found to be a highly effective nematocide exerting profound dose-dependent activity at all doses tested. The plant extract also indicated concentration-dependent efficacy on the nematode. However, at the lowest concentration, i.e. 0.5 mg/mL, the nematodes did not show any significant mortality with respect to the control, although average death was observed earlier than those in control group. Figure 1 shows the comparative efficacy of the drug and the plant extract, depicting dose-dependent activity for both cases. 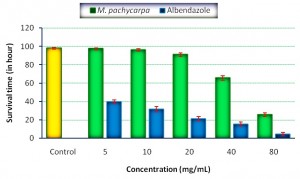 FIG. 1: COMPARISON OF THE EFFICACY OF ALBENDAZOLE AND THE EXTRACT OF M. PACHYCARPA ROOT BARK ON THE SURVIVAL OF H. GALLINARUM

TABLE 1: EFFECTS OF ALBENDAZOLE AND THE EXTRACT OF M. PACHYCARPA ROOT BARK ON THE SURVIVAL OF H. GALLINARUM

Scanning electron microscopy of the untreated nematode revealed prominent triangular mouth at the extreme anterior end, which is surrounded by three conspicuous lips having mouth cuticle. Sensory organs named labial papillae are situated on each lip (Figure 2a). The posterior end is structurally elaborate and complex in males than in females. The male tail is characteristically curved ventrally and studded with numerous sensory caudal papillae, (Figure 2b). 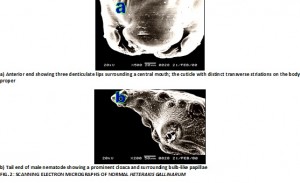 The nematode treated with 80 mg/mL of the plant was selected as it indicated the most elaborate structural alterations. At the anterior end, all the three lips showed signs of loosening and collapse, with conspicuous aberrant wrinkles all over the surface (Figure 3a). Cuticular contraction extended throughout the body, and the tail region of the male showed collapse of the cloacal mount due to shrinkage of the cuticle and disappearance of the papillae (Figure 3b). 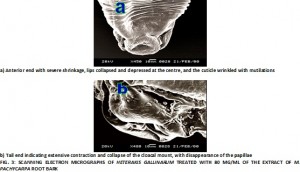 However, further studies on the actual antihelmintic effects on the worms are scanty. The cuticle of nematodes is a complex proteinaceous layer that is metabolically active and specialized to perform selective absorption of nutrients, secretion of glycoproteins for immuno-protection, osmoregulation and (insofar as it supports sense organs) sensory reception. Consequently, passive diffusion through the cuticle is the principal mechanism by which antihelmintic compounds enter the nematode body 16. Apparently, it has been firmly documented that one of the hallmark effects of any antihelmintic is the direct destruction of the worm’s surface 17, 18. Indeed a number of antihelmintic agents have been shown to act on nematodes by causing structural alterations most notably on the cuticle.

Albendazole reportedly caused severe damage on the cuticle of Trichinella spiralis upon in vivo treatment 19. Surface distortion and loss of regular cuticular annulations were also observed on Brugia malayi 18. Adult Wuchereria bancrofti subjected to albendazole and diethylcarbamazine combination therapy exhibited swollen cuticle, formation of spherical and spike-like projections at the anterior region, and leaf-like expansion on the general cuticle 20. Angiostrongylus contonensis also developed severe shrinkage and formation of rounded leaf-like expansions on the cuticle throughout the body after in vivo treatment with imidacloprid and moxidectin combination 17. Cysteine proteinases isolated from different fruits were shown to cause wrinkles and folds of the cuticle, often followed by blistering and gradual digestion of the cuticle on different nematodes 21-23.

Extensive deformity on the cuticle, lips, body striations and musculature were observed on Ascaridia galli after treatment with the extract of Acacia oxyphylla stem bark 24. Tribendimidine also caused severe disruption of the cuticle and intestinal epithelium in Necator americanus 26. Cyclosporin A caused massive disorganization of the cuticle in Trichinella spiralis 27.

Morphological alterations due to M. pachycarpa on H. gallinarum in the present study are most probably a common primary antihelmintic action whereby cuticular organization is the prime target. However, the active principle of the plant and its mode of action at physiological level remain uncertain.