Categories Menu
Home » VERSATILITY OF BENZIMIDAZOLE AND ITS DERIVATIVES; AN INSIGHT

VERSATILITY OF BENZIMIDAZOLE AND ITS DERIVATIVES; AN INSIGHT

VERSATILITY OF BENZIMIDAZOLE AND ITS DERIVATIVES; AN INSIGHT

ABSTRACT: Benzimidazole, a fused heterocyclic moiety containing benzene and imidazole, has gained considerable attention in the field of medicinal chemistry due to its wide array of pharmacological activities. Be it as a antifungal, anticancer agent, proton pump inhibitors, anthelmintic, anti-microbial, analgesic, it has become an intrinsic part of the pharmaceutical world. The presence of Nitrogen in its heterocyclic ring has made it a more biologically active pharmaceutical agent. The fact that benzimidazole residue is a constituent of vitamin B12 supports its potential use in therapeutics. Benzimidazole derivatives are the structural isosters of naturally occurring nucleotides such as purine, allow them to interact effectively with the biopolymers of the living system such as proteins, enzymes, and receptors. Benzimidazoles exhibit significant activity as a potential anti-tumour agent, smooth muscle cell proliferation inhibitors, a treatment for intestinal cystitis, and in a diverse area of medicinal chemistry. The synthesis of novel benzimidazole derivatives remains as the main focus of medicinal research. This current review covers the chemistry and significance of benzimidazole and its derivatives, also helps to develop the derivatives of benzimidazole in this antimicrobial-resistant era.

INTRODUCTION: Benzimidazole resembles the structure of Purine. This was discovered by Woolley in 1944. This lead to the further development of the benzimidazole moiety 1. Looking at the nature and importance of this moiety it was thought that it would be worthwhile to design and develop some new benzimidazole derivatives which consist of oxadiazole moiety and screen their biological activity. Over the few decades of active research, it has been proved that Benzimidazole, as an important pharmacophore can show a large range of antibiotic effects and also fight against a huge number of bacteria 2.

Based on the biological activity of the drug, they are classified into the following types.

2. Ramprasad J et al., have prepared a new series of imidazo (1, 3, 4) thiadiazole-benzimidazole derivatives. The synthesized compounds were screened for antitubercular activity. It had been found that most of the derivatives showed anti-tubercular activity with a MIC of 3.125mg/mL. 5-chloro- 2- (6-(4-methoxyphenyl)-2-p-tolylimidazo [2,1-b][1,3,4]thiadiazol-5-yl)-1Hbenzo[d]imidazole (2) was the most potent derivative. 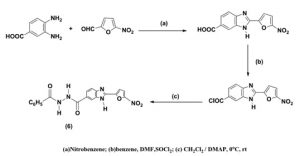 7. Desai NC et al., have synthesized benzimidazole bearing 2-pyridone motifs and evaluated for their in-vitro antibacterial and antitubercular activity. All compounds were also examined for their cytotoxic study on VERO cell line. Compound 1-((1-(1H-benzo[d]imidazol- 2yl)ethylidene)amino)- 6- ((3-chlorobenzylidene)amino)- 4- (4-nitrophenyl)- 2-oxo-1,2dihydropyridine-3,5-dicarbonitrile (7) was proved to be the most potent antitubercular agent.

8. Jadhav GR. et al., have discovered a series of novel [1,2,4]-triazol-1-yl, clubbed fluorobenzimi-dazole derivatives. The compounds were screened for their in-vitro antibacterial and antitubercular activity against Mycobacterium tuberculosis H37Rv strain. It was observed that 2-(4-(1H-1,2,4-triazol-1-yl)phenyl)-4,6-difluoro-1-(3-fluorobenzyl)-1Hbenzo[d]imidazole compound (8) showed promising anti-tubercular activity.

10. Patel RV et al., 10 have synthesized a series of benzimidazole based 1,3,4-oxadiazoles derivatives and assessed them for their antimicrobial & antitubercular activity. The Nbenzothiazoyl acetamides series showed broad-spectrum antimicrobial & antitubercular potential. Amongst them 2-(5-((1H-benzo(d)imidazole-1-yl)methyl-1, 3,4-oxadiazol-2-ylthio)(4-methoxyphenyl)acetamide (10) showed most potent activity with MIC value of 6.25μg/mL. 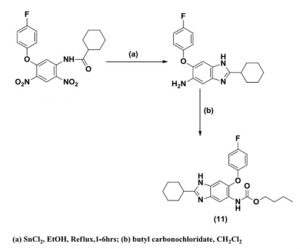 13. Gill C et al., 13 have reported novel (1,2,3) triazole clubbed with fluorine benzimidazole derivatives. These derivatives were evaluated for antitubercular activity. 1-((1-(2,4difluorophenyl)-1H-1,2,3-triazol-5-yl)methyl)-2-(3-fluorophenyl)-1H-benzo[d]imidazole (13) showed MIC value of 0.32μM, which was found to be better than the standard rifampin.

15. Paul K et al., 15 have generated new hybrids by combining the structural features of quinazoline and benzimidazole. Evaluation of these molecules was carried out against various cancer cell lines. The methoxy substituted compound (15) exhibited remarkable anticancer activity towards colon and prostate cancer cell lines with GI50 value of 0.34 & 0.31 µM respectively. 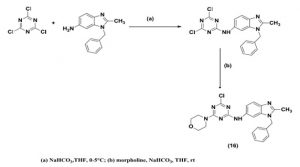 19. Shi L et al., designed a series of quinazoline and benzimidazole bearing fragments and identified them as dual c-Met and VEGFR-2 inhibitors. Among them N-(2-(4-fluorophenyl)1H-benzo[d]imidazol-6-yl)quinazolin-4-amine (19) exhibited the most potent inhibitory activity against c-Met and VEGFR-2 with IC50 of 0.05µM and 0.02 µM respectively. It also showed the highest anticancer activity against the cancer cell lines with IC50 of 1.5µM against MCF-7 and 8.7µM against Hep-G2. 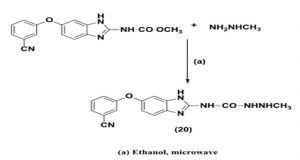 21. Guan Q et al., prepared a series of novel benzimidazole carbamates bearing indole moieties which were connected with sulphur or selenium atoms. The compounds were evaluated for their antiproliferative activities against three human cancer cell lines; SGC-7901, A-549 and HT-1080. Methyl 5-[(1H-indol-3-yl)selanyl]-1H-benzoimida-zol-2-ylcarbamate (21) showed the most potent antitumour activity. 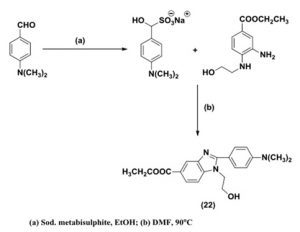 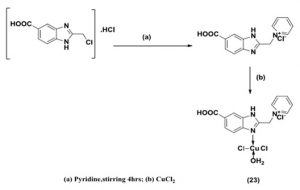 24. Coban G et al., synthesized several benzimidazole derivatives with substitution at 2 & 5 positions. They were screened to identify if they interfered with mammalian type I DNA topoisomerase activity via in-vitro supercoil relaxation assays. Some compounds were subjected to cytostatic assays using various cancer cell lines. Results showed that 5-chloro-2(2-hydroxyphenyl)-1H-benzimidazole (24) exerted the most profound topoisomerase I inhibition and cytotoxicity.

25. Abdel-Aziz H A et al., developed a series of 2-((benzimidazol-2-yl)thio)- 1-arylethan- 1- ones as potent anti-tumor agent that target both cancer stem cells and the bulk of tumor cells. They were evaluated for their antiproliferative activity towards colon HT-29 cancer cell line. 2-((1H-benzo[d]imidazol-2-yl)thio)-1-(2, 3, 4-trimethoxy-phenyl)ethan-1-one (25) was the most active anti-proliferative analog with 50.11±4.05 % inhibition effect.

30. Gowda J et al., prepared a series of benzimidazole derivatives carrying quinolone moiety by one step process, which included nucleophilic substitution and cyclization. They were evaluated for their anti-bacterial activity. The compound with nitro group at the 5-position of the benzimidazole moiety; 2-(5-nitro-1H- benzimid-azole-2-yl) thieno [2,3-b]-quinoline (30) displayed good antibacterial activity.

31. Eisa HM et al., prepared a series of benzimidazole derivatives fused with oxadiazoles and triazoles. The synthesized compounds were screened for antimicrobial activity. Among them 1-[(5-methylthio-3,4-oxadiazol-2-yl)methyl]-2-benzyl-thio-1H-benzimidazole (31) exhibited significant activity.

32. Petkar K et al., prepared a series of 2-chloromethyl-1H-benzimidazole derivatives and screened them for their anti-fungal activity against Candida albicans. 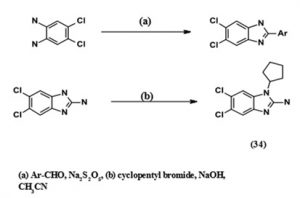 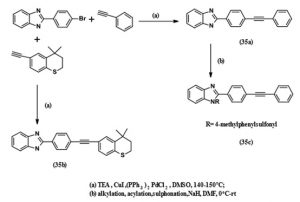 36. Zhu W et al., synthesized some 5-nitro benzimidazole with 1,4-disubsituted or 1,5-disubsituted indole derivatives and screened them for their novel angiotensin II receptor antagonist activity. The results revealed that 2-(4-((2-butyl-5-nitro-1H-benzo[d]imidazol-1yl)methyl)-1H-indol-1-yl)benzoic acid (36) displayed a high affinity for the angiotensin II type 1 receptor with IC50 value of 1.03 ± 0.26 nM. 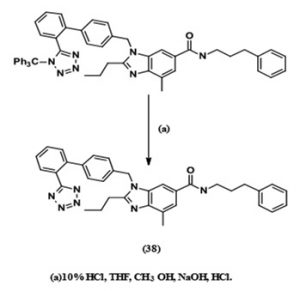 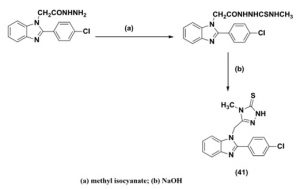 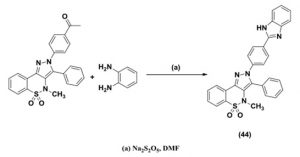 45. Pérez-Villanueva J et al., synthesized a series of new 2-{[2-(1H-imidazol-1yl)ethyl]sulfanyl}-1H-benzimidazole derivatives (45). The novel compounds were tested against various species of protozoa; Trichomonas vaginalis, Giardia intestinalis and Entamoeba histolytica. The antiprotozoal evaluation revealed strong activity for all tested compounds, with IC50 values in the nanomolar range, which were even better than the standard metronidazole drug. 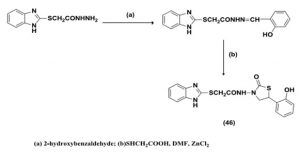 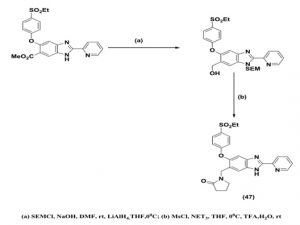 48. Xue F et al., have synthesized a series of novel benzimidazole derivatives and evaluated for their antiviral activity. Strong activities against entero-virus were observed in these benzimidazoles. The most promising compound was (L)-2-(pyridin-2-yl)-N-(2-(4nitrophenyl)pentan-3-yl)-1H-benzimid-azole-4-carboxamide (48) with a high antiviral potency (IC50 = 1.76 l μg/mL) and a remarkable selectivity index of 328.

51. Loudfy H. Makaur discovered the Inhibition of Corrosion of copper in nitric acid by benzimidazole and its derivatives. The inhibitive performance of seven synthesized 2-(2-benzimidazolyl)-4 (phenylazo) phenol (BPP_1–7) derivatives was investigated experimentally on the corrosion of copper in 2.0 M HNO3 acid using mass loss, thermometric and DC potentiodynamic polarization techniques. 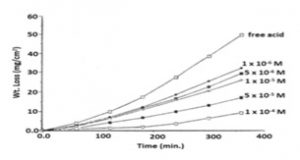 FIG. 1: VARIATION OF WEIGHT LOSS AGAINST TIME FOR COPPER CORROSION IN 2.0 M HNO3 IN THE PRESENCE OF DIFFERENT CONCENTRATION OF BPP_1 AT 303 K

52. Elif Apohan synthesized fourteen novel cobalt (II) or zinc (II) complexes of benzimidazoles from the 1-(4-substitutedbenzyl)-1H-benzimidazoles and CoCl2.6H2O or ZnCl2. Cytotoxic activities of novel complexes were investigated against lung cancer cells (A549) and BEAS-2B.

53. Mohammad Nikpassand has synthesised novel azo-linked 2-phenyl benzimidazoles using ionic liquid. In this research, novel series of benzimidazoles were synthesized using the reaction between various synthetized salicylaldehydes, and naphthalene2,3-diamine or 1,2-diaminobenzene in the presence of a catalytic amount of 3,3-(butane-1, 4diyl)bis(1, 2-dimethyl- 1H-imidazole-3-ium)Br by a one-pot procedure without additional organic solvents and oxidants.

In conclusion, he has developed a simple, convenient and efficient protocol for the synthesis of 2-phenyl benzimid-azoles using ionic liquid as an efficient catalyst [BDBDMIm]Br. The simplicity, easy workup, together with the use of inexpensive, environ-mentally friendly, and reusable catalyst, is the notable features of this catalytic procedure. To the best of knowledge, this is the first report for the synthesis of a new library of benzimidazole compounds bearing azo linkage moiety that enhances the biological activity.

54. Lianhai Yau has synthesized tricyclic benzimidazole-iminosugars as potential glycol-sidase inhibitors via a Mitsunobu reaction. A series of tricyclic benzimidazole-iminosugars 1(a-f) and 2(a-f) were constructed through the intramolecular cyclization of NH and OH by the key Mitsunubo reaction, providing an effective protocol for the preparation of the tricyclic iminosugars. Three compounds derived from D-ribose exhibited specific and good inhibitory effects on β-glucosidase.

CONCLUSION: It can be concluded from the present review study that Benzimidazole is a very promosing hetrocyclic ring structure possessing various activities and I believe that more studies such as DNA interaction studies, metal complex chelation and in-vivo animal studies can be carried out this versatile moiety.

ACKNOWLEDGEMENT: The author acknow-ledges Principal KLE College of Pharmacy, Belagavi for providing the facilities and my students Mr. Varun and Ms. Shreya, who extensively searched the data available on Benzimidazoles.

CONFLICTS OF INTEREST: The authors confirm that the contents of this review article bear no conflict of interest.