Vaccine development has continuously shifted away from live attenuated or inactivated whole organisms. Although this approach having good efficacy but for improvement on comparison of risk/benefit ratio which needs improvement due to their highly complex compositions which result in safety concerns. As a consequence, a number of indications remained unadressed. The next generation vaccines represented as subunit vaccines, whereby the only pathogens fragments used which are relevant in inducing protective immunity. For the successful subunit vaccination two major key requirements are safe carrier and adjuvant system, since the small, isolated pathogen fragments themselves are generally weak immunogens. Pevion’s virus-like particle (VLP) vaccine technology, called virosomes, and their design is specifically for the development of safe and effective subunit vaccines. Virosomes based vaccination has already been approved in more than 40 countries, including for elderly and infants. It is successful in solid regulatory & safety track record as well as the feasibility of production upscaling. The outstanding profile with combined efficacy and safety of virosomes-based vaccines are known for its origin in the unique mode of action of these multifunctional particles. It leads to a comprehensive induction of a complete immune response, in contrast to single-sided triggers. Virosomes are reconstituted viral envelopes that can serve as vaccines and as vehicles for cellular delivery of macromolecules.    The prospect of drug delivery and targeting using virosomes is an interesting field of research and development. As virosomes are biocompatible, biodegradable, nontoxic, and non-autoimmunogenic, and various attempts have been made to use them as vaccines or adjuvants as well as delivery system for drugs, nuleic acids, nucleic acids, or genes for therapeutic purposes. The virus of choice is influenza virus. Virosomal drug delivery depends on the methods used to prepare the encapsulated bioactive material their incorporation into the virosomes, and followed by the characterization and formulation of the finished preparations. This technology can potentially be used to deliver peptides, nucleic acids or genes, and drugs like antibiotics, anticancer agents, and steroids. In this paper reviewed about the advantages of virosomes in successful delivery of immunogens.

INTRODUCTION: The transfer of genes to target cells by various delivery vehicles are mainly divided into viral and non-viral vectors systems. Viral vectors are obtained by replacement of one or more viral genes by a gene of interest and are considered to be the most efficient transducing system 1, 2. Their efficiency relates to properties of the viral capsid proteins or membrane glycoproteins, such as the ability to bind to cellular receptors and to pass through or fuse with cellular membranes. But the safety of viral vector system remains a matter of major concern, and issues related to insertion mutagenesis as observed with retroviruses 3 and the induction of undesirable immune responses and inflammation 4, 5 still pose major challenges.

For non-viral gene delivery, chemical approaches (e.g. cationic lipids, cationic polymers, and nanoparticles) and physical methods (e.g. gene gun, electroporation) are being employed 6. Cationic liposomes are the most extensively studied vehicles (reviewed in 7-10). In these systems, cationic lipids condense DNA through electrostatic interactions with the negatively charged phosphate groups of the nucleic acid, thereby forming so-called lipoplexes. With respect to in vivo use, liposomal delivery systems combining the characteristics of cellular interaction of viral vectors with the safety of liposomal delivery systems. Virosomes are the reconstitutes viral envelopes, having lipid membranes, viral spike glycoproteins, but absence of viral genetic material.

Externally virosomes resemble that of a virus particle, with spiky proteins protruding from their membrane, and their interior compartment is empty. Almeida et al., were the first to prepare Virosomes, who inserted purified influenza spike proteins into preformed liposomes.11 Virosome technology is developed in order to overcome the problem of incomplete delivery to target cells, tissues, and organs. The new generation of therapeutics against cancer or neurodegenerative disorders which require the delivery system that target drugs to specified cell types and host tissues by receptor-mediated uptake and controlled release.

Thus, the virosomal technique represents a novel sophisticated delivery system to meet all the above challenges and drawbacks. There after a wide range of viral envelopes have been reconstituted, including those of sendai virus 12 and sindbis virus.  Because virosomes display viral envelope glycoproteins, which in their native conformation stimulate humoral responses. Moreover, since the receptor-binding and membrane-fusion properties of the viral envelope glycoprotein can be preserved, virosomes can be used as transport vehicles for cellular delivery of biologically active macromolecules. In this article, we provide a brief overview of virosomal drug delivery. Overall, virosomes protect pharmaceutically active substances from proteolytic degradation and low pH within endosomes, allowing their contents to remain intact when they reach the cytoplasm. This is a major advantage of virosomal carrier systems over other drug-delivery vehicles, including liposomal and proteoliposomal carrier systems.

Fusion Activity of Virosomal Carriers: Virosomes has the unique properties of fusion because of the existence of influenza HA in their membrane. HA is responsible for the structural stability and virosomal formulation homogeneity, also significantly contributes to the fusion activity of virosomes. Virosomal HA promotes binding at the target cell surface followed by receptor-mediated endocytosis.

The acidic environment of the endosome responsible for stimulation of HA-mediated membrane fusion, and the therapeutically active substance escapes from the endosome into the cytoplasm of thetarget cell.  Thus, virosomal HA significantly enhances cytosolic delivery. Thus virosomes protect pharmaceutically active substances from proteolytic degradation and low pH within the endosomes before reaching the cytoplasm. This is a major advantage of virosomes over liposomes and proteoliposomal carrier systems, which provide less protection for therapeutic macromolecules from different compartmental unadoptable micro-environments 13, 14.

Method of formulating Virosomes: For virosome preparation, viral membrane-fusion protein such as HA-generally preferred fusion protein for virosomes which is either purifies from the corresponding virus or recombinantly produced using gene manipulations. For virosomes as a successful vaccine or delivery system, the major requirement is reconstituted membrane proteins that retain their immunogenic properties and those having receptor-binding and membrane-fusion activities.

After Solubilization: the viral nucleocapsid, containing endogenous viral genes, removed by ultra-centrifugation. The viral membrane reconstitution depends upon removal of C12E8 followed by its adsorption on a hydrophobic resin. In this method production of virosomes depends upon pH similar to that of native influenza virus. This method has inherent drawback particularly to maintain sterility as method involves batch processing, often in open systems. Compound encapsulated in virosomes adsorbed inactivated by the hydrophobic resin and difficulty in removal of low-CMC detergents & removal of detergent by dialysis can increase the above mentioned complications 16.

Various detergents with relatively high CMCs, such as N-octyl-D-glucopyranoside (octyl glucoside), that can effectively solubilize influenza virus envelopes. To overcome the problems encountered during dialysis are in process as many researchers are on novel detergents that can be completely removed by dialysis. This will be curical step for refining an effective dialysis procedure for industrial purposes 15.

Virosomes are assembled in a Controlled Manner:

FIG 1: SHOWING ASSEMBLY OF VIROSOME IN A CONTROLLED MANNER

Virosome Structure: Virosomes are spherical unilamellar vesicles with a mean diameter of around 150 nm. Influenza virus is most commonly used for virosome production.

Further characteristics of virosomes depend on the choice of bilayer components. Virosomes can be optimized for maximal incorporation of the drug or for the best physiological effect by modifying the content or type of membrane lipids used. It is even possible to generate carriers for antisense-oligonucleotides or other genetic molecules, depending on whether positively or negatively loaded phospholipids are incorporated into the membrane.

Various ligands, such as cytokines, peptides, and monoclonal antibodies (MAbs) can be incorporated into the virosome and displayed on the virosomal surface. Even tumor-specific monoclonal antibody fragments (Fab) can be linked to virosomes to direct the carrier to selected tumor cells 21.

TABLE 1: DIFFERENCE BETWEEN LIPOSOMES AND VIROSOMES

FIG. 3: HEMAGGLUTININ (LARGE TRIMERS), NEURAMINIDASE (BLACK TETRAMERS), AS WELL AS FAB’ FRAGMENTS WITH A SPACERARM ARE ANCHORED IN THE LIPID BILAYER OF VIROSOMES. 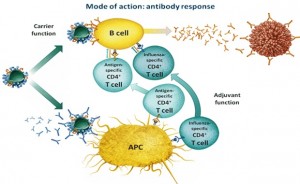 FIG. 4: MODE OF ACTION OF VIROSOMES 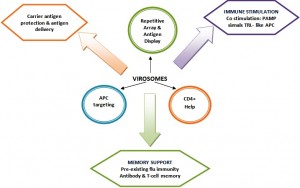 Functions by the Carrier: The integration of the antigen into the higher structures of the virosomes particle stabilize the antigens, preserves the native status of B cell epitopes, and protects the antigens from degradation. Moreover, the presentation of the antigen as a repetitive surface structure enhances its recognition by antibody-producing B cells.

Memory Support: The presence of influenza-derived hemagglutinin (HA) provokes a memory response, as a vast majority of people have a degree of natural, pre-existing immunity against influenza. This comprises both humoral and cellular immunity: pre-existing influenza-specific antibodies tag virosomes efficiently for rapid uptake and processing by antigen presenting cells (APC). Memory T helper cells rapidly proliferate and secrete cytokines to support and enhances the induction of effector immune cells.

Immune Stimulation: In addition to the influenza-specific antigens, virosomes provide pathogens-associated molecular patterns (PAMP) that deliver co-stimulatory signals to APC, which leads to a TLR-like activation.

Approaches to Drug-Delivery through Virosomes: