ABSTRACT: Atorvastatin calcium (ATC) is very slightly soluble in water and it is classified under BCS class II drugs. A widely used method to enhance the solubility of drugs is co-crystallization. In this work, we screened six co-formers for ATC by employing molecular docking method. The work was continued by co-crystallization process using slurry method, solubility assay of the mixtures using HPLC, and characterization of the co-crystal by PXRD, DSC and SEM. Based on molecular docking, the best co-former is aspartame (Ei = -4.70 kcal/mol). The docking result fits the solubility assay of the ATC-aspartame co-crystal (136.77% increasing of solubility compared to ATC). ATC-aspartame co-crystal shows better dissolution profile (91.62 % in 60 minutes) than ATC (73.54 % in 60 minutes). The characteristic peaks of ATC and aspartame were gone, whilst new peaks appeared after slurry process. The ATC-aspartame characterization by PXRD, DSC and SEM positively confirmed that the co-crystallization of ATC-aspartame using slurry method was successful

According to the Biopharmaceutical Classification System (BCS), ATC is classified under BCS class II drugs that exhibit poor aqueous solubility and high permeability. The intestinal permeability of atorvastatin is high at the physiologically intestinal pH (6–6.5). However, it is reported that the absolute bioavailability of atorvastatin is 12% after a 40 mg oral dose 1-3.

(downloaded as mol format from www.chemspider.com)

A widely used method to enhance the solubility of poorly water soluble drugs is co-crystallization. A co-crystal is a multi-component crystal which involves non-covalent interactions between API and its co-formers. There are several approaches or tools to predicting the formation of co-crystal between API and co-crystal former molecule (co-former), such as solubility-based approach, Hansen solubility parameter tool 1, or computational calculation by employing molecular docking method 4.  Previous studies showed that co-crystal of calcium atorvastatin was successfully formed using isonicotinamide 5 and natural or synthetic polymers 2, 6, 7 as co-formers.

In this work, we developed virtual screening of co-formers for ATC  by employing molecular docking method as proposed by Siswandi 4. AutoDock (The Scripps Research Institute) was used for docking. Parameters observed were type and energy (Ei) of interaction. The work was continued by co-crystallization process characterized by PXRD, DSC, FTIR and SEM. The solubility and dissolution rate assay of the mixtures were performed using HPLC.

2D structures of atorvastatin (Chem Spider ID: 54809) and its co-formers in .mol format were downloaded from www.chemspider.com. All molecules were geometry optimized using molecular mechanics method in Portable_Hyperchem_8.0. and calculated their QSAR properties using the same program. All .mol files of the molecules were converted into .pdb files by employing Open Babel GUI 2.2.3. The files then were opened in Auto Dock 4.2.3 and converted into .pdbq files by adding polar hydrogen and Kollman charges. The .pdbq files were converted into .pdbqt by calculating their torsion angles and were ready to be used for docking. The dimension of grid box was set to 40x40x40 Å3 and other parameters were set to default.  Docking was repeated 10 times for each co-former. Parameters observed were type and energy (Ei) of interactions.

Atorvastatin calcium 6.05 g and the best conformer according to in silico result, were carefully weighed and mixed homogeneously in a mortar. 15 mL of methanol was added to the mixture until it became slurry. The product was dried at 400 C for 48 hours. The solid product was stored in a desiccator under vacuum.

Characterization of the product:

Thermal analysis was performed using differential scanning calorimeter (Linseis, USA).  Under nitrogen flow of 20 ml/min, approximately 4‑4.5 mg of sample was placed in a sealed aluminium pan and heated at a scanning rate of 10°C/min from 30°C to 300°C. An empty aluminium pan was used as reference.

The analysis was carried out using scanning electron microscope (JSM 6100, Jeol, Japan). Atorvastatin and co-crystal of ATC-aspartame were mounted onto the stubs using double-sided adhesive tape and then coated with a thin layer of gold palladium alloy (150–200A°). The microscope was operated at an acceleration voltage of 20 KV, working distance (12–14 mm). The magnification was set ×500.

Solubility studies were performed according to the method described by Higuchi and Connors. The saturation solubility of pure atorvastatin calcium, ATC-aspartame, and aspartame  in water was determined by adding an excess of  the drugs  to 50 ml distilled water in conical flask and were rotated in a orbital shaking incubator for 48 h at 370C ± 0.50C. The saturated solutions were filtered through a 0.45 μm membrane filter, suitably diluted with water and analyzed by HPLC.

In vitro dissolution studies of pure ATC trihydrate and ATC-aspartame and physical mixture  were conducted with the USP type II apparatus (paddle type). The dissolution studies were performed using phosphate of pH 6.8 buffer as dissolution medium at 37±0.50C with 75 rpm speed. Samples of each preparation equivalent to 80mg of drug were added into the dissolution medium. The sample of 1ml aliquots were withdrawn periodically (5, 10, 15, 30, 45 and 60 min) and were quantified by HPLC. Detection was set at 246 nm.

Molecular docking proved that all co-formers only interacted with one ATC molecule, and the highest affinity to ATC was showed by aspartame (interaction energy = -4.70 kcal/mol). Of the six co-formers, only benzoic acid undergoes hydrophobic interaction as indicated by two π-π interactions. 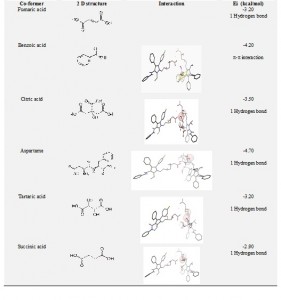 The selection of solvent used in the slurry method is very important, where the solvent should not be able to dissolve at least small portion of the parent’s components. Methanol was used as liquid phase in preparation of ATC-aspartame co-crystal because both compounds are soluble in it. During slurry process, the mixtures changed to amorphous phase and recrystallized rapidly. X-ray powder diffraction was used to monitor the co-crystallization. The presence of methanol as a liquid phase increases the rate of co-crystal formation due to enhancement of molecular diffusion.

The formation of co-crystals is primarily characterized by PXRD. If the resulting PXRD pattern of the solid product is different from the starting materials, it can be concluded that a new solid phase was formed.

The PXRD pattern ATC-aspartame co-crystal (blue) is showed in Fig. 2, which proves that the characteristic peaks of ATC (green) and aspartame (red) were gone, whilst new peaks (indicated by blue arrows in Fig.2) appeared after slurry process. The changes in the position of the peaks after co-crystallization process indicated that there was a formation of ATC-aspartame co-crystal in a 1:2 molar ratio.  Detailed information of the PXRD peaks is showed in Table 4.

*indicates the 2-theta position of the new peaks

Melting point is a fundamental physical property, which is determined  by  the  temperature  at  which  the  solid  phase  is  at equilibrium  with  the  liquid  phase.  DSC is the most preferred technique for obtaining comprehensive melting point data.

Fig.3 showed positively the presence of ATC-aspartame co-crystal, as proved by the dip (minimum) on the blue thermogram. This minimum or Tc (crystallization temperature) indicates the heat-off when crystals are formed. The continuous heating past its Tc will form another thermal transition that is Tm or melting temperature (Fig.3). ATC-aspartame melted at 168.30°C while ATC Tm was detected at 179.90°C. Further analysis using SEM was performed to differentiate and characterize the crystal of ATC-aspartame (Fig.4). Fig.4 shows the difference between aspartame, ATC, and ATC-aspartame.

ACKNOWLEDGEMENT: The authors would like to thank Directorate of Higher Education of Indonesia and Research and Development of Kimia Farma Tbk. Bandung for funding this project.