ABSTRACT: Background and aim: Spiroazetidin-2-ones and furans are commonly used as anti-bacterial, anti-fungal, anti-inflammatory, cardiovascular activities, anticancer, antiparkinson agents etc. The purpose of this study was to perform virtual toxicity studies of the synthesized compounds 1-(substitutedphenyl)-3-chloro-5,9-bis(furan-2-ylmethylidene)-1-azaspiro[3.5]nonan-2-ones (3a-3h). Materials and methods: Computational toxicology and mutagenicity profiles of these compounds were generated by using TOPKAT 6.1 (Toxicity Prediction Komputer Assisted Technology version 6.1). The molecular structure of the query compound was given as a SMILES string and a desired TOPKAT predictor was selected, then TOPKAT automatically conducts analysis of the query compound. Results: According to TOPKAT 6.1 model the compounds 3a - 3h are non-mutagenic and devoid of aerobic biodegradability. The computed Rat oral LD50 values for the compounds 3a - 3h ranged from 1.1g/kg to 115.0mg/kg. These high LD50 values suggest higher safety of these compounds. The computed probability of skin irritation for all compounds was found to be 1.000 and the probability for the carcinogenicity was found to be 0.950-1.000. Conclusion: By using computerized statistical methodology, more promising molecules can be identified. These studies provided us information for research to carry out an extensive study of novel spiroazetidin-2-one tethered with furan moieties for their toxicological profile.

INTRODUCTION: Spiroazetidin-2-ones and furans have emerged as an important class of drugs for the treatment of a variety of health conditions. The compounds having these nuclei are commonly used to treat health conditions which include anti-bacterial, anti-fungal, anti-inflammatory, cardio vascular activities, anticancer, antiparkinson agents etc. 1 - 7.

Drug design softwares like TOPKAT enable the discovery of lead molecules, more efficiently and quickly. Conventional synthesis and evaluation of drugs require number of animal sacrifices, use of this software helps in reducing the number of animal sacrifices made for the in vivo studies. TOPKAT accurately and rapidly assess the toxicity of drugs solely from their 2D molecular structure using a range of robust, cross-validated Quantitative Structure Toxicity Relationship (QSTR) models for assessing specific toxicological end points, thus providing a detailed data of query molecules which can be widely analyzed and compared with the existing molecular libraries. Use of QSAR softwares undoubtedly reduces the number of compounds synthesized there by providing with promising leads for further exploration. The rationale behind this work was to develop extensive toxicological profile of the derivatives containing 1-(substitutedphenyl)-3-chloro - 5, 9- bis (furan-2-ylmethylidene)-1-azaspiro[3.5]nonan-2-ones (3a - 3h) 8.

MATERIALS AND METHODS: The molecular structure of the query compound is given as SMILES string and a desired TOPKAT predictor is selected. If the structure is a member of training set, the database information for the compound is displayed. If the query does not belong to the training set, software displays the result with necessary warnings. Under these circumstances, caution in accepting the estimate should be exercised. Models which satisfy all the validation criteria for the query compound are computed and results are recorded 9 - 14.

Virtual toxicity studies have been done for the following set of compounds, substitutions for which is given in Table 1. 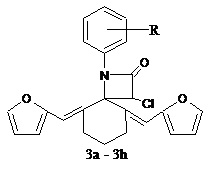 TABLE 1: SET OF COMPOUNDS FOR SCREENING

Evaluating an assessment: If we consider a TOPKAT assessment of a query structure as a hypothesis which states that the model parameters present in the query structure are the determinants of its toxicity, then this hypothesis can be tested against similar compounds in the model's database. The similarity search function in TOPKAT will automatically rank all the compounds in the respective model database based on their QSTR similarity to the query structure. Information regarding the actual experimental result, TOPKAT predicted result and whether the compound was used in training set is available for each compound. With this information whether the query structure lies in an information-rich region of the model data space and similar compounds are well predicted by the model is determined.

Computation of toxicity by TOPKAT: TOPKAT computes a probable value of toxicity for a submitted chemical structure from a Quantitative Structure-Toxicity Relationship (QSTR) equation. The equation is linear in the structure descriptors. The coefficients are optimized during the development of the equation. The product of a structure descriptors value and its corresponding coefficient is the descriptors contribution to the probable toxicity. Contributions from the products may be either positive or negative; a positive contribution will increase the probability of the chosen property, whereas a negative contribution will decrease it. Toxicity values are computed by summing the individual contributions. For assessing toxicity values such as LD50 or LC50, this sum is transformed into a weight/weight unit (mg/kg) or a weight/volume unit (mg/1); for 2-group classifications, such as carcinogens/non-carcinogens, this sum is transformed into a probability value between 0.0 and 1.0.

Query structure Examination: TOPKAT always outputs a value of toxicity; however, whether the assessment is meaningful or not can only be answered by:

These 2 steps are accomplished automatically in TOPKAT and results are output in terms of a confidence percentage.

Coverage Examination: Every QSTR model is associated with a certain training set of compounds, and these compounds contain a limited set of structural attributes. A QSTR model, when extrapolated to chemical structures containing structural attributes which are not represented in the training set, may produce unreliable toxicity assessments. Therefore, it is important to determine whether the structural attributes of the query molecule are represented in the compounds used for the development of a QSTR. TOPKAT automatically determines whether the input structure contains molecular substructures which are foreign to the training set (a univariate analysis). Additionally, during this process, TOPKAT compares the values of the model descriptors for the query structure to the range of the values of the respective descriptors in the training set compounds.

Optimum prediction space: As well as determining its coverage, TOPKAT checks whether a query structure is located inside or outside the Optimum Prediction Space (OPS) of a QSTR (multivariate analysis). The OPS of a QSTR is a multi-dimensional space, the number of dimensions being one more than the number of model parameters of the QSTR.

An important characteristic of the OPS is that within and near its periphery the QSTR may be applied with confidence. The OPS confidence contains information about both the Optimum Prediction Space and the fragment coverage. When a query structure is determined to be inside all dimensions of a model OPS, the computed value of toxicity can be considered acceptable (unless evidence exists to refute the assessment).

According to TOPKAT 6.1 model, the computed Rat oral LD50 values for the compounds 3a-3h ranged from 1.1g/kg to 115.0mg/kg. These high LD50 values suggest higher safety of these compounds. And Log P values of all 8 derivatives are well below 5.6. So Log P parameter of all the derivatives obey Lipinski's rule and fall well within the range of -0.4 to +5.6 (Table 2).

The compounds (3a-3h) were devoid of aerobic biodegradability. The structure descriptors contribute negatively to the assessment of confidence limits. All the derivatives resulted in very low computed probability and negative discriminant score values for Developmental Toxicity Potential (V 3.1).  Data is given in Table 3.

All the derivatives except 3b and 3e showed the computed probability value less than 0.7 and negative discriminant scores are not likely to produce a positive response in an experimental assay and negative contribution to the increase in the probability of chosen property which is carcinogenicity of female rat (V 3.2). Data is given in Table 6.

CONCLUSION: The success of previous generation of drugs and vaccines has lead to an increase in human life expectations. But it does not mean that all the molecules developed each year by random screening methodology are successful to provide new blockbuster drugs. So it is time to change the methodology for research from random screening to rationalized approach of drug design. By following the computerized statistical methodology, more promising molecules can be identified. This has provided us with some direction for research to carry out an extensive study of novel derivatives of Spiroazetidin-2-ones tethered with furans (3a-3h) for their toxicological profile.

ACKNOWLEDGEMENT: The authors are thankful to the management of Faculty of Pharmacy, M.S. Ramaiah University of Applied Sciences, Bangalore, India for providing necessary facilities.